Overview Of Temple Of Treasure Megaways

Temple Of Treasure Megaways is another new offering from Blueprint utilising the recently licensed Megaways engine from BTG. Blueprint are literally churning out these Megaways games faster than we can play them, however they all seem very polished games with super fine attention to detail on the graphics and sounds, as for the engine of the slot they have mastered it and like I’ve said many times before, I personally believe Blueprint have fine tuned BTG’s creation better than the creators, lets see if this disappoints although I highly doubt it will!

Temple Of Treasure Megaways is an all ways pay slot and has a 6 reel by up to 7 row setup giving you up to 117,649 ways to win and a cascade feature where winning symbols disappear and new ones fall onto the reels, basically exactly the same as Bonanza or Extra Chilli. During the base game there’s one random feature being the mystery symbols which can land on any reel and then vanish to reveal the same symbol, think of the mystery symbols in Primal Megaways, it’s exactly the same. 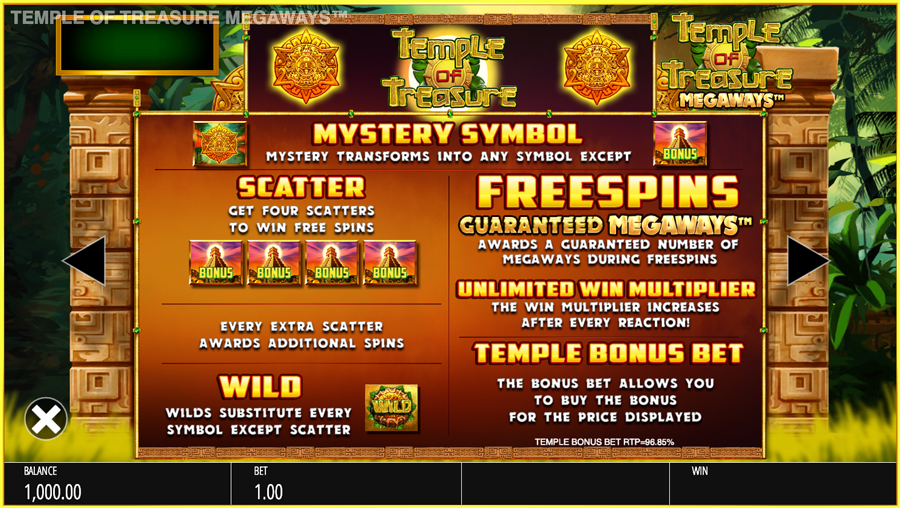 The main feature in Temple Of Treasure Megaways is the free spin bonus, you get this for landing 4 or more scatter’s the same as Bonanza or you have the more common option of buying the bonus for 100x your stake. The difference with Temple Of Treasure Megaways bonus to Bonanza is that you get to choose how many spins you want, you can have more spins at the expense of less Megaways or vice-versa. The three options are 15 spins with a minimum of 324 Megaways, 10 spins with a minimum of 2304 Megaways or the highest variance of the bunch which is 5 free spins and a minimum of 10’000 Megaways! 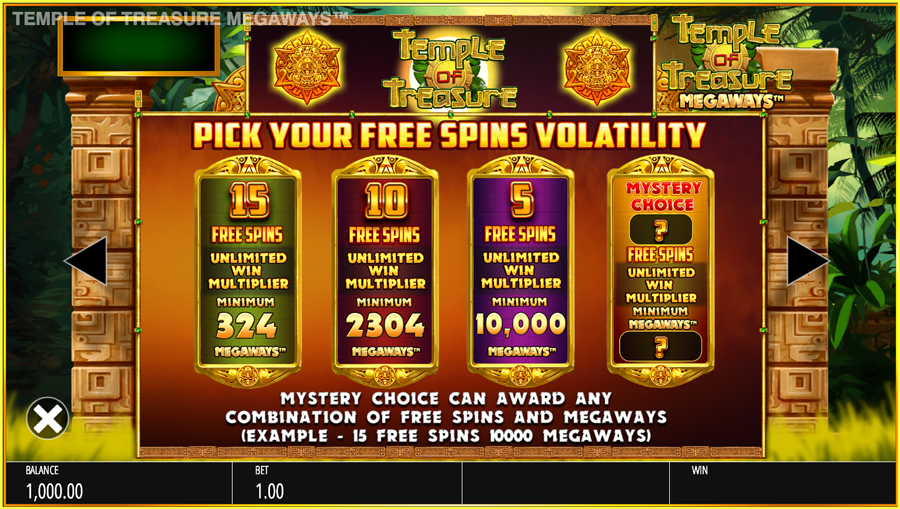 There is then one more option for the hardened gambler, the option to lucky dip the amount of spins with the minimum amount of Megaways with the fourth option, obviously if you chose this option you’d want the 15 spins coupled with the minimum 10’000 Megaways, most of the time you’re going to get binned off with 5 free spins and the minimum ways so bear in mind the gamble involved as this feature wont be the easiest to land! Once you’ve chosen your combination you start the free spins and each win cascade increases your multiplier by 1x and this has no cap exactly the same as Extra Chilli. During my test play I often got a multiplier in excess of 20x and I think on the right day this could go bonkers, 50 and 60x multipliers will be reported in the near future Im sure of it!

The paytable in Temple Of Treasure Megaways is the same as the other recent additions from Blueprint, straight forward and to the point with a simple multiple of your stake used to indicate the various win values, just how I like it! We start with the 9’s, 10’s and J’s which pay 1x per full way, Q’s, K’s and A’s pay 1.5x and the necklace pays slightly more at 2x your stake for a full way. 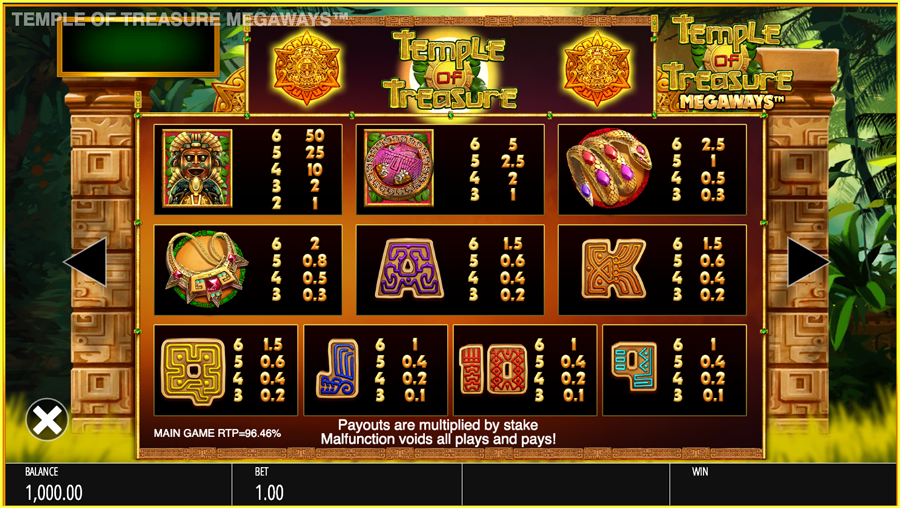 The golden snake pay’s 2.5x, the pink gem pay’s 5x and the Aztec character pay’s a huge premium of 50x per full way, looking into the documentation for this game the max win in the base game is 1800x which is 36 ways of the top symbol, should you get that combination in the free spins with say a 20x multiplier you’d be looking at a 36000x your stake win, to be honest I think I’d take it with a 2x multiplier! There’s an image of that setup below if you’d like to see what the maximum base game win looks like. 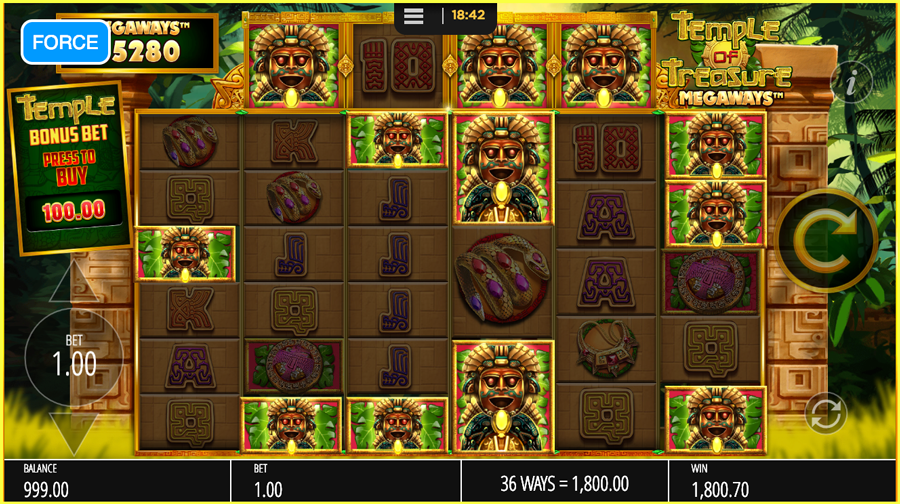 Temple Of Treasure Megaways has an RTP of 96.46% and its safely in the super high variance category with the sheer potential on offer in the bonus and even the base game for that matter. The sounds and graphics are sublime as with all of Blueprints latest offerings and they are quickly becoming my favourite slot provider, if you fancy giving it a go there’s a link below to a TGC approved casino, thanks for reading and I hope you get lots of Megaways!