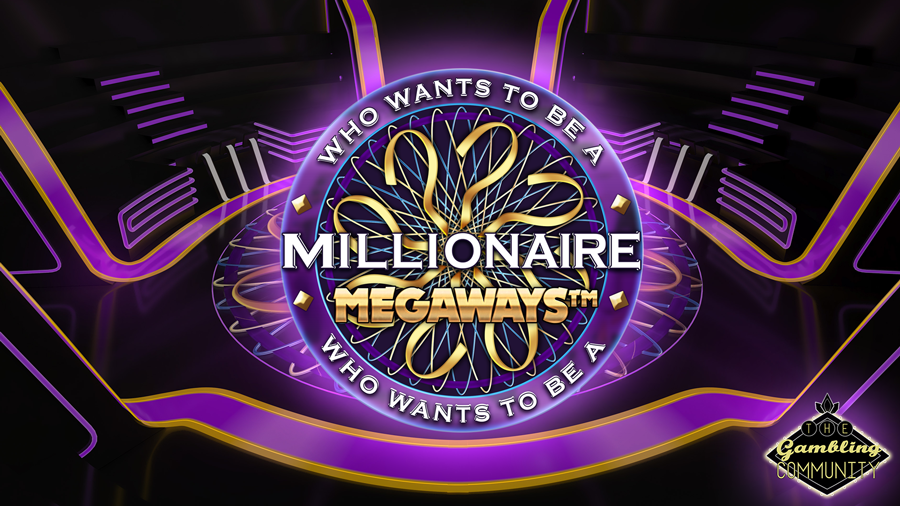 Overview Of Who Wants To Be A Millionaire

It’s that time again, Big Time Gaming have released a brand new slot and as usual the hype surrounding it’s release is huge, will it live up to expectations though? Is it better than Danger High Voltage? Can you actually win a million pounds? Does Chris Tarrant make an appearance at any point? Is the cheating Major on here coughing in the audience to give you the answers? Lets jump into the hot seat and see what it’s about.

Who Wants To Be A Millionaire has a 6 reel setup and uses the patented Megaways™ engine giving you up to 117649 ways to win, basically it has exactly the same setup as Bonanza and Extra Chilli but apparently the maths has been completely re designed so it’s not just a total clone of the aforementioned, there is also an extra space for reels 2,3,4 and 5 underneath the main reels like Extra Chilli. 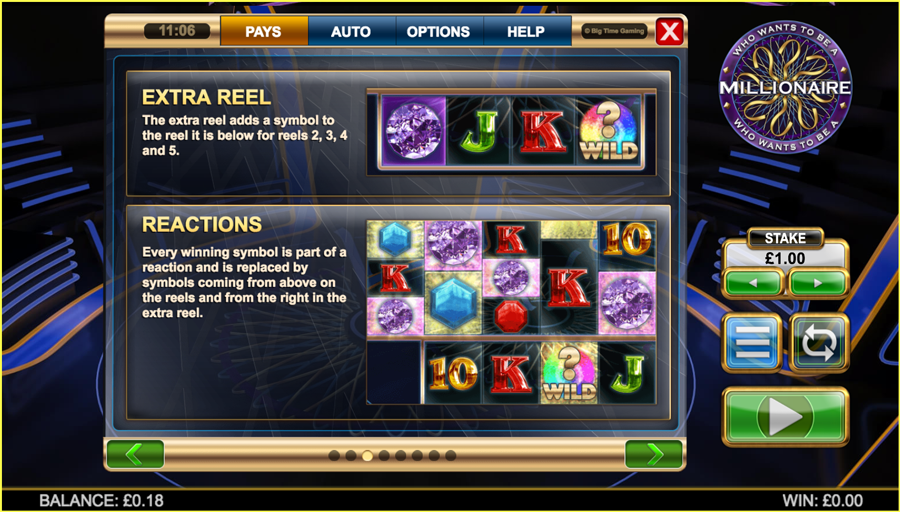 Every time you get a win the symbols vanish and the reels cascade down to fill the missing positions, this continues until there are no more winning combinations but Im sure anyone reading this knows exactly how that works so lets move onto the feature. 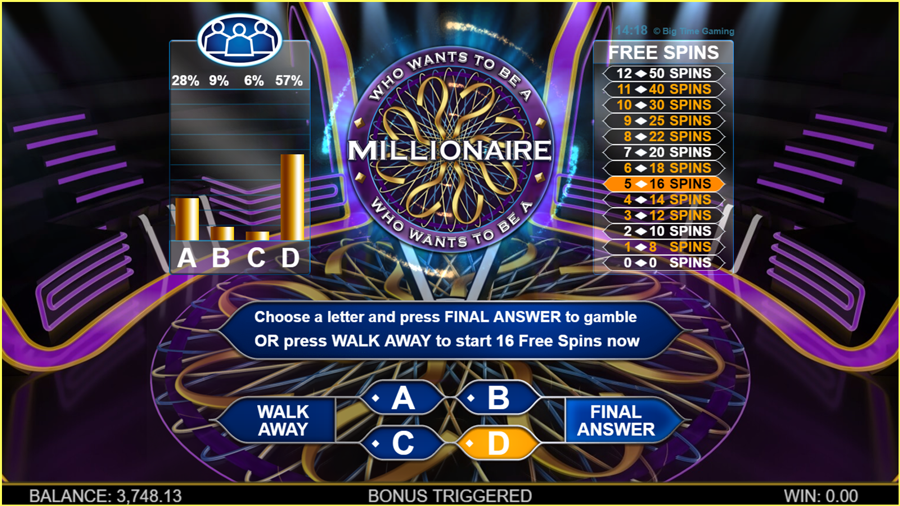 The main objective of the game is to land 3 of the Millionaire scatters to enter the bonus round, once you do this you are taken to the hot seat where you start with 8 free spins, if you got 4 or more scatters you start an extra position up the ladder. You are presented with 4 options and rather than a question as you’d expect, you get shown a lifeline and different percentages for each answer indicating which one to pick, each time you get a question correct you progress 1 rung up the ladder and if you get a question wrong you drop 1 position and the free spins start, rung 2 and rung 7 are safety nets so these are essentially risk free gambles. If you get the first question on 8 free spins wrong you get nothing and your back to the base game empty handed! 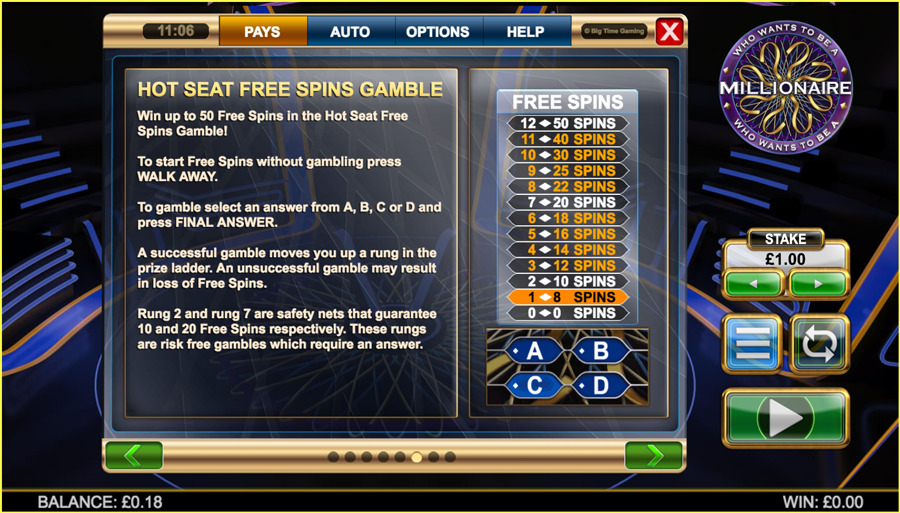 Delving into the general information for this game it states that the optimal strategy is to always select the answer with the highest percentage from the ask the audience lifeline and to always select the answer indicated by phone a friend, however Iv played enough rounds now to safely say this doesn’t feel like it makes a difference, you can have an answer being indicated as 87% correct and when you pick it, it turns out to be wrong! If ever a slot could tilt you more than Extra Chilli’s gamble wheel then this might be it, especially as you can’t buy the bonus and may have done a lot of spin’s just to get to the feature. So far Iv seen an answer that had 1% chance of being right be correct and yet the game was pointing you to pick the option of 91% chance, it just seems daft and makes you start to dislike the game! 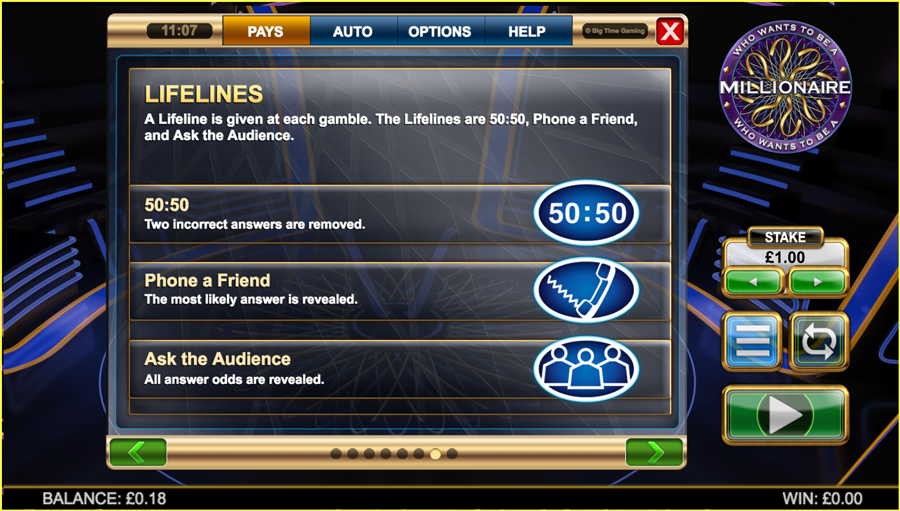 Once you start the freespin’s its the usual setup like Bonanza and Extra Chilli where each win adds 1x to the starting multiplier of 1x so with the almost unachievable 50 freespin’s and lots of wins along the way the multiplier could be stupendous.

Who Wants To Be A Millionaire Paytable

Now onto the paytable, the pays are displayed as multiples of your stake which makes everyones life easier and it’s something I think all providers should adopt, you can see the low paying letter symbols below pay very poor but were not here for letters, were here to be millionaires so lets swiftly move on! 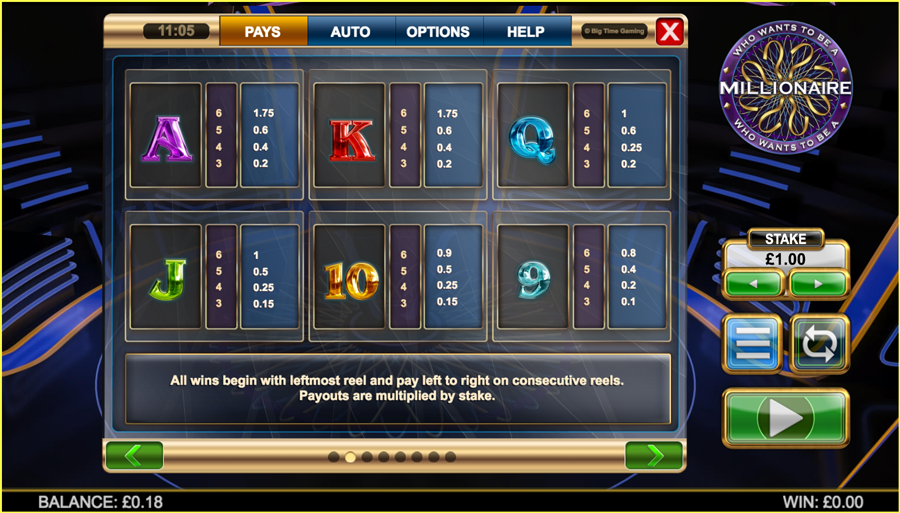 The 9’s pay 0.8x and the 10’s pay 0.9x your stake, the J’s and Q’s pay 1x and the K’s and A’s pay 1.75x, any of these symbols stacked on all reels with a nice multiplier would still return a huge win but on there own there pretty useless!

Moving onto the premiums we have the green and blue gems paying 2x, the red pays 7.5x and in true BTG Megaways™ fashion the Diamond pays a huge premium of 50x your stake, get a decent multiplier of say 20x in the feature and you can see how all of these symbols can return monstrous wins, especially as there all stacked on every reel. What’s the maximum win on this game you ask, I wouldn’t like to guess but based on the max stake of £10 per spin and the games “millionaire” name I can only surmise its 100’000x your stake, if it isn’t then its a pretty stupid theme to base the slot on! 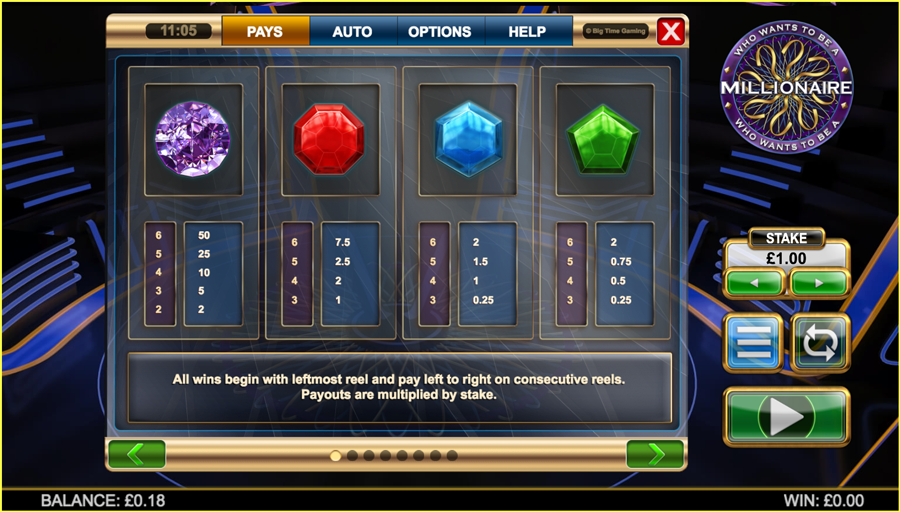 Final Thoughts On Who Wants To Be A Millionaire

Who Wants To Be A Millionaire has an RTP of 96.27% and Id class it in the super high variance category purely because the feature has 2 stages to it and quite often your going to lose before you even start with the first question, the graphics and sounds are well polished and it lives up to the win potential we’ve become accustomed too and expect with Big Time Gaming, that being the chance to win life changing money in one spin.

Is it better than Danger High Voltage? No it’s not and in fact it won’t be a game I’ll play often as the ladder gamble is simply ridiculous, it’s actually worse than the Extra Chilli pie gamble and that takes some doing! I understand they couldn’t actually put questions in for the gamble as we all have access to Google and it would be too easy but knowing that why even bother with the theme? Anyway thanks for reading and once it’s released at casino’s that TGC trust I’ll put a link below for you to try yourself, hopefully you have a better experience than me!

Click here to play Who Wants To Be A Millionaire

This s a very good review. Your decision not to play the game is absolutely righter on the money. The game promises but does not deliver. There is nothing worse than a bonus that can be taken away !!