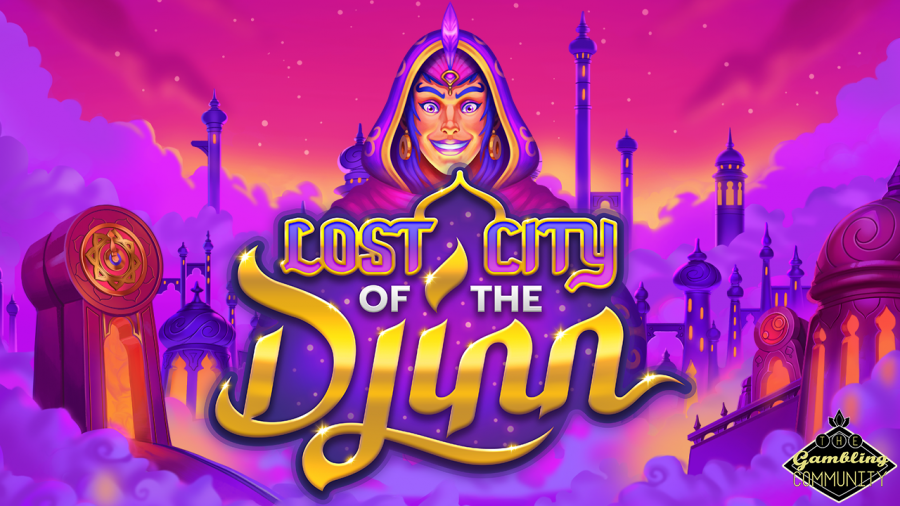 Overview Of Lost City Of The Djinn

In this thousand and one night slot, untold riches and mysterious adventure await you in the ruins of the Lost City of the Djinn! Find the magical lamp to free the Djinn and his powers to make all your wishes come true! With a Massive Mystery symbol, a Bonus Game with free spins, and a Djinn Spins game with a Pattern Collect feature, an Upgrade feature and a Copy feature, this magical slot is crammed with win potential! 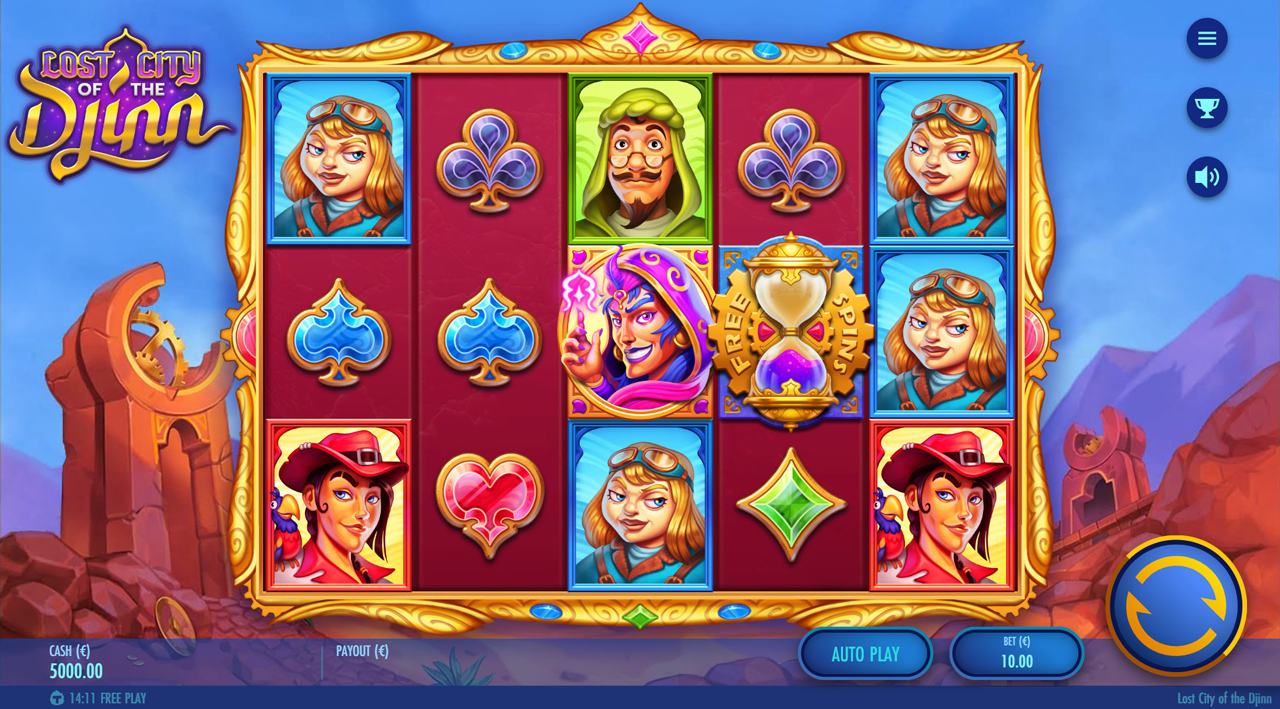 Lost City Of The Djinn has a 5 reel setup with 25 fixed pay lines and 3 different features. The first feature we’ll take a look at is the Massive Mystery Symbol in the base game, it’s a 3×3 symbol that randomly transforms into any other symbol other than the Free Spins Scatter symbols. It only occurs on reels 2-4. 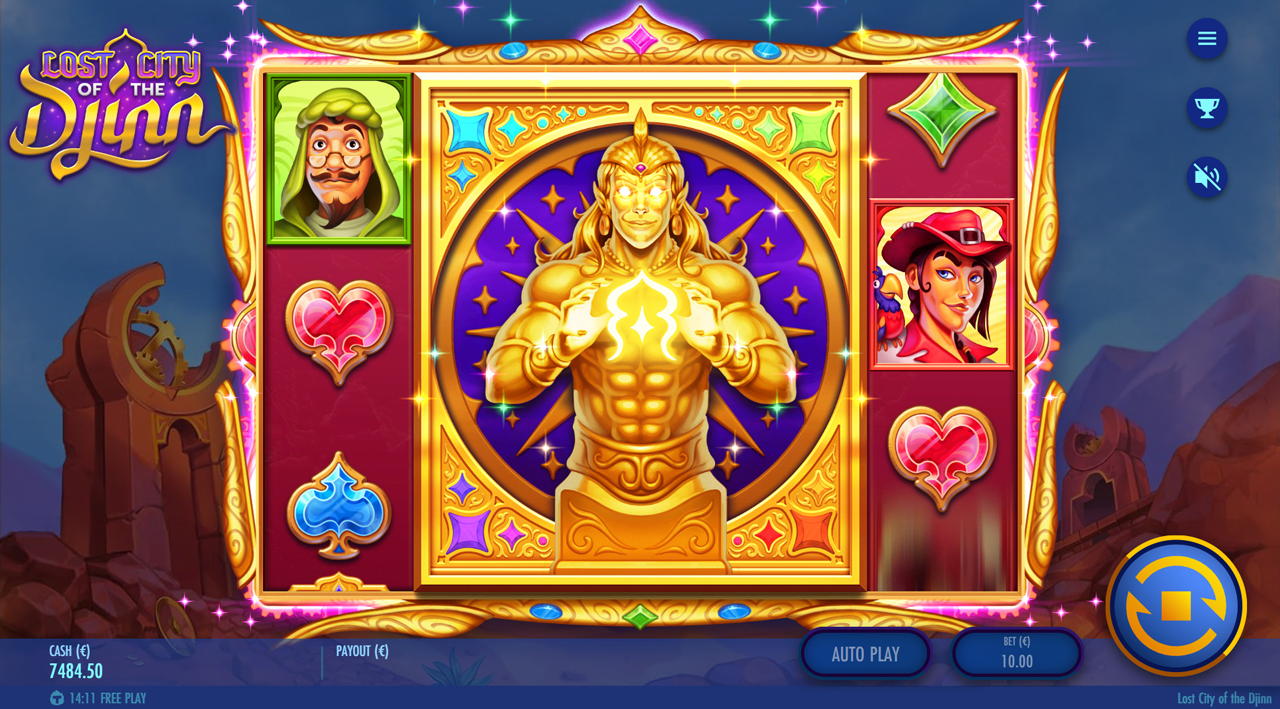 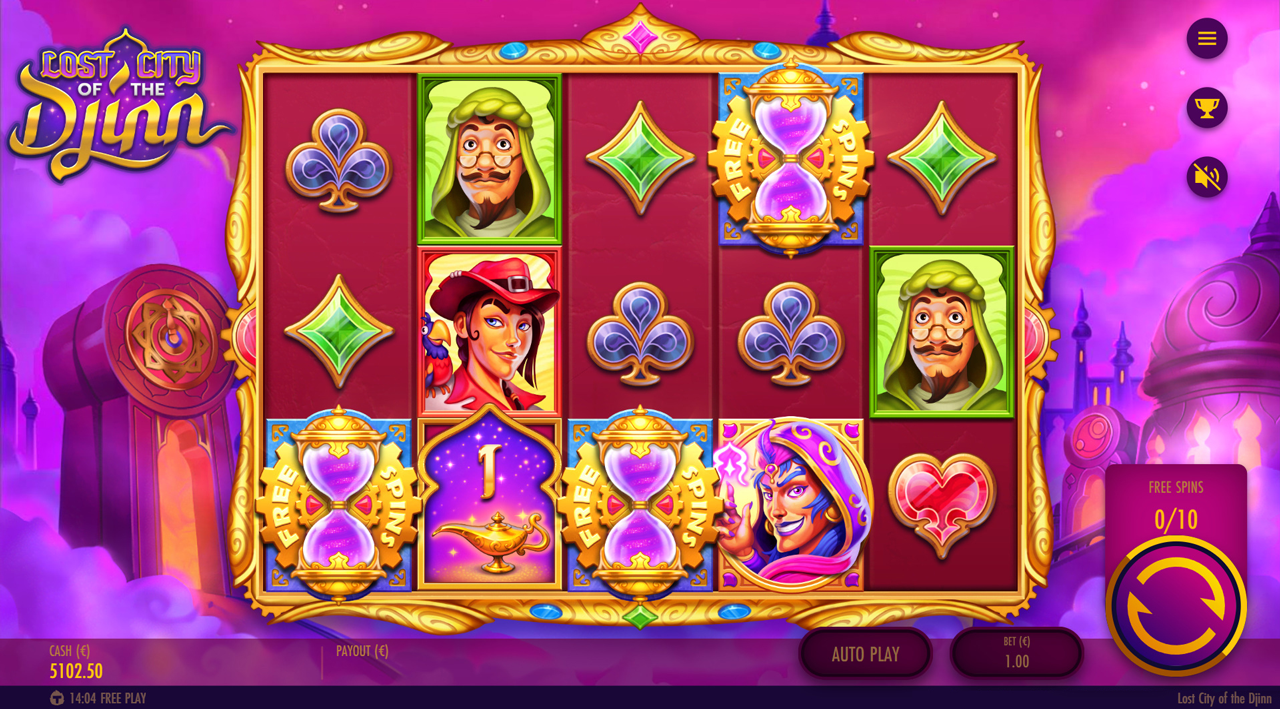 During the feature the Massive Mystery Symbol is triggered on every spin! 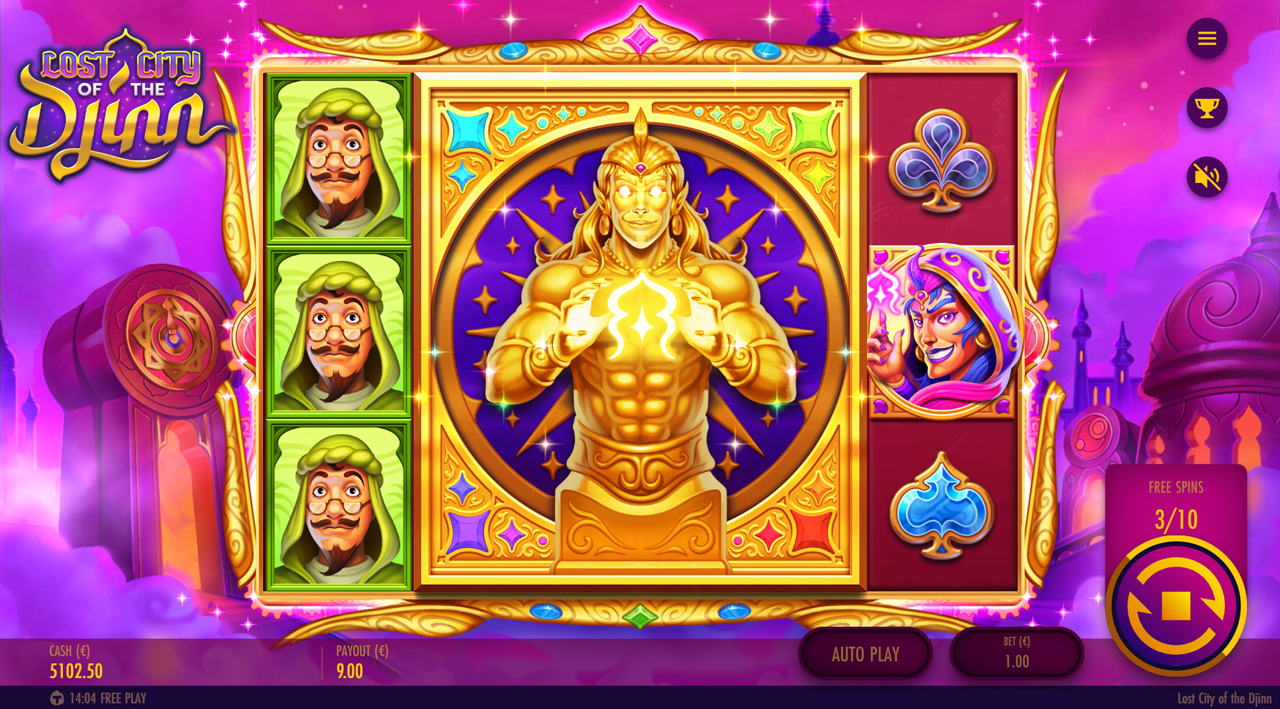 The third and final feature is the Djinn Spins which are triggered either during the base game or during the Free Spins. To trigger Djinn Spins you need at least 3 cash scatter symbols to land, once triggered the normal reels are replaced with special reels that only contain symbols with Bet Multipliers that start with values between 1x and 50x, Djinn Spins Feature symbols and Blank spaces. 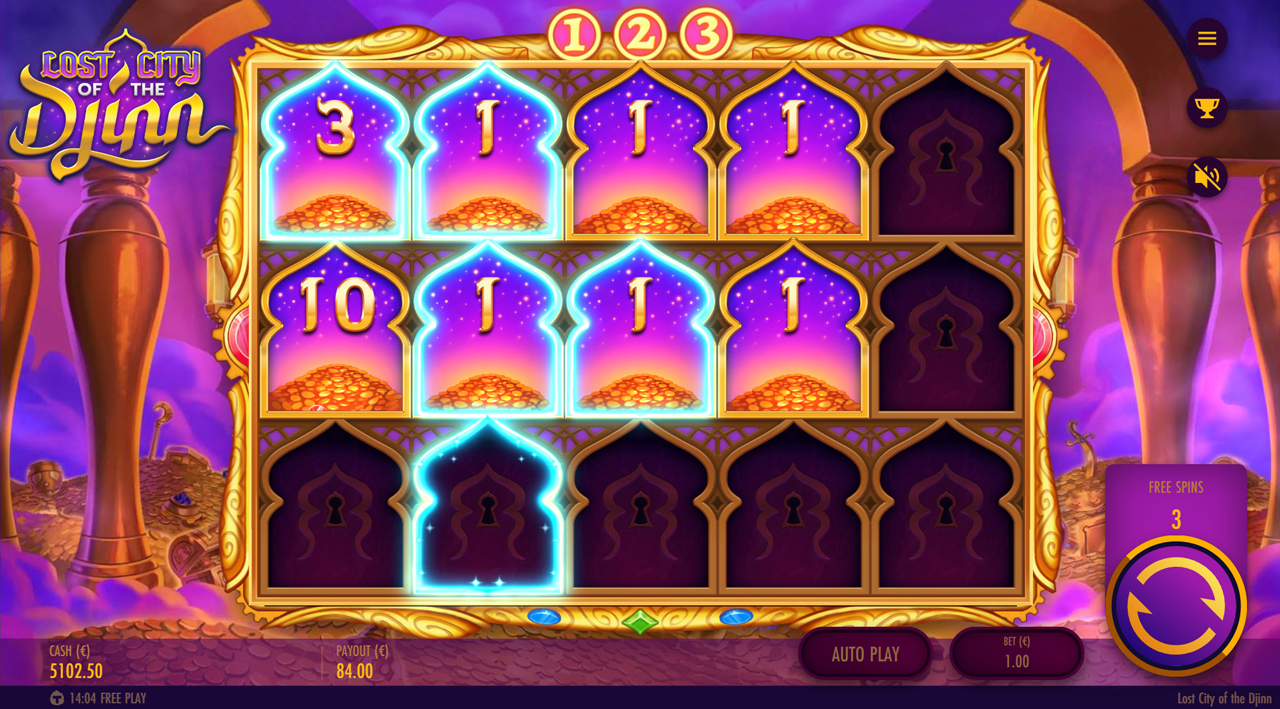 The Djinn Spins game starts with 3 spins and each time a symbol lands on an empty space the spins reset to 3, all symbols that land remain stuck on the reels for the duration of the feature.

In the Djinn Spins feature there is a pattern of 5 illuminated symbol positions, when these positions are filled the Pattern Collect feature is activated. The values of the 5 illuminated symbols are added together, moved to the symbol on the middle reel and then doubled! The symbols collected are then removed and a new pattern is generated. 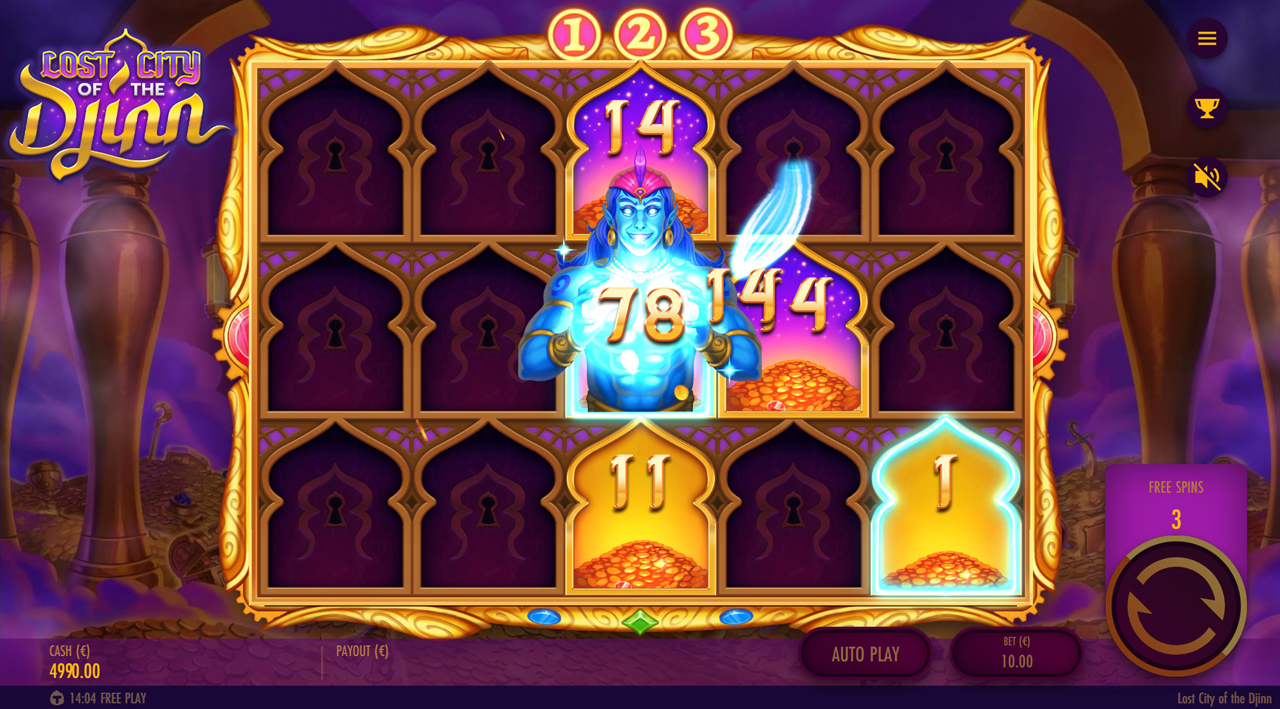 The next feature in Djinn Spins is a Copy Feature, this symbol will copy all the amounts from the other symbols to itself, the same as the collect symbol in Money Train. 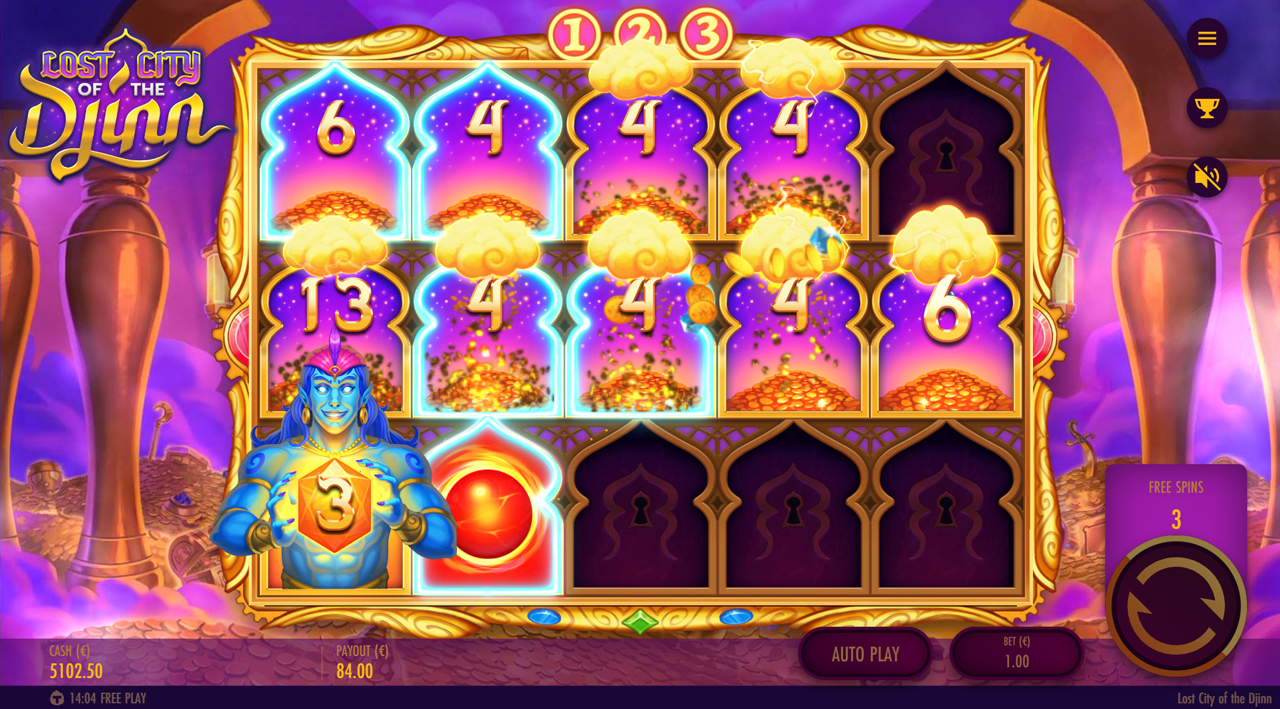 The final feature in Djinn Spins is an Upgrade Feature, this symbol will add its own bet multiplier to all other symbols that have already landed. 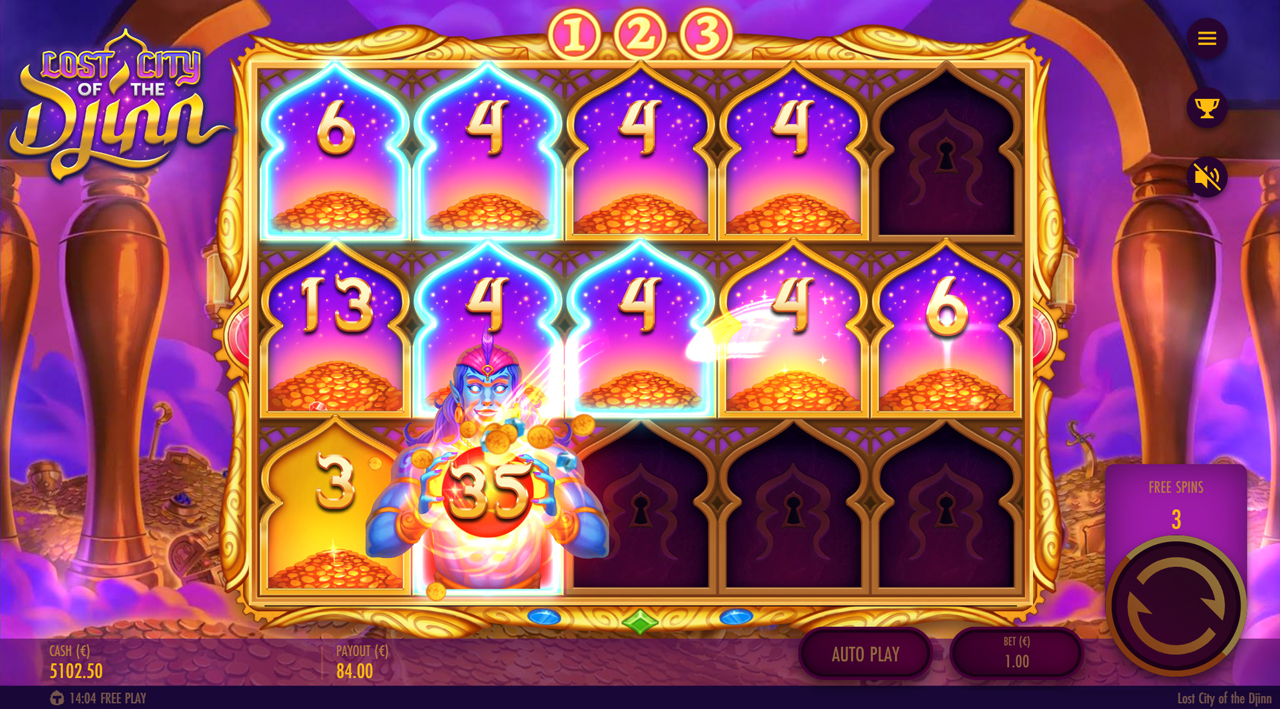 Lost City Of The Djinn Paytable

The paytable in Lost City Of The Djinn is dynamic and changes with your stake, the example below is set to £1 per spin for clarity. We start with the Purple Clubs and Blue Spades both paying 3x for 5 of a kind, the Green Diamonds and the Red Hearts both pay 3.50x respectively.

Next we have the premium symbols and start with the Blue Lady paying 10x for 5 of a kind, the Green Man pays 12.50x, the Red Lady pays 15x and the mischevious looking Purple Lady pays 30x which is the same as the Wild Symbol for a full line.

Final Thoughts On Lost City Of The Djinn

Lost City Of The Djinn has an RTP of 96.07%, the volatility is rated High and the maximum win is 25,000x stake which even Ali Baba himself would be happy with!

The graphics are very Thunderkick-esque and so are the sounds, the gameplay is smooth and for jurisdictions that allow quick spins its lightning fast at stopping the reels. The features are great too, I had a 468x win from the Djinn Spins feature in the base game on my test play and that was the first feature!

Overall its a fun to play game and I will definitely give it a bash in the future, if you fancy rubbing the Djinns lamp to see if Will Smith appears then there’s a link below to a TGC trusted casino.

Click here to play Lost City Of The Djinn