In this review we are going to be looking at the classic B3 game Rainbow Riches which has been remade with added Megaways under licence from BTG. We have the ability to buy the bonus outright and I noticed a pie gamble too so this could be a real hit with the players that enjoy a bit of pot hunting and leprechaun lunacy or a big flop for those with bad memories of Rainbow Riches on the FOBT’s, either way let’s see how it plays.

Rainbow Riches Megaways has a 6 reel setup and an extra reel above the middle reels, each reel can contain up to 7 symbols giving a maximum potential of 117,649 ways exactly like Bonanza. 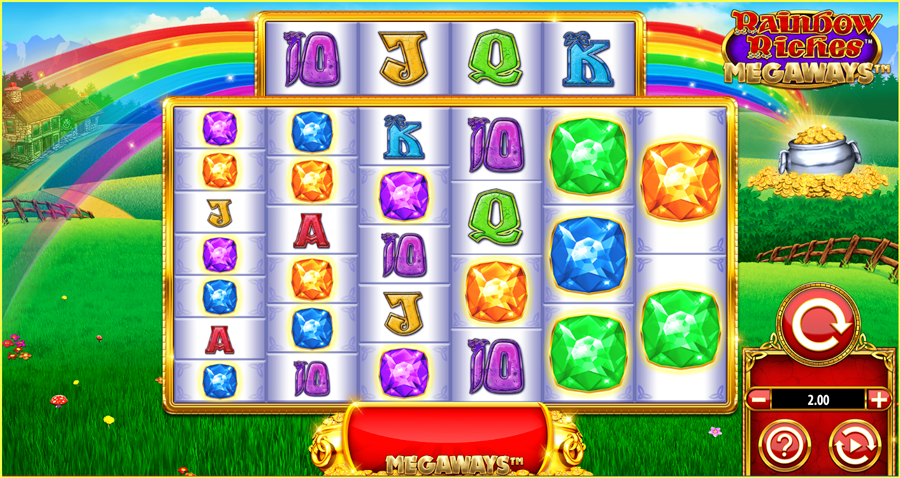 During the base game you have an in game mini feature called the Super Gem Bonus, if this symbol appears during any spin it transforms all gems in view to the same random symbol, it’s a similar feature to the dynamite in Diamond Mine but with a different twist on the mechanics. 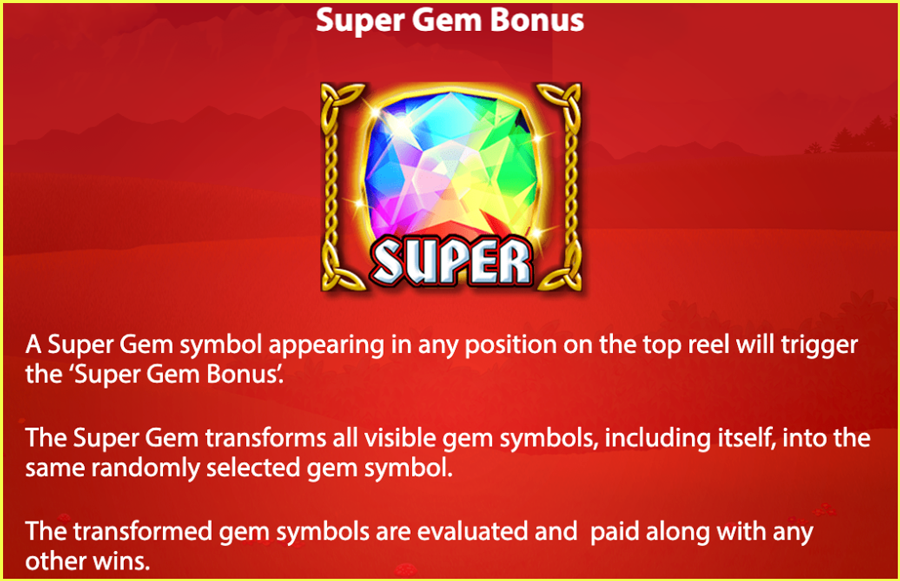 Your aim is to land at least 4 scatters to unlock the feature but you also have the opportunity to buy the bonus for a straight 100x stake or you have the Take A Chance feature where you can pie gamble for the feature for 50x the stake or 25x the stake depending how big the risk is you wish to take. I stuck to this gamble feature when purchasing the bonus and I must say it didn’t seem to be as bad as I imagined, nowhere near the brutality of the Extra Chilli wheel when I played it, it actually seemed pretty fair and the RTP for the gamble is listed as 100% RTP which is reassuring! 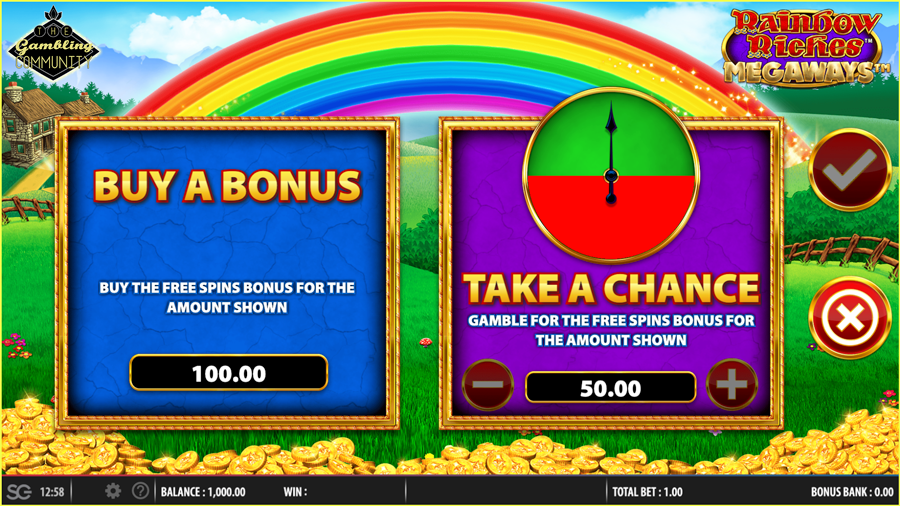 The feature on Rainbow Riches Megaways is fairly straight forward with a few little tweaks to make it slightly different from the plethora of other Megaways releases. You start with at least 12 free spins and during these spins your multiplier builds up with every cascade, you can’t re-trigger the bonus but you can have a special free spin symbol land on the upper reel and it gives you 1, 2 or 3 extra spins and then disappears and allows the cascade to continue.

The Super Gem Bonus is also active during the feature and if you’re lucky enough to get this near the end of a bonus you may have a huge multiplier to go with it for some mammoth wins. The best bonus I had was 150x and the worst was 60x and that was playing around 10 feature’s so it was either in a good mood that day or the variance isn’t as crazy as some other Megaways games, I’d probably say it was just in a good mood! 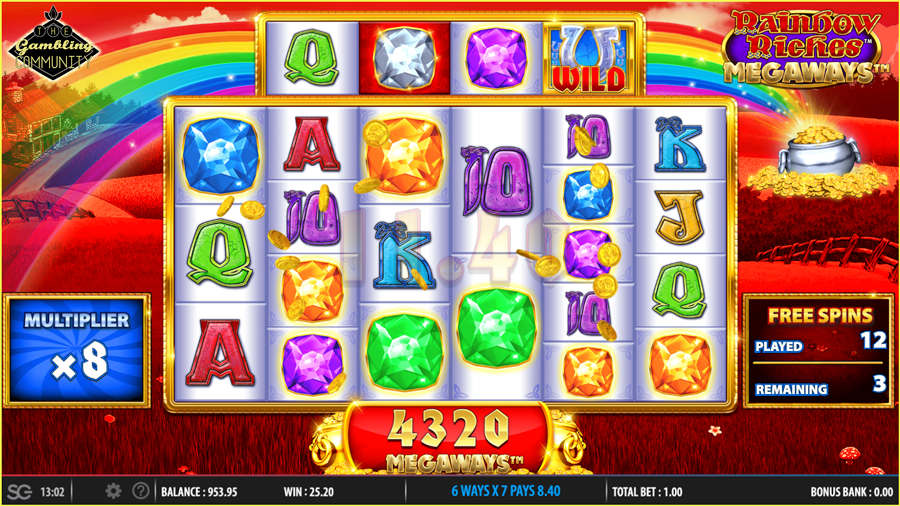 During the base game you have 3 options regarding your wins, you can bank wins off which means any wins just go into your balance as usual, the bank all wins option takes every win you have in the base game and takes it off the price of the feature buy and then the final option takes wins of 3x or below and takes them off the price of the feature while adding any wins over 3x to your main balance. 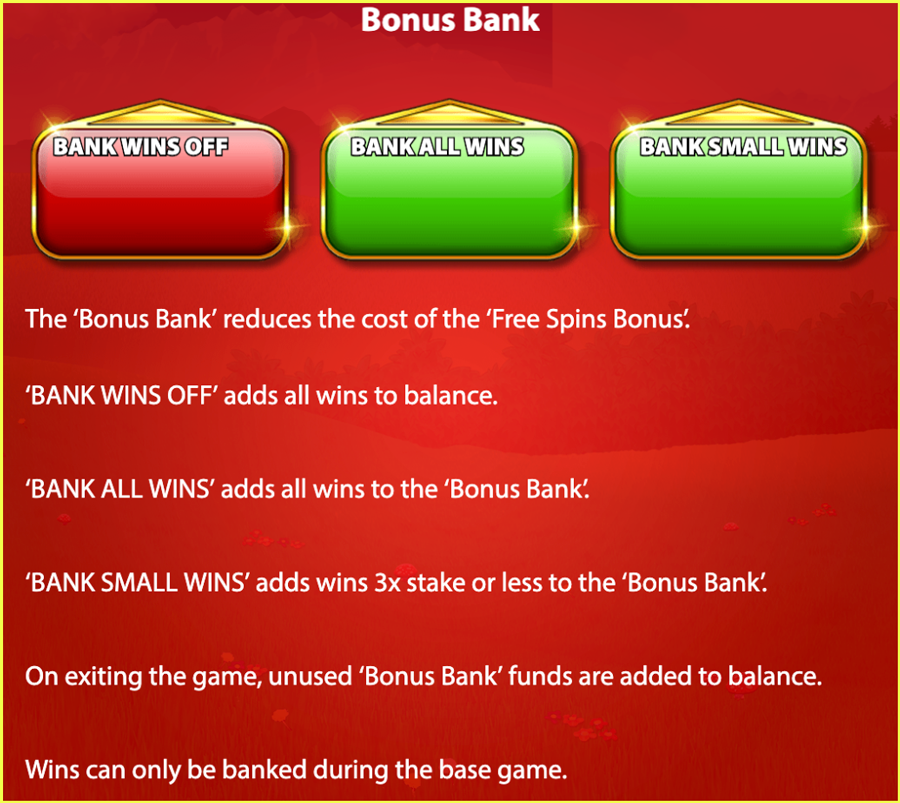 This is the first time I’ve seen an option like this and I like it, it means you can grind away on the game and use your wins towards the feature which is normally the main reason we play any slot, to get the feature! Top marks to SG for this innovative idea.

The paytable in Rainbow Riches Megaways is straight forward and to the point, listing your potential wins in multiples of your stake, just the way I like it! Starting with the lowest paying symbols we have the 10’s that pay just 0.8x your stake for a full way, the J’s pay 0.9x, the Q’s and K’s pay 1x and the A’s pay 1.75x for a full way of 6. 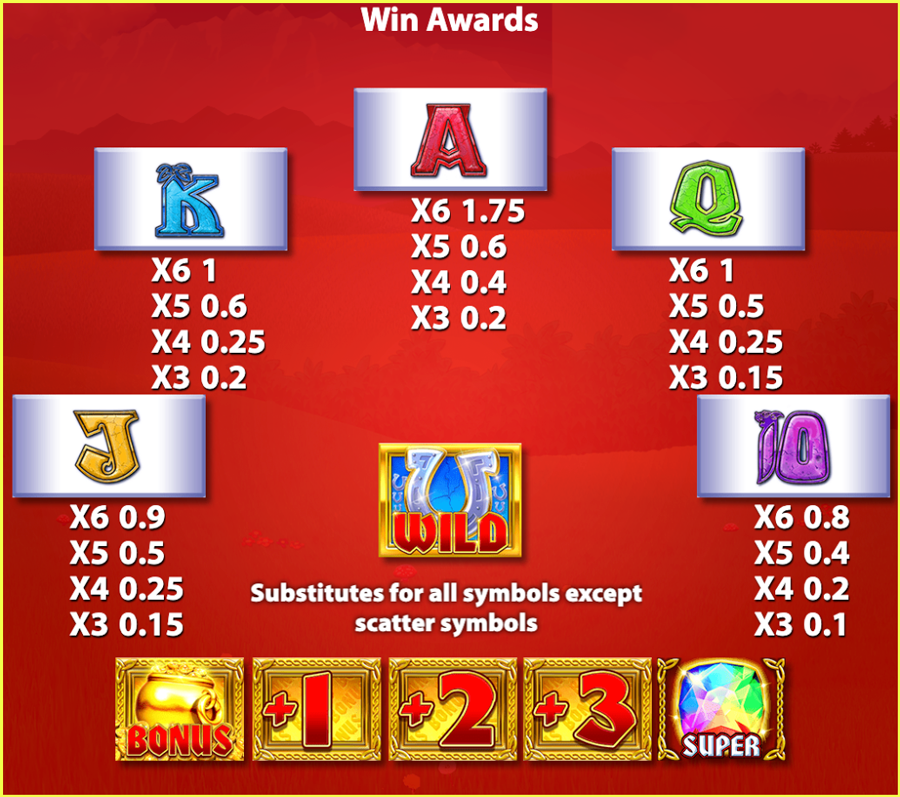 The blue gems also pay 1.75x, the green and purple gems pay 2x, the orange gem pays 7.5x and the top symbol of the diamond pays a huge premium of 50x per full way, get this symbol in the bonus with a decent multiplier and the win will be insane! 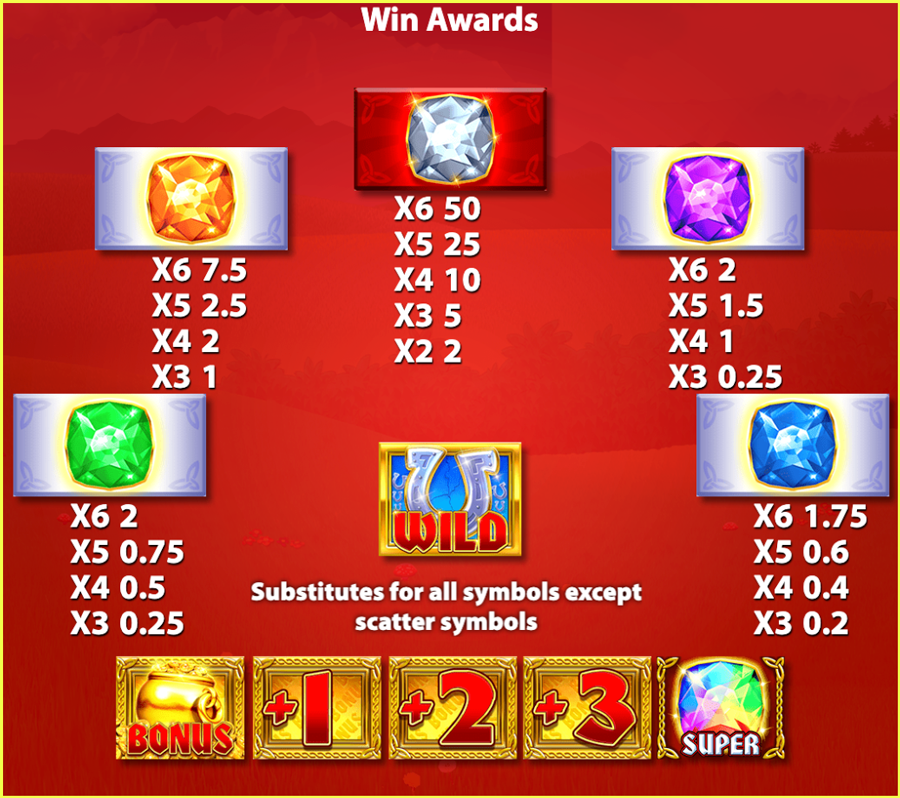 Rainbow Riches Megaways has an RTP of 96% and a slightly higher RTP of 96.661% to 96.863% if you use the Buy feature option, also as I mentioned earlier the gamble feature has an RTP of 100%. The variance is obviously super high as with all Megaways games with 117,649 possible ways and the graphics and sounds are very nicely done, I’m not a massive fan of the original as the harp noise drives me mad every spin, but it is certainly a game I can’t totally avoid as I love getting the pots feature and this version seems to have done away with that irritating noise so that’s another thumbs up. To round it up, this is a game I will definitely be playing and I think you will see it on many streams in the near future, thanks for reading and good luck if you’re having a gamble! 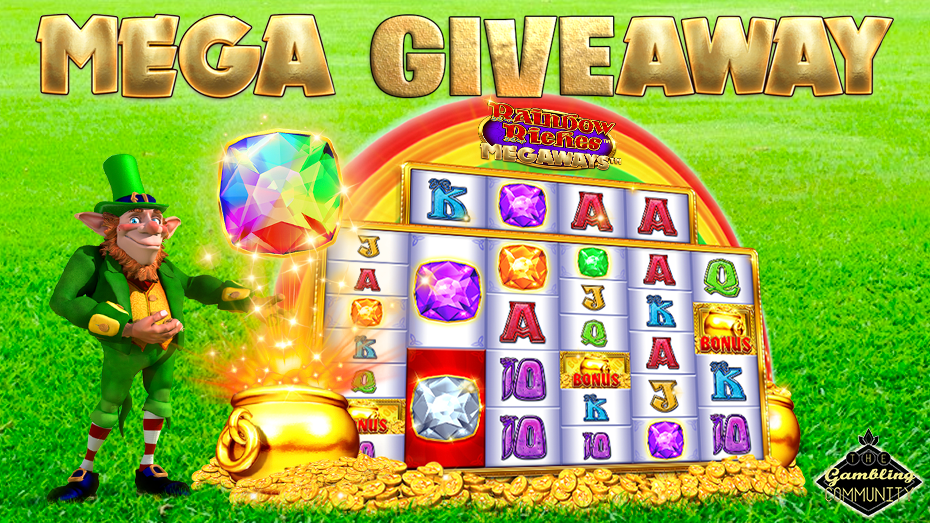