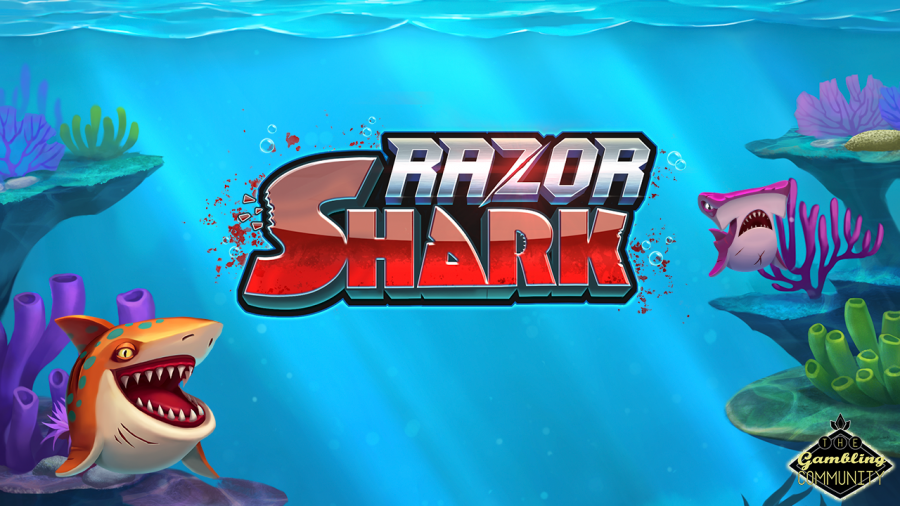 Push Gamings latest release is called Razor Shark and for the time being its exclusive to Casumo casino. The game promises to have the player engaged from the first few spins and the max win is capped at 50’000x your stake per spin so its sure to please those players after some super high variance action.

Razor Shark has a 5 reel by 4 row setup and you play on 20 fixed pay lines. The games main feature is called mystery stacks which are blocks of 4 symbols that can land anywhere on the reels.

The seaweed can reveal several variations, the first is called the nudge and reveal feature where the seaweed reveals one mystery symbol, any wins are awarded and the next spin the seaweed nudges down.

The next feature is my personal favourite and its called the razor reveal feature, the seaweed parts and reveals gold sharks which triggers each block to spin and you get either a scatter symbol or a coin win, the coin wins can range from 1x all the way up to 2500x! I had a very similar scenario to the screen below and I was lucky enough to reveal 4 scatters and a coin worth 50x, that triggered my first bonus on the game with an extra spin and a win of over 60x before I even started!

To start the feature you need to land at least 3 scatters and for every extra scatter that lands you get the mystery stacks nudge up a space giving you the equivalent of an extra spin.

The free games feature combines the mystery stack feature from the base game with an unlimited multiplier that increases with every nudge, just like Tiki Tumble the feature continues as long as there are mystery stacks on the reels. During my first feature I landed the razor reveal on a mystery stack and I was lucky enough to reveal a coin worth 50x, this was then multiplied by 15x giving me a total feature of just under 1000x my stake! 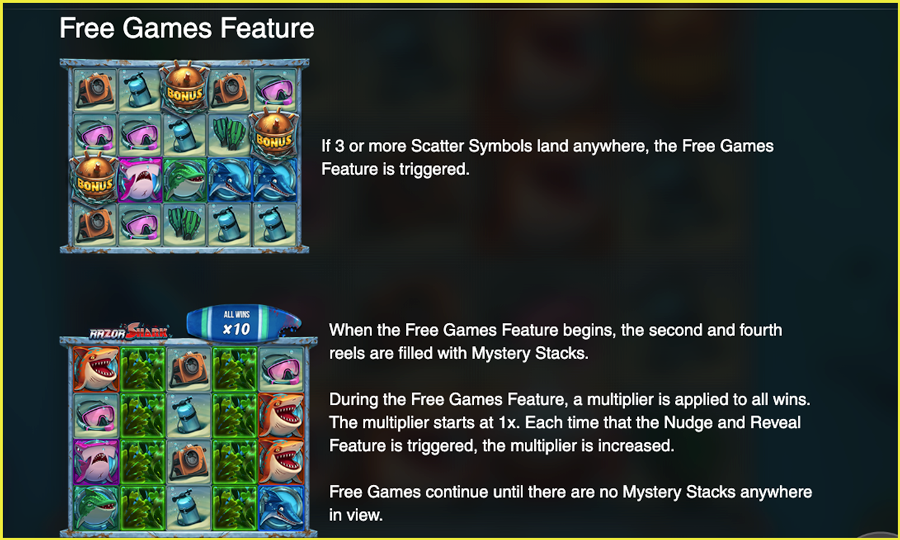 I thought it would be unfair to base my thoughts on 1 bonus and a win of 1000x so I carried on playing and got another feature in under 50 spins, this paid 433x my stake so it was obviously my lucky day and the RNG gods were shining down on me, please bare that in mind when reading this review as its hard to remain impartial when something impresses you so fast and by so much!

The paytable in Razor Shark is dynamic and changes with your bet size and the examples below are all based on £1 spins. Starting with the lowest paying symbols we have the camera, the scuba mask, the fins and the oxygen tank all paying 2.5x your stake for 5 of a kind.

Moving onto the premium symbols we have the blue shark paying 5x for a full line, the green shark pays slightly more at 7.5x, the pink hammerhead pays 20x and the orange shark pays 25x. The wild symbol pays 50x per line and substitutes for every symbol, this is the symbol you want to reveal behind the mystery stacks! 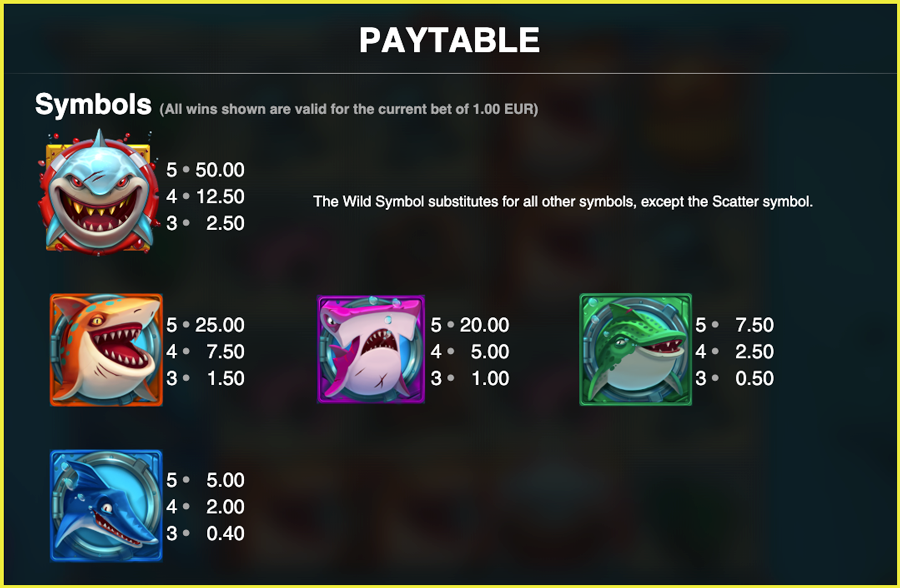 Razor Shark has an RTP of 96.7% and its safely in the super high variance category with the max win quoted as up to 50’000x your stake per free spin! The graphics and sounds are really nice and the mystery stack feature really did grab my attention, another player said to me he would prefer if the mystery stacks were just wild symbols but I have to disagree, I liked the razor reveal feature and the fact that each space can contain a coin worth up to 2500x and then be multiplied is insanity and just what I like in a slot game!

To sum up my time on this game, I played under 100 spins and left with over 1300x my stake profit from just 2 bonuses, it’s a game I will struggle to not recommend but bear in mind its the high variance and volatility that makes this possible so it could always have paid nothing back to back as well! As always thanks for reading and if you fancy a go theres a link below which supports TGC, good luck! 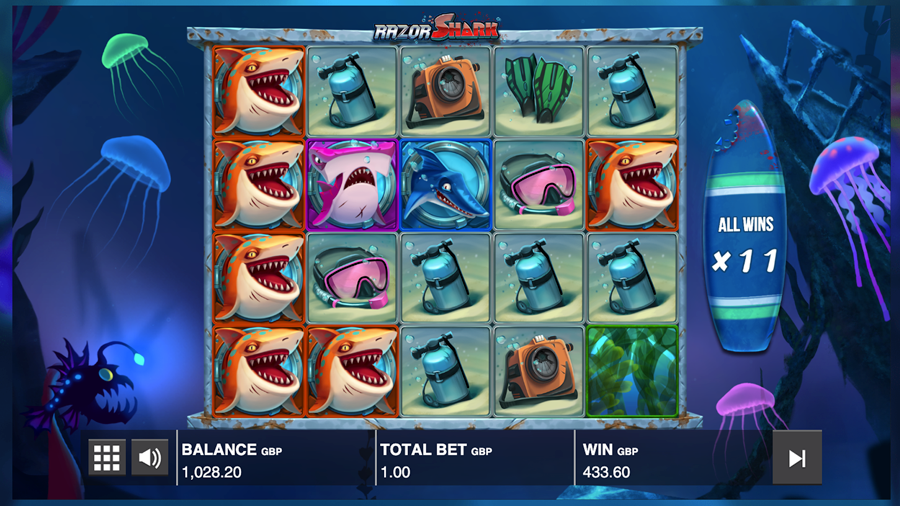 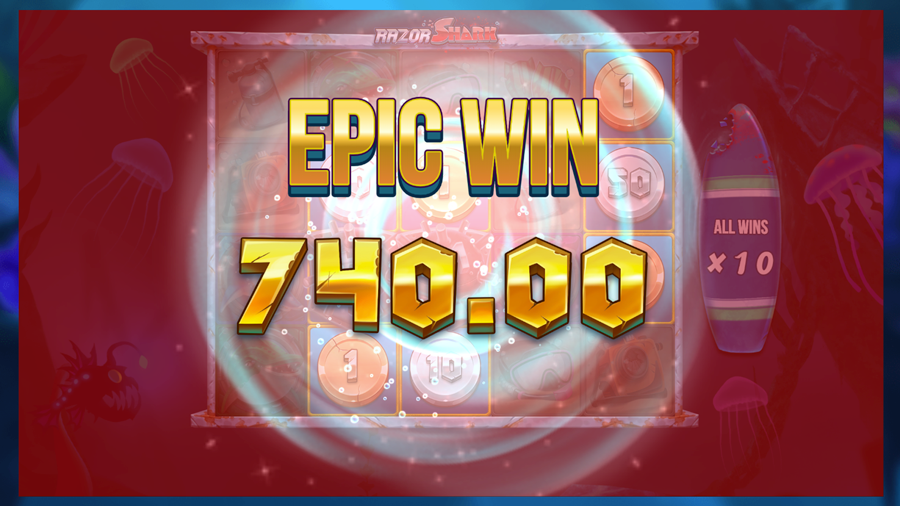