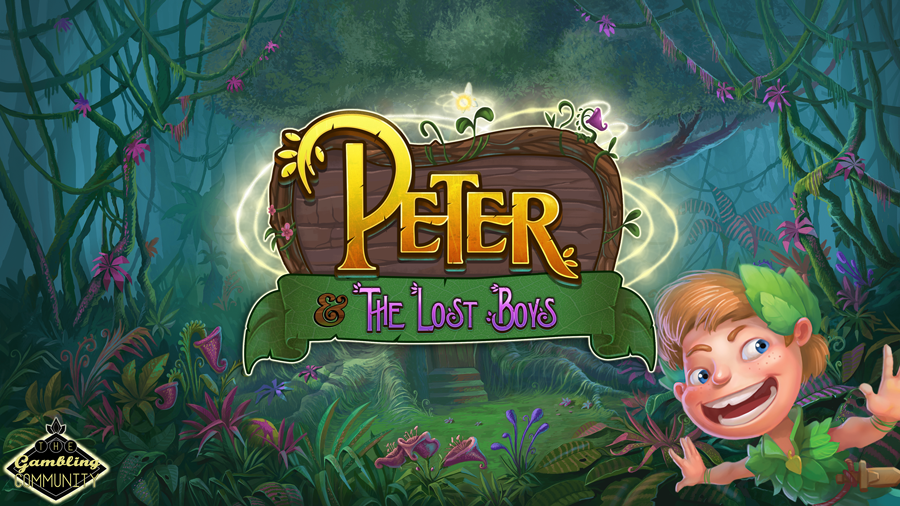 Overview Of Peter & The Lost Boys

Push Gaming are quickly becoming one of the top providers that players choose to chance there luck on so today we’re going to look at Peter & The Lost Boys, a slot that many don’t know about as it was released when Push Gaming where unknown to the masses. It doesn’t have super high variance and the potential for a life changing win but what it does have is bags of character and a very interesting feature with the wild’s, Neverland here we come!

Peter & The Lost Boys has a 5 reel by 3 row setup and 25 fixed paylines, the main feature in this game is based around linking wilds, every time Peter Pan lands on more than one reel he fly’s across the reels linking up all spaces in between and as he’s also the wild symbol you can end up with some nice win’s, this feature then becomes even more exciting if you land 3 scatters, let’s take a look why below!

The Tinkerbell feature in this game is won by landing a scatter on reel’s 1, 3 and 5, once you do this you are taken to a pick round where you have 6 fairies to choose from, each one can contain either a cash prize, a multiplier, extra freespin’s or a lost boy. Any single award type may be revealed up to 5 times, this means you can potentially get up to a 10x multiplier, 25 extra free spins or a maximum of 5 extra wild symbols with the lost boys, sadly there’s not enough picks to get all of these! My preference would be for a few lost boys and a couple of multipliers giving you a nice chance for a screen full of wilds and the multiplier to juice it up! 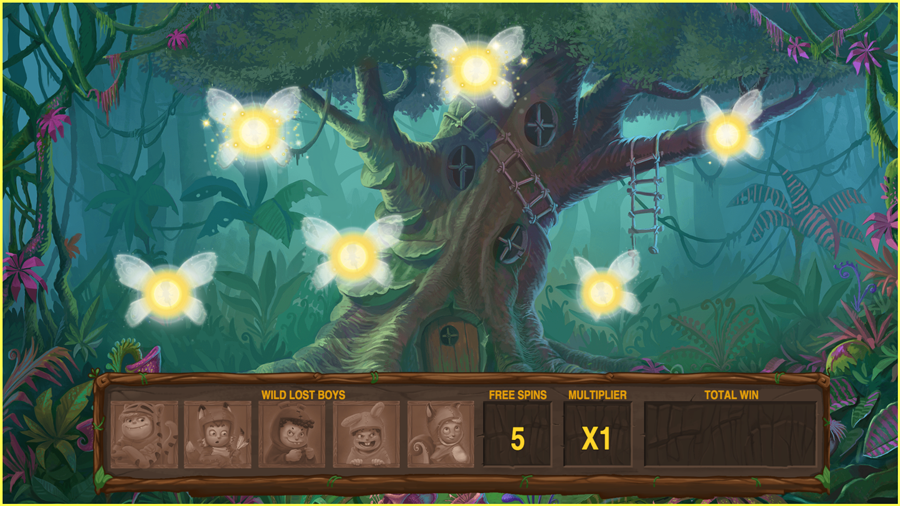 Below is a picture of a win just over 100x I got while testing the game, this win is a result of having 4 wilds, a wild at the bottom of reel 1, one at the top of reel 2, one at the bottom of reel 4 and finally one on reel 5, this made Peter Pan fly up and down linking them together, with extra lost boys as wilds you can see how easy it becomes to fill the screen with wilds. 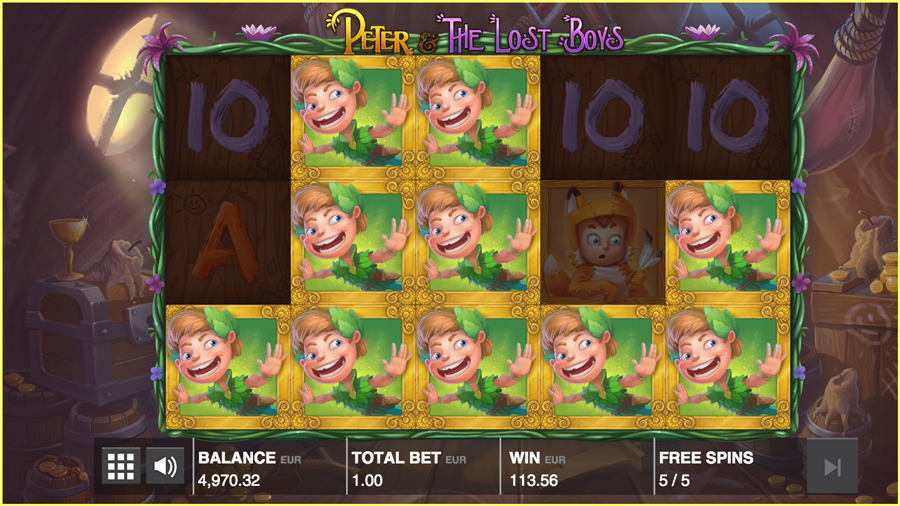 The paytable in Peter & The Lost Boys is dynamic and adjusts with your bet size, this makes it nice and simple to see what you could win, the examples below are based on a £1 spin so let’s take a look. Starting with 10’s, J’s and Q’s the award is 3x your total bet and for K’s and A’s its 4x. These wins are pretty much irrelevant as the linking wilds are fairly common so its the premium wins we’re interested in! 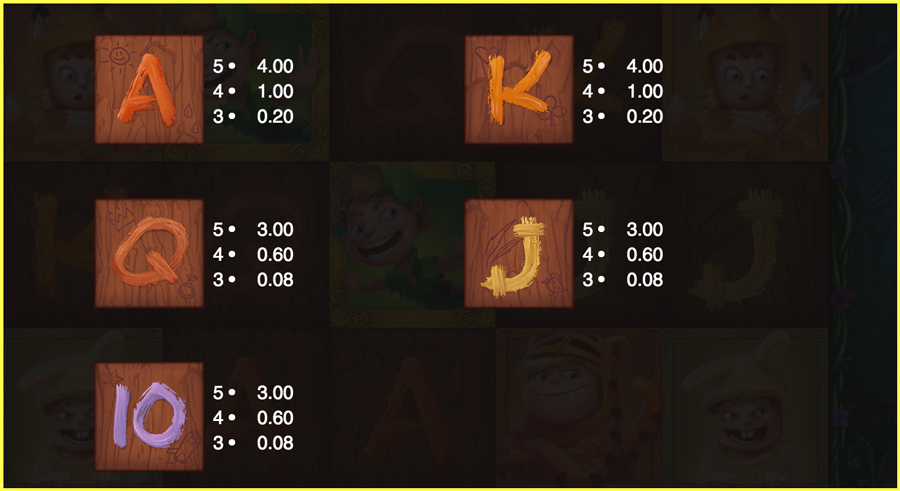 Looking at the premiums we have the Lost Boys paying between 12x and 16x and the Peter Pan wild and his mate in the tiger suit paying 20x for a full line, this means the maximum potential is 500x for a full screen of wilds and 5000x if you had the 10x multiplier, I think being realistic your maximum win on this game is going to be around the 500x mark, maybe 1000x on a really lucky day! 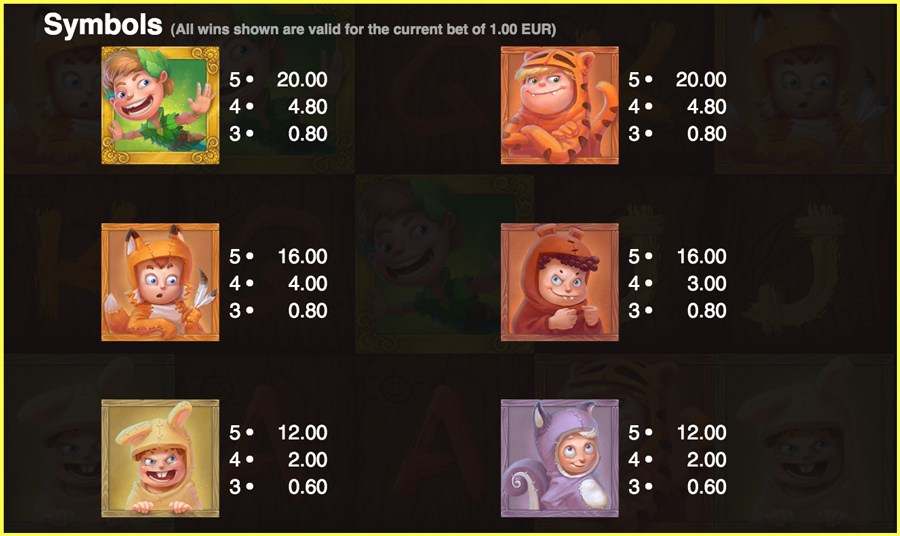 Peter & The Lost Boys has an RTP of 96.53% and Id class it at the higher end of medium variance, it’s not quite high variance purely because of the frequent wilds and the maximum win potential. The graphics as with all Push Gaming slots are very well drawn and the sounds fit perfectly with the theme. Overall it’s a game I have played countless times over the years and for those that have followed Rocknrolla from the start you will also remember him playing this, in my opinion it is an underrated game and deserves more recognition! If you fancy a trip to Neverland there’s a link below and as always thanks for listening to my ramblings, good luck!