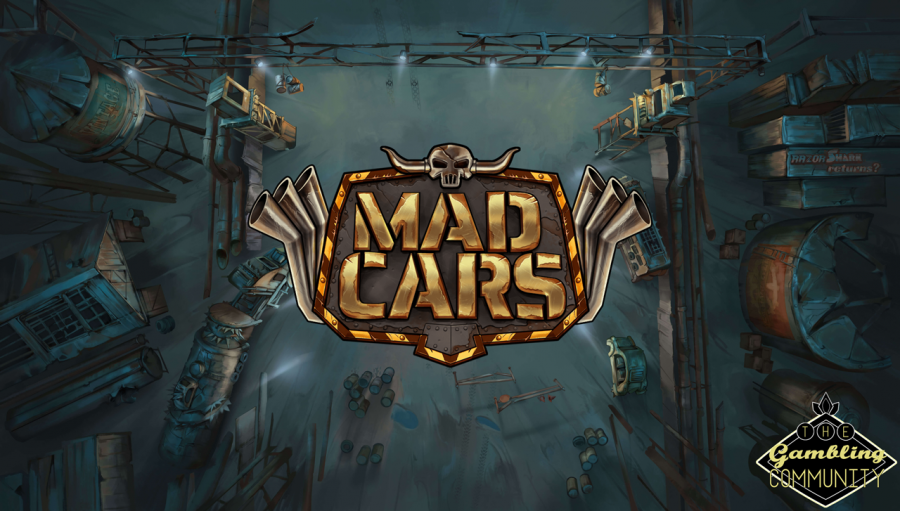 Start your engines and buckle up, its time to drive Mad Cars!

Speeding through a postapocalyptic wasteland is the only way to win the Mad Race as you compete to land Instant Prize Car symbols to win as you race to the finish line.

Along the way you can unlock Booster Symbols to upgrade your Mad Cars for better rewards at the chequered flag. 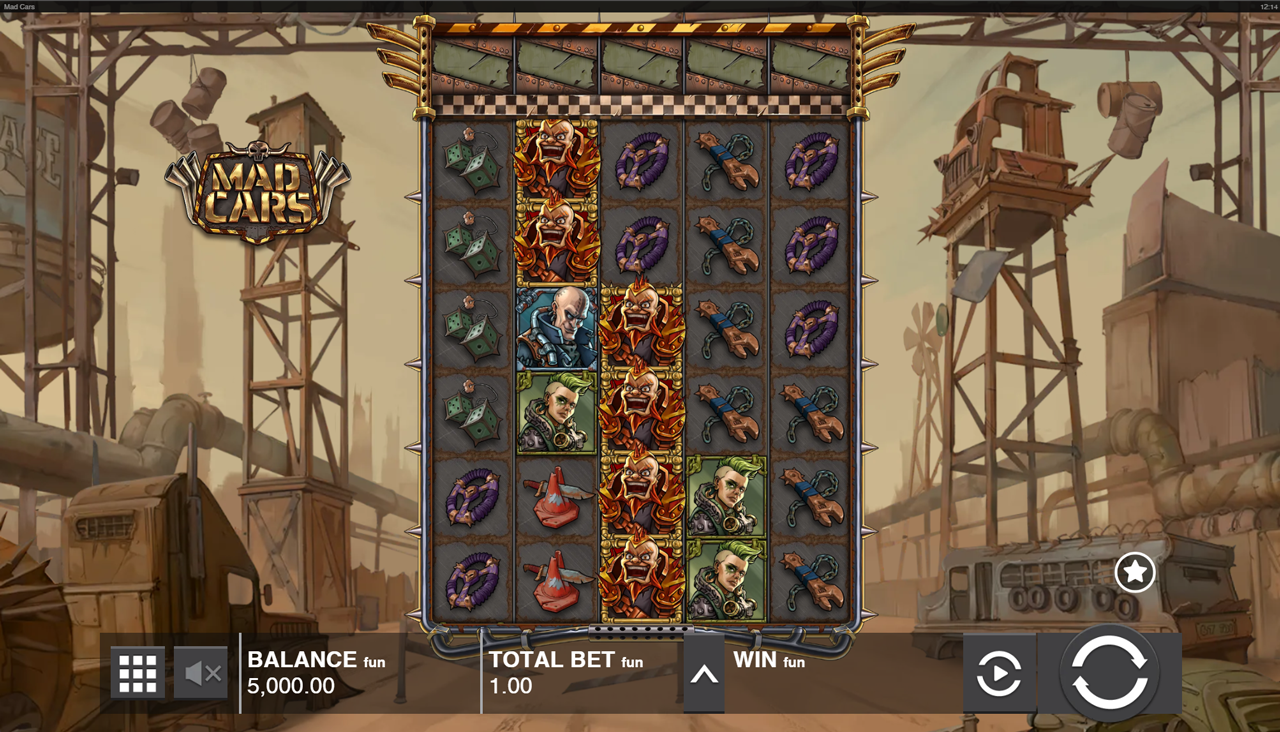 To unlock the feature you need a scatter car symbol which can appear on any spin and will stay on the reels till it has 6 spaces worth of fuel land on the boost reel at the top of the reels, this will then take you to the mystery bonus wheel. The scatter also has a value of 10x stake once the feature is triggered. 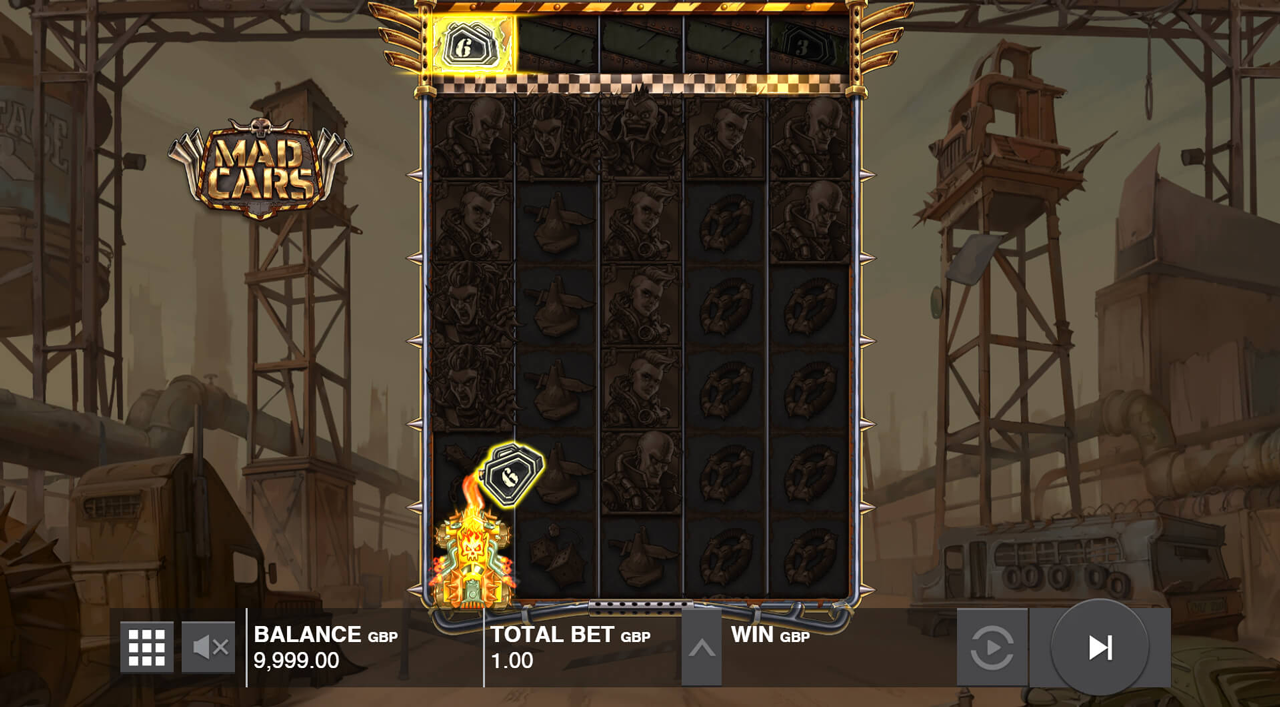 These features are very similar to that of Money Train with the Persistent Collectors and Payers just in a new format. 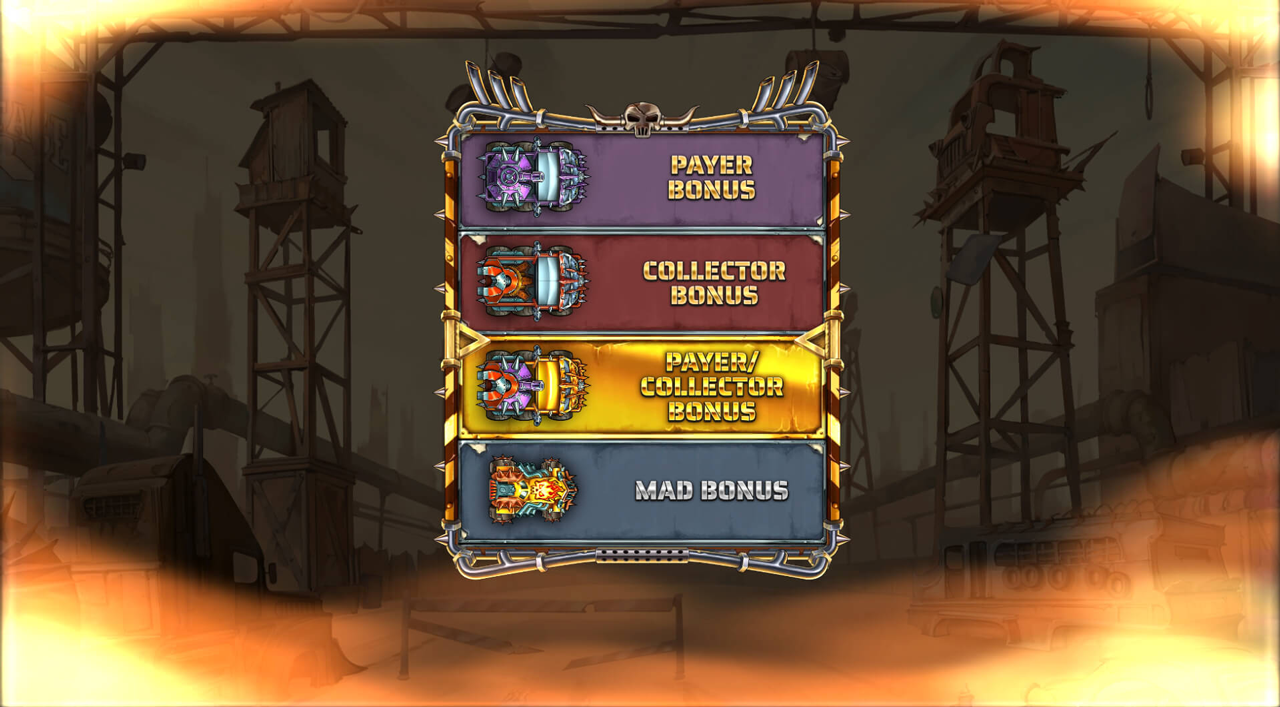 The way Mad Cars works is you have cars appear on any reel at the bottom on any spin that have random multipliers of 1x, 2x, 5x, 10x, 25x, 50x or 100x and these stay on the reels till they pass the finish line 6 columns above the start line.

The boost reel at the top of the reels has 5 different symbols, these consist of the following. 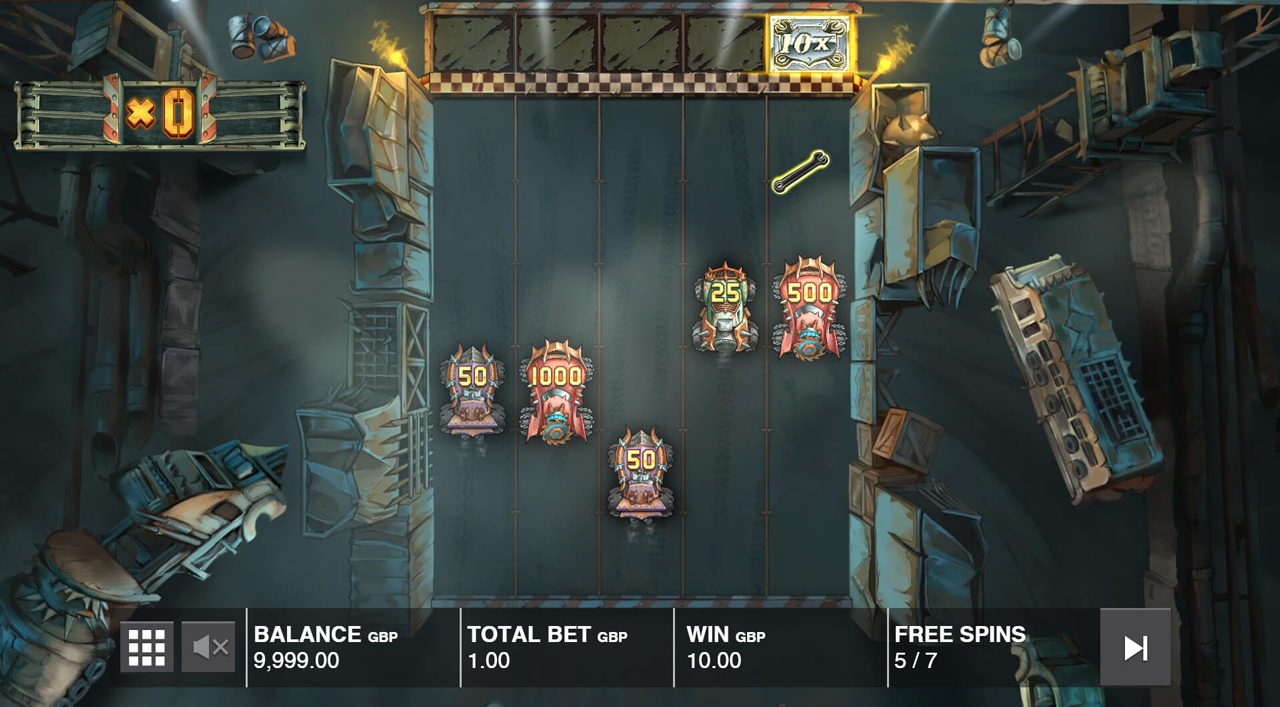 All Mad Race features start with 7 free spins and 5 car prize symbols on all bottom reels, when a car passes the finish line the amount is awarded and a new car appears on the relevant reel with a new multiplier amount and also awards 1 extra free spin!

The boost reels contain the same 5 boost features as above but with an extra 1 called Line Up as shown below, when this is triggered it will line the cars up together with the car on the triggering reel. 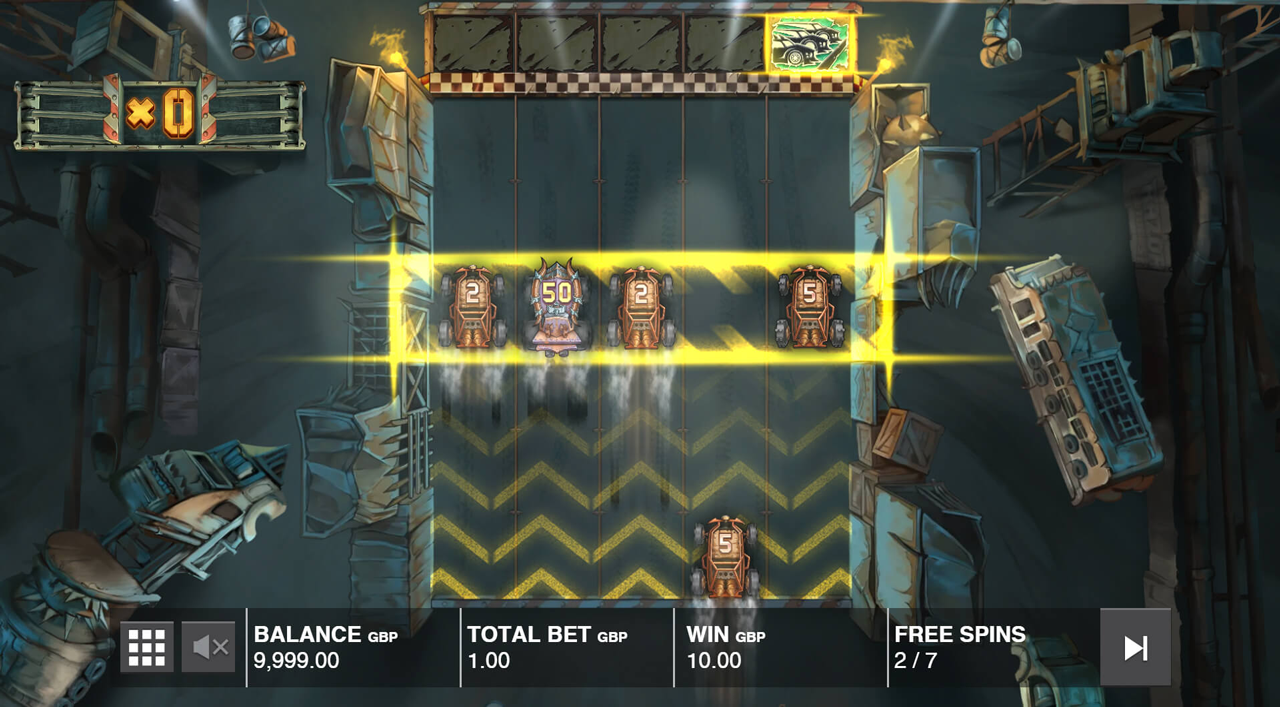 The example below is the top feature and as you can see there are some mammoth car values on all reels, this is where the games potential becomes reality. 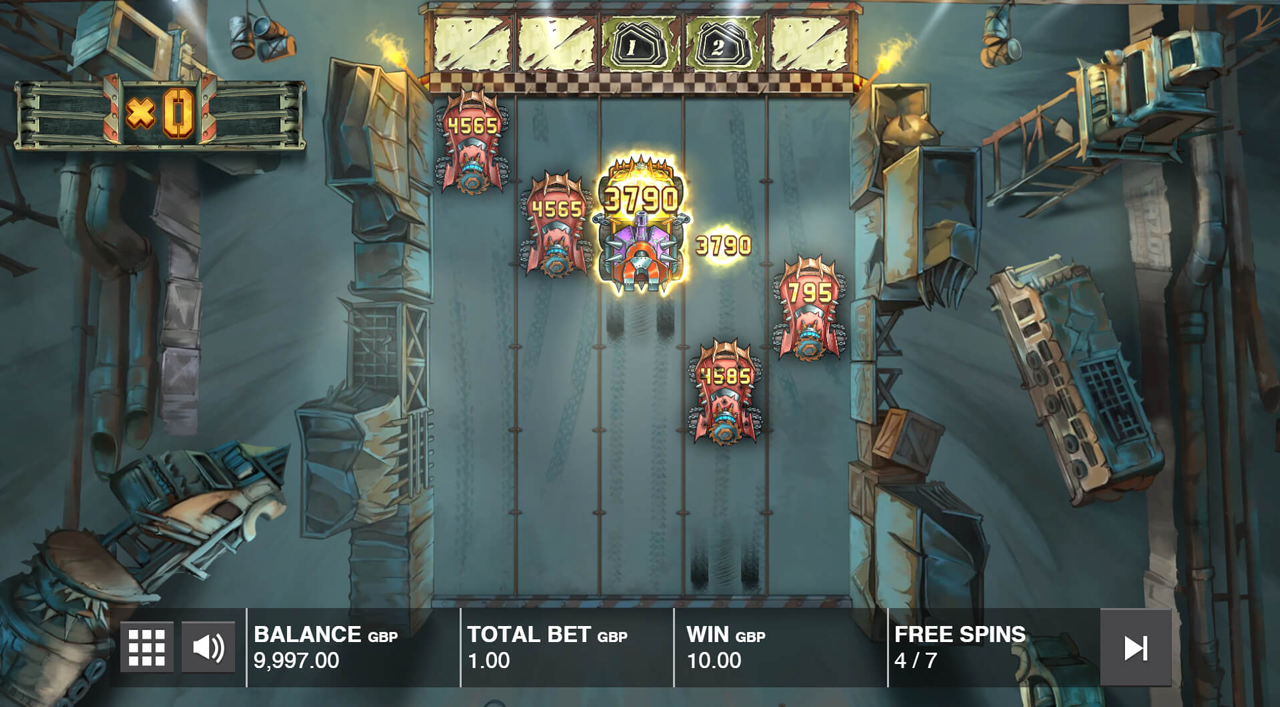 There is also a Mad Race feature which is triggered randomly at the end of the free spins, when triggered all remaining cars will pass the finish line regardless of there position and pay there multiplier amounts, this then ends the feature. 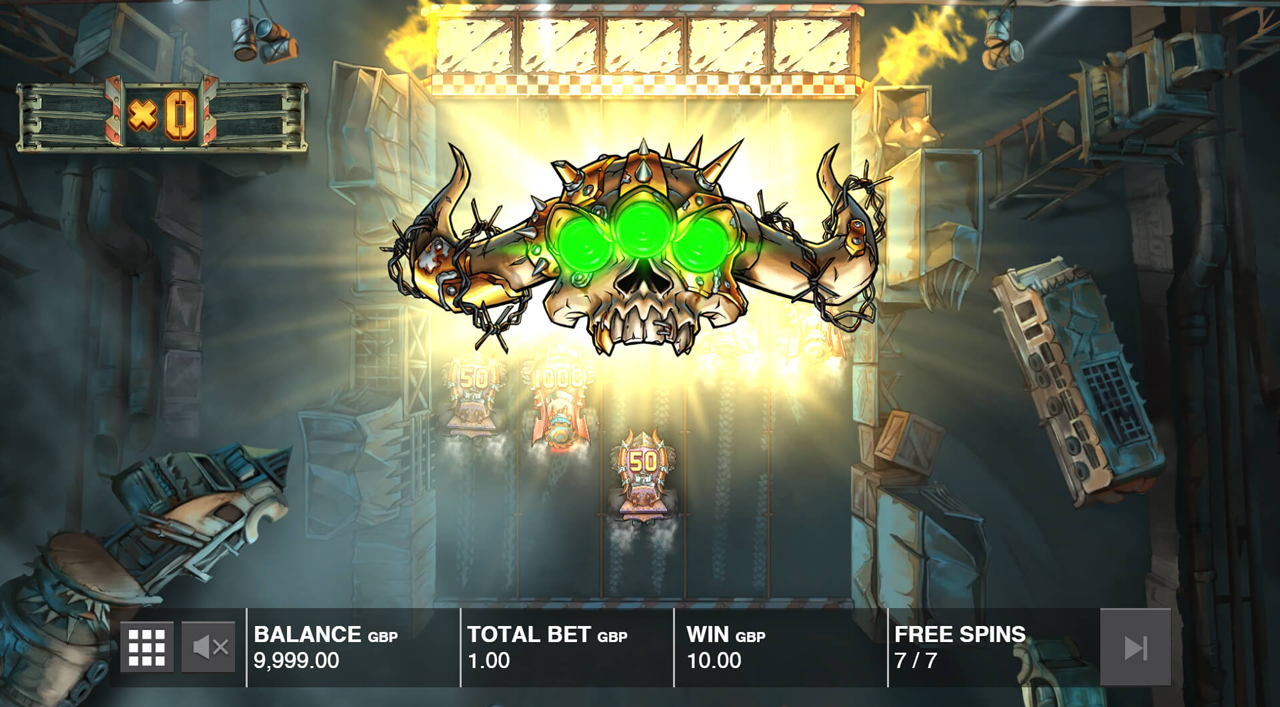 The paytable in Mad Cars is dynamic and changes with your stake, the example below is set as usual to £1 per spin for simplicity. To start with we have the 4 low paying symbols consisting of the Traffic Cone, the Wrench, the Steering Wheel and the Mirror Dice all paying 5x for a full line.

Moving onto the premium symbols we have the Green Driver paying 20x for a full line, the Blue Driver pays 25x, the Purple Driver pays more at 50x and the top symbol of the Gold Driver pays a more than acceptable 100x for a single line. 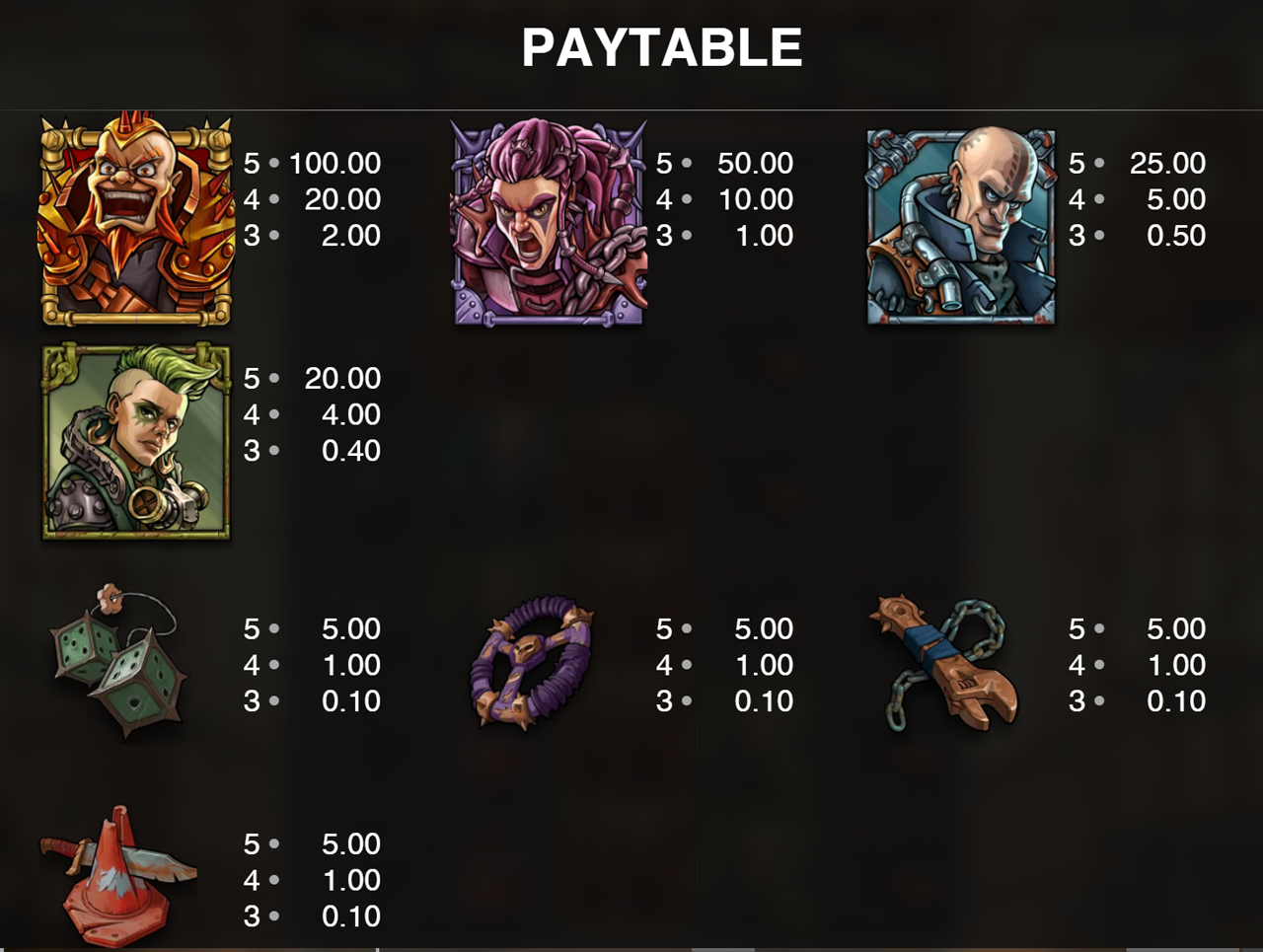 Mad Cars has an RTP of 96.39%, the volatility is rated High and the maximum win is a more than acceptable 25,000x stake.

The graphics and sounds are well put together and the game does well at projecting a Mad Max vibe with the rat rod style graphics, but to be honest this game is similar to Chaos Crew where you’re not playing it for the graphics or the engine sounds, you’re playing it for the massive potential it not only has but already has delivered on many different streams.

Would I play it again? Yes I would!

As always thanks for reading if you made it this far and if you fancy a race in postapocalyptic surroundings then there’s a link below to a TGC trusted outfit.