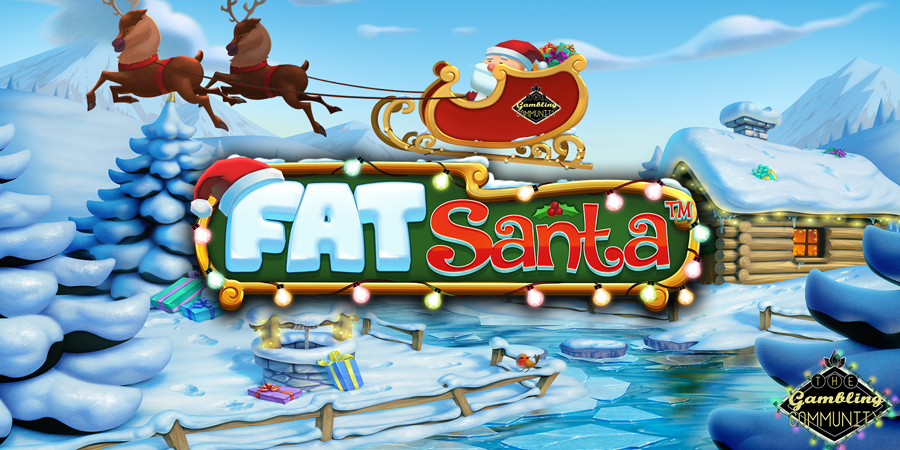 It’s that time of year again, mince pies are on the supermarkets shelves, the kids are writing lists of presents they want and my pocket is waiting to have it’s yearly open wallet surgery, thats right folks its nearly Christmas time! To celebrate the festive season Push Gaming are releasing Fat Santa on the 27th November but we got to play it at TGC pre release as an early present, ho ho ho!

Fat Santa has a 5 reel by 5 row setup with 50 fixed paylines which makes the gaming area one big square exactly the same as Fat Rabbit. The game has 2 features, 1 in the base game and 1 free spin bonus, we’ll take a look at the base game feature Santa’s sleigh first. 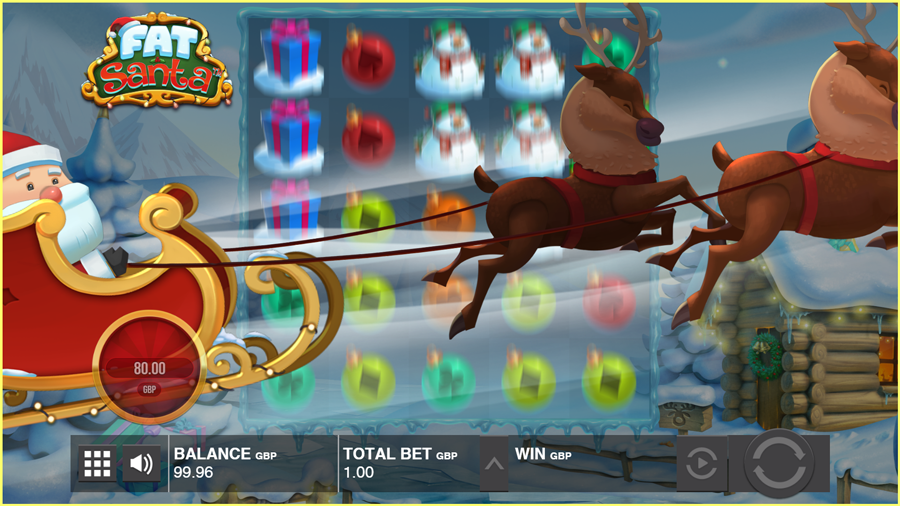 The Santa’s sleigh feature is triggered randomly whilst the reels are spinning. When this is triggered Santa’s sleigh may fly over the reels, leaving behind mince pie symbols at random positions on the reels. These symbols lock in place and act as wild’s for that spin as shown below, occasionally you can get a huge amount of wild’s and really nice win’s from this feature. 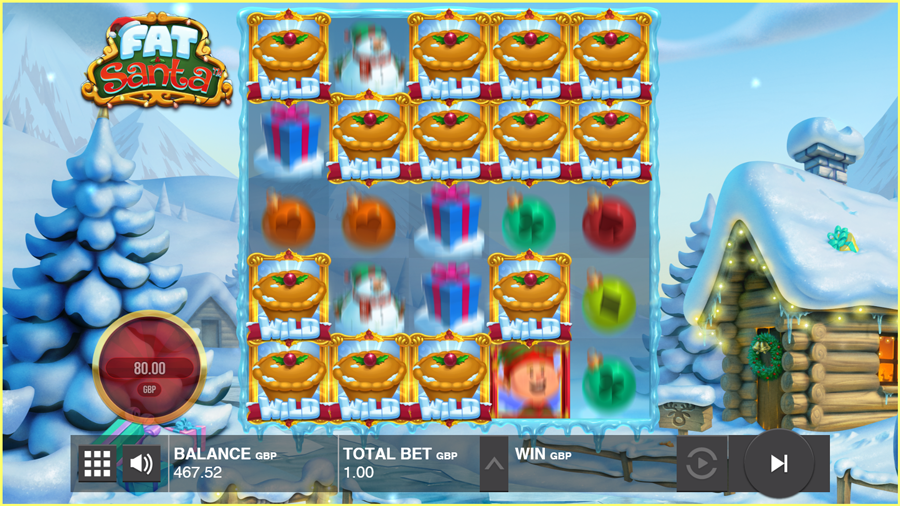 The main feature of the game is also the same as Fat Rabbit where you need to land a Santa on Reel 1 and then at least 1 mince pie on any of the other 4 reels to activate the bonus. Santa starts off the size of a regular 1×1 symbol, once you collect 5 mince pies the Santa grows to a 2×2 symbol as pictured below. 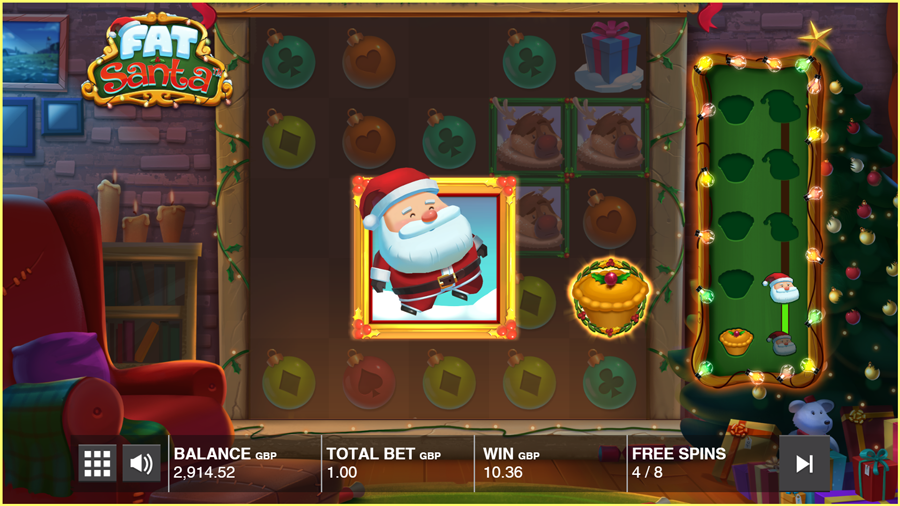 You are also awarded some extra free spins each time you go up a level, collect another 4 mince pies and he grows to 3×3 plus some more free spins as shown below. 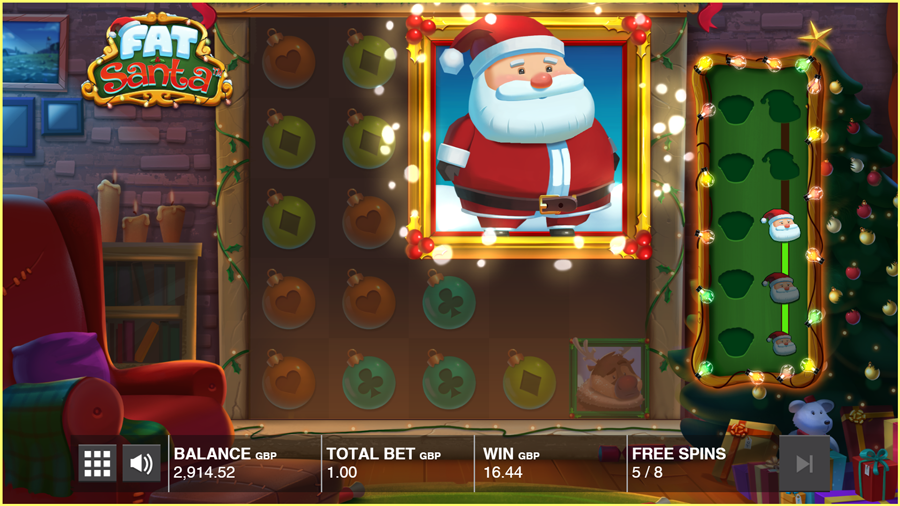 Collect another 4 mince pies and he grows to 4×4 and you get a couple of extra free spins and it’s now taking up most of the screen! Each of these win’s are going to be a mega win of at least 100x and more than likely a lot more. 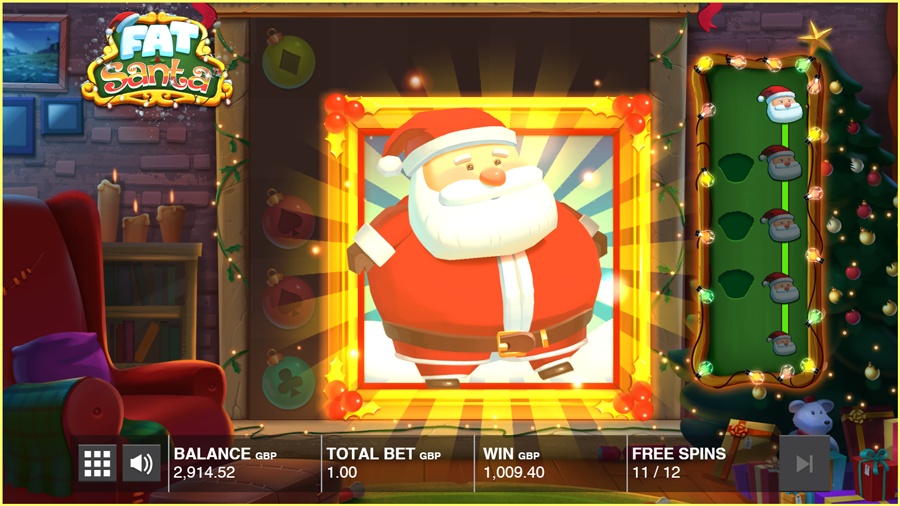 Collect just 3 more mince pies and you have a full screen wild Santa for as many spins as you have left! Thats where the super mega wins come in as each spin is now worth 1000x your stake!!! You can see below a total win of over 2000x stake, in this instance the Santa was only full screen for 1 spin so the other 1000x was from the spins leading up to this point, the max observed win in this game is 6405x and that was from the agency that test the games over millions of spins so its accurate but there could be room for a bit more, maybe 8000x with a perfect setup. 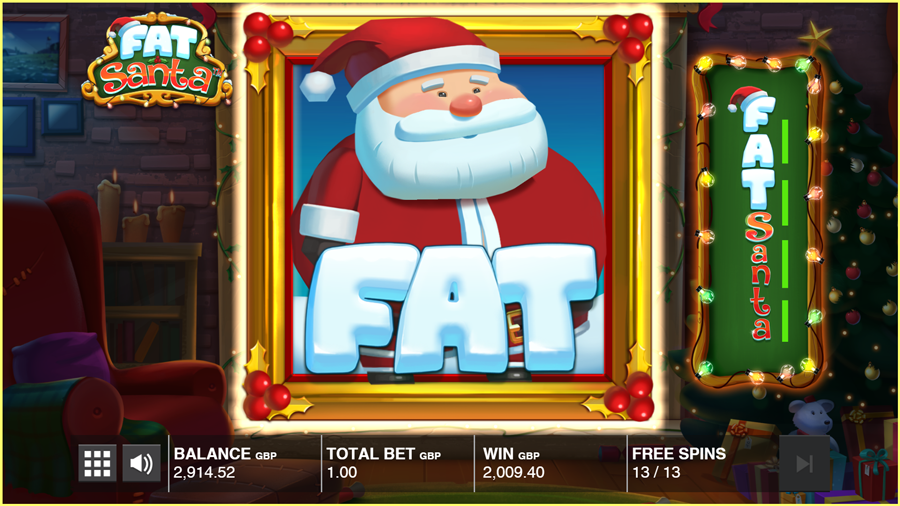 Push Gaming have finally bitten the bullet and joined in with feature buy option, this is now available on Fat Santa and the price is 80x your stake, this is basically the only difference between this slot and Fat Rabbit and to be honest I don’t see it as a bad thing as it’s nice to have the option sometimes when you just want to get into the bonus. 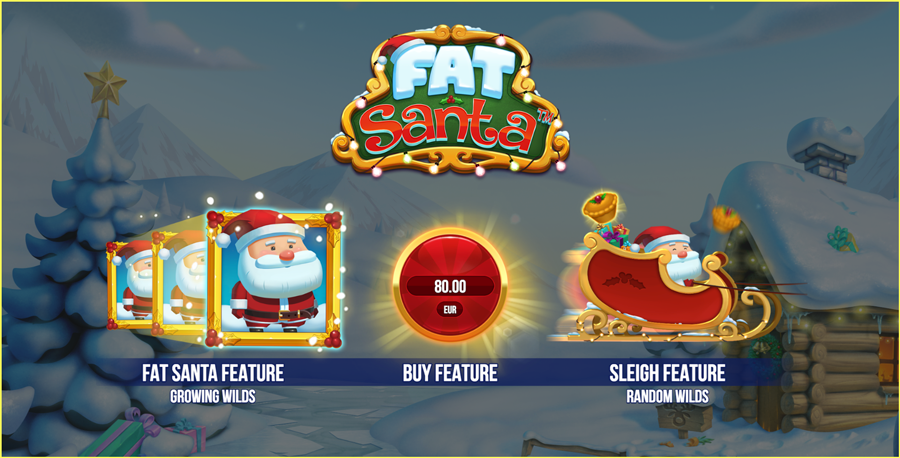 The paytable in Fat Santa is dynamic and adjusts with your bet size, the paytable pictured below is based on £1 a spin and starting at the bottom we have the green Clubs and Diamonds paying 1.6x your stake, the orange Heart and red Spade pay slightly more at 2x for a full line, the present pay’s 6x.

Now onto the premium symbols, we have the Snowman that pay’s 10x, Rudolph pay’s 16x, the Elf pay’s 20x and the Santa symbol that’s basically a wild symbol pay’s the same at 20x, when you get the full screen Santa you have 50 lines at 20x giving you 1000x per spin, this is the highest win possible per spin in the bonus round.

Fat Santa has an RTP of 96.45% and the volatility is rated medium which I’d agree with although if it’s anything like Fat Rabbit (which it obviously is!) then Id say this will feel like high variance on occasion when the bonuses and sleigh feature aren’t landing, the graphics and sounds are great and it’s exciting when you get a bonus waiting for the mince pies to land everywhere in anticipation of the Santa growing to his maximum size, it’s definitely going to replace Fat Rabbit for me and I’d expect to see it being played a lot over the coming season, if you fancy giving it a spin there’s a link below for a TGC trusted casino and the game will be live on the 27th November, thanks for reading and Merry Christmas!