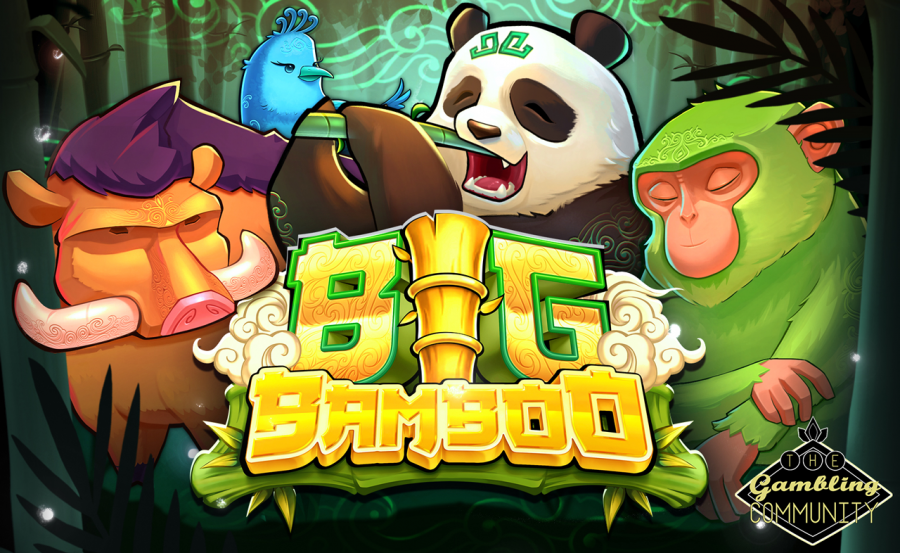 Delve into a zen-like experience, with a twist!

As you embrace the calm of Asian inspired surroundings, you’ll encounter deep secrets and vibrant riches hidden beneath plentiful bamboo that will spark your senses.

Sway to the rhythm of enchanting Japanese music as more and more surprises are revealed from magical Mystery Stacks, along with the chance to take unforgettable gambles. 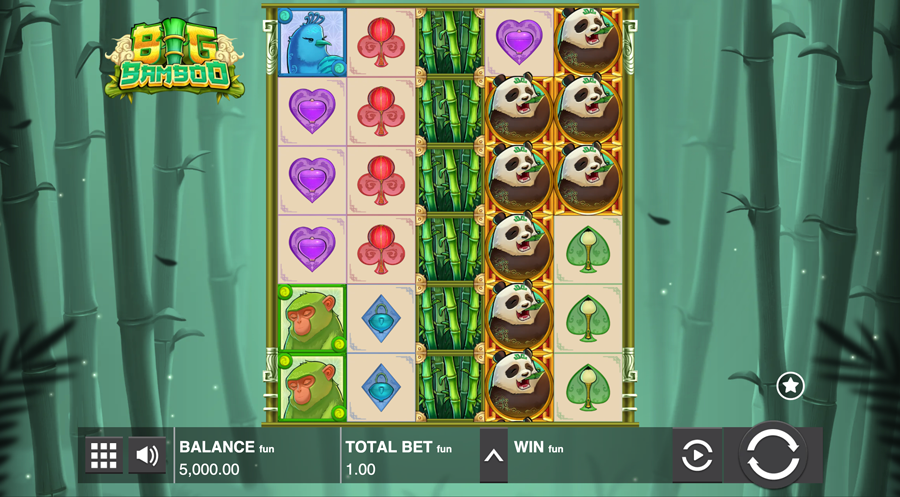 Big Bamboo is a 5×6 reel slot with 50 paylines. During the base game and feature there is a mystery bamboo symbol similar to the seaweed in Razor Shark. This symbol can land on any reel and can even take the whole screen up if full strips landed on all 5 reels, once revealed though they leave the next spin unlike Razor Shark.

When the mystery bamboo reveals golden bamboo you get another feature similar to Razor Shark where each position spins round to reveal one of 5 different prizes which we will take a look at now. 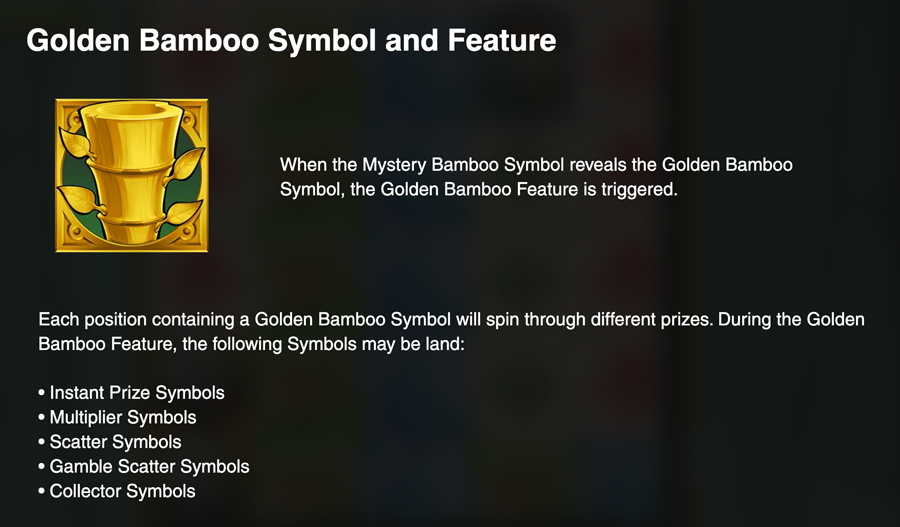 The instant prize symbol can reveal as little as 1x right the way up to 5,000x! These amounts can then be multiplied as you will see shortly.

When a multiplier symbol lands it will multiply all the other values by 2x, 3x, 5x or 10x before removing itself and re-spinning to land another prize. To win the top prize you would need a 5,000x coin and a 10x multiplier in the base game, in the feature it can be done another way which we will get too.

The collector symbol will then remain on the reels throughout the golden bamboo bonus while the empty positions spin again to give you more prizes! 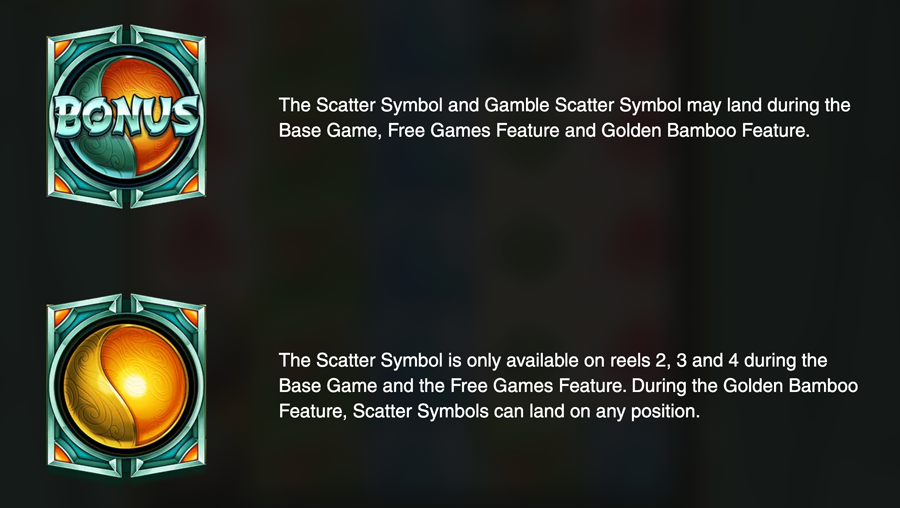 During the base game when there is a scatter on reel 2 and 3 the gamble scatter may land on reel 4. When it lands it will spin through all the 3 different starting points for a feature along with a blank.

Big Bamboo also has a gamble feature which is triggered when you win the bonus with less than 4 dots. The gamble wheel is presented with various upgrades depending how many dots you landed, 4 being the maximum which will skip the gamble as its the best feature available. Be warned you can lose the entire bonus using the gamble and will return to the base game empty handed! 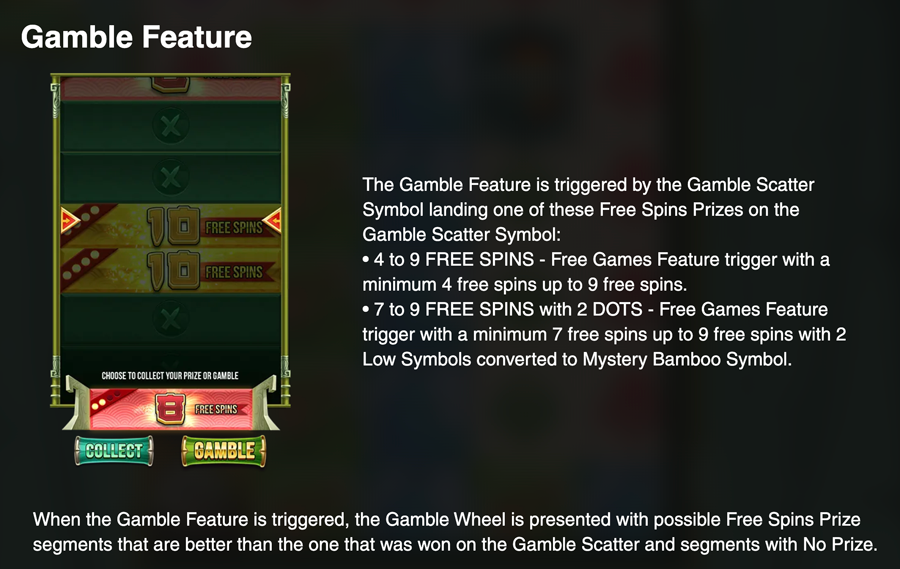 During the free spins you want scatters to land to collect dots, the more you get the more low paying symbols are converted into mystery bamboo. 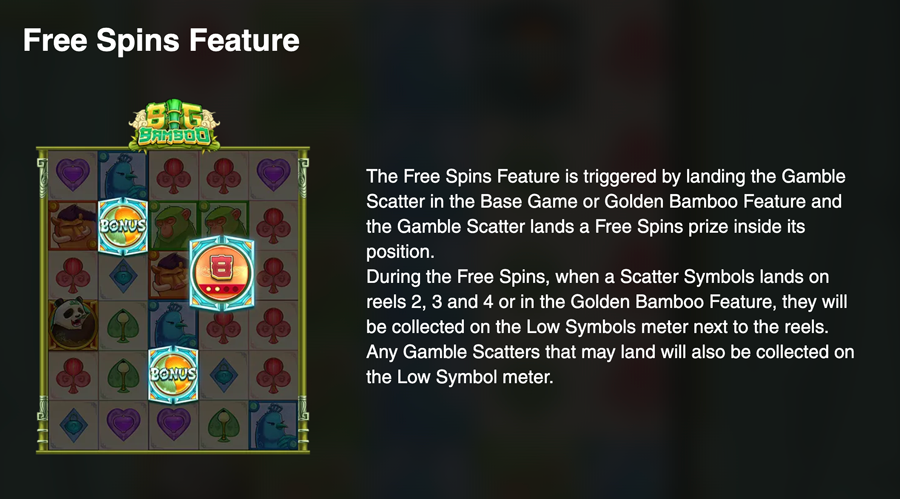 The gamble scatter can also award extra spins during the free spin feature, the amounts available are +1, +2 and +3 spins. 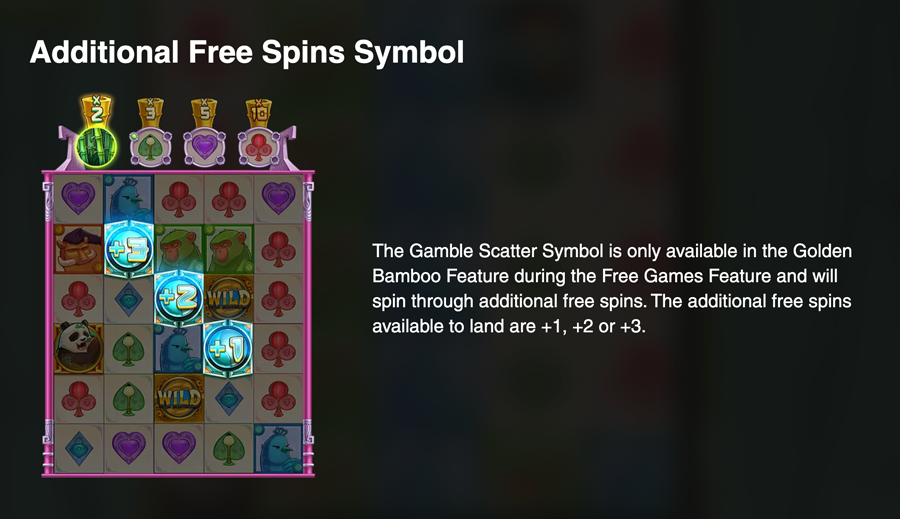 The paytable in Big Bamboo is dynamic and changes with your stake and as you’ll see this slot has an incredible gap between the top symbol and the bottom symbols.

Starting with the lower paying suits we have the diamond, spade, heart and club all paying a measly 0.40x stake for a full line.

The premiums start with the Blue Bird paying 12x stake for a full line, the Green Monkey pays 16x, the Orange Wart Hog pays 20x and then there’s a huge leap to the Panda and Wild symbol that both pay a whopping 150x for a full line.

Big Bamboo has an RTP of 96.13% and Push Gaming rate the volatility as high, I rate it as super high as during my test play there had been patches of dead spins that could easily take 100x stake off you, on the flipside the maximum win is 50,000x stake so I’m quite happy playing it and taking that risk.

Would I play this again, 100% I would, especially after seeing Rocknrolla win over 2,000x on it a few days ago. For me slots like this tick all the boxes as I don’t need to be on a huge stake to win a serious amount of money, and as a slot player that is very appealing to me. The music and graphics are classic Push Gaming and it has a polished feel to it, overall I’d give it a solid 9 out of 10 just for the effort that’s gone into mixing all the different mechanics together in a way that works.

As always thanks for reading and if you fancy saving the Pandas there is a link below to a TGC trusted casino so you can be sure to be paid should you hit the bamboo motherload!