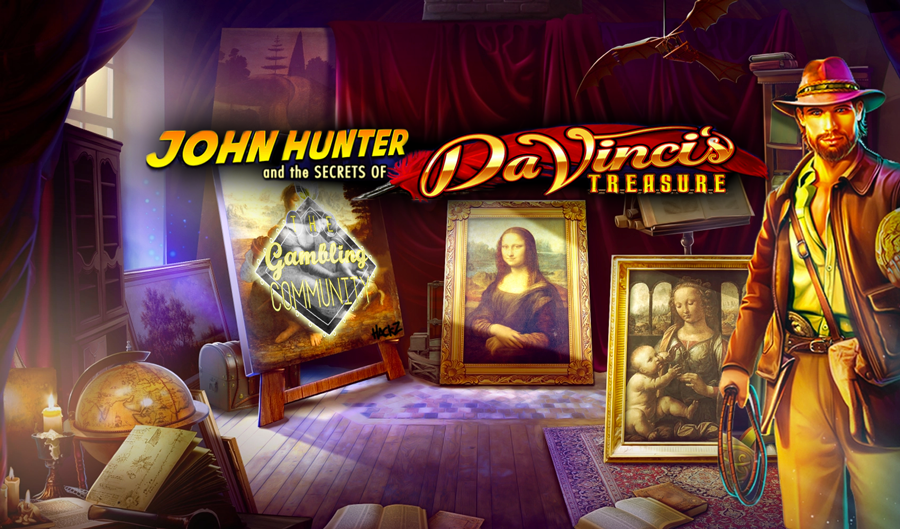 I mentioned in a recent review of Madame Destiny that their’s a new game coming from Pragmatic Play that has the potential for a 48’000x stake win, and here it is, John Hunter and the secrets of Da Vinci’s Treasure! For the rest of the review I will simply refer to the slot as Da Vinci’s Treasure as I think the name is too much of a mouthful, let’s get exploring and see what Mr Hunter has to offer! 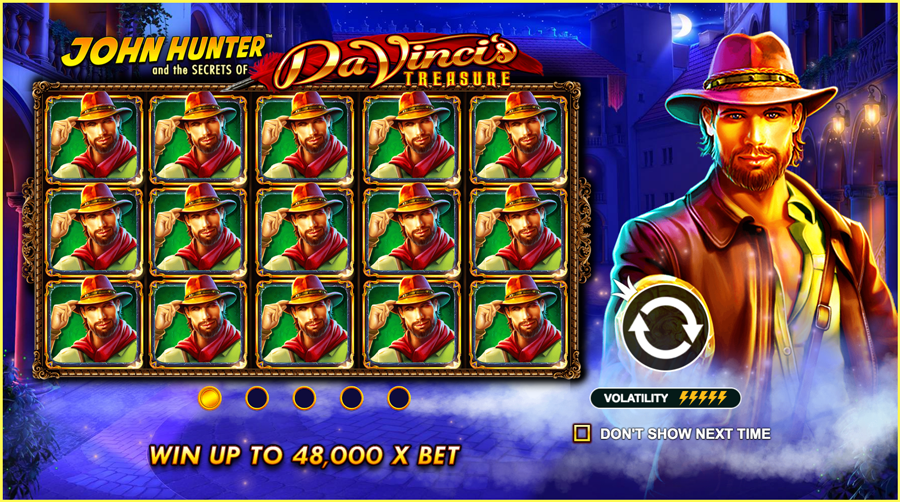 Da Vinci’s Treasure is a 5 reel by 3 row slot and has 25 fixed payline’s, there are 3 different features in this slot and to get one of them you need to land 3 of the Cryptex scatters that are present on the middle 3 reels. The first feature is called the prize picker, you have 3 different Da Vinci paintings to pick from, each one hides a multiplier, the largest award I seen while testing was 30x and the lowest was 8x, on average I’d say it was 20x, this is the feature you want to avoid! 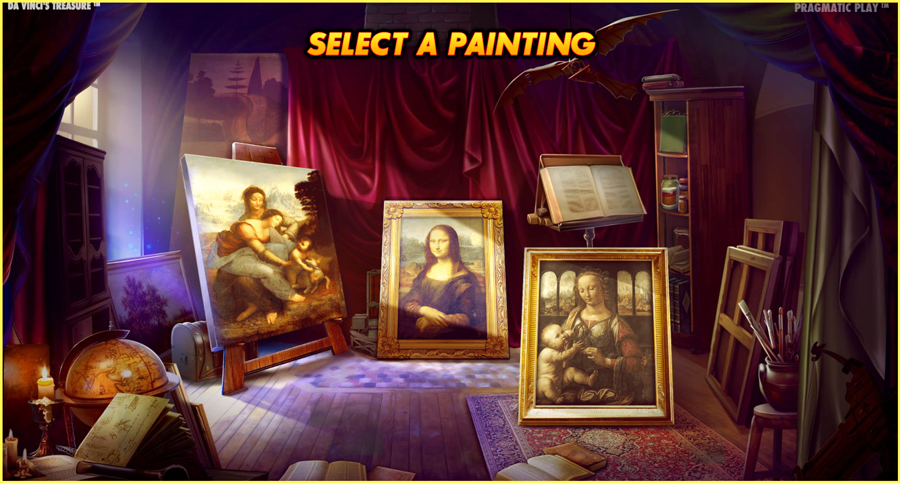 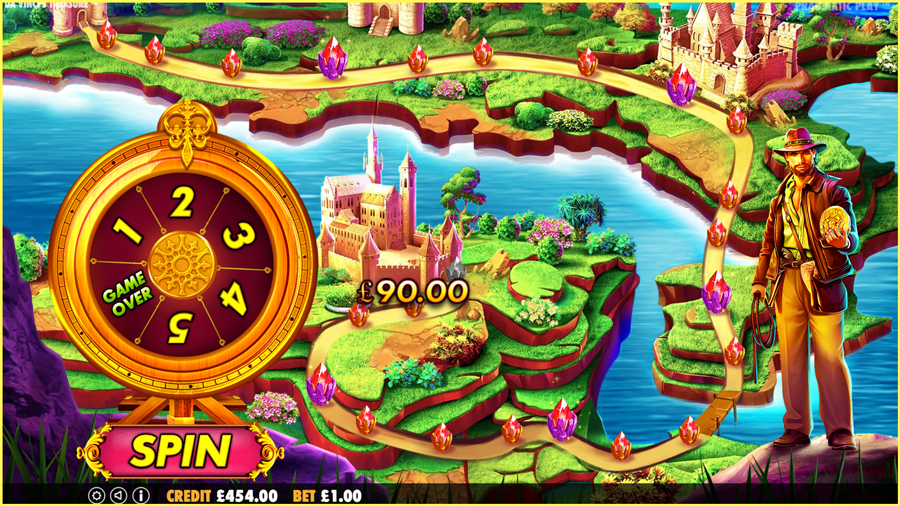 Now the final and most exciting feature is the progressive free spins, this is where the true potential lies with this slot, you start with 12 freespin’s and each spin your multiplier goes up 1x, should you get a retrigger you get an additional 12 spins up to a maximum of 60 which means your final spin would be at 60x your stake! Land the full screen of the hero hunter on this spin and you’ve bagged yourself the 48’000x jackpot! 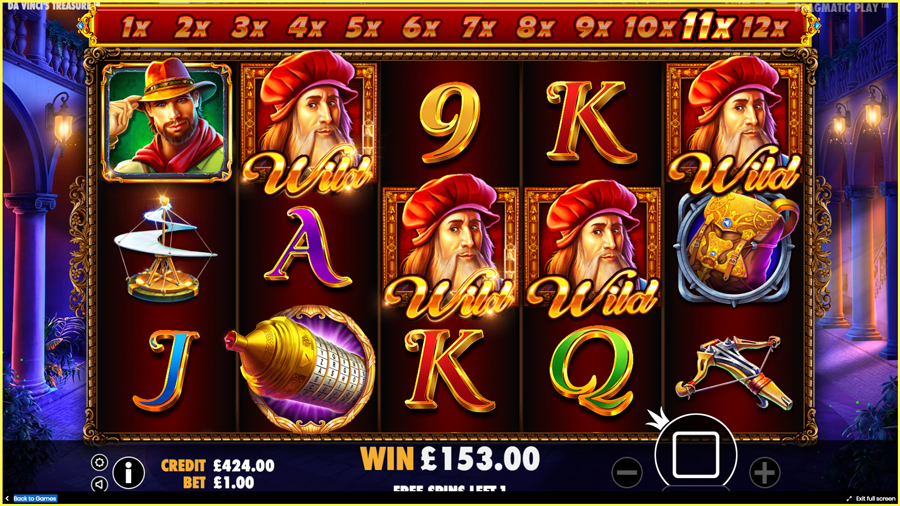 The paytable for Da Vinci’s treasure is dynamic and adjusts with your bet size, the below is based on £1 spin’s. Starting with the lowest paying symbols we have the 9’s, 10’s and J’s paying 4x for a full line and Q’s, K’s and A’s paying 6x your stake, the crossbow and little spinning device pay double this at 12x. The backpack and book symbols both pay 20x and finally we have John Hunter the star of the show who is also stacked on all reels paying 32x for a 5 of a kind, for a basic full screen with no multiplier you would win 800x but of course the idea is to get that win with some sort of multiplier in the freespin’s! 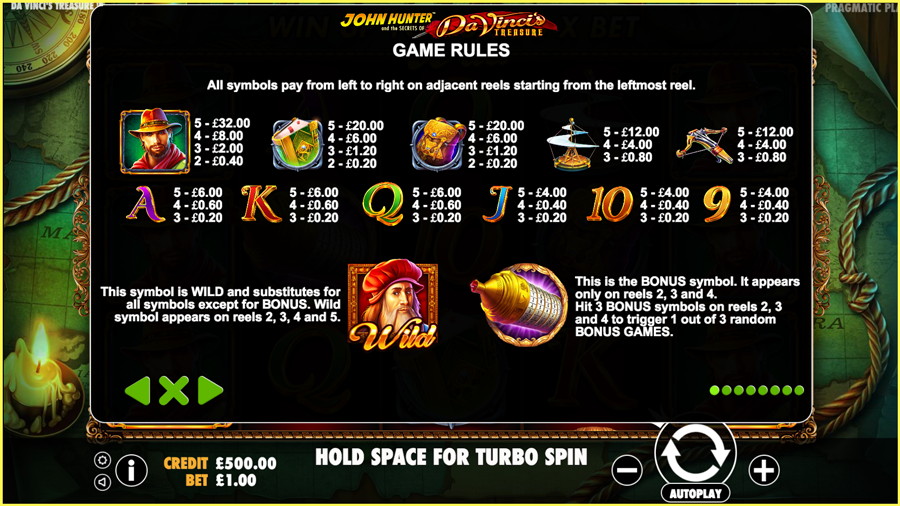 Da Vinci’s treasure has an RTP of 96.53% and has a volatility rating of 5 and it’s firmly in the high variance category with it’s huge potential. The graphics and sound’s are really nice and it play’s very smooth even on the turbo mode which is unbelievably fast, during my testing I had several wins of around 200x my stake and the bonus landed frequently for such a high variance game, the only thing I got rather tired of was the map bonus as it takes a while to play and I was getting frustrated as I just wanted the progressive freespin’s, in it’s defence though you are offered a gamble feature after and if you choose 5x and pick correctly then the win is obviously very respectable, it’s still not that 48’000x that we would all like though! To round the review up this is a game I will play in the future and I’m sure you will see it on the streams very soon, if you fancy a go their’s a link below and as always thanks for reading, cheers!