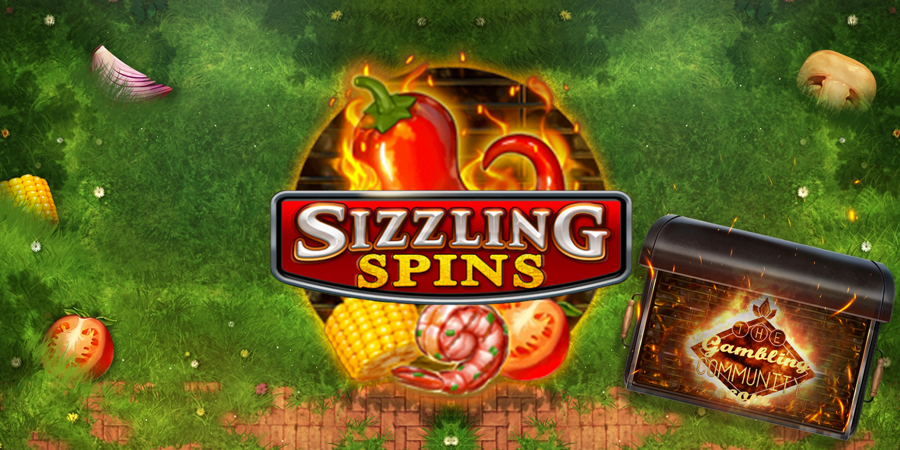 Sizzling Spins is a brand new slot release from the provider PlaynGo who made the well known Book of Dead and hugely successful Reactoonz. This summery slot is set in your own back garden where all the action takes place on the barbecue so grab some coal, open a beer and lets slip another shrimp on the barbie mate!

Sizzling Spins is a 243 way slot with the classic 5 reel by 3 row setup but similar to some other games like Terminator 2, it transforms to a 4 row configuration during the freespins giving you a massive 1024 ways to win! During the base game you have 1 random reel with extra heat and this glow’s with fire, should a foil packet land on this reel it unwraps to reveal a wild symbol and you get a free re-spin where the wild sticks and another reel glows, if a wild packet lands on that reel you get another re-spin and so on until you either get the full 5 reels with a wild on or you get a spin without one landing on the ‘hot’ reel, if you do get the full 5 reels with a wild packet the final win is also doubled! I actually had this happen early into testing the game and it was a lot of fun to see them land and unwrap whilst the win got progressively bigger each spin. 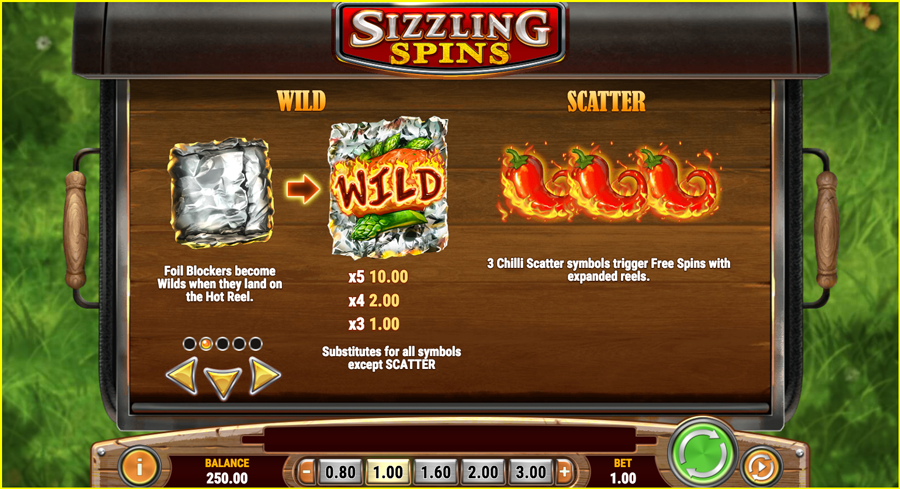 Now the main feature is the freespins which you win by landing 3 chilli scatters, the scatters are only on the first, middle and last reel so you can’t get 4 or 5 but you don’t need more than 3 for extra spins as each feature has the chance of 3 different outcomes! You get 3 chilli’s to pick from and a chance to win either 8, 10 or 12 freespins, during the feature you have the extra row and all wild packets are already unwrapped meaning you don’t need them to land on a hot reel to count, the good part is that the re-spin feature is still active for any that do land on a hot reel and on top of this your multiplier grows as you collect any chilli’s that land during the spins up to a maximum of 5x! 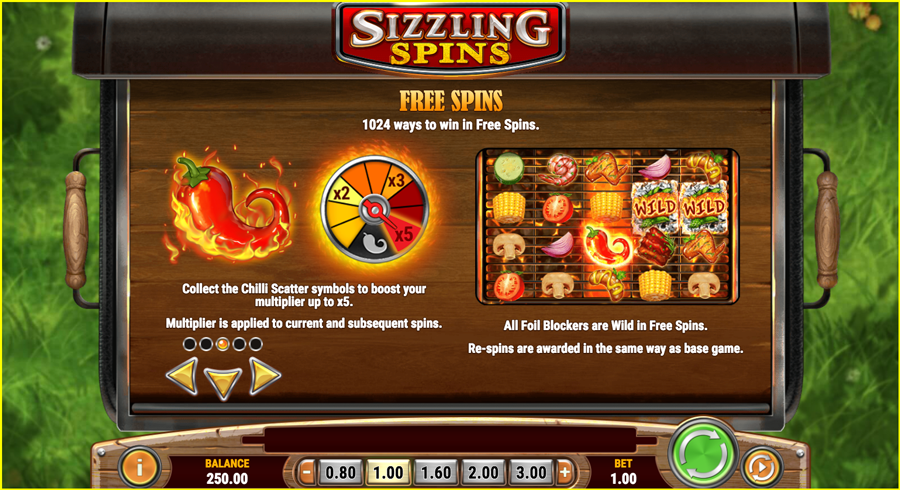 The paytable on Sizzling Spins is dynamic and adjusts automatically when you change your bet size, the figures below were based on a £1 spin. Looking at the symbols from right to left you can see they pay less than 1x for 5 of a kind but you can have more than one on a reel, add to that frequent wilds and you can end up with some pretty big multiples of each symbol in a single spin. 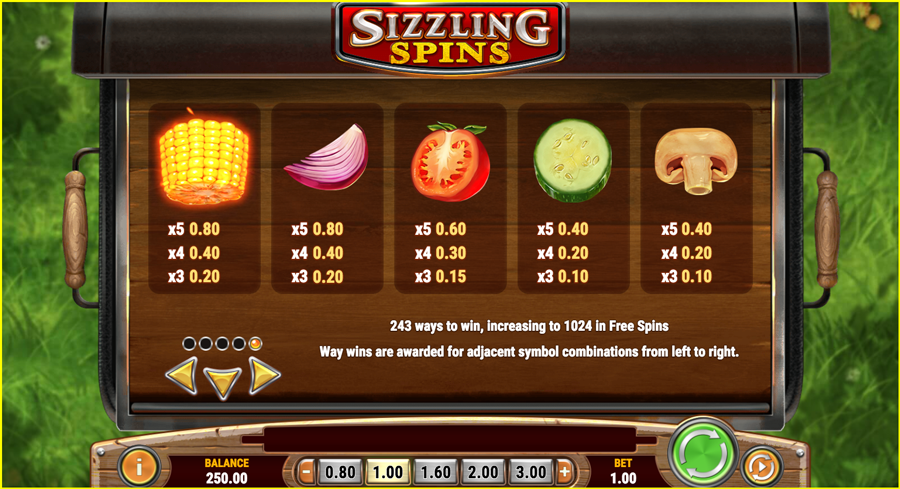 Moving on to the premium symbols you’re immediately hit with how much of a premium these pay, the lowest of these being the shrimp we tossed on the barbie earlier at 2x and the best being the pork belly ribs at 10x. Now you might be thinking wheres the potential but on my first bonus on this game and without going above a 2x multiplier I racked up (excuse the pun) a win of 400x my stake! My next bonus I got 100x and then on another day playing at another site I hit 200x so this game is exactly what it’s called, sizzling!! The maximum win is 5000x which is more than enough to tickle the tastebuds of most seasoned players and Iv already added this to my go-to games list. 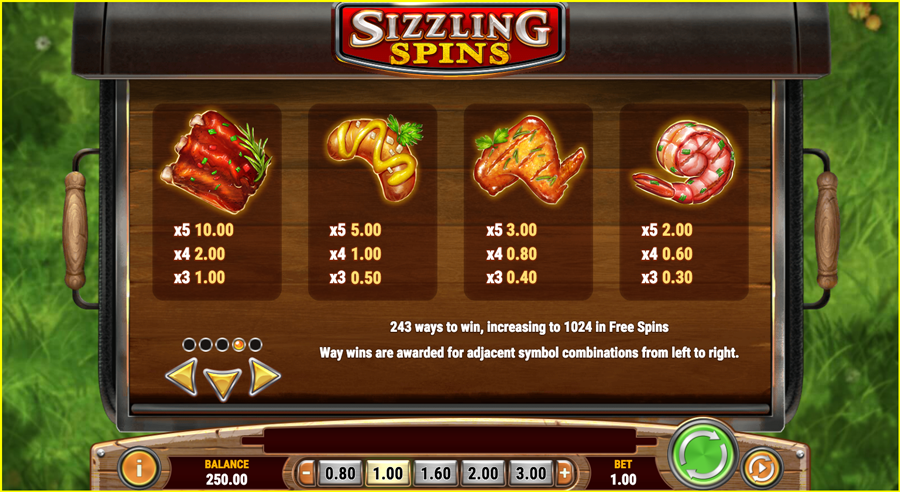 Sizzling Spins has an RTP of 96.49% and should definitely be categorised as high variance due to the win potential, however to me it felt like a medium variance game with plenty of base game wins and frequent re-spins. The graphics are really nice and the sizzling sound on spins added to the theme nicely without being annoying, for such a simple concept I was pleasantly surprised by how satisfying it is and I really do like everything about this game which is unusual for me! If you fancy giving it a spin there’s a link below and as always thanks for reading.