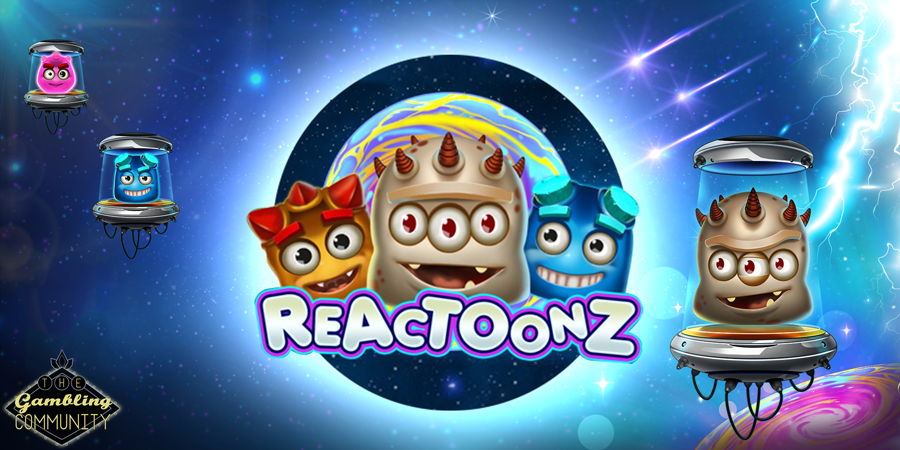 Reactoonz from PlaynGo is a sequel to Energoonz that’s still fairly new to the mass market and lots of players still wonder what is actually going on when they see it on streams! So let’s see if we can clear up exactly how you win, what all the different features are and what exactly is a Gargantoon!

Reactoonz is not like a regular slot as it plays on 7×7 grid where 49 symbols drop down onto the grid each spin and if you match 5 or more the same that are adjacent to each other they react and explode letting more symbols cascade down which in turn can form chain reactions of wins. Each time you get a win there is a meter on the right hand side that fills up roughly a quarter of the way per win and if you fill it completely you get 1 of 4 different features added that play once you have no more reactions left. Theres also a random feature called instability where you are awarded up to 8 wilds that can land anywhere, sometimes even in a cluster which is nice! As you can see above there are 4 different colours that glow in the quantum meter and each one represents a different feature, the order in which they come is completely random and after a while of playing I would say my favourite is blue as it changes 13 symbols and if you’re lucky it changes them to wilds! You can get quantum features queued up if you keep getting enough wins and if you successfully fill the meter to the 5th reaction you get the Gargantoon which is a 3×3 wild symbol, on the second cascade after Gargantoon unlocked he appears as two 2×2 symbols and on the third cascade he appears as 9 single symbols. This is basically the whole reason you play the game, to unlock him in the hope that he lands next to lots of premium symbols, the pink one to be specific!

The paytable in Reactoonz is dynamic and the below figures are based on a £1 spin. The 4 one eyed symbols don’t pay particularly well and you’re basically using clusters of them to fill the quantum meter up in the hope of unlocking Gargantoon. Should you get a block of 4 of any of the symbols your win for that reaction is doubled, the max win you can achieve in 1 spin is 1500x your stake, this is won by having a cluster of at least 15 pink symbols with a block of at least 4 of them to double it.

Below is Gargantoon unlocked on the grid, the total win ended up being 150x although its not uncommon to see a win of only 50-75x. However theres also plenty of examples of wins well over a 1000x too so it comes with the variance, one of the main plus points for this game is its impossible to get the Gargantoon feature and win nothing which of course you can do on regular slots with the freespin features. Reactoonz has an RTP of 96.51% and Id class it as the very highest of medium variances, meaning it can go on long cold streaks paying back the player very little but at the same time the max win is 1500x your stake so it can never be true high variance. I enjoyed playing it and watching the reactions is all the more fun when you know what each colour does in the quantum features, however after a few hundred spins I found it did become rather monotonous, I was never a fan of Candy Crush or Tetris though so for other players that are this may well be one of your new favourite games. That concludes this space adventure so thanks for reading and if you fancy unlocking the Gargantoon theres a link below, stay lucky and keep it responsible, cheers!