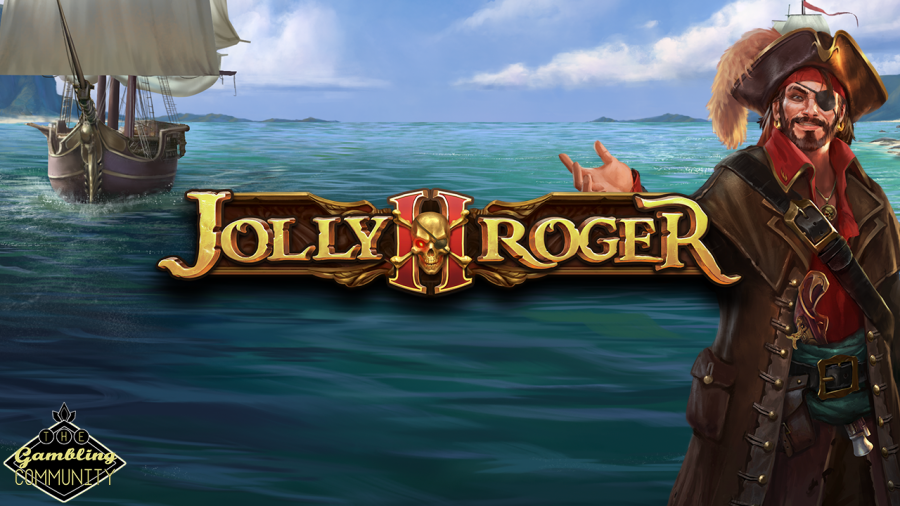 Ahoy there, join Red Roger as he travels the seven seas in search of freedom, adventure and all the riches his ship can carry in Jolly Roger 2. PlaynGo have kindly given me early access to one of their latest slots, it’s called Jolly Roger 2 and it’s due to be released on the 27th August 2020 so let’s jump on board and set sail me hearties! 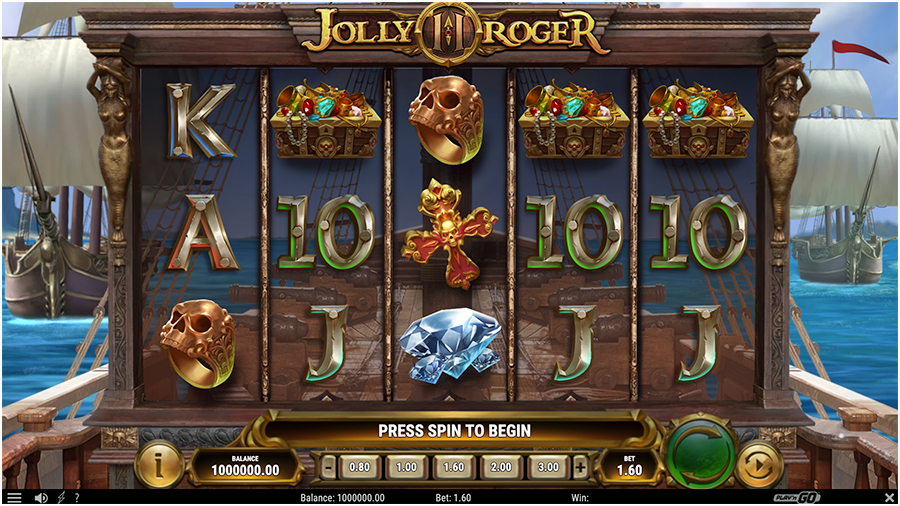 Jolly Roger 2 is a 5×3 video slot played along twenty pay lines and is the sequel to Jolly Roger. It’s an exciting pirate themed slot with lots of swashbuckling features and plenty of action to keep players on their toes. Captain Red Roger is the in-game Scatter, he lands on reels 1, 3 and 5, and he will launch one of the game’s special features, let’s take a look at those first. 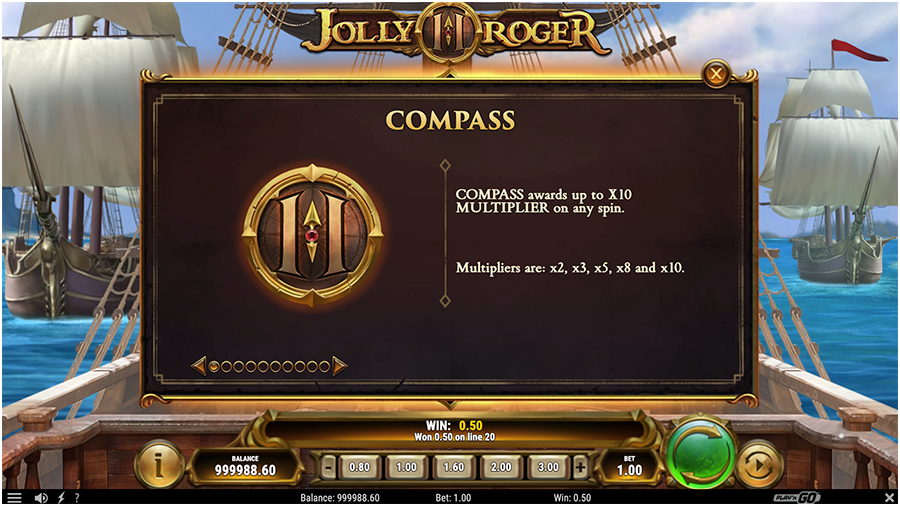 The Sea Compass is a multiplier reel which can activate on ANY spin and award a random multiplier and any featured wins by up to 10x the player’s stake! 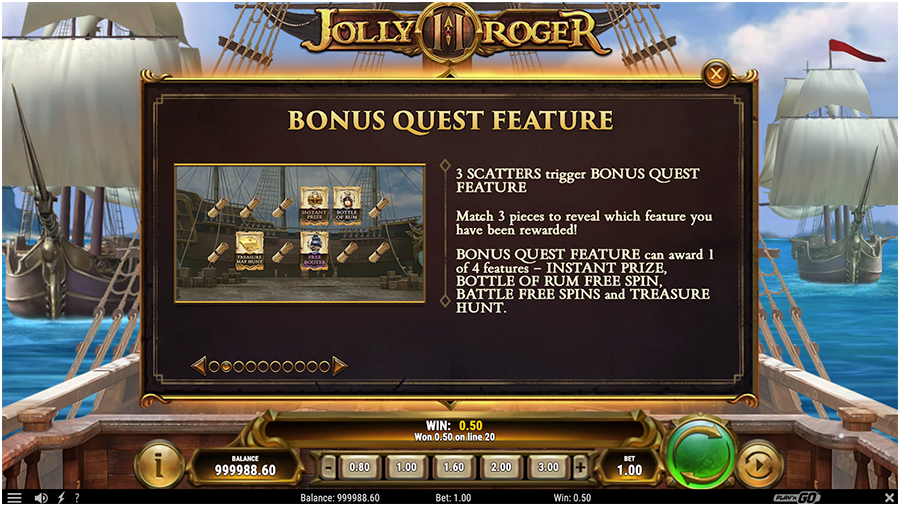 Landing three Scatters on reels 1, 3 and 5 will trigger the Bonus Quest mini-feature.

Once triggered, Red Roger himself will invite players to take part in a unique quest of their own choice. Players are invited to pick from several rolled-up scrolls, each containing one of the quests listed below; matching three of the same quest will begin the feature.

There are four different quests to choose from, Bottle of Rum, Freebooter Spins, Instant Prize and the Treasure Map Hunt. 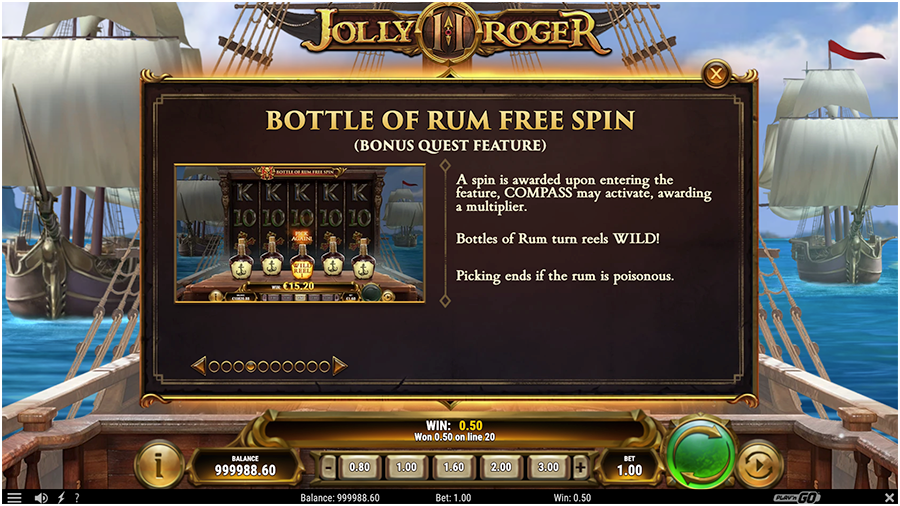 If Bottle of Rum is selected, players must pick from five bottles of rum (one for each reel), if they uncork the bottle, it will unleash a stack of Wilds onto its reel and then pick again. If the bottle doesn’t uncork, then the feature will be over. 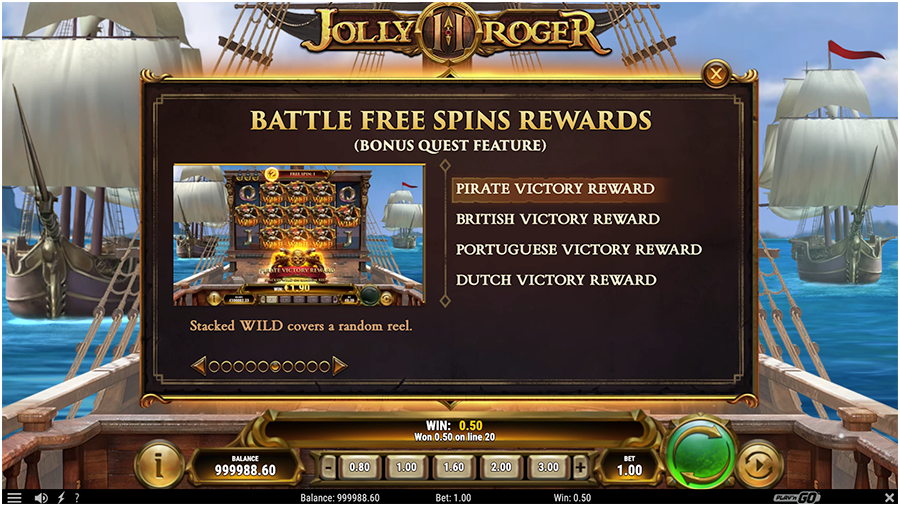 If a player chooses Freebooter Spins, they will battle against the armadas of England, Portugal and the Netherlands, or pillage a Merchant Ship for a chance to plunder even more booty!

The feature gives players three lives at the start and one of the ships is randomly chosen to select who they go up against. Whether they win or lose the battle determines what reel modifier they get during the spins

If the Merchant Ship is chosen the player automatically wins but, if the Dutch, Portuguese or British ships are selected the battle will begin!

The battles take place on a 3×3 grid, and each row will be a best of 3 contest between the pirate’s symbol and the armada’s symbol; the side with the most symbols on the grid wins.

If the Armadas win, the player’s will lose a life, if the pirate’s win they can gain their life back but can only have a maximum of three lives.

After each battle the player will get a spin using the winner’s reel modifier:

Pirate Ship: Fully stacked Wilds will be placed on a random reel.

British Armada: All HP symbols will be upgraded to the highest symbol.

Portuguese Armada: Will select one or two symbols and turn all instances of them on the grid into Wilds.

The feature continues until the player loses all three lives. 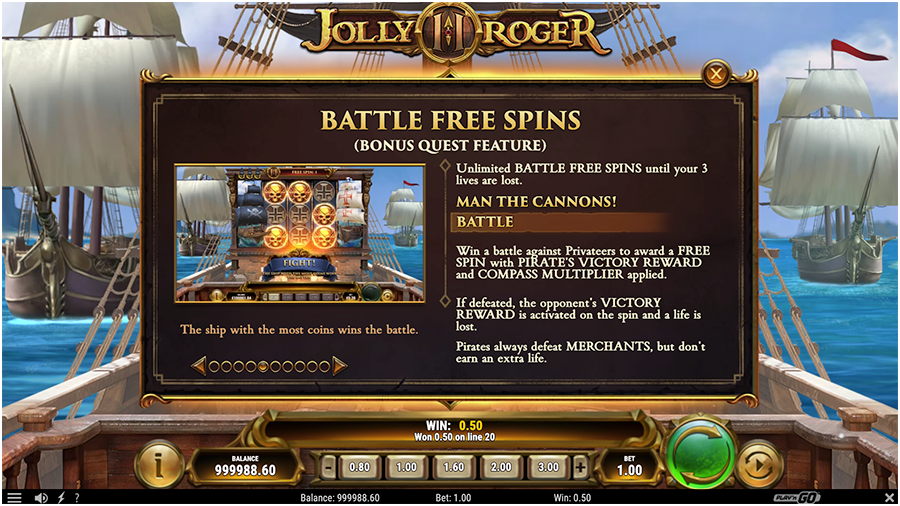 Revealing Treasure Map symbols will activate the Treasure Map Hunt quest, a free spin feature where players will sail the seven seas in search of their fortune.

Treasure Map Hunt will award an initial ten free spins. During the free spins, they will have to collect four pieces of the treasure map to find where the treasure is buried.

Once the map is complete, it will uncover a treasure chest, containing a reel modifier that will be applied to the remaining free spins. The modifiers are either the Sea Compass multiplier wheel or a symbol upgrade (LP upgraded to Wild, HPs upgraded to most valuable HP).

Each time the treasure map is completed, it will award more free spins. The first six times will award two additional spins, and then on the seventh time, it will award five extra spins. 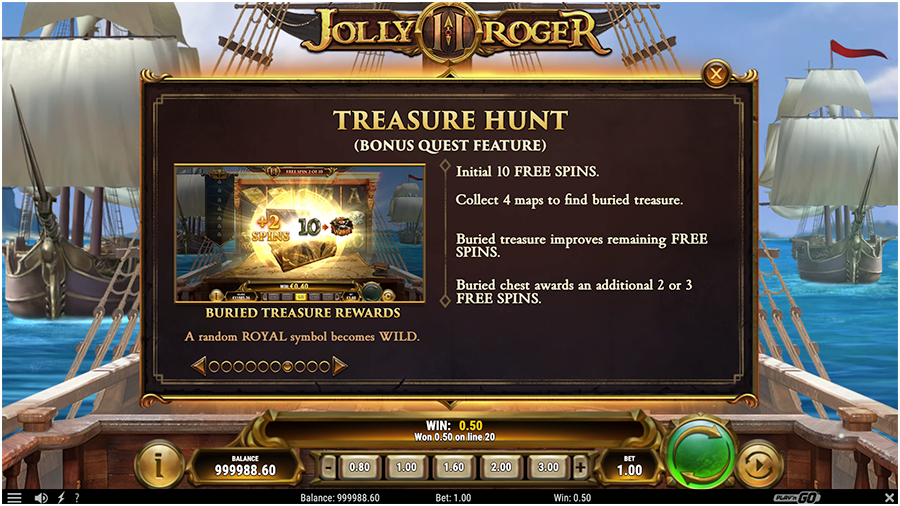 The paytable in Jolly Roger 2 is dynamic and changes with your stake in real time, so what you see is exactly what you get, starting with the lower paying symbols first we have the 10’s and J’s paying 1x your stake for 5 of a kind, the Q’s pay 1.5x, the K’s pay 2x and the A’s pay slightly more at 2.5x your stake for a full line. 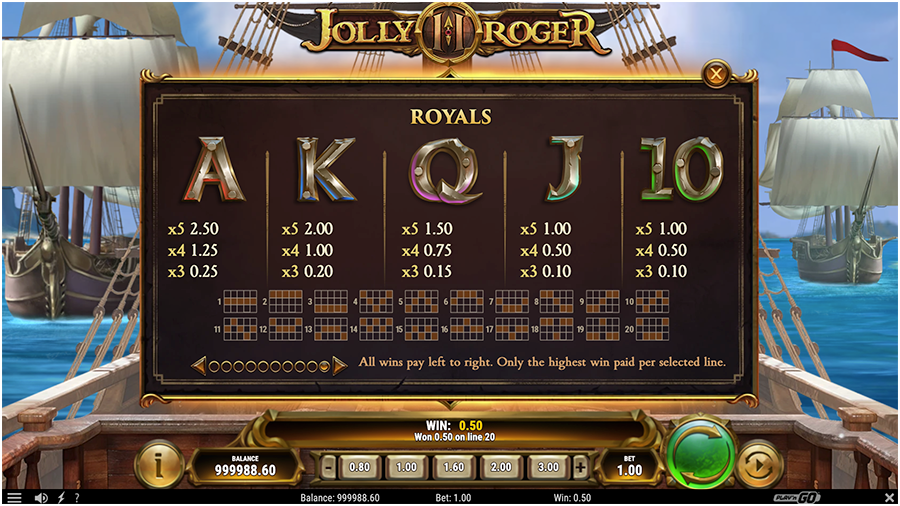 Now moving on to the premium symbols we have the Skull Ring paying 5x, the Cross paying 6x, the Diamonds 7.5x and the treasure chest pays 10x 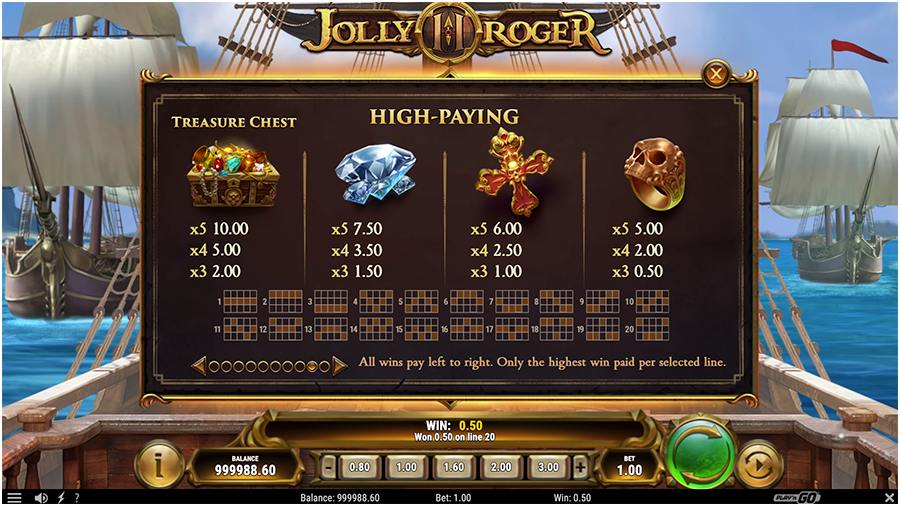 The Wild symbol pays the same as the Treasure Chest at 10x and the Scatters pay nothing, the Treasure Map is also only on the reels during the Treasure Hunt feature. 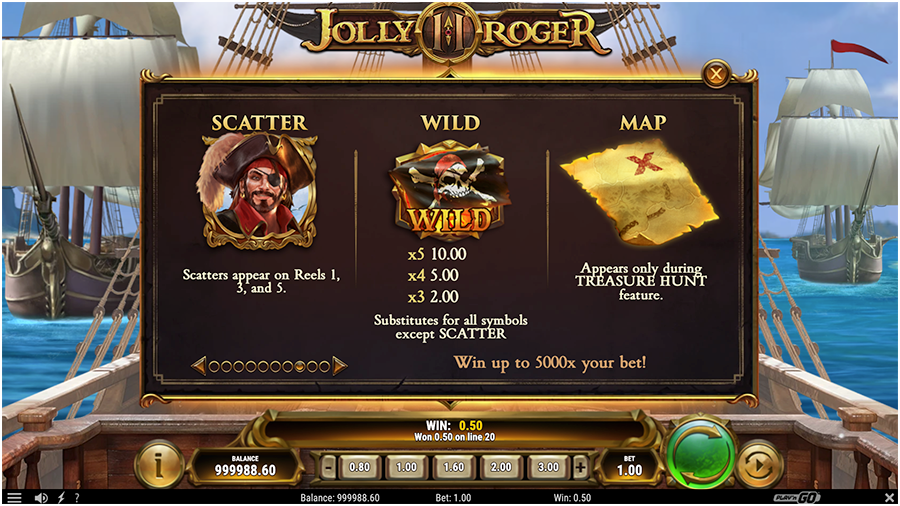 Jolly Roger 2 has a default RTP of 96.20% and I’d put it in the higher end of medium variance even though the max win is still very respectable for that volatility at 5000x total stake, PlaynGo rate it as 6/10.

As always, thanks for reading and shiver me timbers!