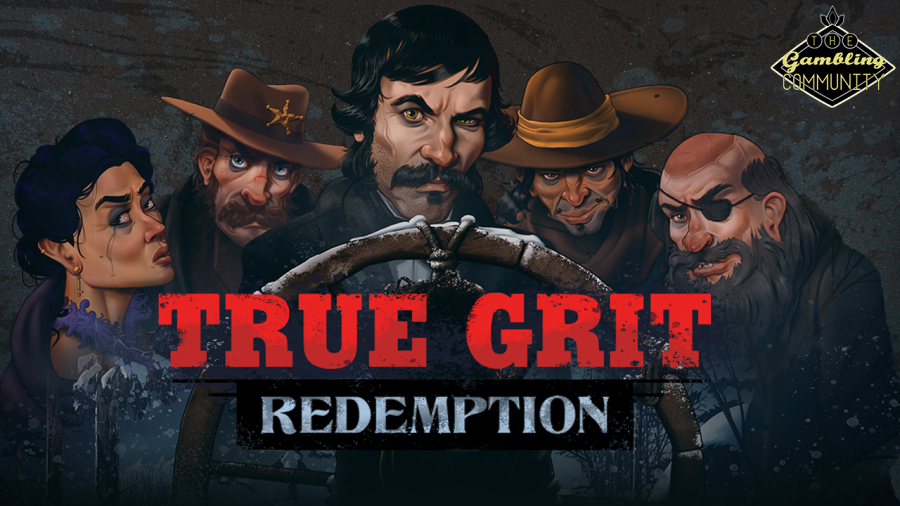 A mission for vengeance develops into a harrowing journey where the crew’s grit is tested. Will you join them on their quest for redemption, where the stakes are high and the guns blazing? 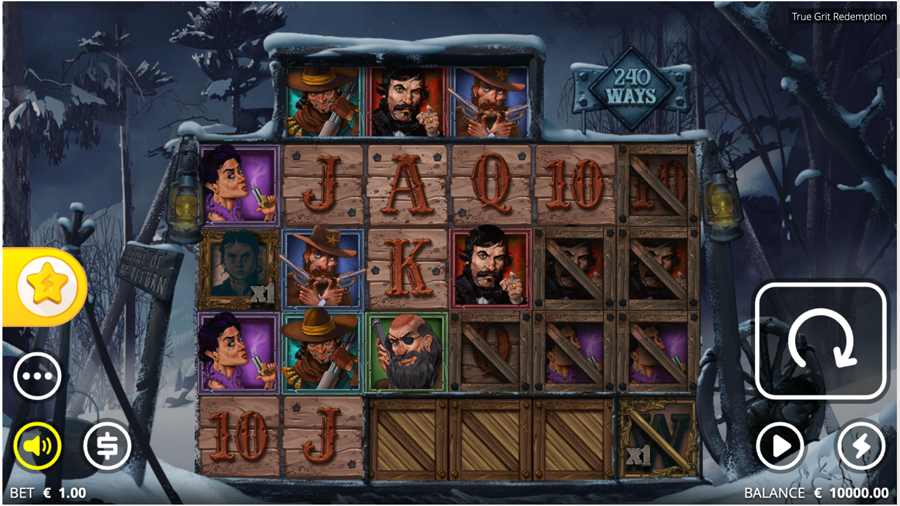 True Grit Redemption has 6 reels and a 4-5-4-3-1 row setup which can expand to 4-5-5-5-4-4 with reel modifiers. The three positions above reels 2, 3 and 4 only hold premium symbols and wilds. If the symbol in the top reel matches a symbol in the main reel below then both symbols will turn into wilds.

During the base game the main reel area can land all regular symbols, wilds, scatters and the grit girl which we’ll get to shortly. These symbols are affected by the special symbols in the top and bottom reel.

The special symbols that may appear on the bottom reels are xNudge Wild, Transform ’em, Reel Split, xWays and Infectious xWays. The sticky wild with a multiplier will unlock during Dead Spins and the multiplier increases with +1 for each and every cascade.

Wild Transform is simple, match the symbol in the top reel and the symbol underneath on the same reel to transform both into a wild symbol.

A stacked Wild symbol exists in the bottom reel that will always nudge to fully visible. Each nudge increases a Wild multiplier by 1. If it nudges over a wild an extra +1 will be added to the Wild Multiplier, Split Wilds will be counted as 1 for additional xNudge multiplier. 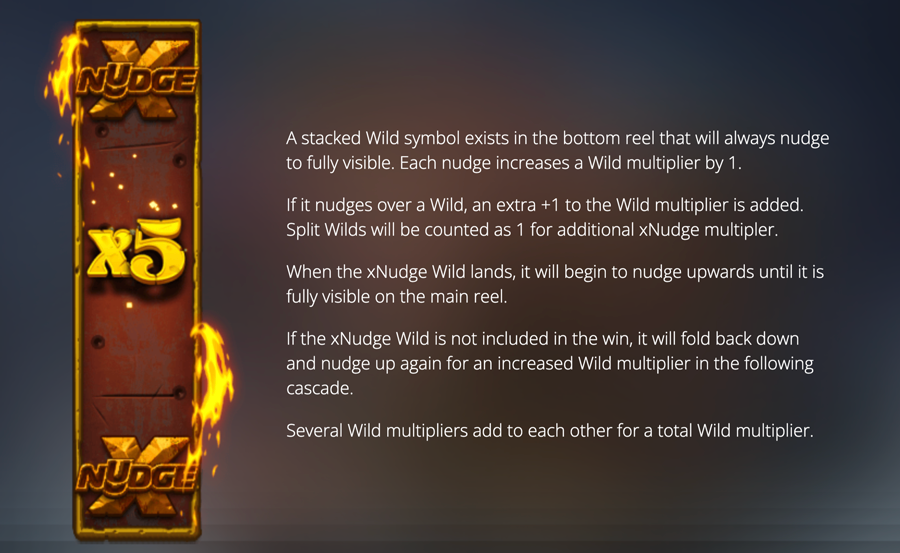 Another feature of this game is xWays and Infectious xWays which you may have seen in previous Nolimit games like East Coast vs West Coast. xWays can appear anywhere but the top reel and the Infectious xWays symbol can only appear on the bottom reel positions. xWays symbols will transform into a normal paying symbol. It will reveal 2 or 3 symbols of the same kind and increase the number of win ways. 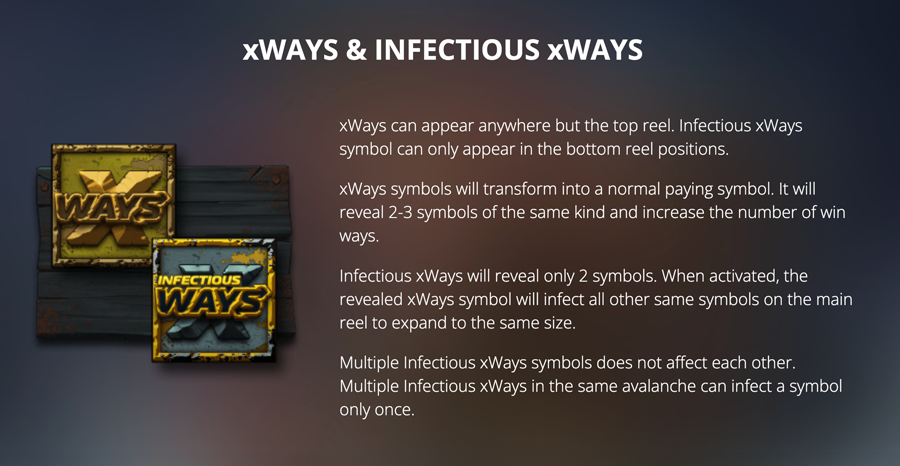 Reel Split will double all symbols above it on the main reel. It then vanishes causing the bottom reel to collapse to the left. The Reel Split symbol can only appear on the bottom reel positions. Each reel can split a maximum of two times and Reel Split does not split the Grit Girl symbol, instead it doubles it’s payout multiplier. 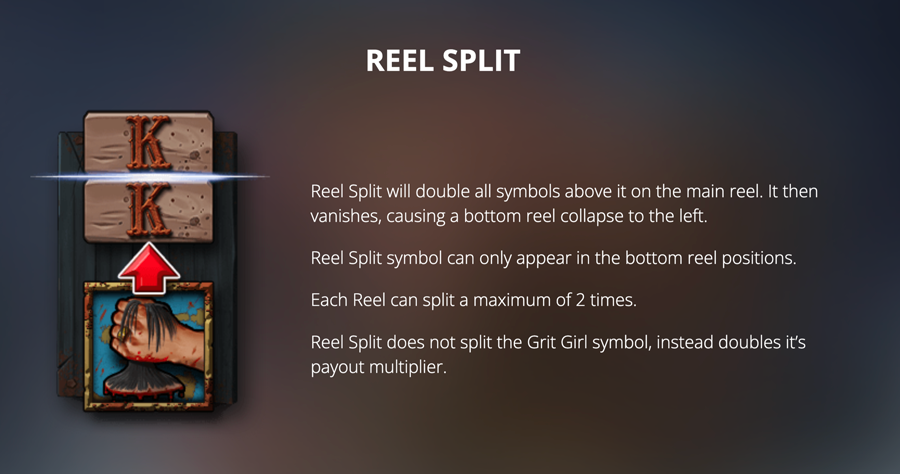 The Transform ‘Em symbol can only appear in the bottom reel positions and will turn into the same symbol upon transformation.

Now were going to look at the main attraction, the Grit Girl! Grit Girl can only land on reels 1-4 on the main reel set and doesn’t pay like other symbols, it pays as soon as she lands on at least 3 reels, a bit like a hybrid scatter!

Land Grit Girl on 3 reels will pay 25x stake, land her on 4 reels and you’ll get a tasty 500x stake for your trouble. Any wins with Grit Girl will also be multiplied by the sticky wild on the bottom reel regardless if its locked or not. Reel Split does not split the Grit Girl symbol, instead it doubles it’s payout multiplier. 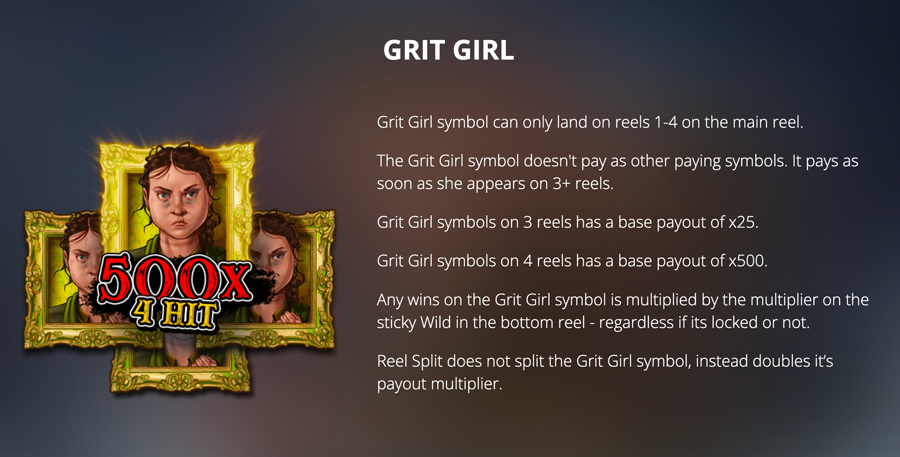 During the feature the active game area will be increased and the previously locked positions in the main game will be open for the duration of the feature. The sticky multiplier wild in the bottom right corner is still locked but comes into play for wins on Grit Girl.

Landing a fourth scatter symbol upgrades the bonus round into Dead Spins adding +2 spins and +1 spin for each extra split part of the scatter. 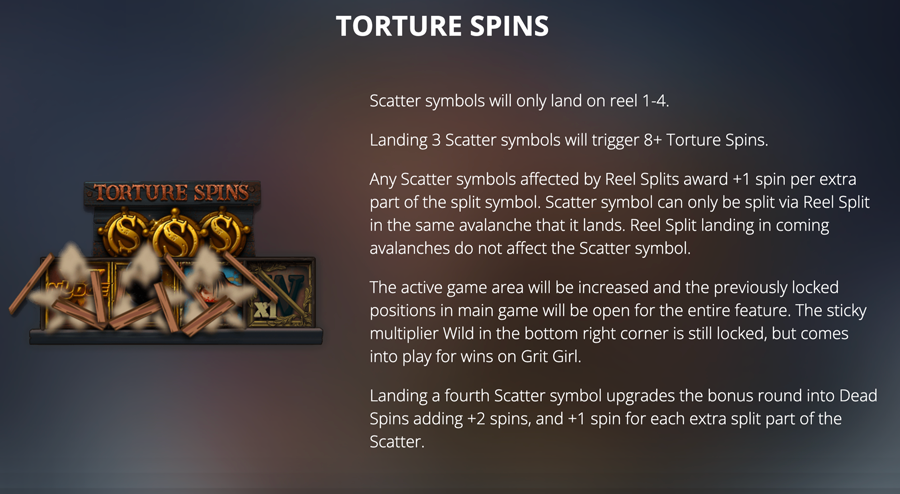 Now we look at the premium feature, Dead Spins. Landing 4 scatter symbols will trigger 10 or more Dead Spins. Any scatter symbol affected by Reel Splits award +1 spin per extra part of the split symbol. The active game area will be increased and all the previously locked positions in the main game will be open for the entire feature including the Sticky Wild with multiplier in the bottom right hand corner.

Now moving on to the premium symbols we have the Green bandit paying 0.85x stake for a full way, the Blue sheriff pays 0.95x, the Teal Mexican bandit pays 1.1x, the Purple lady of the night pays 1.35x and the Red ringleader pays 1.75x stake for a full way. Grit Girl as explained above pays 25x for 3 or 500x for 4, plus the bottom right multiplier on top! 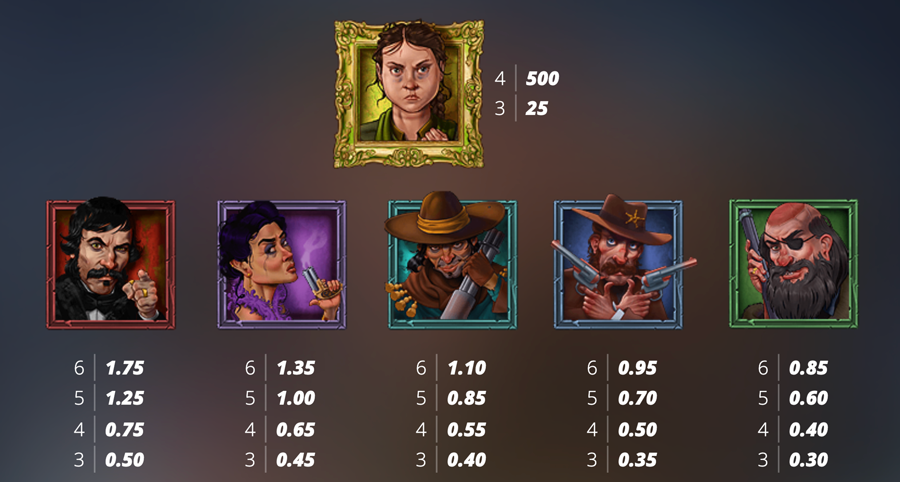 True Grit Redemption has an RTP of 96.11% and a maximum win of 20,220x stake which is not to be sniffed at, of course you can win 15 times this amount in the insane Tombstone RIP but on days where you’re not trying to win a small fortune then this might be the ticket. It’s still a 10/10 for volatility which Nolimit City attest too so set a budget and stick to it!

Would I play this again, yes I would, I find with most cowboy/bandit themed slots I feel relaxed playing them almost like I’m watching an old spaghetti western trying to fathom out what is actually going on and the appeal of only needing 4 Grit Girls for 500x stake plus a free multiplier, that’s enough to sell me the game!

If you got this far thanks for reading and if you fancy a go there’s a link below to a TGC trusted casino.

As always good luck and have a “Hog-Killin’ Time”