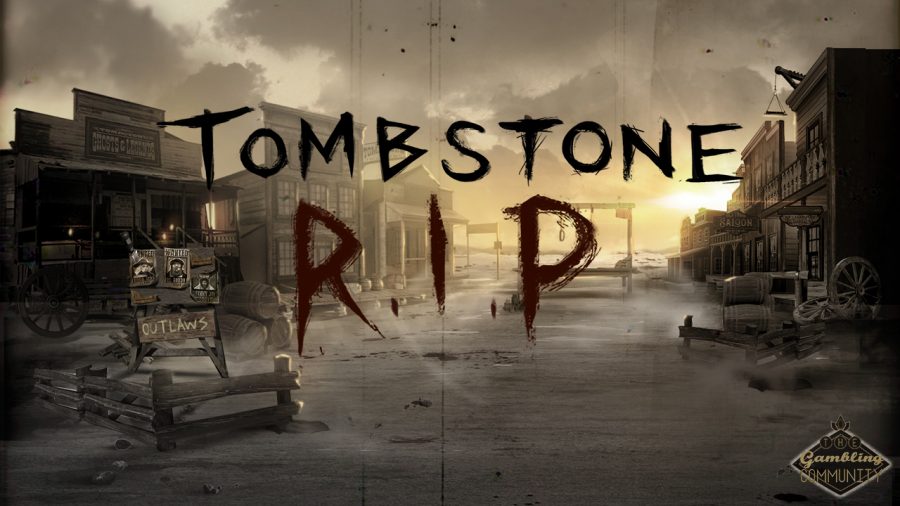 Someone needs to put these outlaws down because they are out of control. We’ll take justice into our own hands in Tombstone R.I.P. and hit ‘em where it hurts. The lowlifes and gunslingers have no idea what’s coming, but it’ll be a slow and agonizing death, that’s for certain. 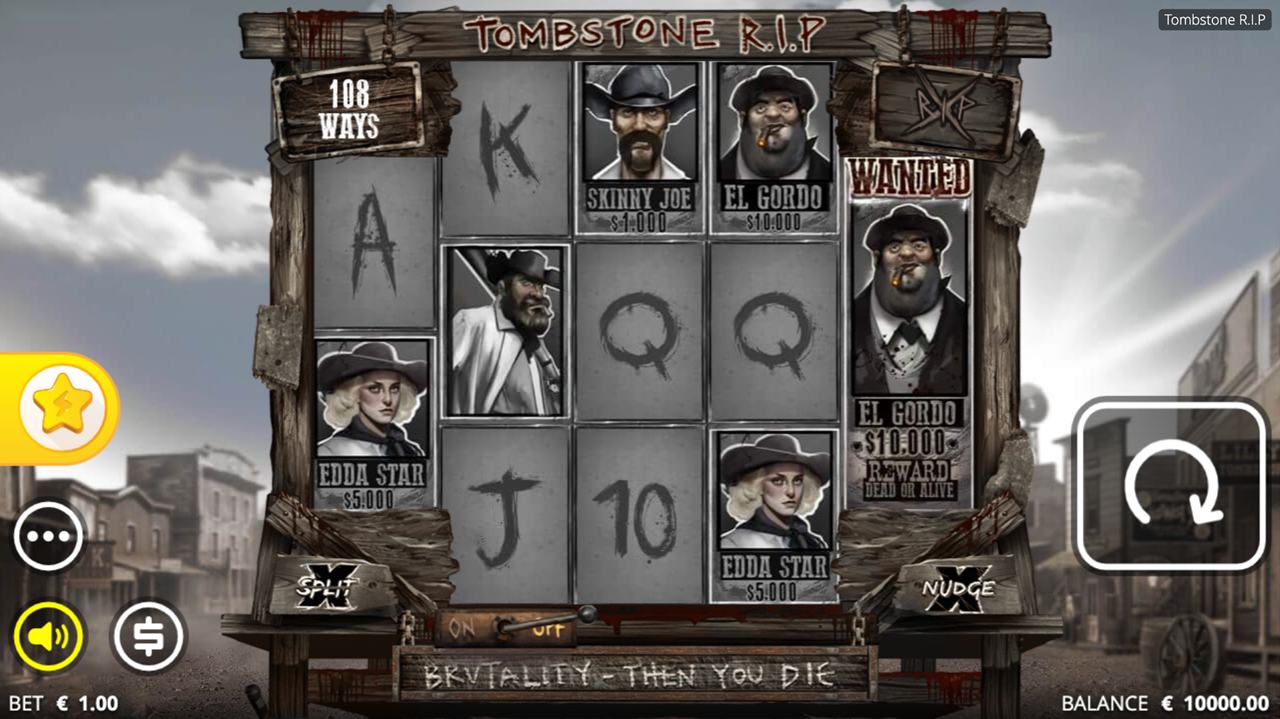 Tombstone R.I.P has 5 reels with a 2-3-3-3-1 setup but the fifth reel has special properties and limited symbols. All symbols on the fifth reel will always count as double and will always be a premium symbol as the low symbols have been removed. Wild, xSplit Wild and Boothill Scatter symbols are only present in the base game and Hang’em High Freespins, during the Boothill Freespins it only holds the 5 cowboy symbols and nothing else.

During the base game you can switch on an enhanced bet lever which increases the base bet by 10% and makes the base game far more brutal and high variance, however in exchange it keeps a scatter symbol on reel 2 for every spin, increases the chance of landing the Hang’em High Freespins and also increases the RTP by 0.20% from 96.08% to 96.28% so it’s probably a wise move if you intend to grind the game over many spins.

If only 2 scatters land they will turn into Reel Split Wilds and if just the Boothill scatter lands it will re-spin the final reel and land a cowboy symbol, this cowboy symbol becomes wild on all reels and awards a random symbol multiplier from x5 all the way to x999! 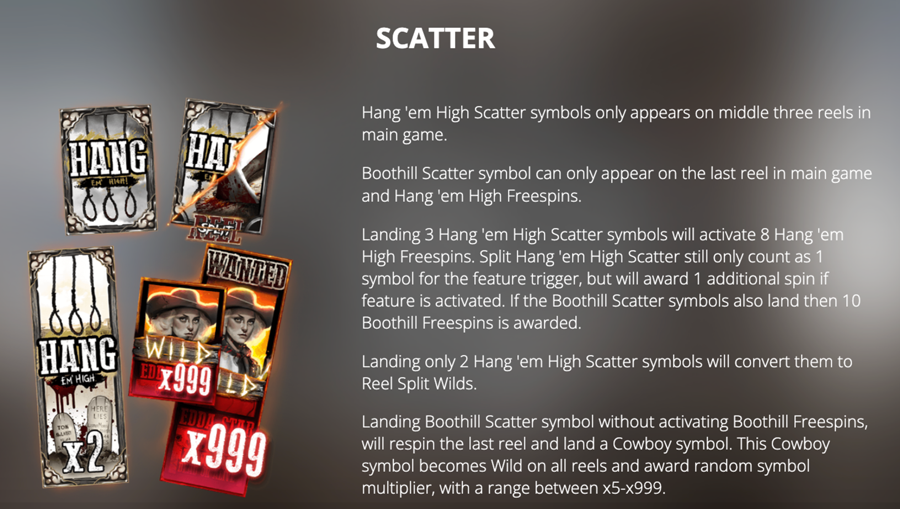 xNudge Wilds appear on the middle 3 reels only and will always nudge up or down to fill the reel if they land, each nudge increases the multiplier by 1x and if more than one reel have nudged wilds the multiplier will be added together before the win is awarded.

Regular Wild symbols can only land on reels 2,3,4 and 5 and the Reel Split Wilds can only land on the middle three reels. After landing it splits itself and the other symbols on that reel into half thus doubling the symbols on that reel! xSplit Wilds only appear on the last reel and count as 2 symbols high, when landing it will cut symbols to the left in 4 different paths as depicted below.

Another feature of this game is xRIP, basically any spin whether in the base game or the Free Spins round will trigger xRIP if the win is less than the cost of the spin, when this happens you lose the win and get nothing, this increases volatility and variance and means any win will always be more than your initial stake or nothing at all! 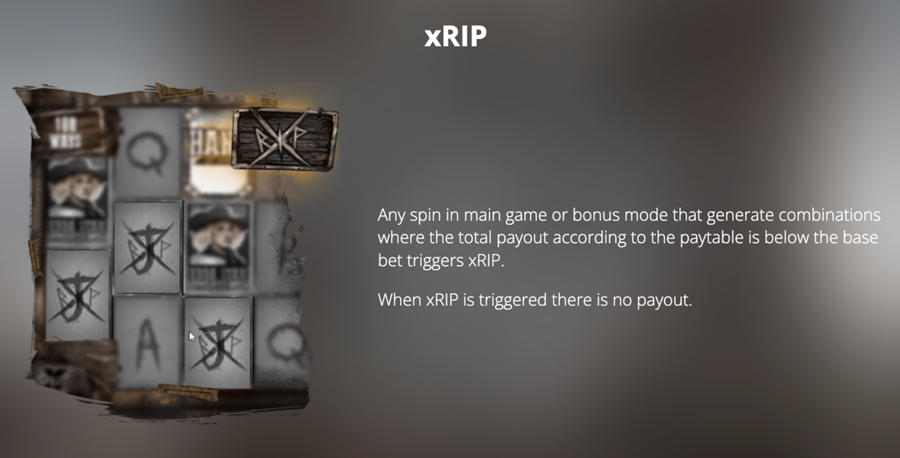 Boothill Freespins is awarded when you land 3 Hang’em High Scatters with a Boothill Scatter symbol on the final reel. The win multiplier will be increased by regular Wilds (x1), Reel Split Wilds (x2) and xNudge Wilds (x1-x3) and will remain throughout the feature.

For each spin that you land a Cowboy on the final reel, all symbols of that type will turn to Wild symbols . For each spin a random multiplier with a range from x5 to x999 will be drawn and apply to a random Cowboy symbol. The multiplier only affects the drawn Cowboy symbol and adds to the overall multiplier before payout is calculated. 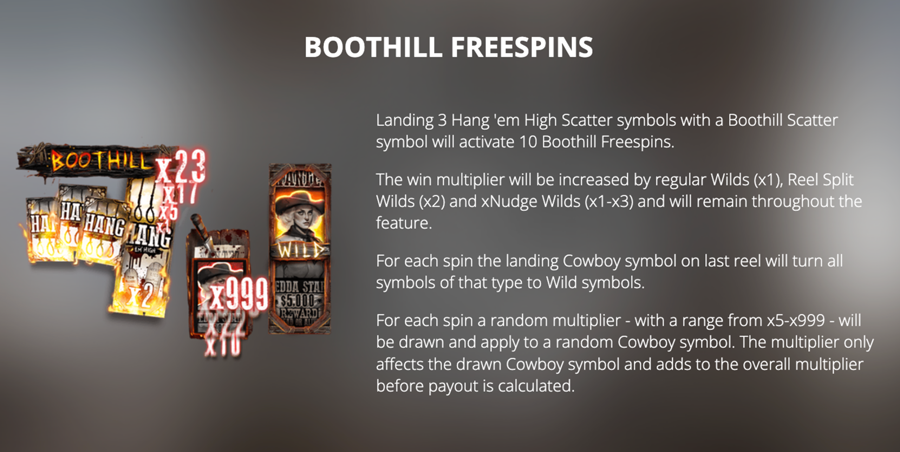 The paytable in Tombstone R.I.P is dynamic and changes with your stake so it’s nice and easy to interpret. Starting with the low paying symbols we have the 10’s paying 0.5x per way, J’s pay 0.6x, Q’s pay 0.7x, K’s pay 0.8x and A’s pay 0.9x. These are all useless unless stacked as they will simply activate the xRIP feature and no win will be awarded! 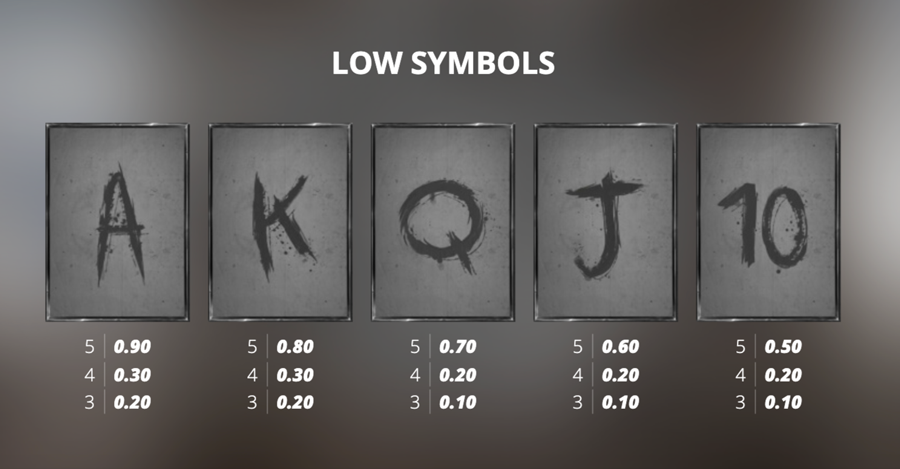 Now moving on to the premium symbols we have the bearded Cowboy paying exactly 1x per full way, El Gordo’s daughter is next and she pays 1.5x for a full way. Next we have Skinny Joe who is a wanted man and pays 2.5x, Edda Star also a wanted Cowgirl pays 3x and finally the son of a bitch El Gordo pays 4x for a full way but he was a good father to his daughter apparently, you’ll understand when you play! 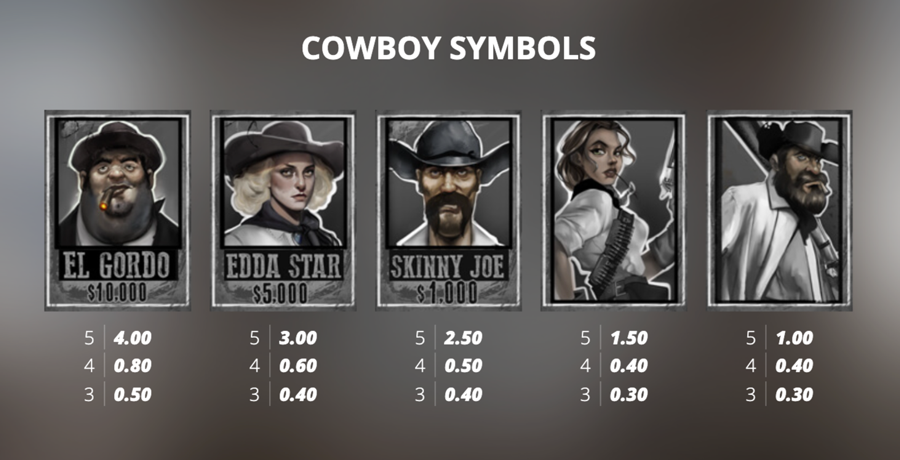 Would I play this again, 100% I would, I love the theme, the graphics are absolutely sublime and the attention to detail is next level along with a professional soundtrack as a cherry on top! As always thanks for reading and if you fancy a go we have a link below to a TGC approved casino with the game locked and ready to go.

1 last tip, think before you answer the question at the opening screen, if you get it wrong the game closes! I’ll give you 1 answer, you want to die in your boots not out of them!

Good luck and remember, never squat with your spurs on!