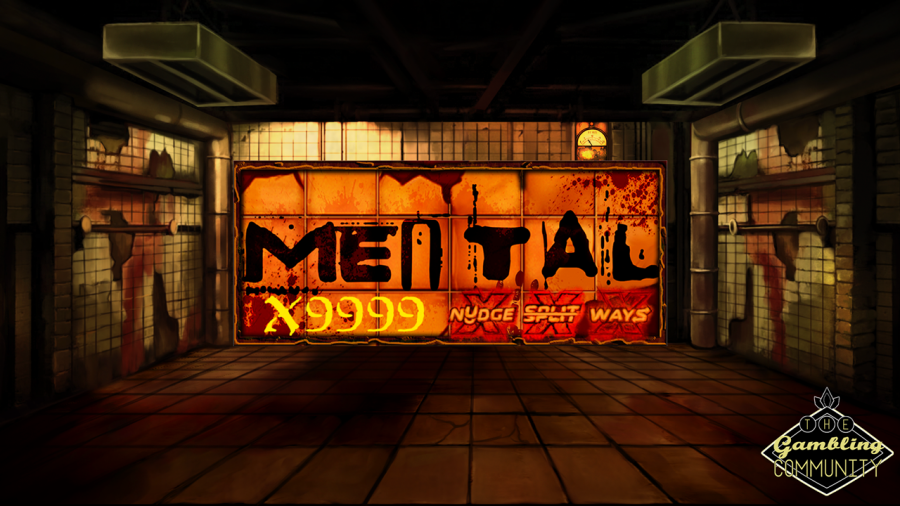 It is mental, truly mental. Located in a mental asylum, in a part of the country where no one except nurses and doctors really dare to visit…. xWays, xNudge, Dead Patients – the madness never really ends with this sepia toned masterpiece. Join Patients 1 to 5 in this sinister asylum in search of an epiphany and a clear mind say Nolimit City… 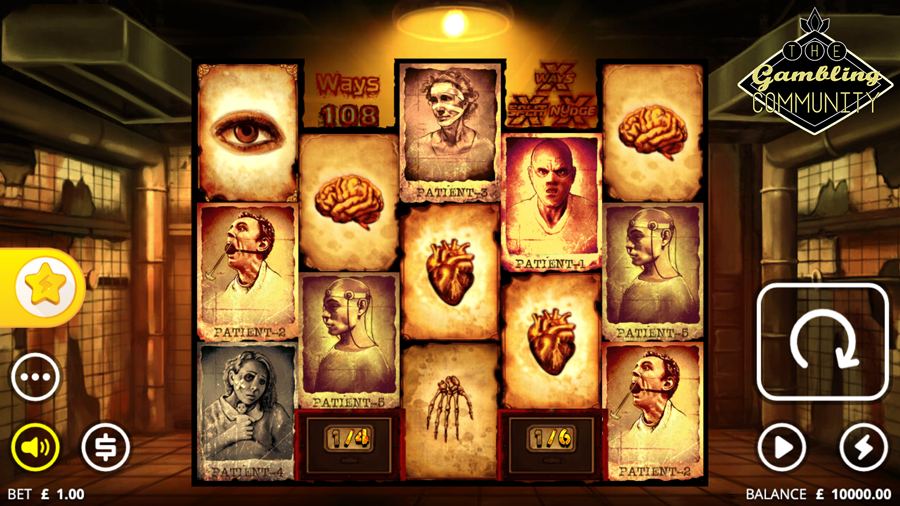 Mental is the latest installment from the team at Nolimit City; It’s based on a mental asylum from many years ago, back when full frontal lobotomies and patients being used as test subjects was the norm and whilst the game is totally fictional it touches a subject I’m not fully comfortable with. I can’t help letting my mind wander and thinking of the poor souls that actually endured these horrors, with that said it’s also refreshing to see a game made with a serious adult subject rather than cartoons from the more jovial genres.

Mental has a 5 reel setup with 108 win ways and Nolimit City is taking it a bit further with the sinister theme and bulking it up with a load of features – The two newest being the Enhancer reels and potent Fire Frames as seen above. 1-13 positions on the reels are randomly selected to catch fire each spin, any symbol that lands in a fire frame will split into 2 parts.

Whenever you land two Dead Patient symbols you’ve got the chance to win a massive random multiplier – ranging from x5 to x9999 on a patient symbol. I personally saw the x50 on a three of a kind of Patient 4 in a test feature and it paid two or three hundred times stake so this is the feature you want to see pop off when you play!

The Enhancer Cells boost the chance of wins whenever 4 or 6 Fire Frames appear on the respective reels. Each Enhancer Cell can reveal either a Dead Patient or one of the main 5 Patients symbols. 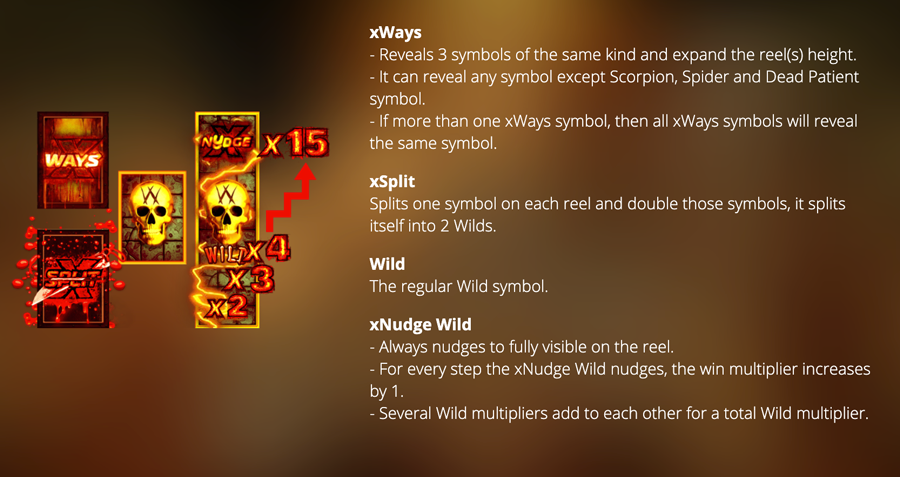 As in other Nolimit City games you also have xWays, xSplit and xNudge along with good old fashioned regular Wilds! Couple these three modifiers with the three we just looked at and suddenly any one spin in the feature can have all six modifiers going off and it is a huge amount to take in as a player. I’m sure after a while it will become too intricate for some players leaving the remaining players who love the complexity.

To make it even more complicated there’s also a Mental Transform feature if you land the Spider symbol on reel 2 or reel 4, the Spider symbols will then transform into either xWays, xSplit, Wild, Dead Patient or Patient symbols.

Mental has 3 versions of the free spin feature, the first is Autopsy Free Spins which is awarded for landing three of the Scorpion symbols, if a Scorpion lands in a Fire Frame it awards 1 extra spin. Scorpion symbols exist only on Reels 1, 3 and 5 in the base game.

During the feature each spin will start with up to 5 Fire Frames which stick for the duration of the feature, this feature can also be upgraded to Lobotomy Free Spins which we will take a look at next.

In addition to the features described in the first feature we now have those plus a couple more, the Spider symbol is now also sticky and triggers the Mental Transform feature each spin and the Dead Multiplier is now active in which Patients that land are counted and assigned the highest multiplier, that is then transferred to the relevant Patient symbol should it land, this is where the immense wins will come from. This feature may also be upgraded to Mental Free Spins which we will look at next. 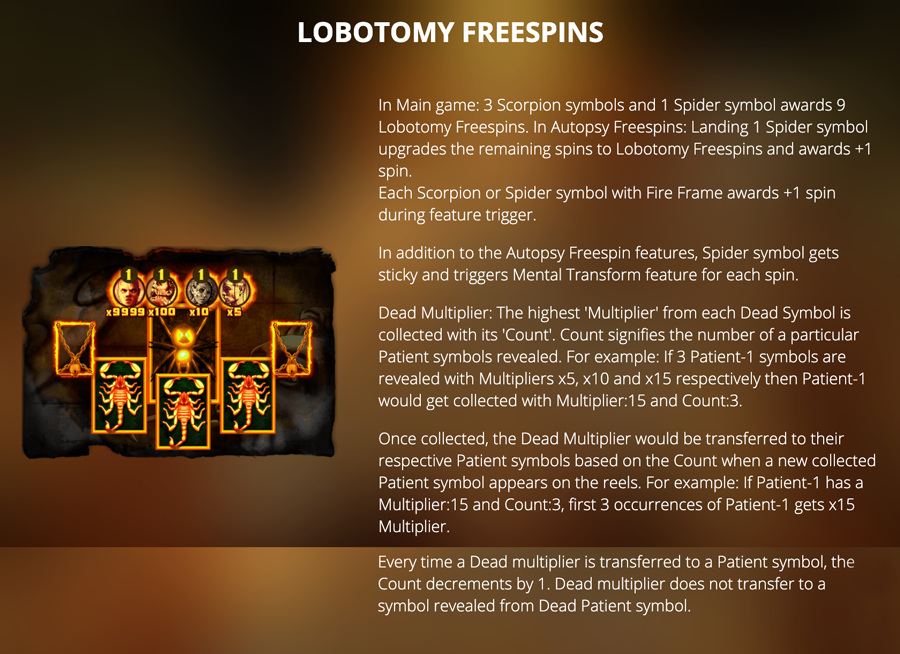 Mental Free Spins is where things do actually go Mental! To get this feature you need 3 Scorpions symbols and 2 Spider symbols where you will be awarded with 10 Free Spins with insane potential.

In addition to all of the features from the first two features we looked at we now have both sticky Spider symbols which activates Mental Transform twice each spin and on top of that the multiplier for the Dead Patients now doesn’t reset when used, it just continues to grow with each new Dead Patient revealed on the reels! 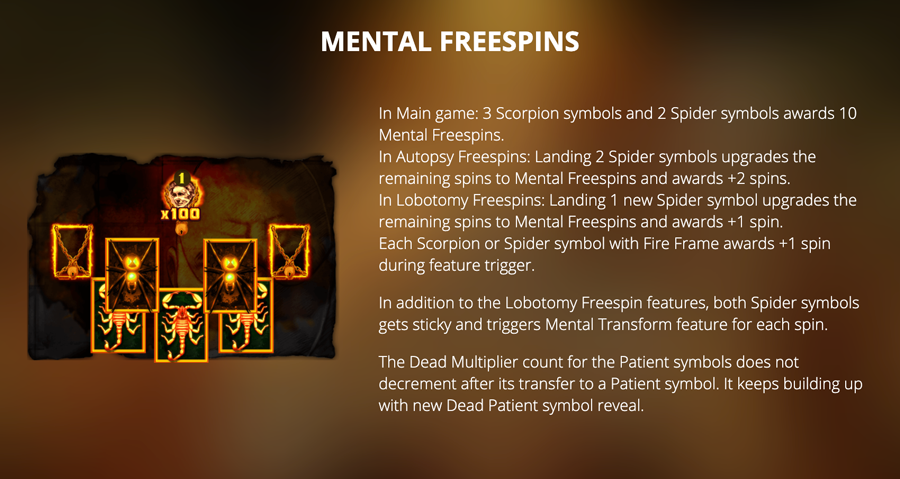 The paytable in Mental is dynamic and adjusts with your stake and the example below is set to £1 for simplicity. Starting with the lower paying organ symbols we have the Skeleton Hand paying a straight 1x stake for a full way, the Lungs pay 1.05x stake, the Heart 1.10x, the Brain 1.15x and the Eye 1.25x.

The Premium symbols or Patient symbols as they are known pay 1.5x for a full way of Patient 5, Patient 4 pays 2x, Patient 3 pays 2.5x, Patient 2 pays 3.74x and finally we have Patient 1 who pays 5x for a full way. Get any of these with a x9999 multiplier and it’s going to go Mental and hit the capped maximum win of 66,666x stake pretty easily and if Nolimit Cities previous games are anything to go buy those wins will probably come on Day 1 if not Week 1!

Mental has an RTP of 96.08% and the volatility is rated as Extreme so expect massive variance. The sepia graphics and the scary background music make you think you’re watching some sort of SAW movie and if that’s your thing you’re going to love Mental. From a mechanics point of view it’s absolutely jaw dropping, the way 7 different modifiers can interact so perfectly is a true testament to Nolimit Cities innovation and for that I rate them highly.

Overall its very original and after hours of test play it’s not actually as morbid as I first imagined. If you fancy a go yourself there’s a link below to a TGC trusted casino that will have the game on launch which is the 31st August, as always thanks for reading and keep it responsible if you play