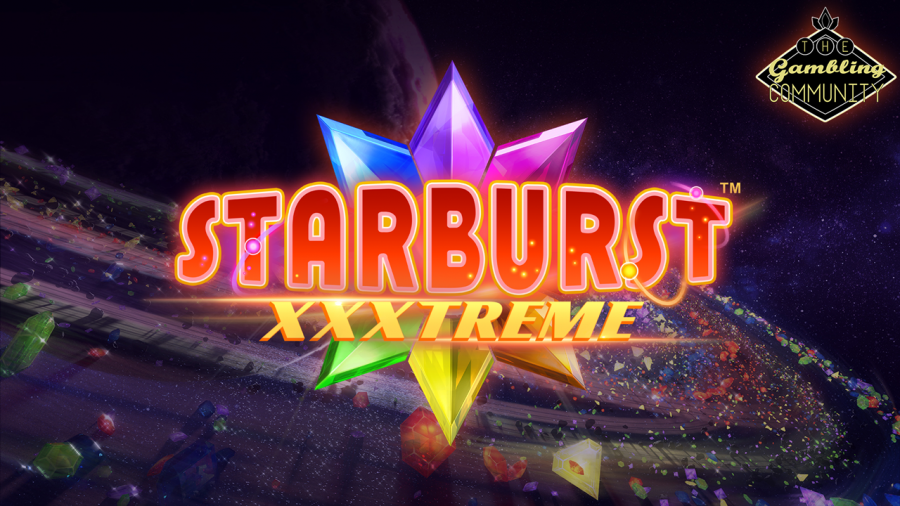 There’s a new star in the galaxy and it’s bright! NetEnt studios proudly presents Starburst XXXtreme, a new title based on the legendary game. This space-faring slot holds nothing back. Fans of the original get to experience the classic world of Starburst but with cranked up volatility and new features and functionality – not to mention an overall game experience that’s so intense, it’s XXXtreme! Buckle in and hold on tight for the ride of a lifetime! 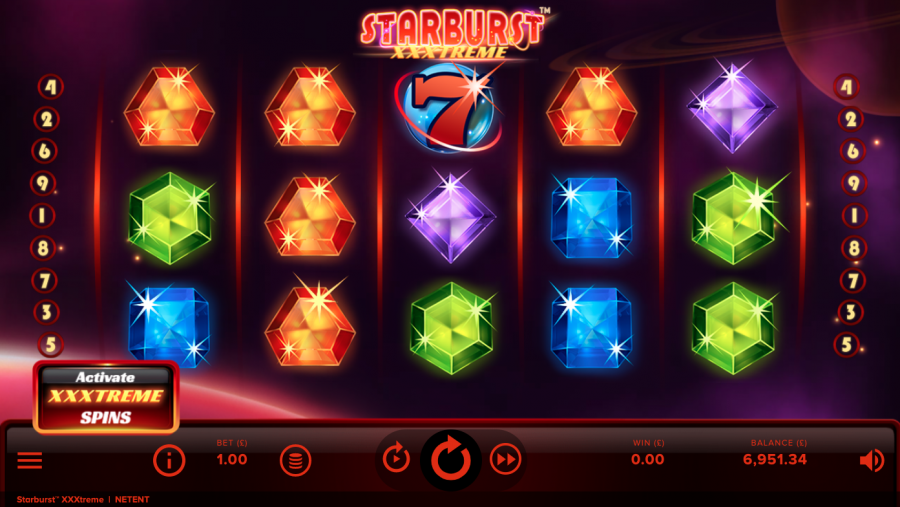 Starburst XXXtreme is a 5 reel, 3 row slot with 10 fixed paylines and featuring the Starburst Expanding Wild symbols from the original classic and two new features, namely the random wilds feature and the XXXtreme Spins where you can spin 95x stake in one spin and win upto 200,000x stake!

During the base game the idea is to land at least one expanding Starburst Wild on the middle three reels. When a Wild lands it expands to fill the reel and awards any wins before re-spinning for free and awarding any additional wins. Should another Wild land after a re-spin you get another re-spin and so on, the ideal scenario would be one Wild at a time, three spins in a row, which did used to happen occasionally on the original so can’t be ruled out on this sequel.

Starburst XXXtreme also has a brand new Random Wild feature that can be activated after any spin or even any re-spin. When this feature activates you will get between one and three Starburst Wilds land like a meteor from off the screen, they land one at a time for added suspense like a Wild Desire in Immortal Romance, during my testing this feature didn’t activate so I don’t know how common it is at present and Netent keep their cards close to there chest! 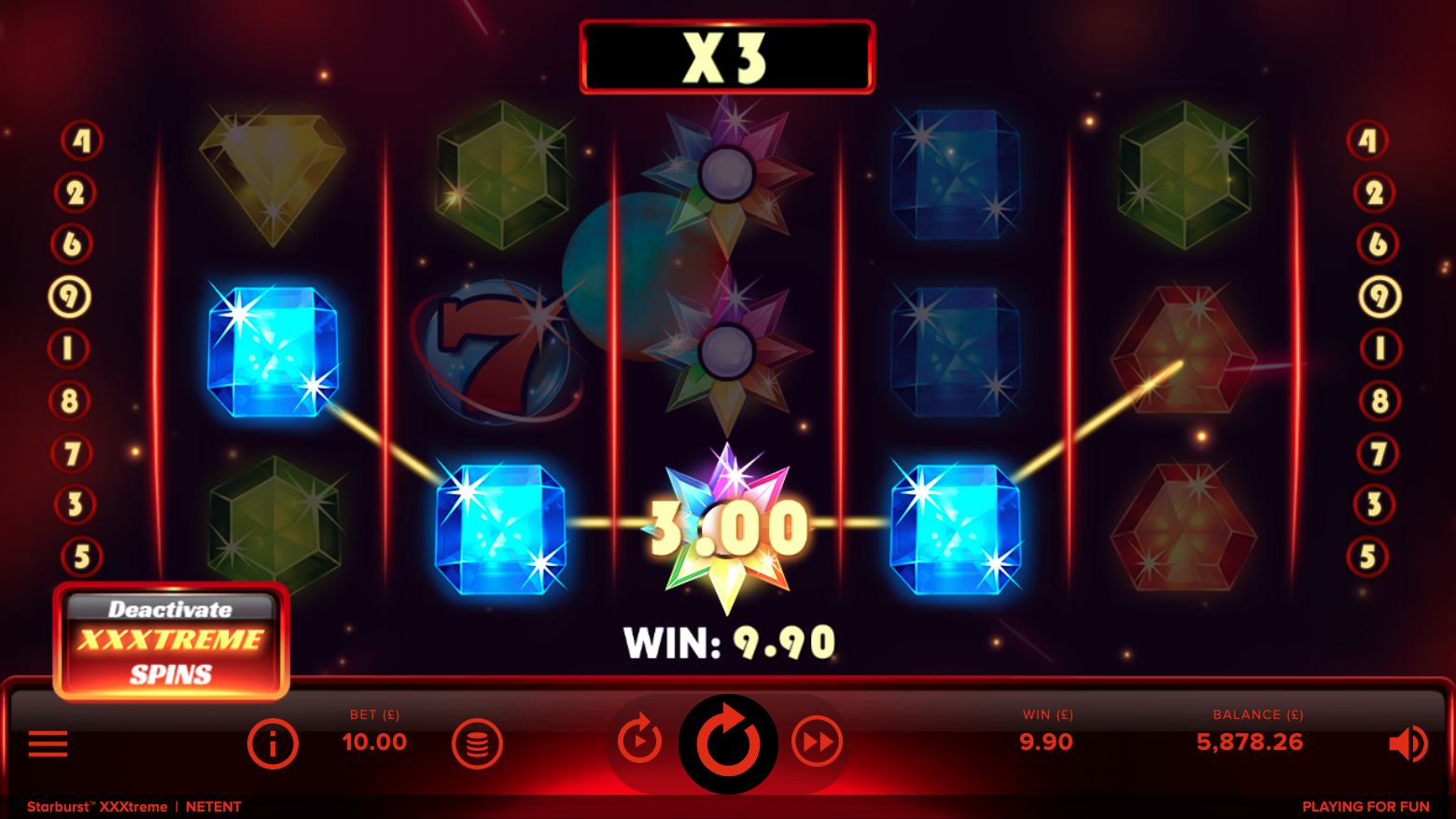 You can see above where I purchased the single Wild for 10x stake and basically got the whole amount back, this would turn out to be one of the more successful XXXtreme spins! Next I decided to try the 95x purchase as you can see below, it returned nothing! 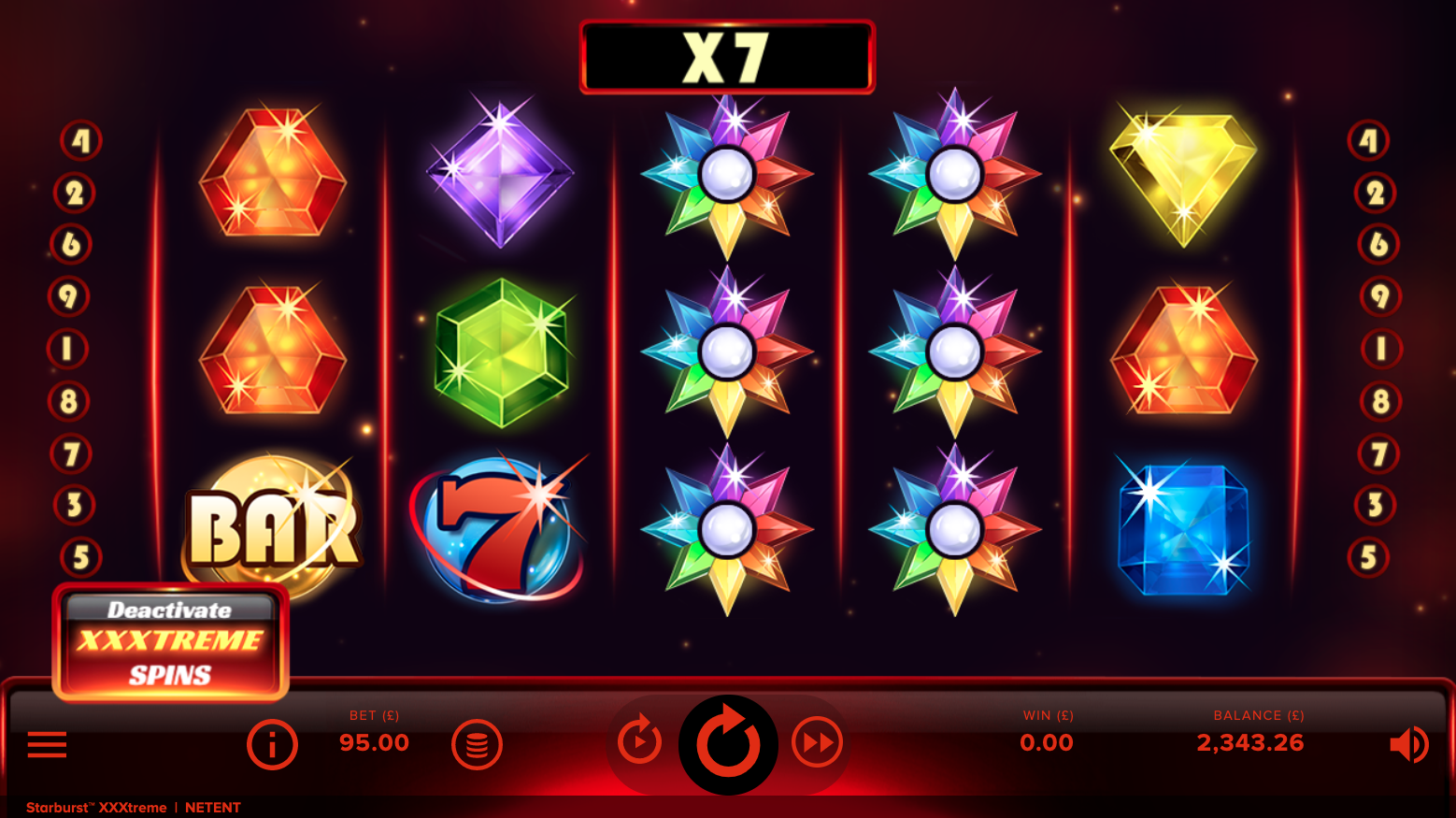 I persevered and my best result is shown below for the 95x spin, I was lucky enough to get an extra Wild and also an 11x multiplier but it still wasn’t enough to win more than half the stake back! 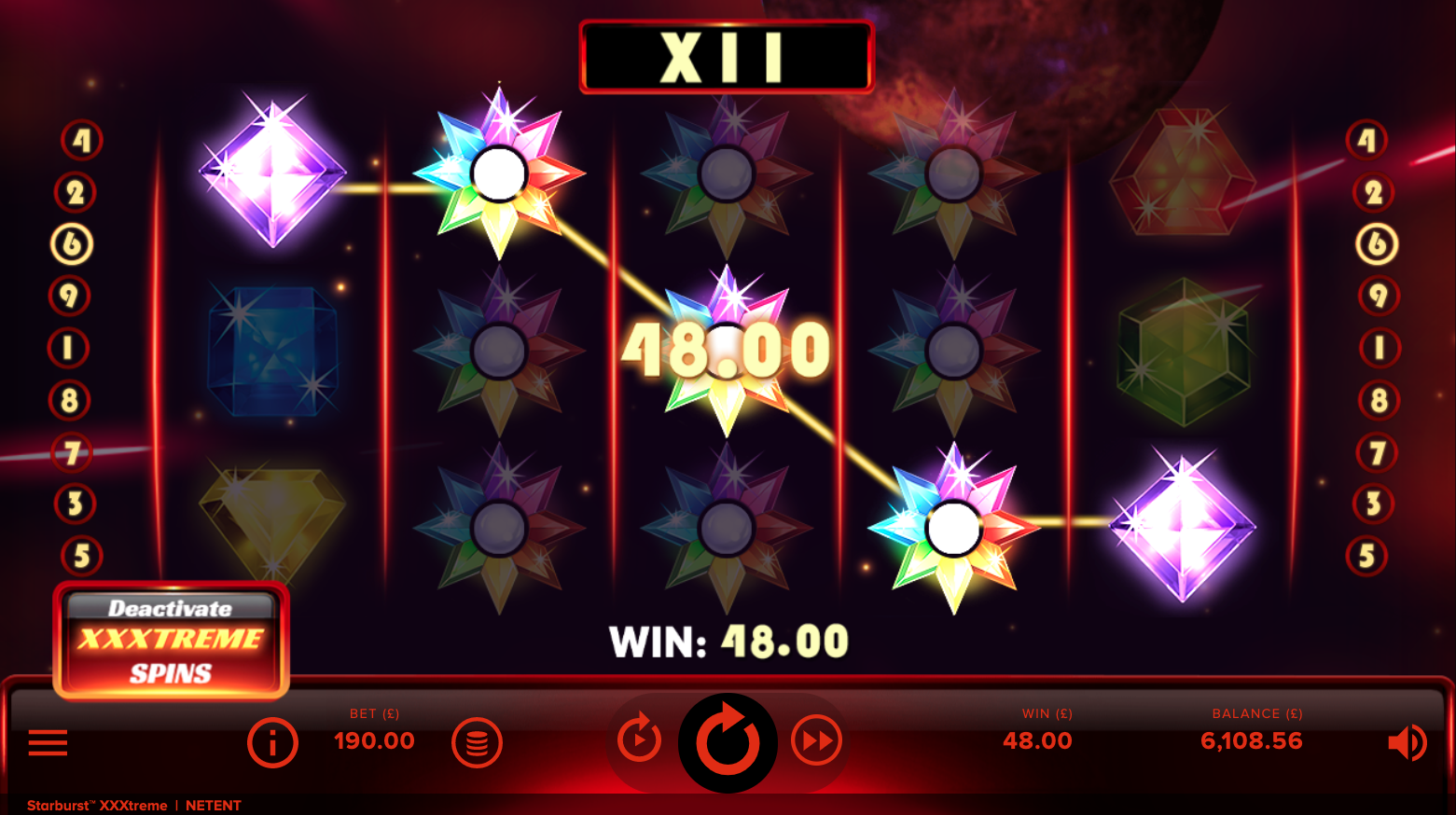 So how do you win on Starburst XXXtreme I hear you ask, each time a wild reel lands it awards a multiplier between 2x, 3x, 5x, 10x, 25x, 50x, 100x or 150x. These are then added together above the reels and multiply the total win, the maximum multiplier is 450x and it’s this mechanic that enables the humongous wins I’m yet to see. For example the losing screenshot above would of been nearly 2000x with just the max multiplier and that’s just for some purple gems, imagine the bars or 7’s!

The paytable in Starburst XXXtreme is dynamic and changes with the players stake. Starting with the lower paying symbols we have the Purple and Blue gems paying 3x for a full line, the Orange gem pays 4x and the Green gem pays 5x while the Yellow gem pays 6x for a full line. 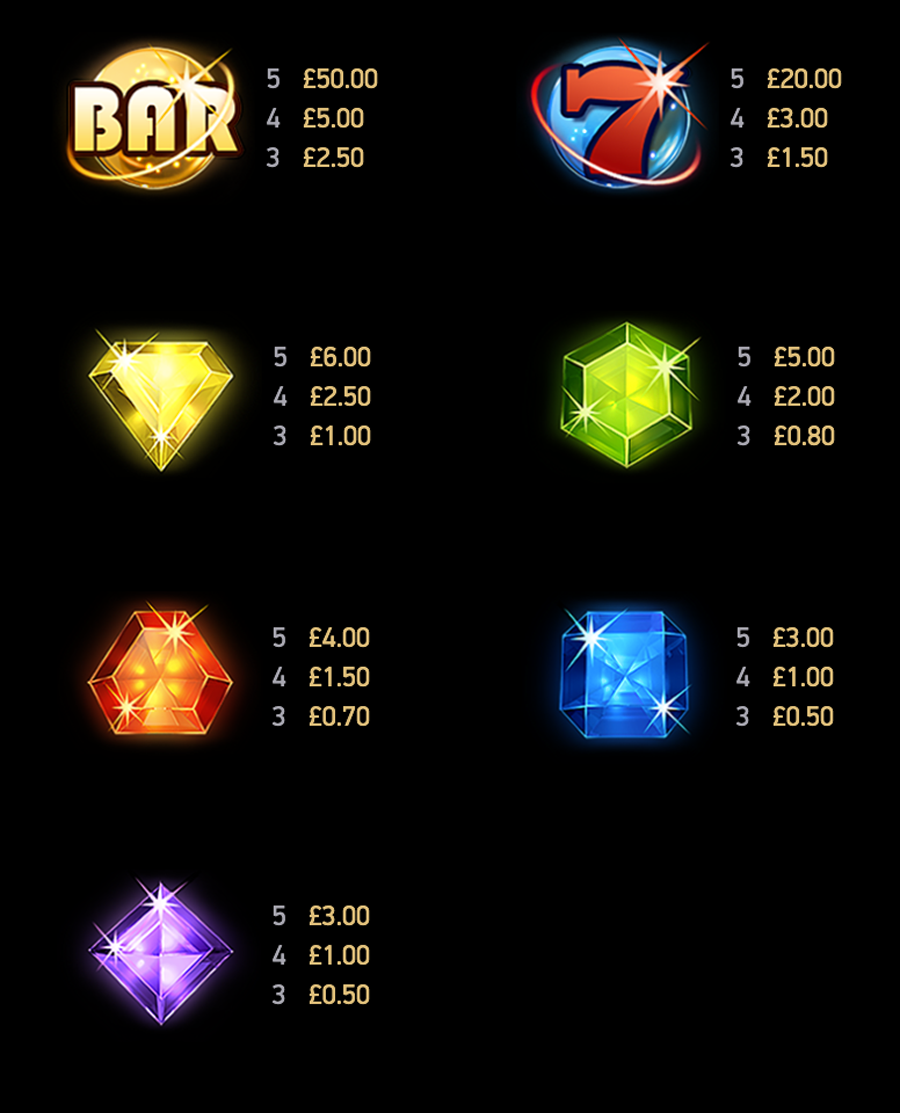 Starburst XXXtreme only has 2 premium symbols just like the original and they haven’t changed, the 7 symbol pays substantially better awarding a 20x win for 5 of a kind and the Bar pays a respectable 50x for a full line. Get either of these two with a multiplier and some wilds and it’s party time!

Starburst XXXtreme has an RTP of 96.26% on the regular spins and a slightly higher RTP of 96.45% for the XXXtreme Spins. The volatility is of course Extreme with a maximum capped win of 200,000x stake! In my opinion this variance maybe a tad too high when coupled with a game like Starburst and it’s unique mechanics, the game produced so many dead XXXtreme spins that the balance was destroyed and that stopped any enjoyment before it got started.

I think this will become a game you either play on XXXtreme spins with a big balance or grind away the base game to land the Wilds naturally like the original, I can’t say the two modes go together, it’s one or the other for me as they are too conflicting when mixed.

Either way it’s nice to see Netent are trying to keep up with the competition, at least in win potential anyway, whether this potential should of been mixed with an old game that’s ingrained to most players as a starting game with no potential to win or lose a lot remains to be seen for now.

As always thanks for reading and if you fancy a go with no funny business there’s a link below to a TGC approved casino, good luck and keep it responsible!