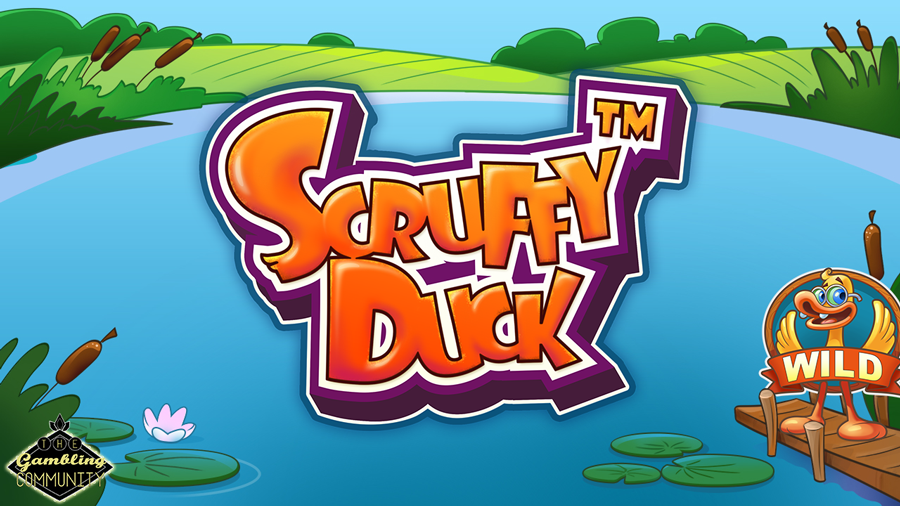 In this review we’re going to look at medium variance game from Netent, the one and only Scruffy Duck, this games a personal favourite of mine and although it doesn’t have the potential of the super high variance games we all love it does have lots of interesting features and one of the best soundtracks to date!

Scruffy duck has a 5 reel by 3 row setup and plays on a fixed 25 lines, during the base game the main feature is the expanding ugly duckling wild which can land on any of the 5 reels and if you’re lucky enough all of them in the same spin giving the opportunity for a full screen of wilds, what’s not to like about that!

The main feature is opened by landing 3 of the freespin scatter’s on the last 3 reels, it might seem harder to land as there not available on the first 2 reels but they are normally plentiful and the bonus average is at least once every 100 spins in my experience.

Once you get the main feature you are taken to a screen with 5 lily pad’s to choose from, each one hides a different version of the feature, theres a 3x multiplier with 15 freespin’s, a symbol removal feature where only premiums are left on the reel’s and you get 12 freespin’s, the colossal wild spins give you a huge 3×3 wild that can land on the middle 3 reel’s along with 10 freespin’s. 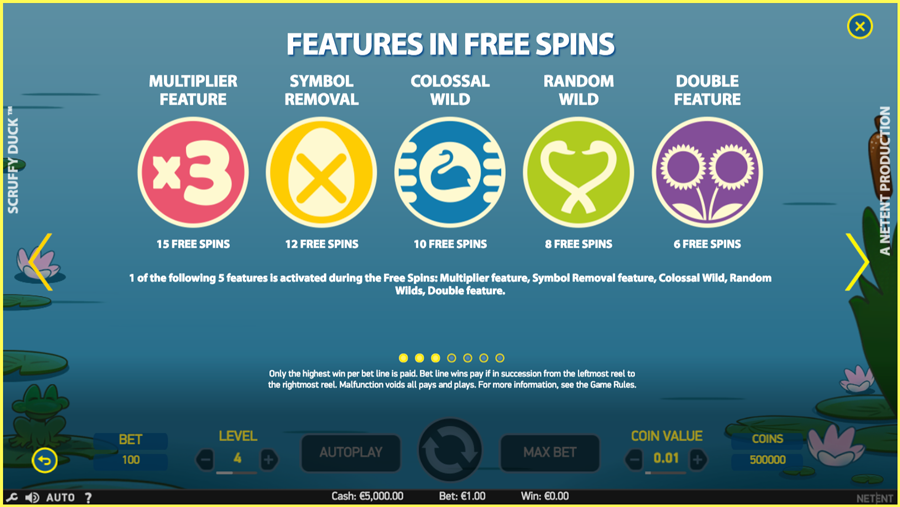 The random wild feature is 8 spins and a bunch of randomly placed wilds that appear at the end of each spin and finally the best of the lot which is the double feature where you get 2 of the previously mentioned and only 6 spins as it has the most potential. During any of the two features with the 3x multiplier you can win up to 1200x your total stake in just one spin which doesn’t seem a lot compared to the new super high variance games but in reality most of us would love any win over a 1000x, I know I do! 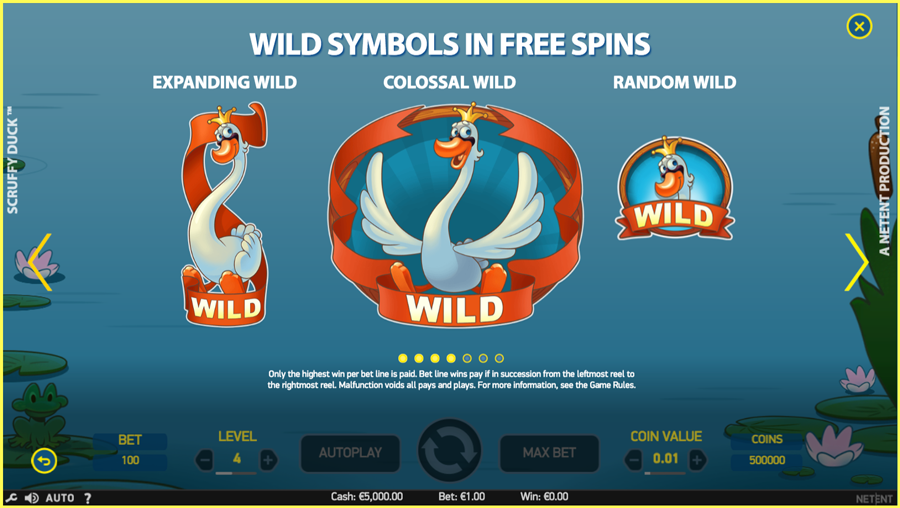 Scruffy Duck’s paytable is not dynamic and shows you the amount of coins win per level which can be a bit confusing for some unless you’re playing on the lowest stake so let me walk you through each symbol. The J’s pay 1.6x for a full line, the Q’s pay 2x, the K’s pay 2.4x and the A’s pay 2.8x, these are basically just to keep you ticking over while you play for the bigger wins below! 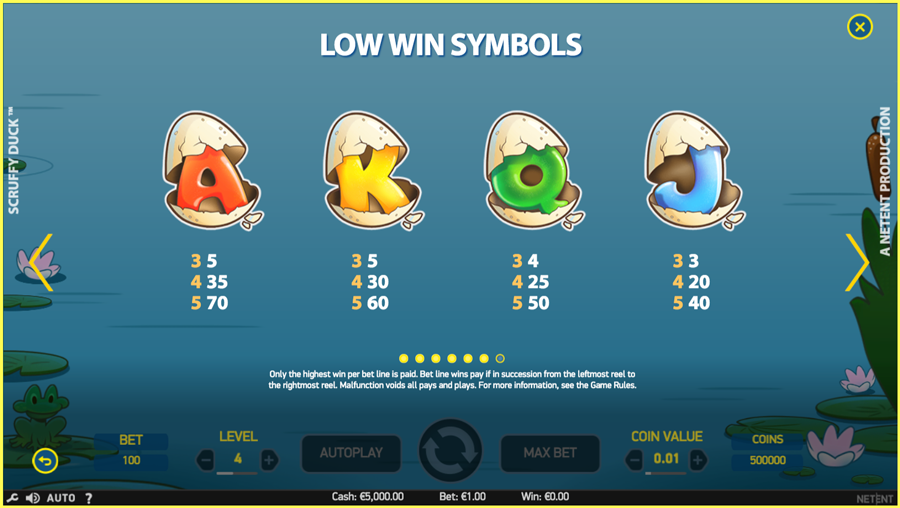 The premium symbols in Scruffy Duck pay a lot better as all of these symbols are stacked on every reel so full screens of these are not uncommon, the little blue duck pays 6x for a 5 of a kind, the main man himself the green scruffy duck pays 8x, the mother duck in the orange pays 10x and the top symbol is the classy business man duck that pays 16x, get a full screen of him with a 3x multiplier and you have won the maximum pay of 1200x, get him in the base game and its still a respectable 400x, this is also the same for a full screen of the expanding wilds. 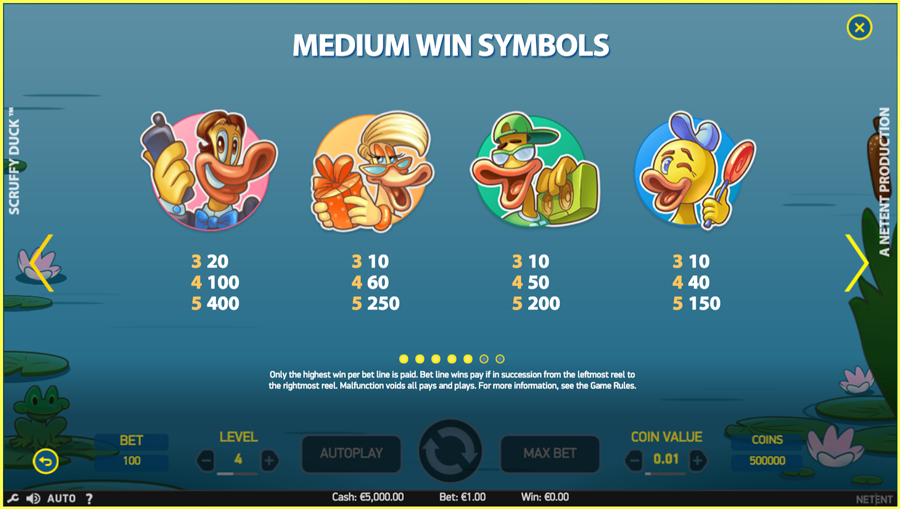 Scruffy Duck has an RTP of 96.38% and its safely in the medium variance category, the graphics are great and like I mentioned before the feature has the best soundtrack to date with it’s wacky and quacky DJ style, I challenge you to not like it! This is one of my go to games when Im playing for fun rather than the chance of a life changing win, it’s also a game I have wagered many bonuses on before and done very well with, if you haven’t played this before I suggest you do, you’ll love it! Thanks for reading and there’s a link below for a TGC trusted casino that has the quacky game ready to play, good luck!