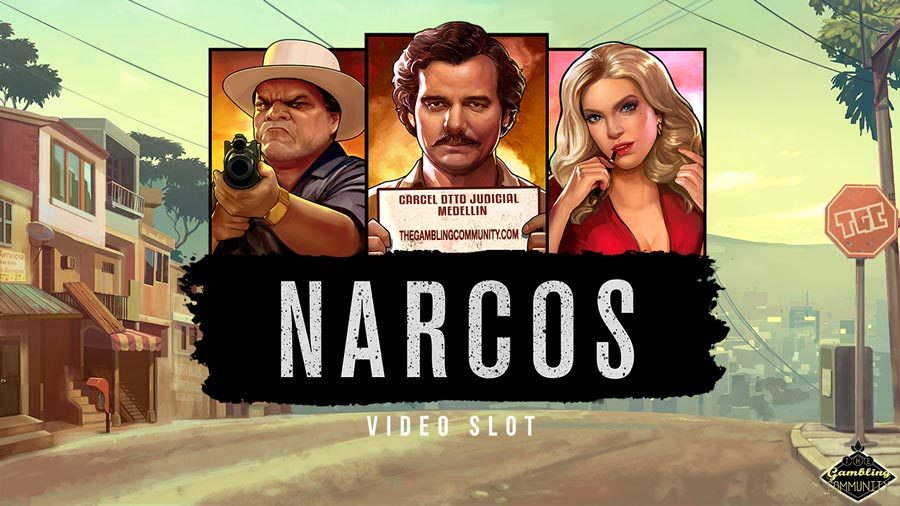 Netent are really spoiling us this month, first we get Dead or Alive 2 and now we get a slot based on the Netflix series Narcos, the series was based in the 1980’s around the drug kingpin Pablo Escobar and his rise to the top of the underworld all whilst being pursued by the government and law enforcement which eventually ended in his fatal demise. The series was a great watch and hopefully Netent have done it justice with there take on the theme… listo, vamonos! (Ready, let’s go!)

Narcos has a 5 reel by 3 row setup and you play with 243 ways to win, there are no lines to worry about just match a symbol on at least the first 3 reels and you have a win. The game has quite a lot of small features that all roll into one and make the game, to start with we have the Walking Wild feature which we are all familiar with from games like JATB however this is slightly different, every time a wild lands on a spin you have a chance of it catching fire which then indicates it will walk to the left on the next spin, you also have to pay for the next spin which is unique as most walking wild slots include the extra spins with the trigger spin. Moving on….

Next in Narcos we have the Drive-By feature which can activate after any spin during the base game, once the reels come to a stop the car comes screaming onto the screen in slow motion and the gangsters fire bullets at the reels, the symbols that are hit then spin and have the chance to land on wild or back to there original state, this feature seemed to activate frequently during my testing but never ended in a big win it was usually a couple of wilds to give me a 4 of a kind premium win, either way it’s nicely put together and really fits the theme.

The Locked Up feature activates if you get at least 3 of the Pablo Escobar symbols on the same row, once you do this they then move together and assign a coin value to each symbol, the background changes and you are now in a high security prison, the reels only have gold brief cases and Pablo symbols, you have 3 spins to land more and if you do they then cluster together and are assigned values, the spins also reset back to 3 similar to Donuts. I had this feature only three times in over a 1000 spins and it paid less than 10x two times and only 47x with multiple re-triggers and the golden brief case so it left me rather underwhelmed!

The Golden Locked Up Symbol is a feature that can happen during the Locked Up Feature and I managed to get it once, the golden brief case landed in the middle and upped the values on the symbols I had acquired, the total win was 47x so a bit better than the 10x I had prior but still nothing to write home about when apparently the largest win possible from this feature is 271x your total stake.

The Free Spins round is the main feature in Narcos and you have to land 3 scatters to activate it, the scatters are only available on reels 1, 3 and 5 and once unlocked you’re taken to a new background outside a disco where a shootout occurs after every spin, this is basically the same as the Drive-By feature but with more bullets, you can also have any of the wilds stick and walk after each spin so it’s where the game has it’s most potential for a mega win.

The Free Spins have no re-trigger per se but as long as there is a walking wild on the screen the spins continue, this means the feature can carry on for a very long time and the maximum win is reported as 1506x your stake which is no where near what I imagined considering how hard it was to get the feature in the first place! It’s looking like Netent may have dropped the ball on this one which is a shame as the production quality is brilliant. 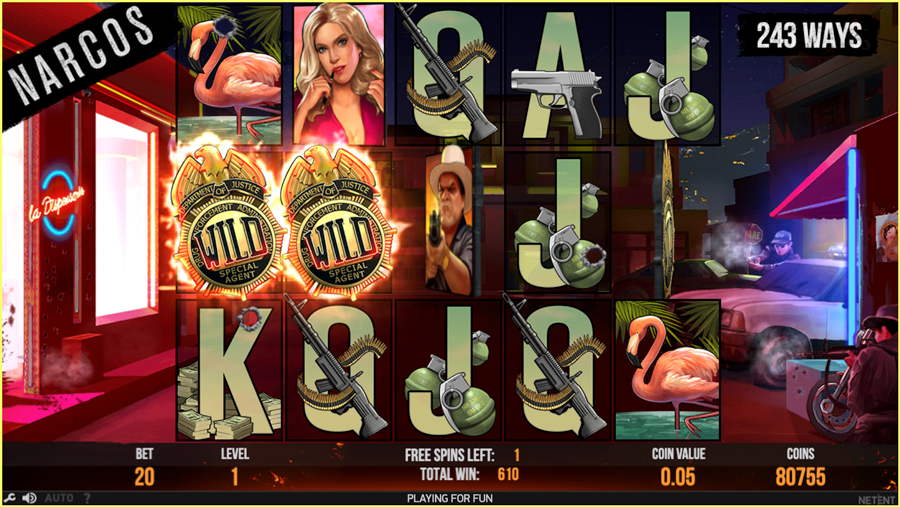 The paytable in Narcos is typical Netent style with there wins listed as amounts of coins per level just to confuse you! In straight forward terms and starting with the lowest paying we have the J’s and Q’s paying 2x your stake for a full way and the K’s and A’s pay 3x for the same.

The medium value symbols pay 6x for a full way.

The high value symbols have two tiers, the Narcos at the bottom pay 12.5x for a full way and the police officers pay 15x, the wild symbol pays 15x too so theres no premium which is a shame and possibly why the maximum win on this game is so disappointingly low.

Narcos has an RTP of 96.23% and Netent list it as medium to high volatility, I would agree with the game mechanics being high variance based just on the scarcity of the main feature, however the pays are firmly in the lower end of medium variance and unfortunately those two don’t mix for me, it just gives the player less playtime for there money and tends to leave a bad taste in ones mouth. I know that Narcos are inherently greedy but there was no need for Netent to take the theme this far, instead of coming out as drug kingpins they have left themselves looking no bigger than a measly street dealer, Pablo would be furious!

In all seriousness the graphics and music are fantastic and theres even a little hidden easter egg in the base game for you to find out, its just a shame the potential isn’t there for a mega win but it could still prove to be a great game for wagering as the wins seemed to be very frequent but thats something only time will tell, it’s a slot I will play from time to time just for the music and theme, as always thanks for reading and if you fancy a go theres a link to a TGC trusted casino below, bona furtuna! (good luck!)