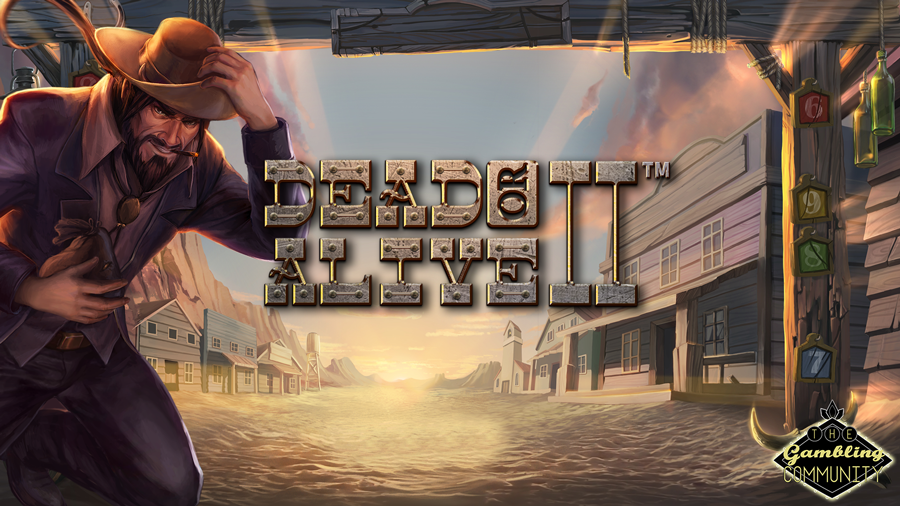 Overview Of Dead Or Alive 2

Netent have finally delivered, at least I hope they have, it’s time for Dead Or Alive 2, the sequel to one of the most played online slot’s in the world. I remember getting my first ever wild line on the original and being absolutely astonished at the stake to prize value, still to this day my biggest ever win was on Dead Or Alive and my second biggest win ever was too, both not far off 3000x stake! So let’s saddle up with the Apache, Della Rose, Jesse James, Belle Star and good old Billy and jump into the revamped saloon and see what’s in store for us this time round, yee-haw! 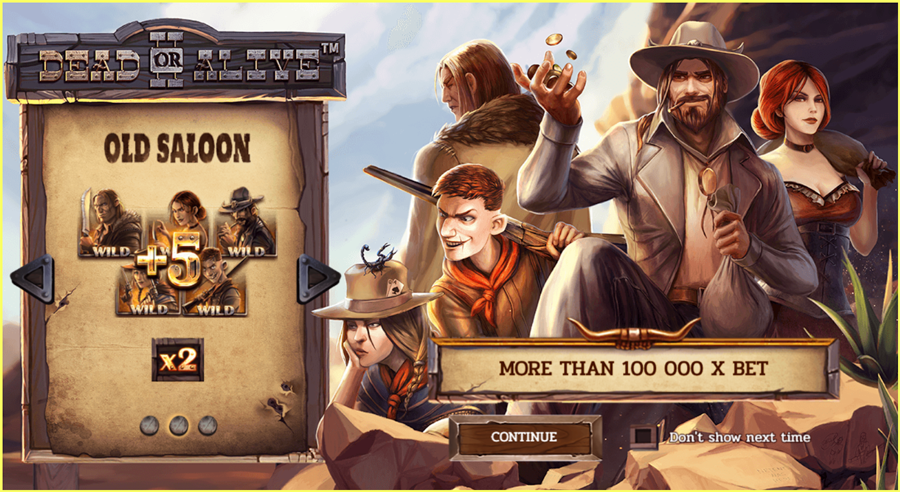 Dead Or Alive 2 has a 5 reel by 3 row setup and you play on 9 lines exactly the same as the original. This time round the slot has three features rather than just one and you need to land 3 or more scatters to enter the feature selection page where you’ll be greeted with three different options, you have the Train Heist which is the lowest volatility, the old saloon which is exactly the same as the original game and the High Noon Saloon which is super high variance. 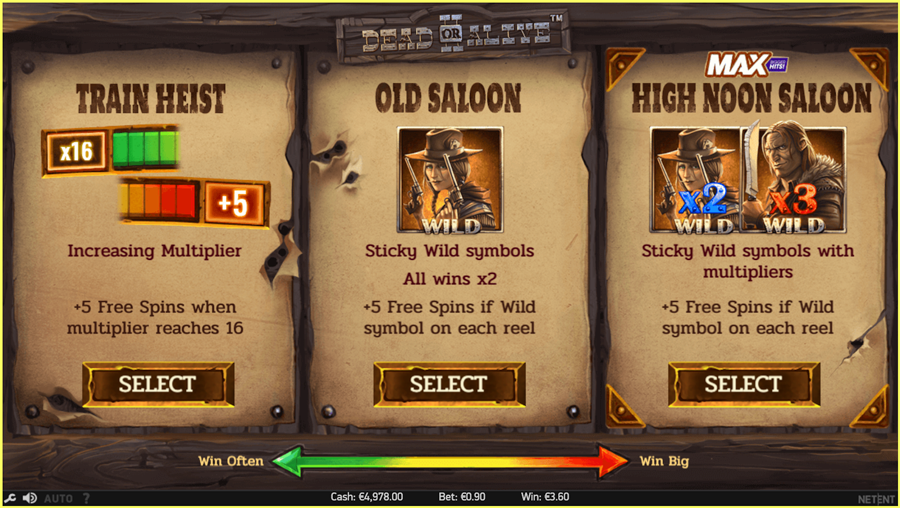 Let us start with the Train Heist first, in this feature you start with 12 spins and for every wild that lands you get an extra spin and the multiplier increases by 1x, if you reach 16x multiplier you get a 5 spin re-trigger, the multiplier can also still increase over those extra spins if you land any wilds. I played this over and over to get an example of a good bonus and I managed to get the re-trigger and the multiplier to 18x, with 2 wins through the whole bonus of 4x J’s and a full line of J’s the end result was 110x my stake. This win seems rather low but then this is the lowest variance feature and if Id landed a full line of Sheriff Badges the win could’ve been precisely 2000x so it still has potential, there’s no doubt about that. 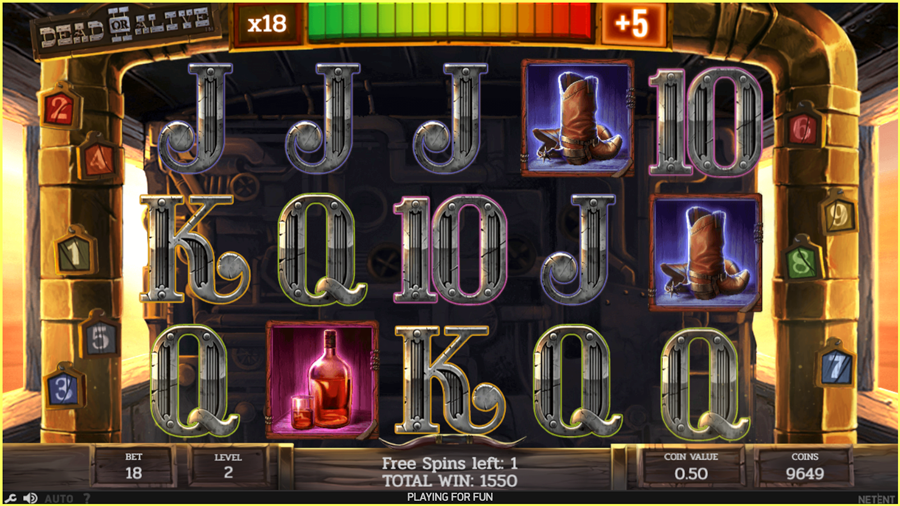 The next feature were going to look at is the Old Saloon which is identical to the original Dead Or Alive feature where you get 12 free spins and a 2x multiplier and any wilds that land stick in place for the remainder of the feature, you also get a 5 spin re-trigger if you get a wild on each reel and that’s it, nice and simple and always available if you fancy a bit of the classic game but with vastly improved graphics and sounds to heighten the experience. The max win I’ve seen on this feature since the game was released back in 2009 was just over 10,000x stake which was 13 wilds and rarer than hens’ teeth! 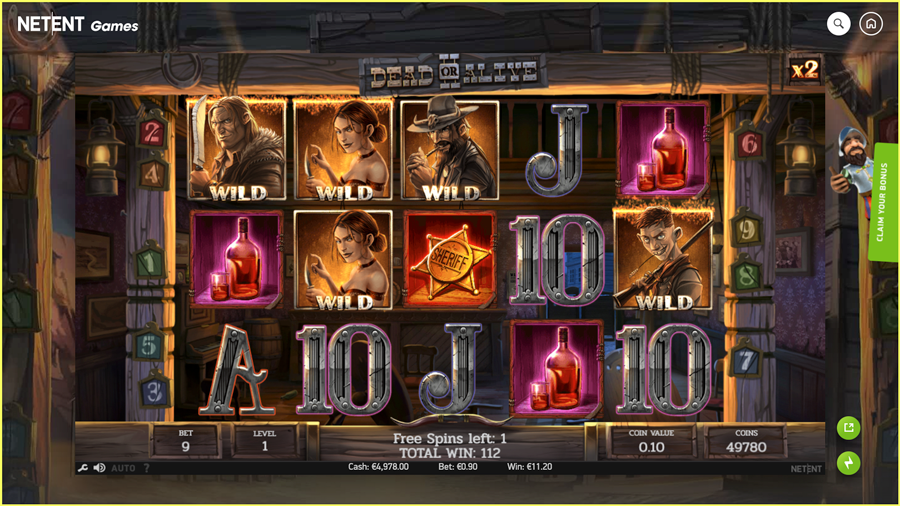 The final feature is the High Noon Saloon which is very similar to the previous feature where you get 12 free spins and the wilds stick, but in this feature you need to get two or more wilds on the same reel to make those wilds multipliers, if you get two of the same wild on one reel they become 2x multipliers and if you fill the reel they all become 3x multipliers, these will also multiply each other like Raging Rhino if you get this on more than one reel and that’s where the true potential in this feature lays. 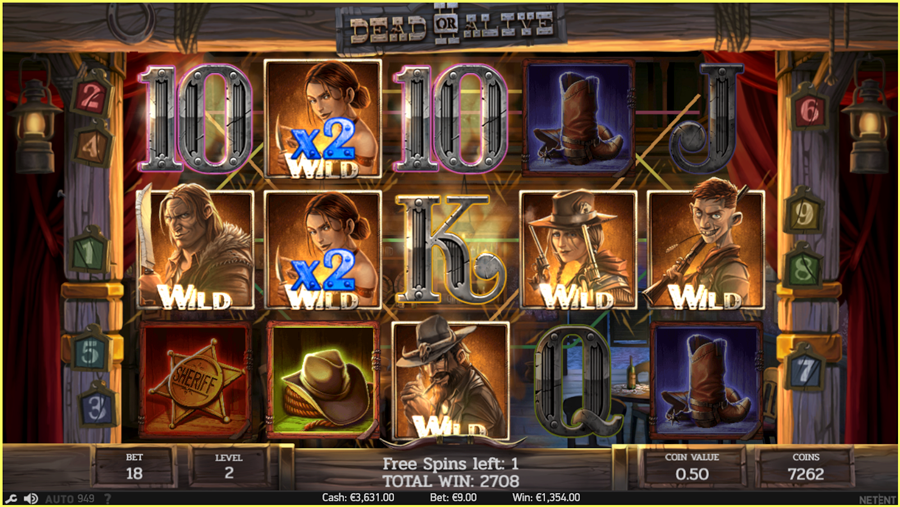 High Noon Saloon is the feature with the highest variance, so high that it has the potential to pay a maximum of over 100,000x your stake and to put that into perspective that would be a win of over £9000 on a 9p spin, a low rollers delight and at the same time a dream for the high roller who wants to try and win a million pounds on a £9 max bet. I played the highest variance feature just 3 times before it landed a nice 200x win pictured above, the others were less than 10x stake and I think that will come to be the norm from this bonus most of the time, simply because the variance is absolutely insane.

The paytable in Dead Or Alive 2 is identical to the paytable in the original version which is reassuring, there are 10 different symbols and starting with the non premiums we have the 10’s that pay 2.7x your stake, the J’s pay 4.4x, the Q’s pay 5.5x, the K’s pay 8.3x and the A’s pay 11x for a 5 of a kind but like I said in the first review, these symbols are basically irrelevant as we want the features and the wilds! 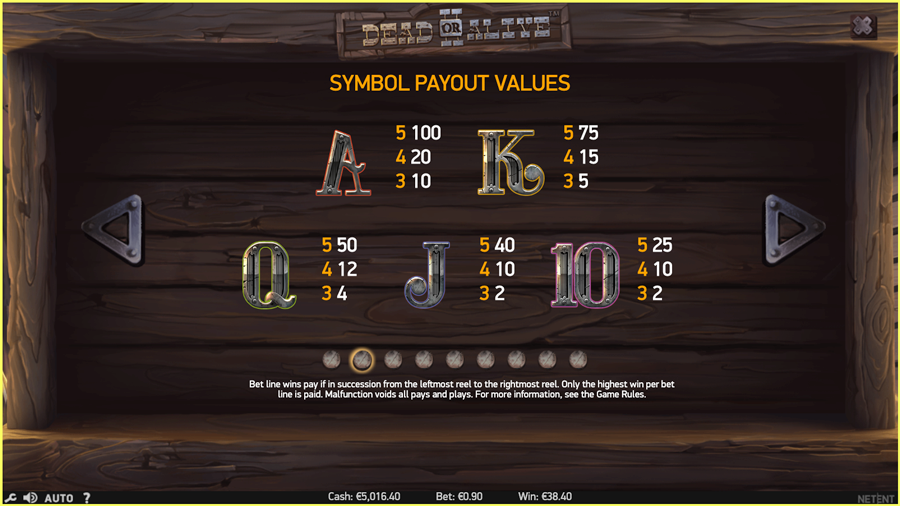 The premium symbols in Dead Or Alive 2 are also the same as the original just with a fresh makeover, and I must say Netent have definitely excelled themselves this time as they look beautiful, now lets run through what they pay. The whiskey bottle and glass pay 22x for 5 of a kind, the boots pays 33x, the hat pays 44x, the pistol pays 83x and the sheriffs badge pays a healthy 111x which is the same as a wild line. 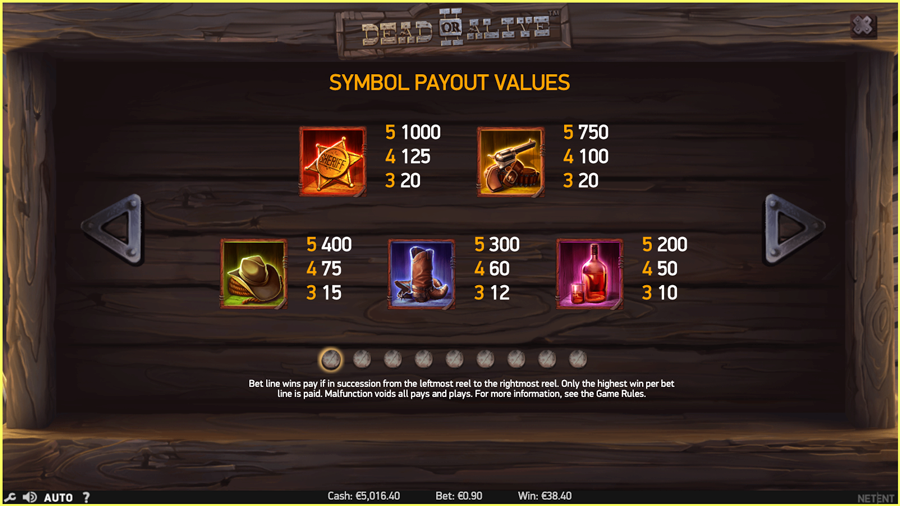 Im also pleased to report the scatter pays have remained the same and you can still win a whopping 2500x your total stake for landing all 5. 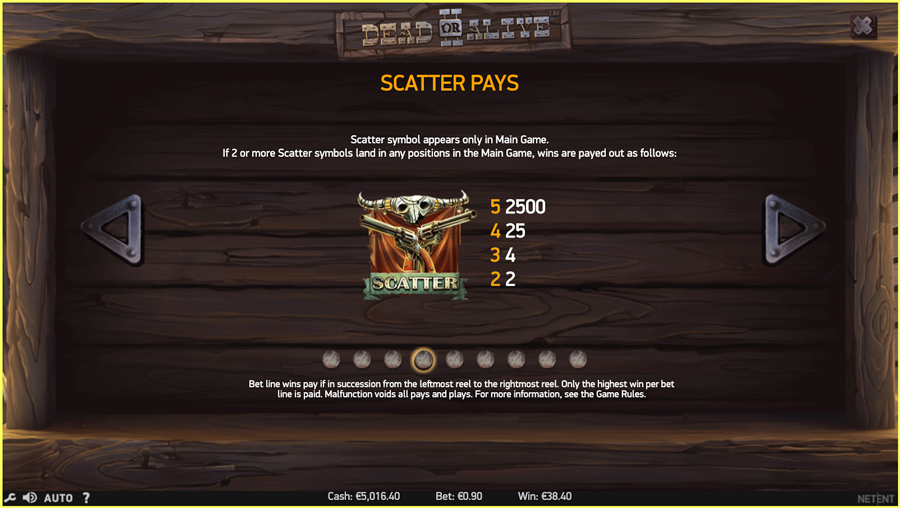 Final Thoughts On Dead Or Alive 2

Dead Or Alive 2 has an RTP of 96.8% which is also exactly the same as the original, combine that with the choice of features, the beautiful graphics and soundtrack and the option to play the original feature combines to make an outstanding game and that is not something Iv said about Netent in a long time so kudos to the team. To wrap up this review I would highly recommend this to any slot players out there new or old, as always thanks for reading and if you fancy a spin theres a link to a TGC approved casino below, giddy up!

[…] are really spoiling us this month, first we get Dead or Alive 2 and now we get a slot based on the Netflix series Narcos, the series was based in the 1980’s […]