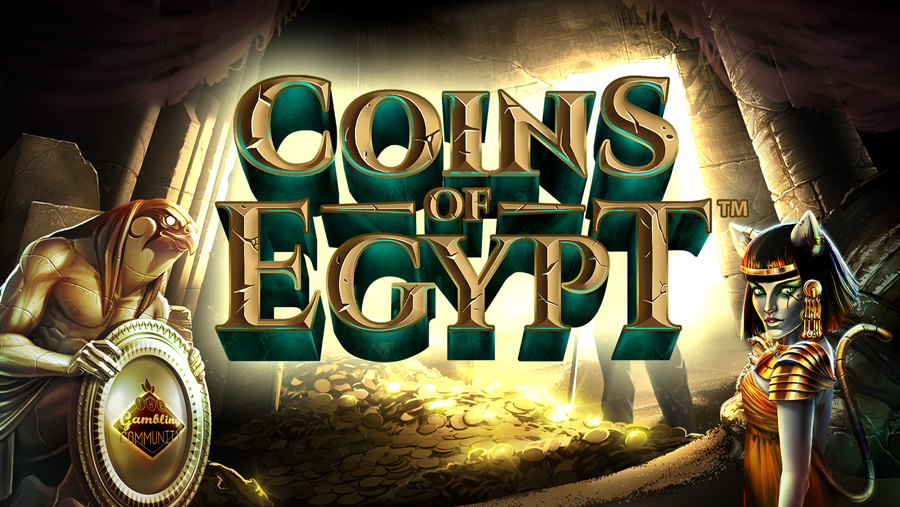 Overview Of Coins Of Egypt

Coins Of Egypt is one of the latest release’s from Netent and as the name suggests it’s set in ancient Egypt with Pharaohs and Gods galore, Netent boast’s of it’s intuitive gameplay and low variance so I’m keen to test it out, could this be a replacement for the likes of Starburst? I doubt it but there’s always hope, Netent also said I will leave on my camel with bag’s of riches but I don’t own a camel so it’s unlikely, let’s play along anyway and see!

Coins Of Egypt has a 5 reel by 3 row setup and plays on 20 fixed paylines, there are 2 features to the game, 1 in the base game and 1 thats awarded for landing 3 scatters, the base game feature is called Pharaohs coins and we’ll look at that first, every spin 1 to 3 coins will land on the first 3 reels and each coin will have a value of 2x to 15x your total bet and if you get a Pharaoh on the 5th reel you win the coins on top of any winning lines, this gives you the chance to win up to 45x as an extra on any spin, it’s not a lot but then this game is low variance so it’s to be expected! 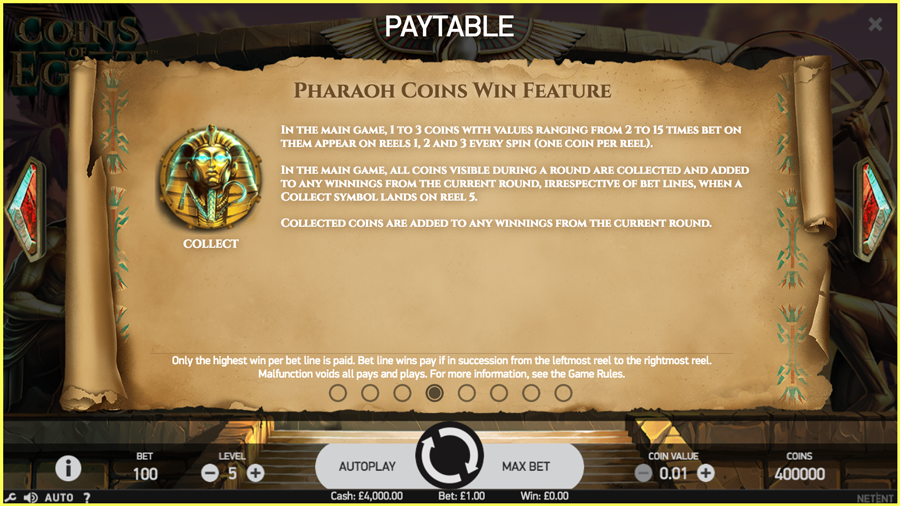 The next feature in Coins Of Egypt is the Free Spins round that’s awarded for landing 3 scatters, the scatters are only present on the 1st, 3rd and 5th reel and upon triggering the bonus any coin values that are present on the reels are transferred over to the start of the feature, this will make sense in a moment!

During the freespin round you have 3 chests with corresponding colours to the coins on the reel’s, any coins that land during each spin are added to there relevant chest and the amounts progressively build up, as you play the freespin’s you will get any 1 of the matching seals land randomly on the final reel which will then illuminate a seal socket on that coloured chest, get all 3 sockets illuminated on any chest and you win the amount gathered for that particular colour seal and the freespin round is over, it’s worth noting that the freespin’s will carry on indefinitely until you win a chest so there will never be a zero paying bonus round on this slot!

The paytable in Coins Of Egypt is displayed in amounts of coins per level and doesn’t change with bet size making it that little bit more tricky to fathom out as with most of there games so let me decipher it for you! The small purple beetle pays 5x for a full line, the silver diamond beetle pays 6x, the green club beetle pays 7.5x, the gold spade beetle pays 10x and the red heart beetle pays 12.5x, I like how they used the suits from cards and incorporated them into the creepy crawlies, nice touch Netent! 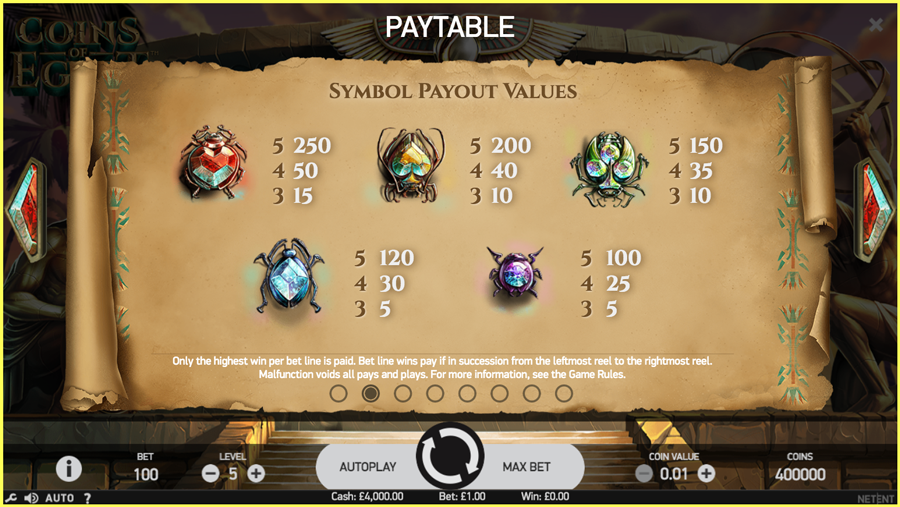 Moving onto the premium symbols and God’s we have the purple scorpion paying 15x for 5 of a kind, Anubis the dog at 20x, Wadjet commonly known as the green one pays 25x, Bastet the God of cats pays 37.5x and finally we have Isis paying the most at 75x for a full line. 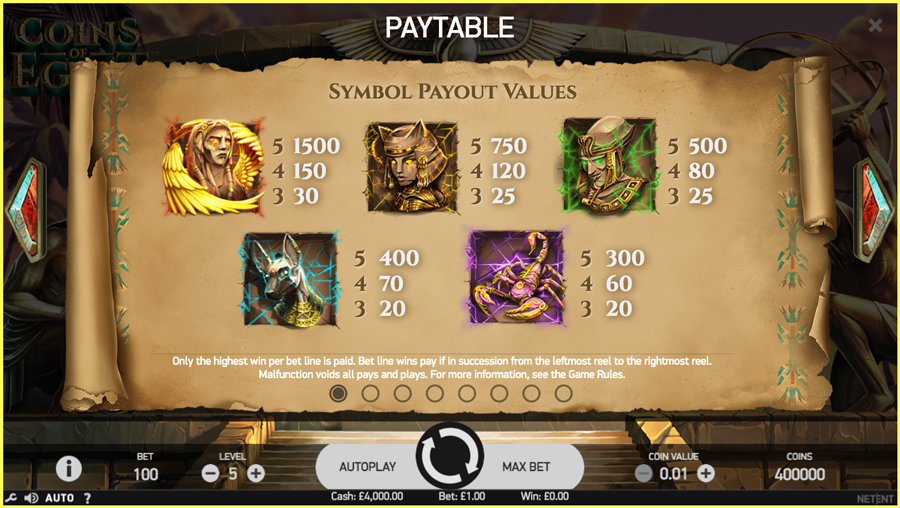 The wild symbol as shown below pays a larger premium of 150x for a full line and if you had that you could very well have a 5 of a kind of Isis as well making the top win in this game around the 200-250x your total bet, which is very low even for a low variance game, look’s like Starburst is safe after all! 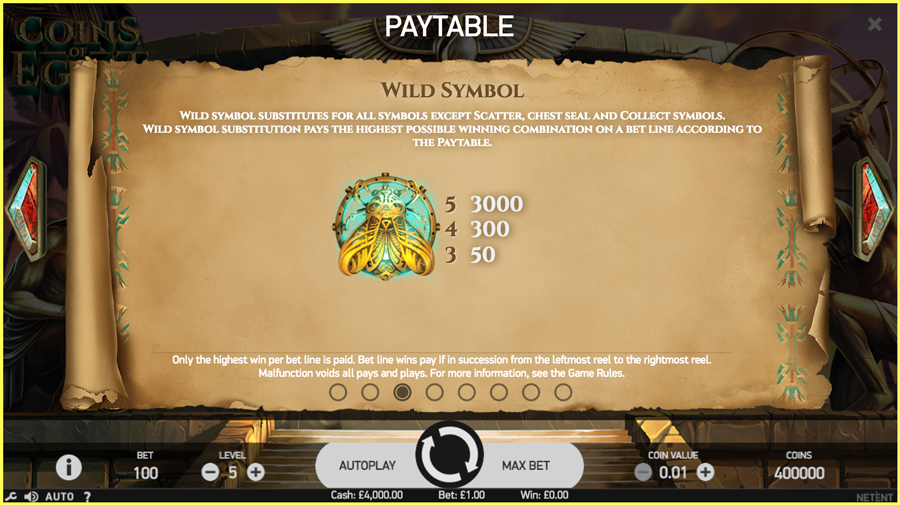 Final Thoughts On Coins Of Egypt

Coins Of Egypt has an RTP of 96.97% and is safely in the low variance category, however after playing many spin’s I’m not sure it’s low enough to validate such a small maximum win, I guess theres a chance the bonus could keep building the chests up without any seal’s landing and therefore the maximum win could be bigger than Iv estimated but as it’s a new game only time will tell as it’s not clarified in the paytable. The graphics and accompanying sounds are good and I did enjoy playing it so it’s not on the ban list by any means, it could even turn out to be a good game for wagering bonuses on, if you fancy trying it yourself there’s a link below for a TGC approved casino, thanks for reading and stay lucky!