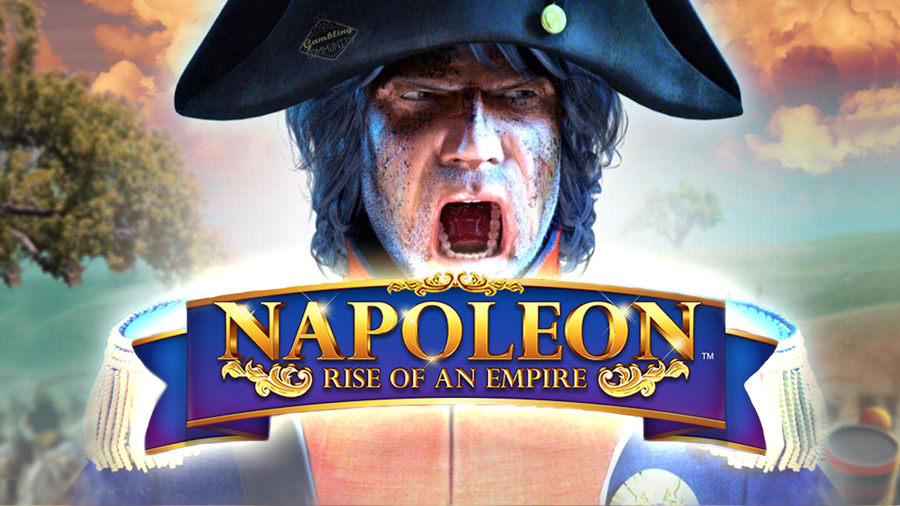 Overview Of Napoleon Rise of an Empire

The year is 1804 and the Napoleonic forces are marching across Europe and beyond. The newly crowned Emperor of France is rallying his troops to conquer main-land Europe, humble the lands of Egypt and tame the lands of Russia. This is truly the Rise of an Empire! Welcome to the new slot from Blueprint, Napoleon Rise of an Empire exclusive to White Hat Gaming and only available to play now at 21casino.

Napoleon Rise of an Empire has a 5 by 3 reel setup with the standard 20 lines we have become accustomed to from Blueprint. Your aim is to land 3 scatters to start the feature of 10 freespins, the scatters are only available on reels 2,3 and 4. There are also 2 base game features where Napolean appears over the reels and shouts attack, this then triggers either the bonus modifier where extra scatters are added to the middle reels or the wild multiplier where extra wilds are added to all reels increasing the chance of either a bonus or wilds landing on that spin.

During the freespin round there is an extra feature called the Napoleon streak where any winning symbols will lock and the reels respin, this then locks any extra winning symbols until no more match, this will be familiar to anyone who’s played Fortunes of Sparta or had the Bagheera freespins in Jungle Jackpots, the freespins can also be retriggered if you land 3 more scatters.

It’s unusual to only have 2 base game features in a regular blueprint but the reason why will become apparent when we take a look at the paytable! 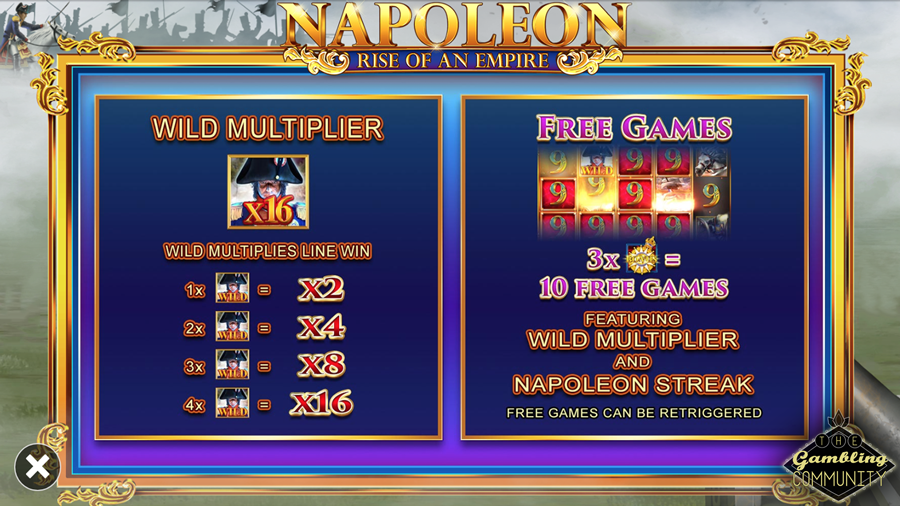 Napoleon Rise of an Empire Paytable

The pays below are based on a £1 spin which gives you a coin value of 5p, the minimum bet is 20p and the maximum is £40 per spin. Starting with the lower value symbols we have the 9’s and 10’s which pay 4x stake for 5 of a kind. The Queens and Jacks pay double this at 8x and the Aces and Kings pay 16x for a full line, the cannon and horse pay 24x and 32x respectively.

Now onto the premium symbols we have the ship which pays 80x and the soldier that pays 200x, however there is also a multiplier available for any win depending on the amount of wilds you have in your winning line! 1 wild doubles the win, 2 wilds multiply the win by 4, 3 wilds is x8 and for 4 wilds the win is multiplied by 16x! So for a line of soldiers made with 4 wilds you would be awarded 3200x which is not too shabby for a Blueprint. The jackpot in this game would be a wild line which pays a huge premium of 5000x your stake, should you land this combination in the freespins more than once your total win would be capped at 10’000x, similarly the maximum win in 1 spin of the base game is also 10’000x for a double wild line. 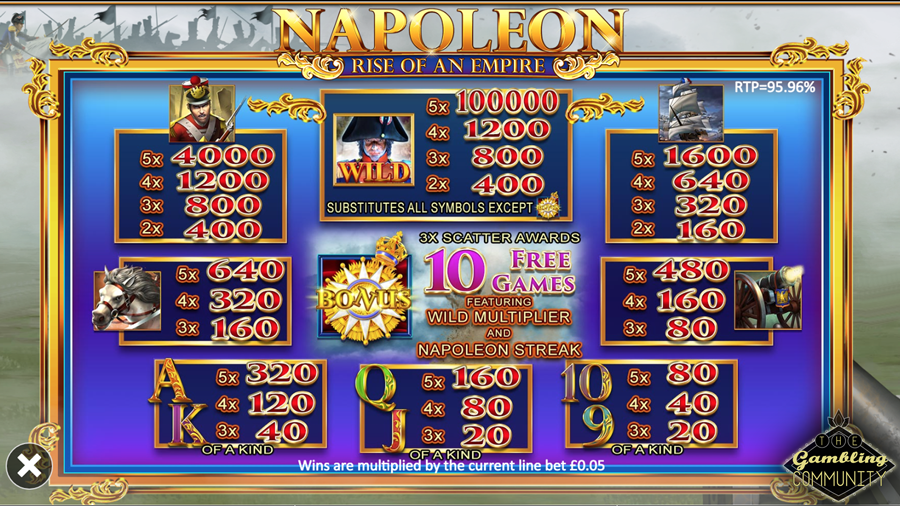 Final Thoughts On Napoleon Rise of an Empire

The RTP for Napoleon Rise of an Empire is 95.96% and the volatility is high, when I tested the game for this review I started with £100 and within 30 or so spins I was at £230 playing at £1 per spin. I had 3 bonuses and the best was just over a 100x and the worst was 40x so it felt like a regular Blueprint like TED but with the potential to pay a huge amount should you land a wild line. Now some people may say the chances of landing a wild line will be impossible, however Id like to quote Napoleon himself, he said impossible is a word to be found only in the dictionary of fools, what a great guy! Thanks for reading and if you fancy playing this exclusive release it is only available at 21casino and theres a link below, victory belongs to the most persevering!

Click here to play Napoleon Rise of an Empire

Thanks for you site. I will recommend it to my friends

Came across this site looking for reviews on this slot.. it’s by far the worst slot I have came across I played it earlier today, I went in with £758 & lost the lot on £1 spins winning a complete total of £47 from all those spins & I never got a single bonus.. how is that even fucking legal that’s less 8% return WTF!!!