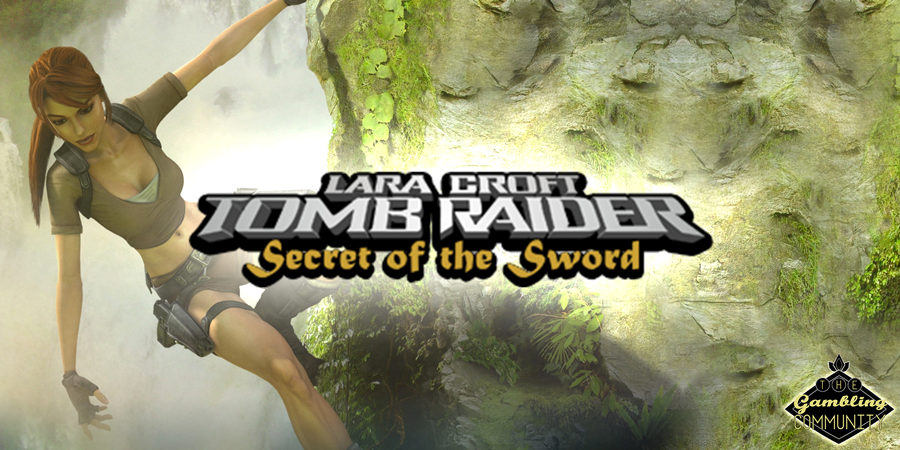 Overview Of Tomb Raider Secret Of The Sword

Today were going to look at a 10 year old classic slot by Microgaming called Tomb Raider Secret Of The Sword, now unless you’ve been living under a rock for the last couple of decades you’ll know that the franchise revolves around the busty British archaeologist Lara Croft who travels around the world infiltrating hidden tombs and ruins looking for lost artefacts and treasures. So grab your wonder bra and backpack and lets investigate this game further.

Tomb Raider Secret Of The Sword has a classic 5 reel by 3 row setup and plays on 30 payline’s which can be adjusted in 1 line increments right down to a single line. The base game has 1 feature called super mode which is triggered randomly on any spin, during super mode you are awarded 5 free spins and during these spins random wilds appear on multiple positions and stick for the duration of the feature, this gives you a fairly decent chance to get a wild line which would pay 250x your stake.

The next feature is free spins which is won by landing 3 or more scatters which award’s you 10 spins but up to 100x for the trigger if you get a scatter on all 5 reels. During this feature you have rolling reels just like the Thor bonus in Thunderstruck 2 where each win explodes and new symbols drop in raising your multiplier by 1x up to a maximum of 5x should you get 5 consecutive wins, this gives the potential for a maximum win line of 1250x if you were playing on the full 30 lines. Unfortunately the scatters are still present on the reels and award the usual prize for there appearance but don’t retrigger any extra spins. 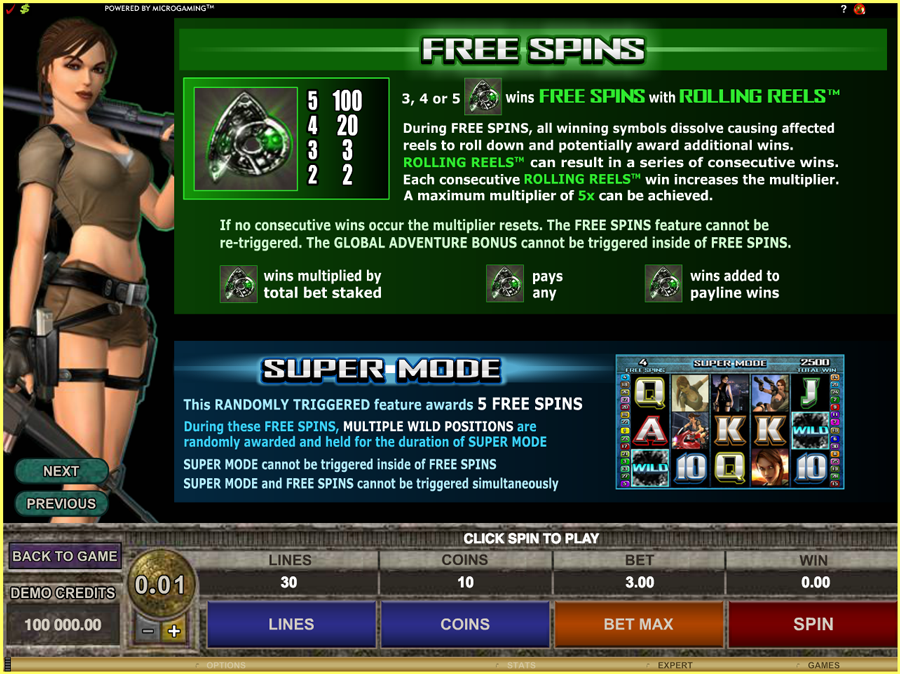 Next we have the Global Adventure bonus which you progressively unlock whilst playing the slot, each time Lara’s passport appears on the middle row of any reel it illuminates the reel blue and stay’s blue until all 5 have been collected triggering the feature. It’s worth noting the feature uses game weighting to calculate your stake and bases this average stake on every spin from opening the game up until the feature is won, this gives you the freedom to change your stake without losing progress towards the feature. 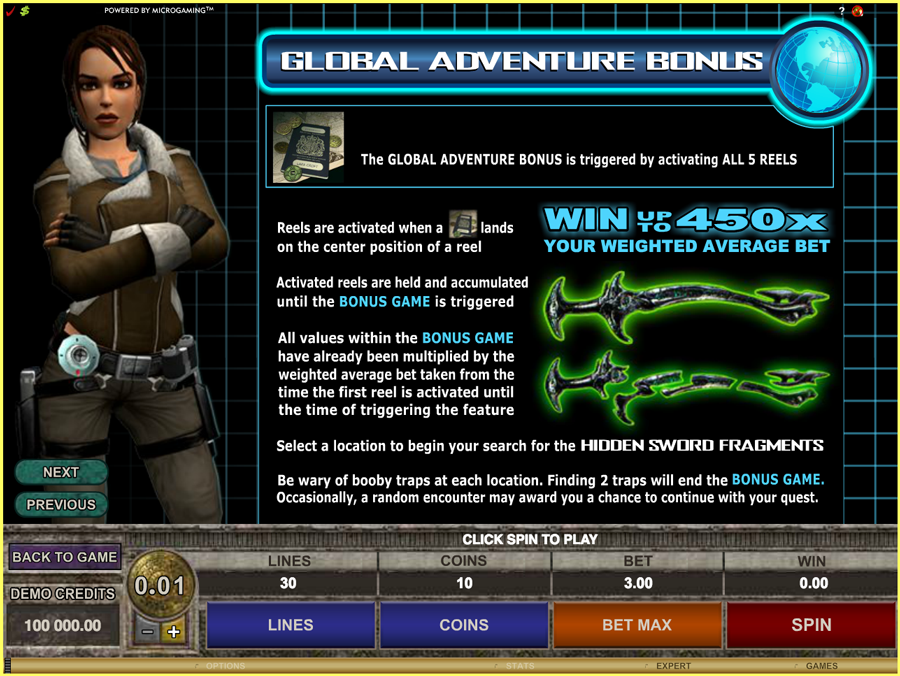 During the feature you have 5 different locations around the globe that you can visit, each location has 6 artefacts that contain an award or a trap, you have to pick one at a time trying to locate piece’s of the sacred sword while avoiding the traps, if you pick 2 traps in one round the bonus is over, if you find a piece of the sword you go back to the map to choose another location and the quest continues! During this feature you can win up to 450x your weighted stake. You can also start the hidden treasure bonus if you pick it although it is not always present and only awards up to 70x your weighted stake, in my experience of finding all the sword pieces the average total win at the end of the bonus is around 100-200x. 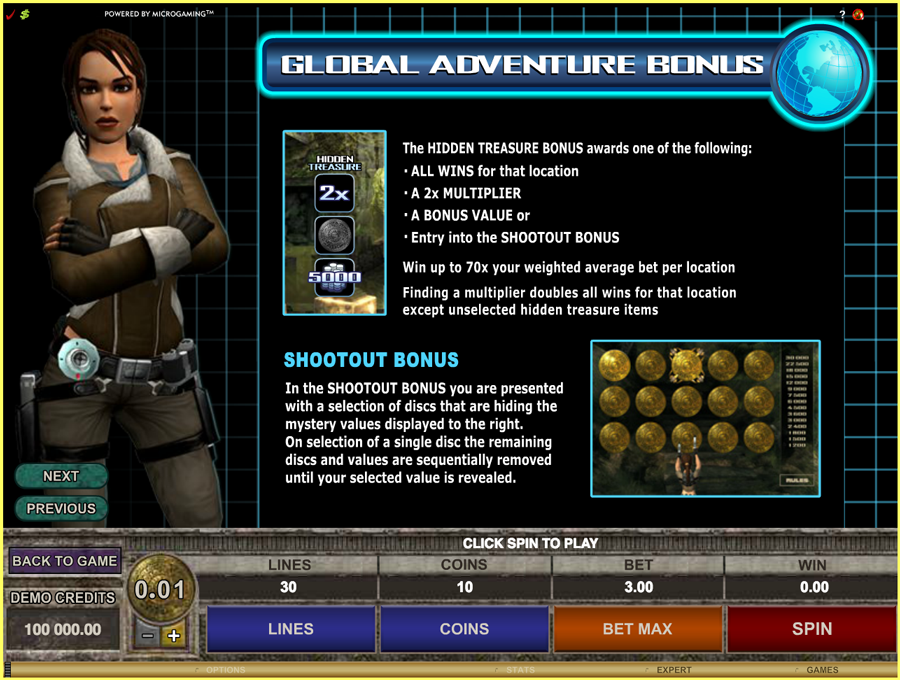 The pay table shows the amount of coins for each win and isn’t dynamic so if you were playing 10 coins for example you would need to times these amounts by 10, unfortunately a decade ago when this slot was released the pay tables weren’t as user friendly as they are nowadays! The lower symbols pay 2x to 3x for a full line, whilst the premiums pay between 10x and 66x working from right to left.

The Lara Croft face symbol is wild and has a huge premium on the every other symbol paying 250x for 5 of a kind, if you were lucky enough to get this during the free spin feature with a 5x multiplier you could potentially win 1250x, there would also be some other connecting lines using the wilds so the max win would be around the 1400x mark which by todays standards is rather low, however this slot is low to medium variance depending on the amount of lines played so you can’t really argue with a 1000x win. 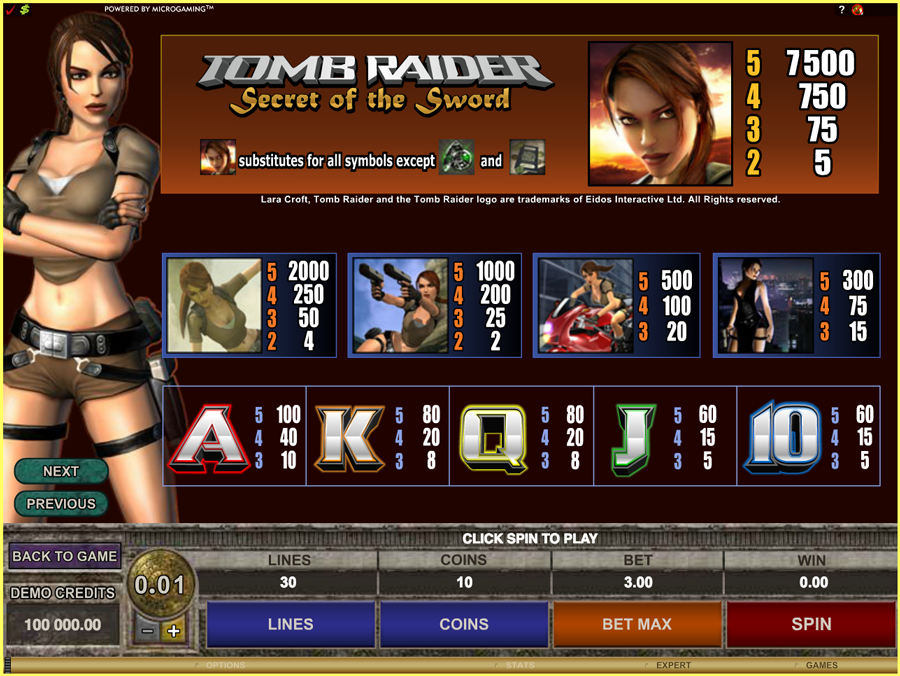 Final Thoughts On Tomb Raider Secret Of The Sword

Tomb Raider Secret Of The Sword has an RTP of 95.23% and I’d place it firmly in the low to medium variance category, the game has plenty of base game wins to keep you playing and whilst you won’t win much over a 1000x you also won’t haemorrhage your balance quickly. It’s worth noting that the reels in this game spin rather slow and there is no stop start feature to speed it up, back when this slot was made there was no hurry to get a quick fix from the slots as mega wins were something very rare and special, instead it was more for entertainment and the thrill of waiting for the next reel to stop. For me it was initially annoying but then I found myself reminiscing of the old days when I first played slots, I was also a lot more relaxed compared to quick spinning my money away on the modern high variance games!

If you fancy a go on this classic slot theres a link below and as always thanks for reading if you made it this far, good luck with your gambles!

Click here to play Tomb Raider Secret Of The Sword