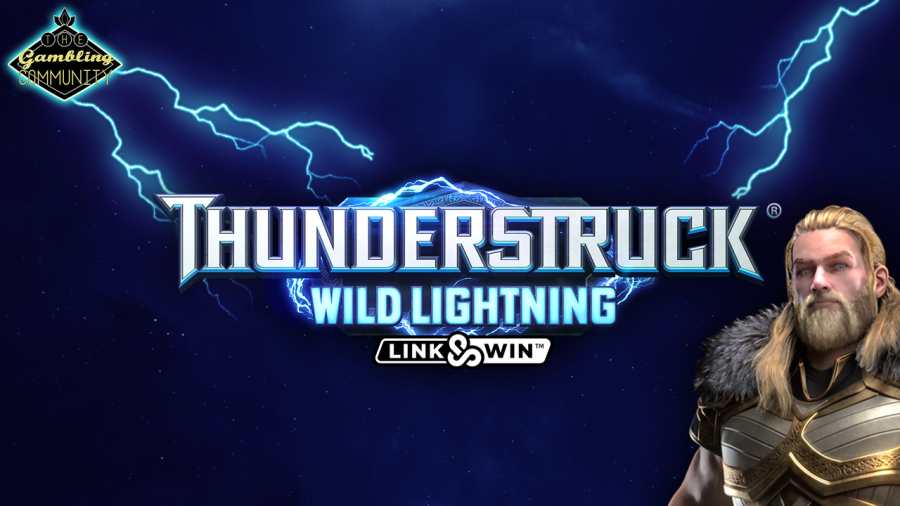 Microgaming have teamed up with Stormcraft to release the third installment of there classic slot Thunderstruck, creating a trilogy of one of Microgaming’s most popular slots ever made along with the unforgettable Immortal Romance, let the Norse themed slot immerse you in battle with the elements, namely Lightning! 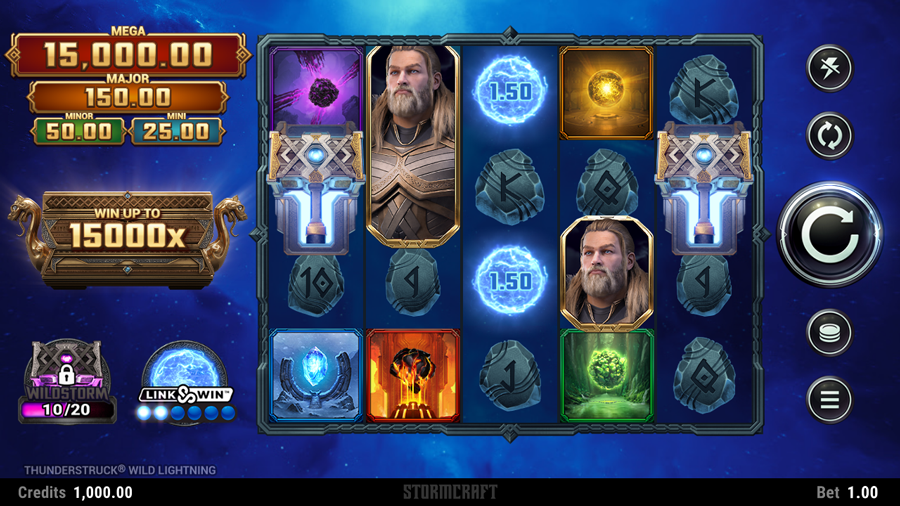 Join Thor, the new ascended ruler of Asgard on an epic quest to retrieve the lost World Stones. This 5 reel, 4 row, 40-line game journey is filled with collection challenges, feature chases, amazing multipliers, and bonus jackpots. Thor is Wild and when substituting can award a 2x or a 5x multiplier to help boost the win potential. Thor’s mighty Hammer is the Scatter and awards entry to the feature selection screen where 5 Free Spin destinations are available to unlock. The electric blue Thunderball symbols scattered across the reels provide clues to the location of the main event, where an impressive jackpot prize of over 15,000x is waiting to be won in the Link&Win™ bonus feature! 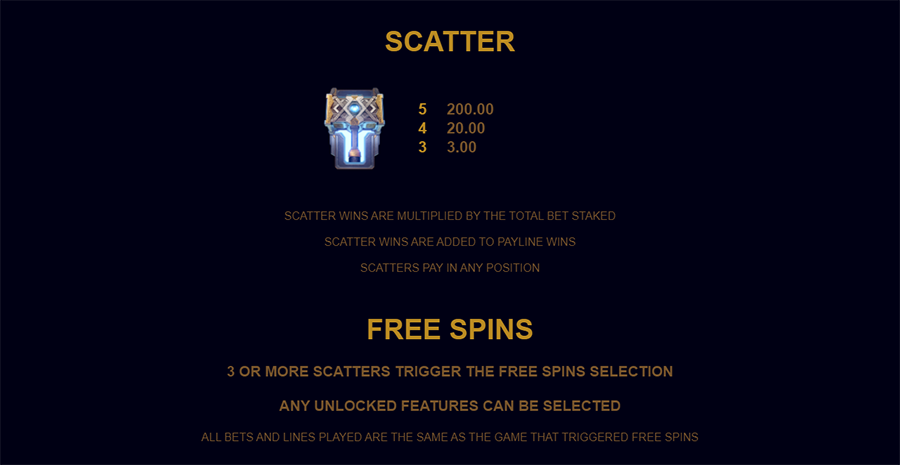 During the base game the idea is to land Thors hammers which double as a scatter, three scatters gain you entry to the feature selection page and two scatters get you 1 point towards the 20 needed for a wildstorm.

Let us start with Jotunheim Free Spins, you begin with 15 Free Spins and a multiplier of 2x, each consecutive win increases the multiplier to 3x then 5x until you have no more wins. Each time Thor lands it lights the space on the reels up, should he land in that space again he expands to fill the reel for that spin, 3 scatters re-triggers the feature with another 15 spins. The maximum win is 2000x stake for this feature. 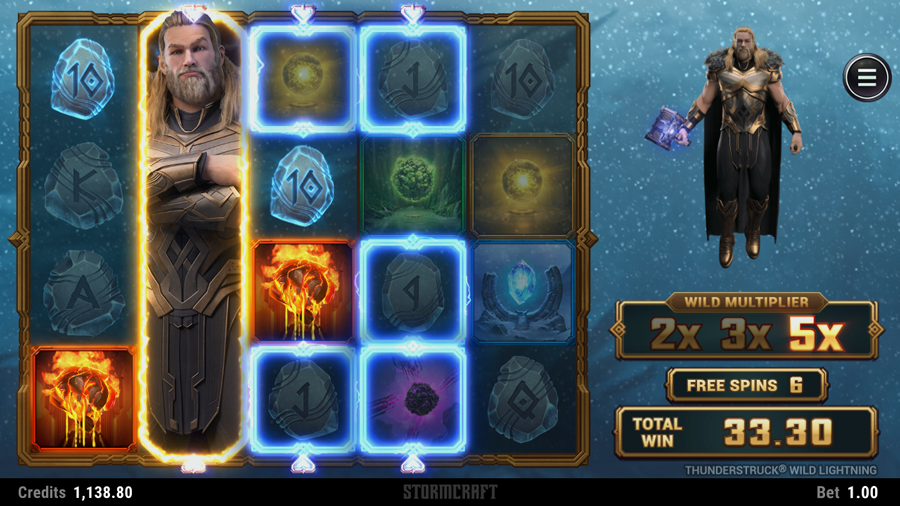 The following feature to unlock is Vanaheim Free Spins, you start with 12 Free Spins and each time a wild lands it gets a random multiplier of 2x, 4x or 6x. The feature can be re-triggered by getting 5 consecutive wins in a row and the max win is 2,125x stake. 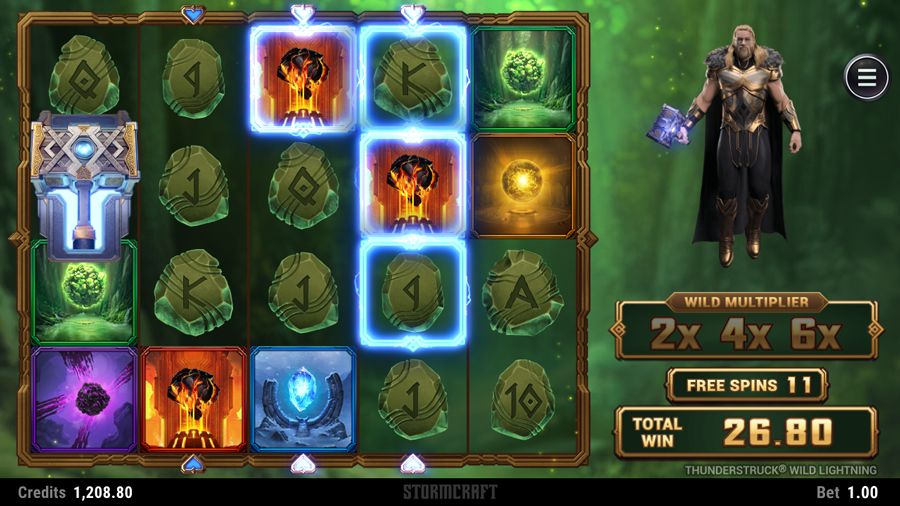 The third feature is called Alfheim Free Spins and you start with 9 spins and 3 different multipliers like before but this time 3x, 5x or 8x randomly for any wild that lands. The feature will re-trigger after 10 consecutive wins and the maximum win is 3,250x stake. 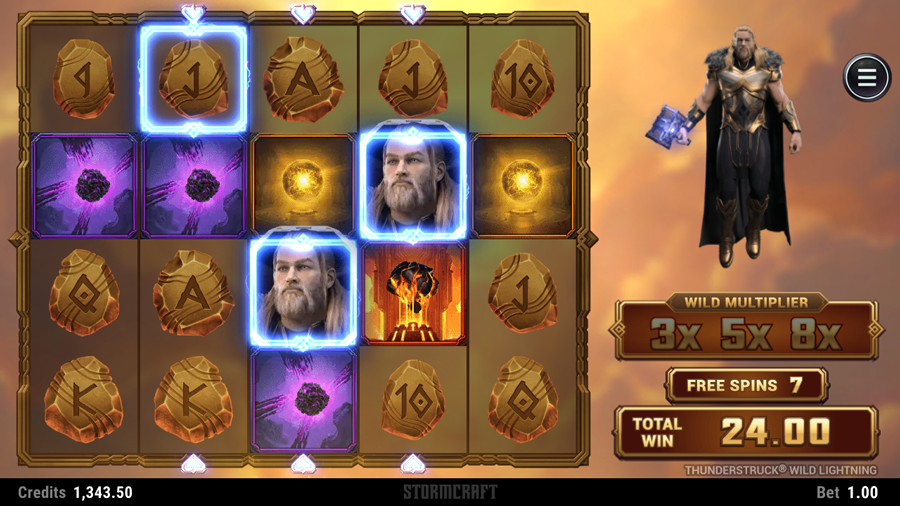 The 4th feature to unlock is called Nidavellir Free Spins and you start with only 6 spins and 3 wild multipliers as before but this time they are increased again to 5x, 8x and 12x. The feature will re-trigger after 15 consecutive wins and the maximum win is 3,500x stake. 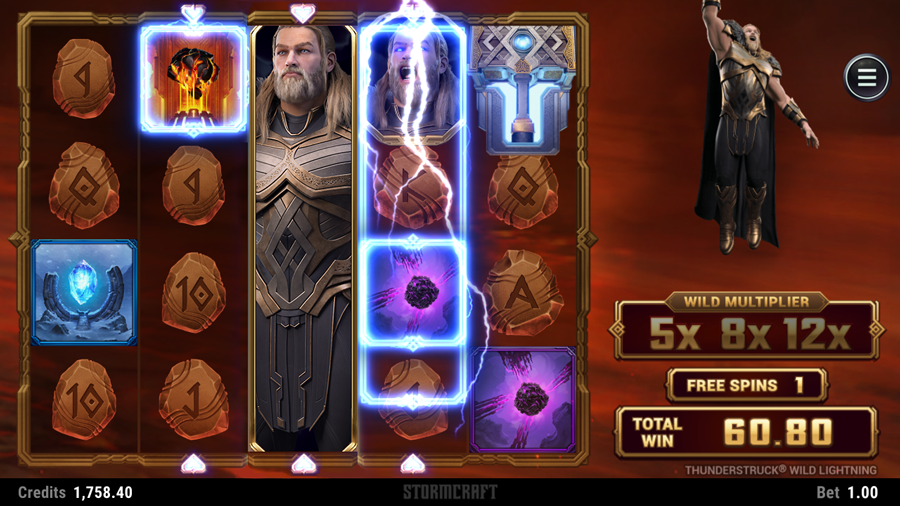 The final feature in the list is the Wild Storm from Thunderstruck 2 where Thor can turn upto 5 reels totally wild! In this installment of the game you have to save up 20 points to unlock the feature, the points are earned individually for each set of 2 scatters that land in the base game. In layman’s terms 20 teases equals 1 Wild Storm! 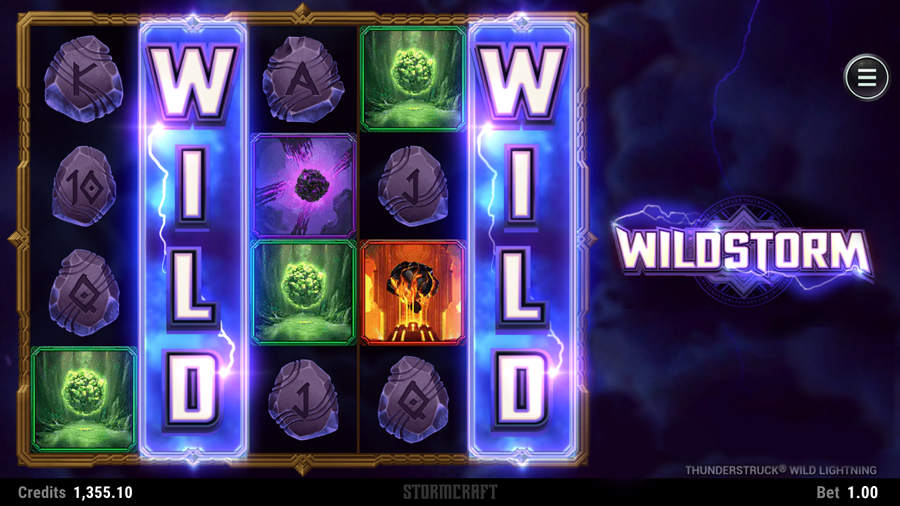 Thunderstruck Wild Lightning also has an extra party piece in the form of the Link&Win™ bonus feature. The reels contain blue orbs with cash amounts displayed and on any spin where 6 or more land you will be taken to the bonus feature as shown below. It’s a fairly self explanatory feature whereby you start with 3 spins and each time a cash amount lands the feature resets to 3 spins until you have 3 dead ones, it’s also the key to the maximum win of 15,000x stake should you get all the way! 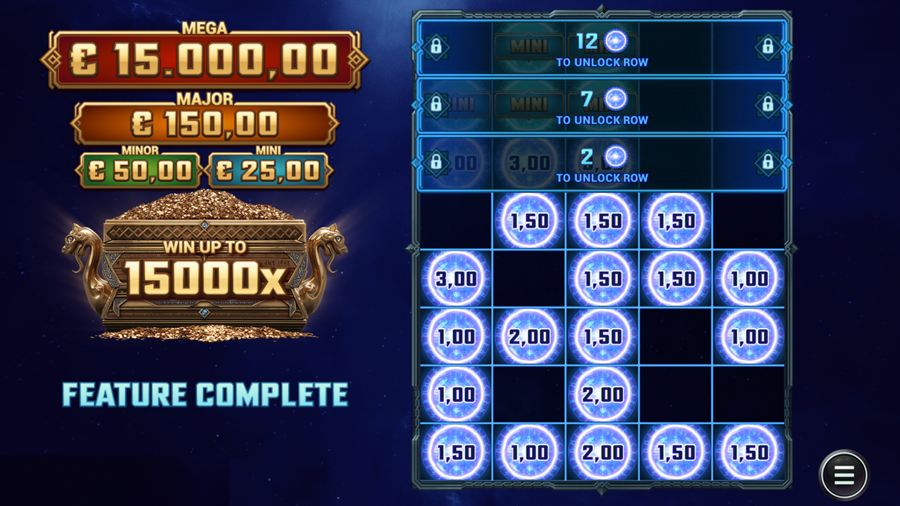 The paytable in Thunderstruck Wild Lightning is dynamic and changes with your stake which is how all pay tables should be, the example shown is set on £1 per spin. Starting with the lower paying symbols we have the 9’s and 10’s paying 2.5x for a full line and the K’s and A’s pay slightly more at 3x per full way. 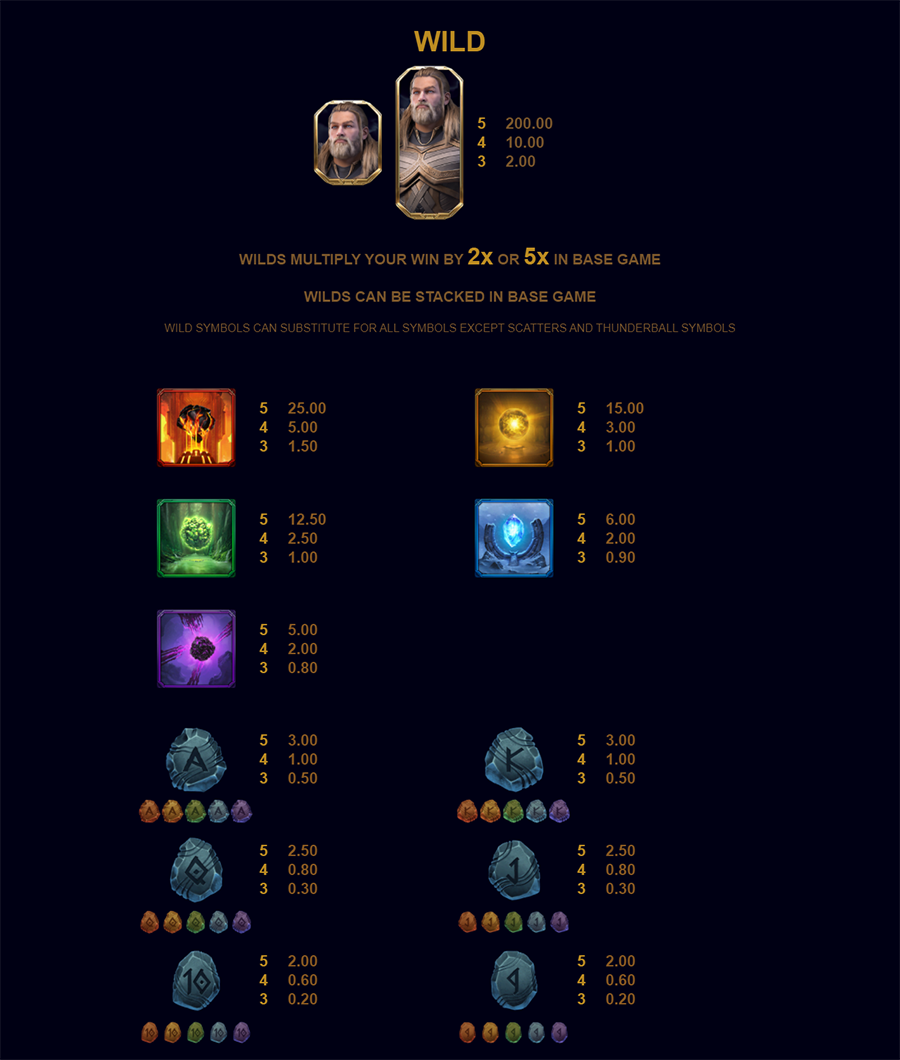 Now moving on to the premium symbols we have the Purple rock paying 5x, the Blue rock pays 6x, the Green rock 12.5x and the Yellow rock 15x, the Orange lava rock pays 25x per full line and the top symbol of Thor which also doubles as a wild pays a whopping 200x per full line!

Thunderstruck Wild Lightning has an RTP of 96.10% and Microgaming rate the volatility as High which I’d agree with. My observations playing the game were that it’s definitely had a lot of production put into it with the polished soundtrack and video game like graphics, you can see each individual hair on Thor’s beard for example, but slots are not all about graphics as we know.

The mechanics of the game saw the Link&Win™ bonus feature activate a lot more than the main feature, however this has the maximum potential so maybe it’s not something to grumble about. My first feature returned over 200x stake which shows Microgaming haven’t totally softened the game like lots of providers do with remakes of old classics and that can only be a good thing.

It will definitely get some playtime from me just to unlock all the features and give them a good chance to pay me, the games been out a day now and I’m already seeing some big wins posted online so if you fancy giving it go there’s a link to a TGC approved casino below. As always thanks for reading and keep it responsible if you do play, and don’t forget to share your wins on the forum!