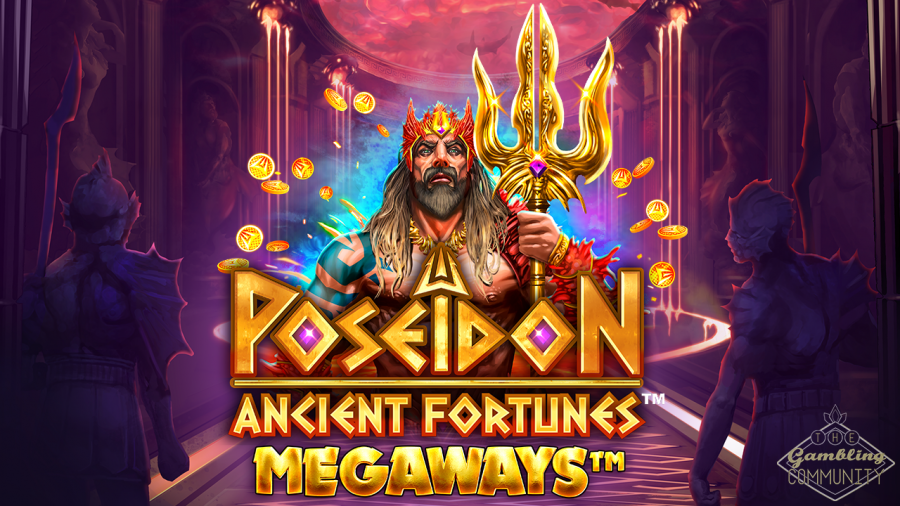 Microgaming have teamed up with Triple Edge Studios to deliver a medium volatility slot game for those players that prefer a more relaxed session but with the full 117,649 Megaways a super high variance game like Bonanza would deliver. At only a day old lets see how it plays… 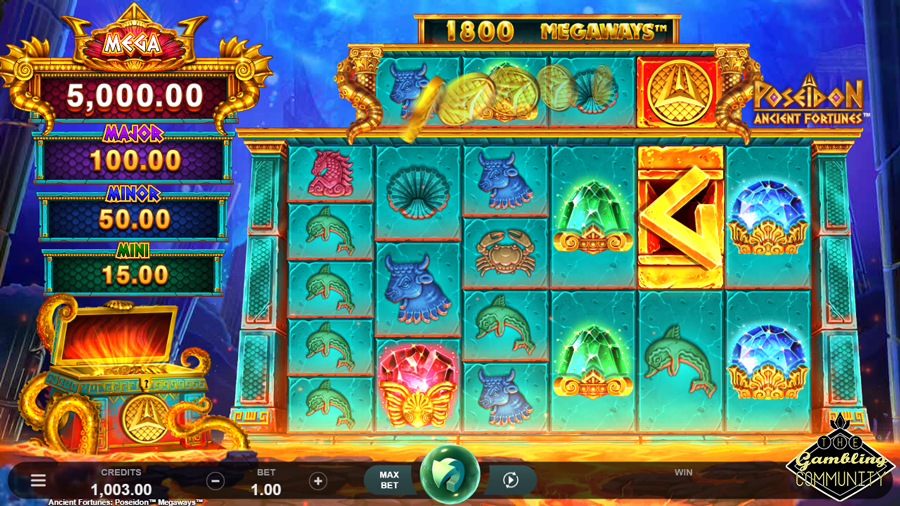 Ancient Fortunes Poseidon Megaways is a 6 reel slot with upto 117,649 ways to win and utilises the rolling reels mechanic where each win explodes to allow a cascade and potentially more wins, this can of course continue for many series of wins.

The theme is based on Poseidon from Greek Mythology, a bad tempered and greedy Olympian god who ruled the sea, earthquakes, storms and horses. He ended up swallowed by his paranoid father but was eventually saved by his brother Zeus. 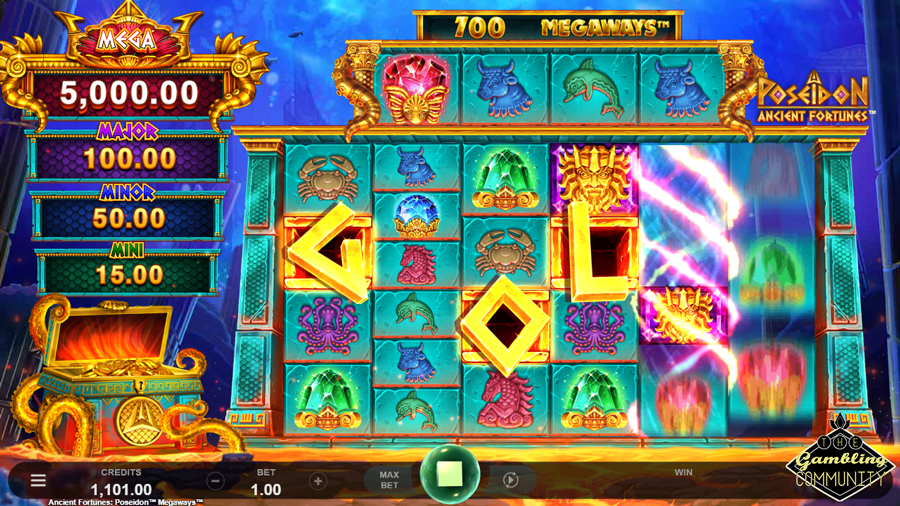 During the base game the idea is to land 4 scatters to spell GOLD exactly like you do in Bonanza which I felt was a bit lazy but then I understand the D has a cult following on social media and it is a Megaways game after all. 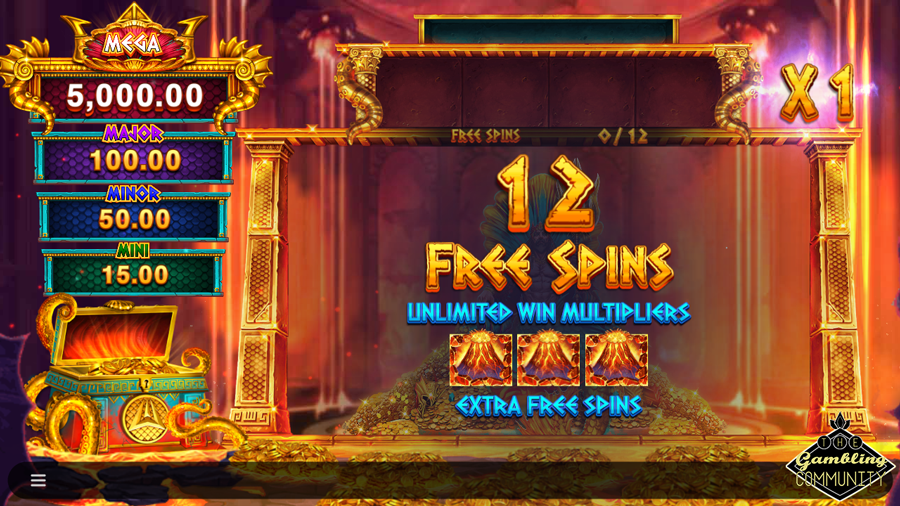 For every extra scatter you are awarded another 5 free spins on top of the initial 12 spins and during the feature you can re-trigger with the top reel only, the multiplier starts at x1 and increases with each cascade, there’s no maximum multiplier either. 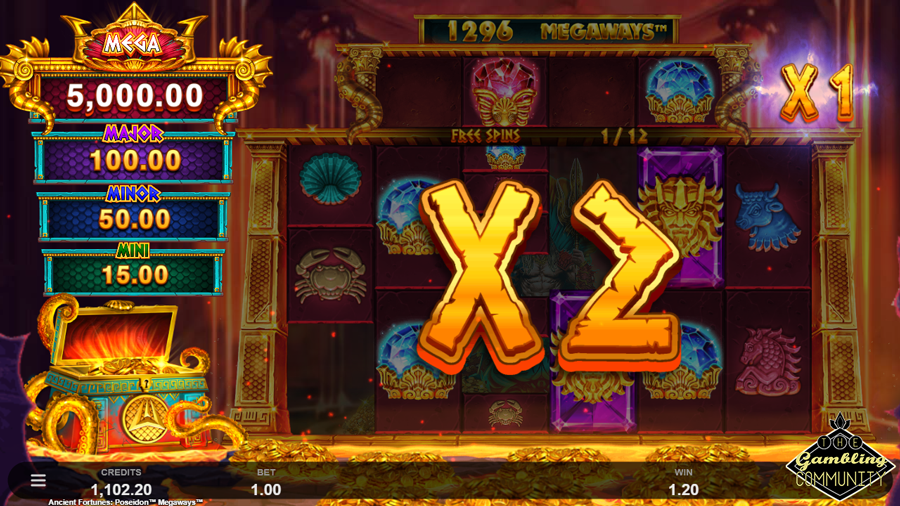 During the base game you can also land golden coins which randomly trigger the picking bonus where you are guaranteed to win one of the 4 jackpots on offer. The Mini is 15x stake, the Minor is 50x, the Major is 100x and the Mega is a very respectable 5000x! 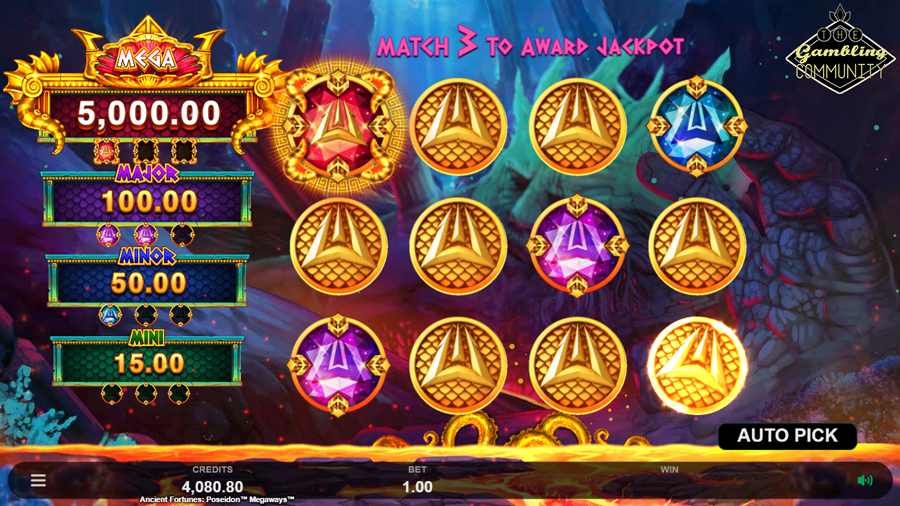 The total win for my test feature was 40x stake which fits perfectly in with the medium volatility advertised, however the base game can get a bit monotonous as every win is celebrated with Poseidon shouting like the commentator in Sega’s Ridge Racer! For some players though I know it will tick an extra box as it feels as if the narrator is playing with you!

The paytable in Ancient Fortunes Poseidon Megaways is dynamic and changes with your stake, the example below is set on 1 credit for simplicity. Starting with the lower paying symbols we have the shell paying 0.8x for a full way, the crab pays 0.9x, the Green Dolphin and Blue Bull both pay 1x stake and the Pink Sea Horse and Purple Octopus both pay 1.8x stake for a full way, not very exciting so far. 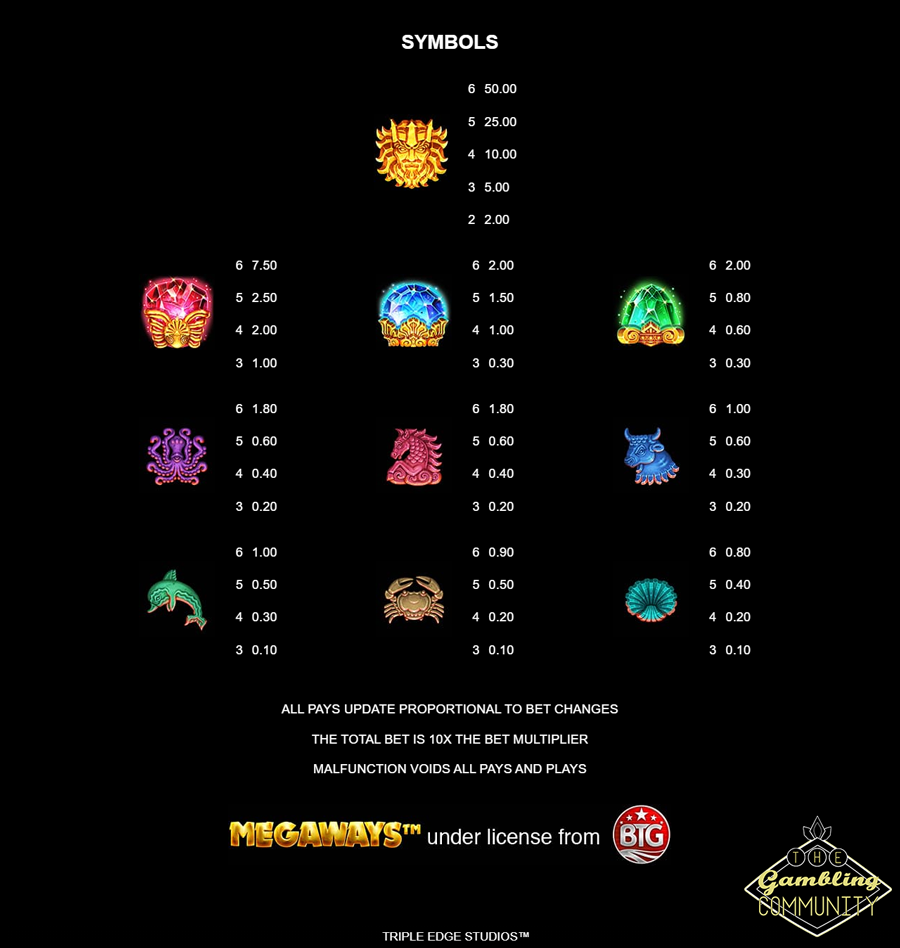 Moving on to the premium symbols we have the Green and Blue Gem paying 2x for a full way, the Red Gem pays 7.5x and the Gold Posiedon symbol pays substantially more for a full way at 50x stake. Ideally these are the symbols we would be hoping for in the bonus with a decent multiplier.

Ancient Fortunes Poseidon Megaways has a fixed RTP of 95.98% and I’d agree the volatility is medium, I’d also like to point out the low volatility can make the base game feel a bit monotonous with the small wins over and over, the money is really in both of the features so without those I can see a very slow balance drainer, something to note when you play it.

On the positives it has a couple of ways to win 5000x without the nosebleed variance of games like San Quentin from Nolimit City, would I play it again? Probably, but amongst a sea of other Megaways titles it just seems a bit plain. As always thanks for reading and if you’d like a go there is a link below.