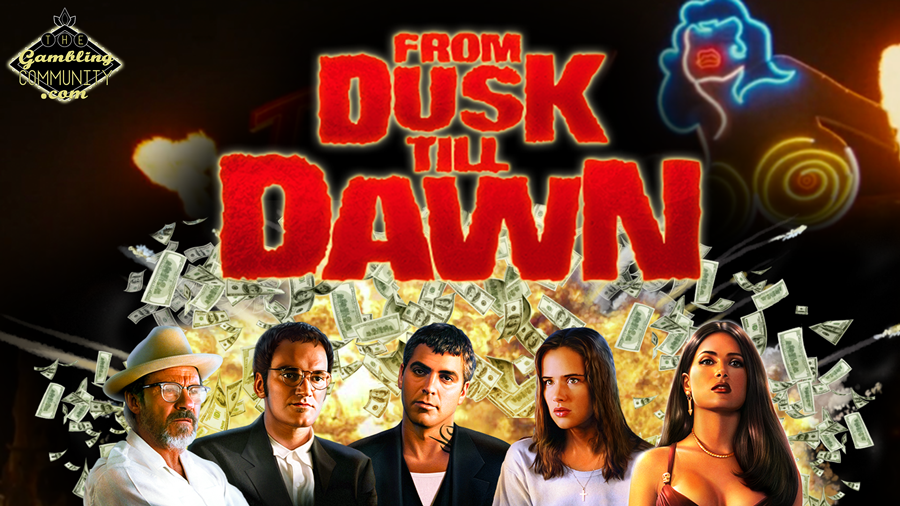 Overview Of From Dusk Till Dawn

Today we look at the latest offering from Novomatic, this slot’s based on the 1996 Tarantino classic From Dusk Till Dawn. The film is based around Fugitive bank robbers Seth and Richie Gecko, a pair of brothers who are on the run for a bank robbery and murder and the slot follows them to the Twister bar where most of the film is based. Now everybody be cool and lets see if the slots as good as the film!

From Dusk Till Dawn is a 5 by 4 reel setup that has 50 lines, the symbols can be standard size or double size for any of the 4 characters apart from George Clooney’s character Seth who has triple sized symbols. The game features 2 progressive jackpots that start at a reset value of £5 and £200 respectively and from my research are awarded fairly regular much like the smaller jackpots in games like Mega Moolah.

There are also several base game random features, pictured below was the ‘everybody be cool’ feature where all picture symbols turn to the top paying symbol Seth, the next random feature is the ‘on the run’ bonus where a speeding car comes across the screen and the symbols spin around revealing wilds, the win is awarded once the symbols stop. Last but not least is the ‘cash explosion’ bonus where a bell rings after any win and you are awarded a random multiplier of between 5x and 25x, this may be where the potential lies as you will see when we take a look at the paytable. 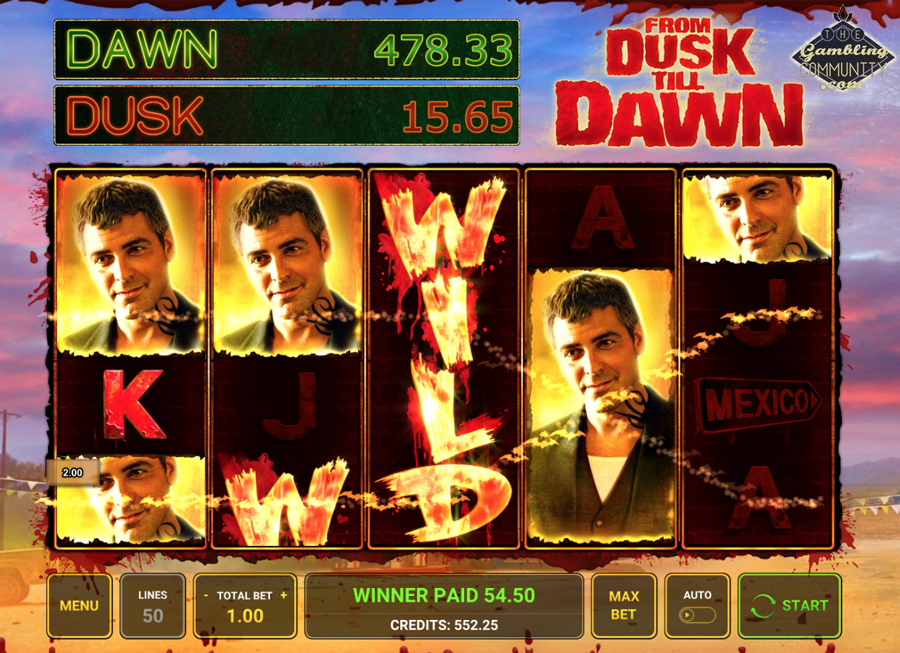 The main feature of the game is awarded when you get 3 twister scatters which are only on reels 1,3 and 5. This then takes you to the wheel pictured below which I was quite disappointed with when I first saw it as it dawned on me that I might not even get the freespins! As it happens the 3 times I got the bonus the wheel landed on the pick a bonus option rather than the awful 1x to 5x options. 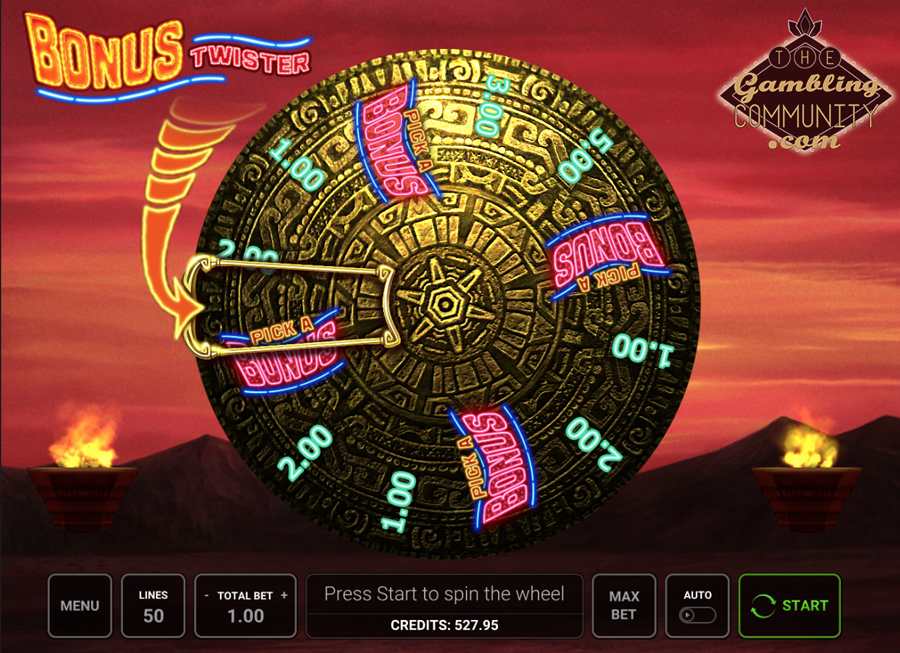 The pick a bonus offers 2 options, the first is the dancing bonus where you get 10 freespins with a dancing wild that can cover from as little as 2 symbols up to 12 symbols on the middle 3 reels. I chose this bonus twice and my best bonus was 50x and that was with some pretty nice looking screens so not great.

The second bonus is the mugshot feature where you have 3 spins and each time a mugshot lands it resets to 3, very similar to the golden donut bonus in BTG’s future slot Donuts. You can land upgrades and get an extra bonus if you fill the screen, my result was 18x and that included an upgrade to the wins!

From Dusk Till Dawn Paytable

Now lets look at the paytable which for a Novomatic is nothing like the old school offerings we are accustomed to, in fact its pretty bad, without going through them all lets jump straight to the best symbol Seth and presume we had a full screen of him, we would win 50 lines of £5 and as the paytable is based on a £1 spin thats only 250x stake which for a Novomatic is terrible. I can only surmise that there’s a possibility of the random feature appearing after a win like that which would boost it up to a maximum win of 6250x win which would be much more like the Novomatics we know and love. 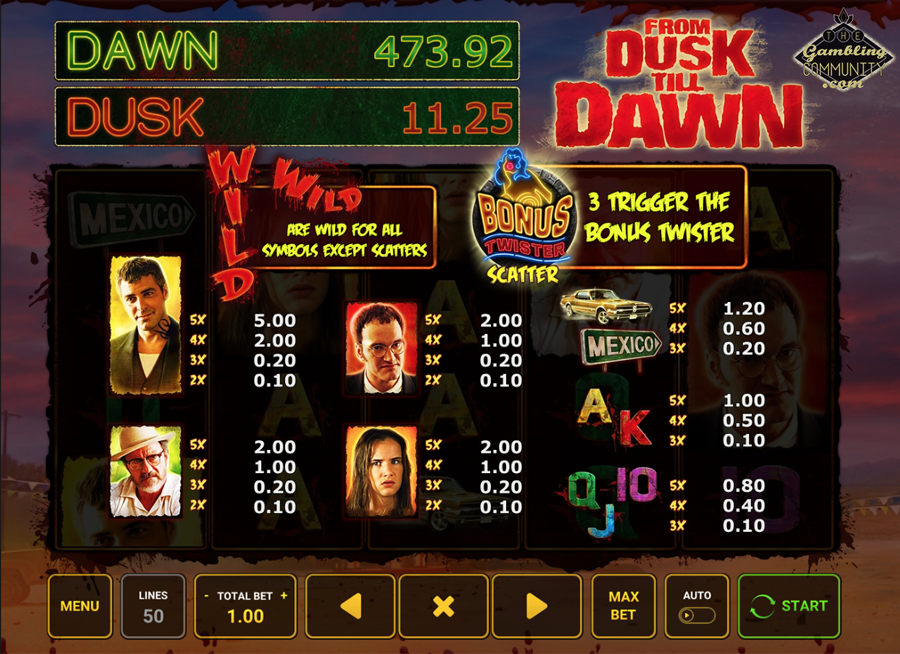 The second paytable shown is for the freespin feature which has its own unique symbols which will be familiar if you have seen the film. Theres a random feature within this feature where the first and last reel can errupt into flames and stack lots of the premium symbol’s giving you a high chance of a full screen which would pay only 100x, Meh! 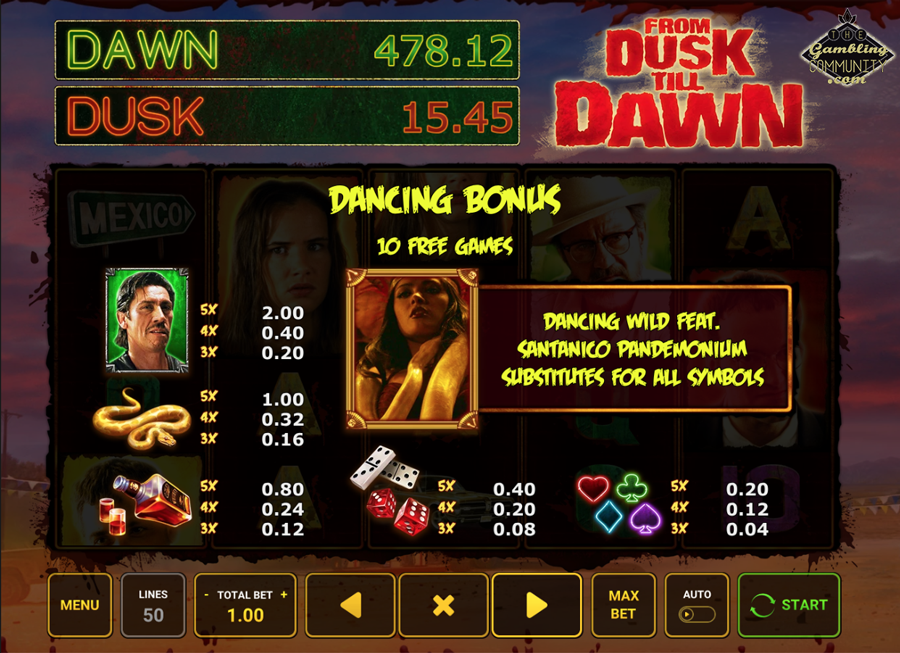 Final Thoughts On From Dusk Till Dawn

From Dusk Till Dawn has an overall RTP of 95% and 1% of each spin’s value is used to seed the jackpots, the graphics were okay, the musics good and the overall play was fun, however this is not a slot I think your going to win a lot on, but I would still play it in the future as it seemed to keep me playing with plenty of random features and nice little clips from the movie which I enjoyed. I just hope this isn’t the route Novomatic are going down as we play them for there brutal variance and amazing mega win potential, only time will tell, thanks for reading and I’ll stick a link below once the game’s rolled out across the networks.