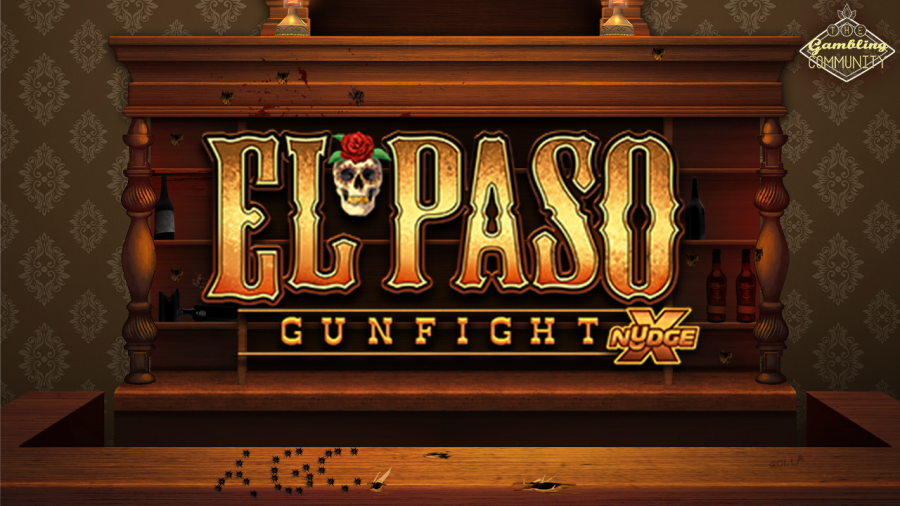 You wanted the best, so we present you the best Gunslinger in the ol’ Wild West, Sheriff Dallas Stoudenmire. A character with a love for the booze, his massive moustache and packing a dual Smith & Wesson .44 caliber revolver, he’s a kick-ass Marshal like in the movies! 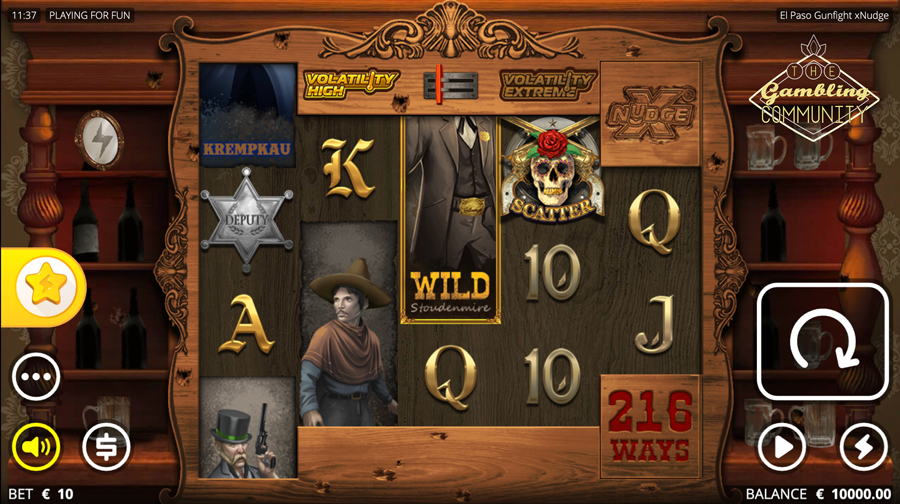 El Paso Gunfight is a five reel slot that has a revolving reel area of either 23334 or 43332 symbols depending on what volatility you prefer.

It’s similar to changing the formation of a football team, you have the same amount of symbols/players just in a reverse formation, this increases or decreases the volatility and overall RTP depending what you prefer, it’s incredibly innovative yet so simple!

El Paso utilises NoLimits xNudge mechanics which is a very simple but effective addition to any game and if xNudge Wilds wasn’t enough, then this is the game for you as with all the features counted up it would appear it packs more than a sixshooter has bullets!

You’ve seen these before – Wilds that nudges in and award a multiplier range from x1 to x3 and increase with each nudge. Stoudenmire xNudge Wilds will be upgraded in the bonus modes if landing on a reel with a Jumping Wild, and also stick in the Drunken Gundfiguth&r… Spins!

It’s these Wild’s that enable the maximum “6 foot under” win of 44,400x stake as you’ll see at the end of the review! 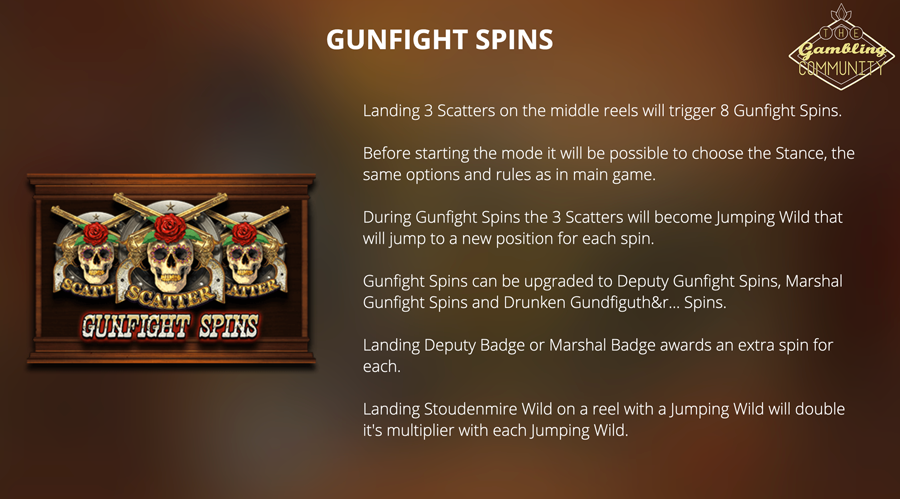 Next we have Gunfight Spins, to trigger these you need to land the 3 skull scatters on the middle reels, this triggers 8 free spins.

The 3 scatters then turn into Jumping Wilds and will move across the reels during the 8 Gunfight Spins. These can be upgraded by landing any badge or even both badges.

Next we have the Deputy and Marshall Raid, this is triggered by landing either of the Sheriff or Deputy badges and will turn the low symbols and the premium symbols into one randomly chosen symbol respectively. 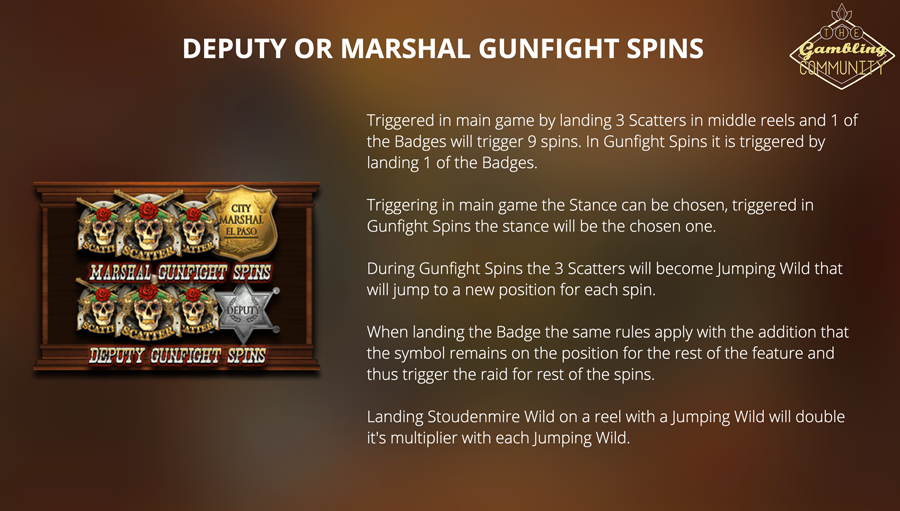 Deputy or Marshall Gunfight Spins is basically the 2 bonuses blended into one and this makes for a very potent mix! To open this feature you need 3 scatters plus any of the two badges. 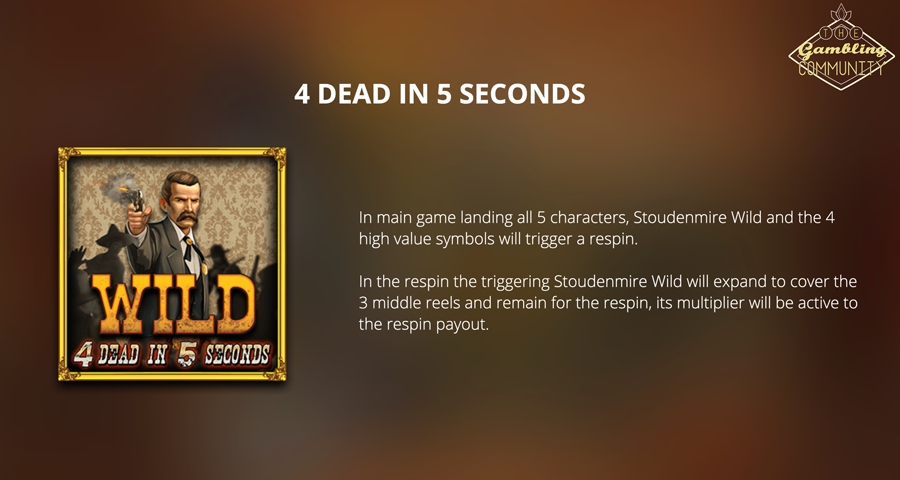 This next feature in El Paso Gunfight is one of my favourites as its so simple but has great potential. Simply land all five characters in the main game including Dallas Stoudenmire and trigger a respin where the Wild expands to cover all three middle reels in a huge square, think of the x256 block in Final Countdown and you’re not far off. 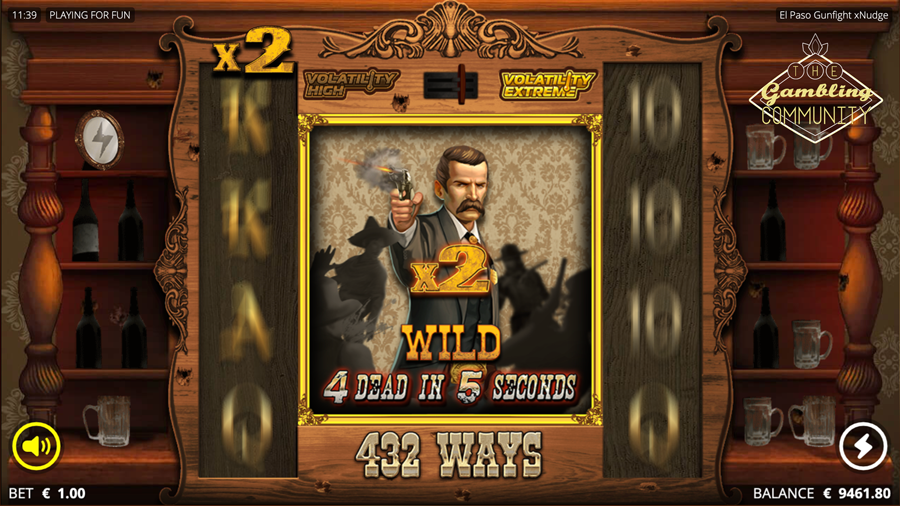 Finally we have the bonus that has paid the 44,440x stake maximum several times already! It’s called Drunken Gundfiguth&r… Spins and this is where the insanity happens! 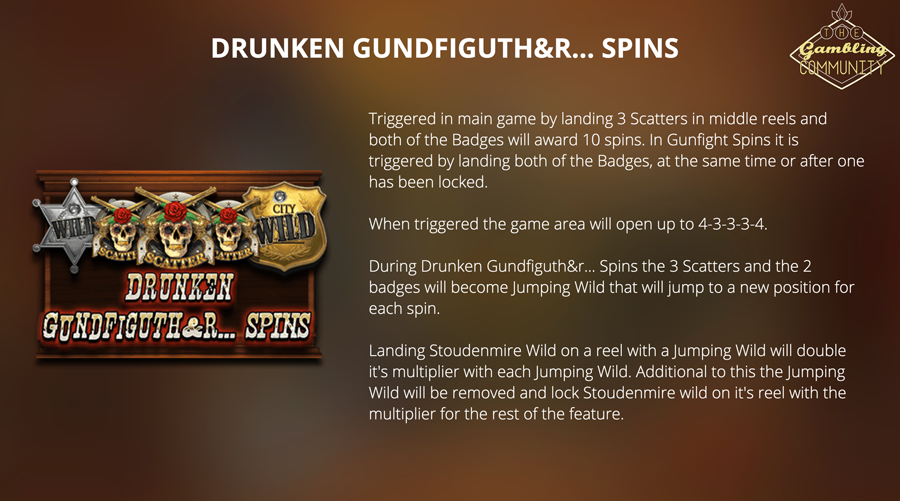 Simply land 3 scatters and both badges to trigger 10 spins on a 43334 reel area with 5 Jumping Wilds and massive payouts and a massive Western shootout!

Now moving on to the premium symbols we have the Bystander paying 2x for a full way, Hale pays 2.4x stake, Krempkau in the Blue pays 3.20x stake and Campbell pays 6x stake.

These amounts may seem paltry but there are so many ways and multipliers going on that it soon adds up to some pretty respectable and sometimes incredible bonus rounds. 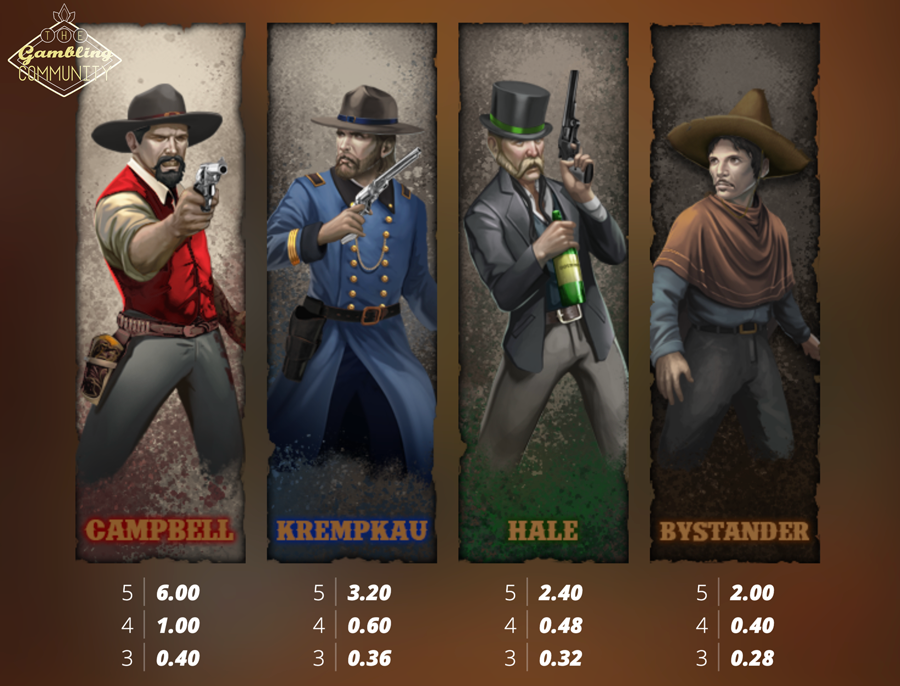 El Paso Gunfight xWays has an RTP of 96.05% and No Limitcity list the game as Extreme volatility which is there maximum, I would also agree with this as the hit rate is around 28% and with a maximum capped win of 44,440x stake it ticks all the boxes for super high variance. 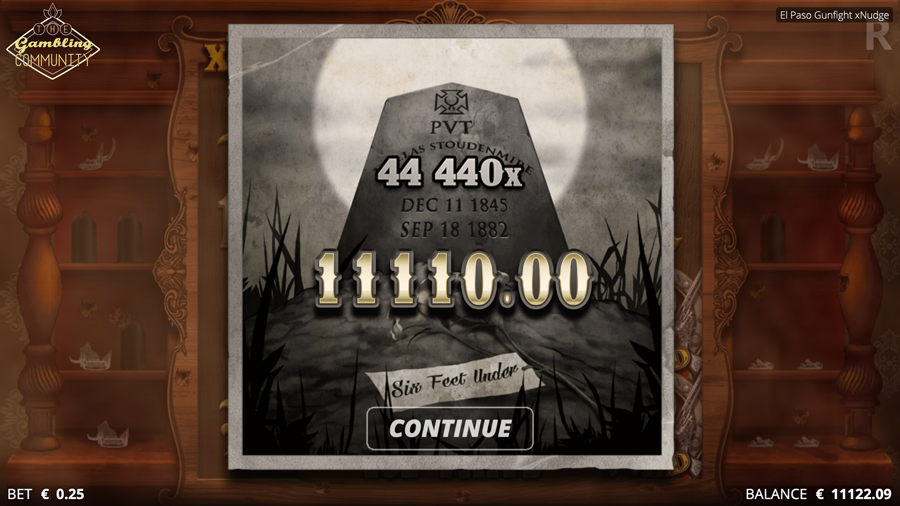 The graphics, sounds and animations in El Paso Gunfight do not disappoint and meet the same standard I’ve come to expect from other amazing slots from NoLimit City, they really do seem to be setting the bar and for anyone wondering how there soundtracks are so good, they have there own record label!

Overall I prefer this to the older cowboy games like Dead or Alive as it has a lot more features to keep you entertained and lots of hidden easter eggs, I particularly like the cowboy going for a pee in the big win sequence! If you’re curious there’s a link below to the max win, you’ll see the cowboy mentioned!