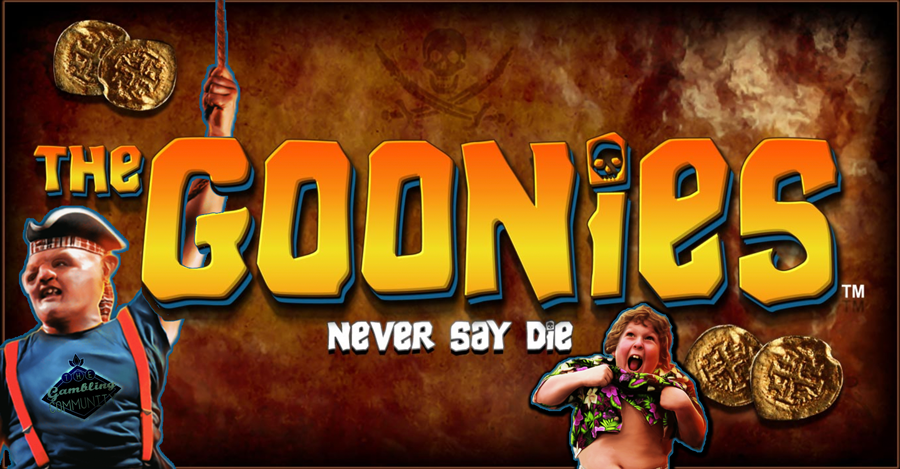 Overview Of The Goonies

Today were going to look at the latest game from Blueprint, The Goonies, this film is a classic from 1985 and one of my personal favourites of all time as it reminds me of the 80’s, this film for anyone that hasn’t seen it is an absolute must watch, it was produced and directed by Steven Speilberg in the Indiana Jones era and it’s based around a group of youngsters that set off on a treasure hunting adventure to save there home, armed only with a treasure map they set off in pursuit of a pirates loot and have a huge adventure along the way as they cross paths with a wanted criminal family called the Fratelli’s and there estranged son Sloth!

The Goonies is a 5 reel by 3 row slot with 20 fixed pay lines, the game is packed with features both in the base game and the bonus round, all in all there are no less than 14 features, 6 base game, 6 bonus and 2 random modifiers that can occur at any time! To begin with we’ll take a look at the base game features that can occur any time, similar to TED waking up or the fairy flying out in Wish Upon A Jackpot. 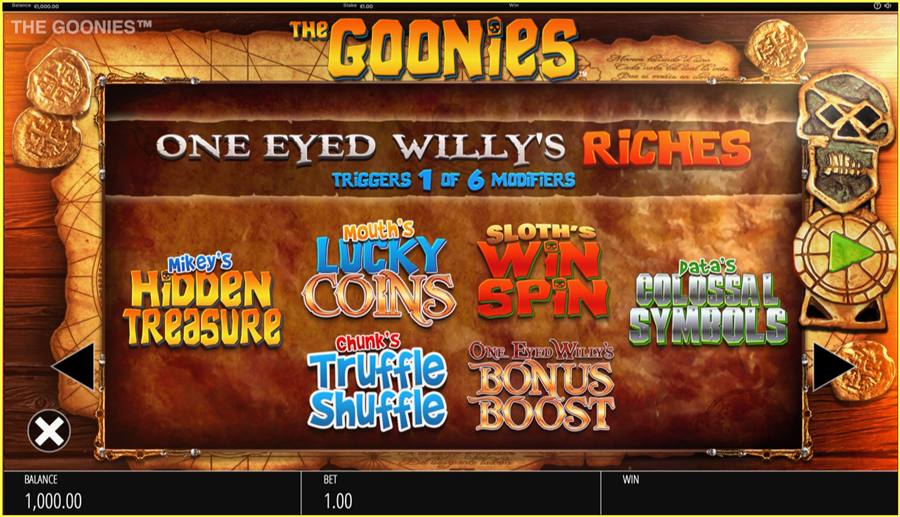 Below is an example of the Truffle Shuffle Wilds

3 or more scatter’s unlocks one eyed Willy’s bonus where you spin a wheel to choose from 6 different outcomes, you can then choose to collect or gamble for a better feature but be careful as the booby prize is just a mystery coin win! 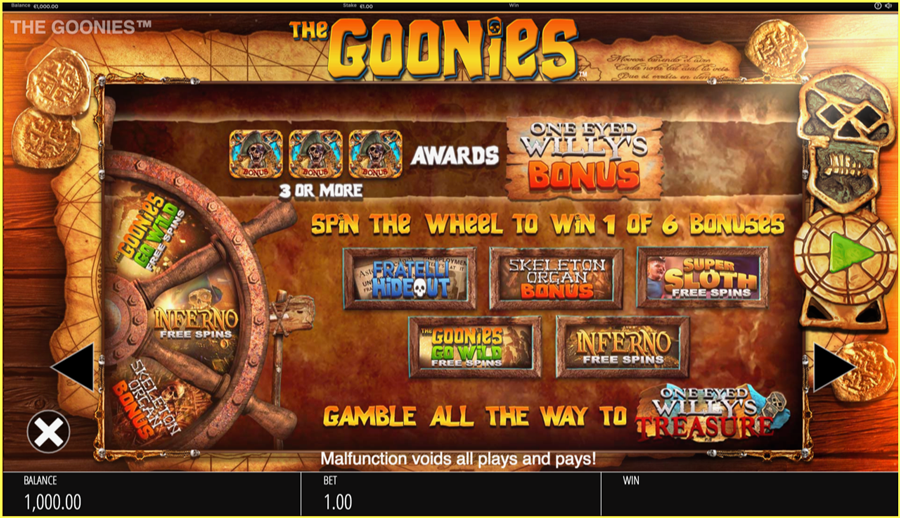 Let’s take a look at the different bonuses and there unique features below.

Skeleton Organ Bonus
The player selects the organ keys to reveal an icon. Each character will match up to a total bet multiplier. Additionally, revealing an UPGRADE icon will upgrade the total bet multipliers or the possible feature that can be won during the bonus. Collecting 3 Key symbols unlocks the door to an additional feature bonus. Watch out for the Skull and Crossbones. LOSE 3 LIVES AND IT’S GAME OVER!

Super Sloth Free Spins
A screen transition will occur and the player will be taken to a new set of reels featuring the Fratelli family. During any spin, if a Super Sloth Wild lands in view any Fratelli symbols on the reels are turned into the top symbol. At the end of Free Spins the player has one extra chance to win extra prizes. Choosing a chest reveals either Super Sloth (extra Spins), Collect (ends the feature) or One-Eyed Willy’s Treasure Bonus (awards the feature).

At the start of each spin after spin number 1, one of the top reel symbols will become Wild. At the end of Free Spins the player has one extra chance to win extra prizes. Picking one of the Copperpot Doubloons will reveal either COLLECT (ends feature), EXTRA SPINS or One-Eyed Willy’s Treasure (awards that feature). If the player reveals EXTRA SPINS then they are awarded up to 5 extra spins with all of the Goonies symbols wild.

At the start of each spin the Inferno will move across the reels from right to left, turning between 1 and 3 consecutive reels Wild. At the end of Free Spins the player has one extra chance to win extra prizes. Spinning the wheel will reveal either COLLECT (ends feature), EXTRA SPINS or One-Eyed Willy’s Treasure (awards that feature). If the player reveals EXTRA SPINS then the feature is re-triggered.

Collecting 5 Bonus symbols, gambling to, or having landed on the One-Eyed Willy’s Treasure Bonus on the Bonus Wheel triggers the One-Eyed Willy’s Treasure Bonus. The values will spin and then come to a stop awarding the corresponding total bet multiplier. The feature continues until the booby trap is triggered on the scales, where the player is awarded their total bet multiplier win.

The paytable in The Goonies is based on amount of coins won and indicates your line bet at the bottom of the screen so you know what to multiply, starting at the bottom we have the J’s and Q’s that pay 2.5x for a full line, the K’s and A’s pay double that at 5x, the gold scales and green skull double that again at 10x for 5 of a kind, the treasure chest and pirate ship pay 15x and the best symbol of all, the Jolly Roger pay’s 25x per line and it’s stacked on every reel meaning you could get a full screen which would pay 500x your bet! The max win in any bonus is apparently capped at 10’000x but then Genie Jackpot Megaways claims the same and Iv since seen a win of 21’000x so that maybe only applicable if you’re playing on the maximum stake. 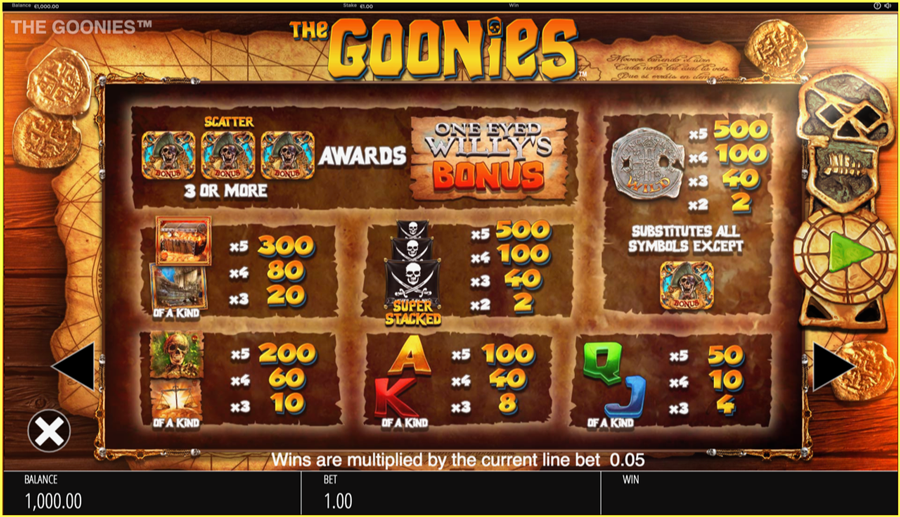 Final Thoughts On The Goonies

The Goonies has an RTP of 96% and I would class it as the higher end of medium variance, the graphics and sounds are fantastic and Iv noticed that Blueprint are really stepping up there game with there recent releases, the tiny details in everything are really noticeable and enhance the playing experience dramatically. This is definitely a game that I will play in the future and if you fancy being a Goonie theres a link below to a TGC tested and approved casino, theres now only one more thing to say, HEY YOU GUYS!