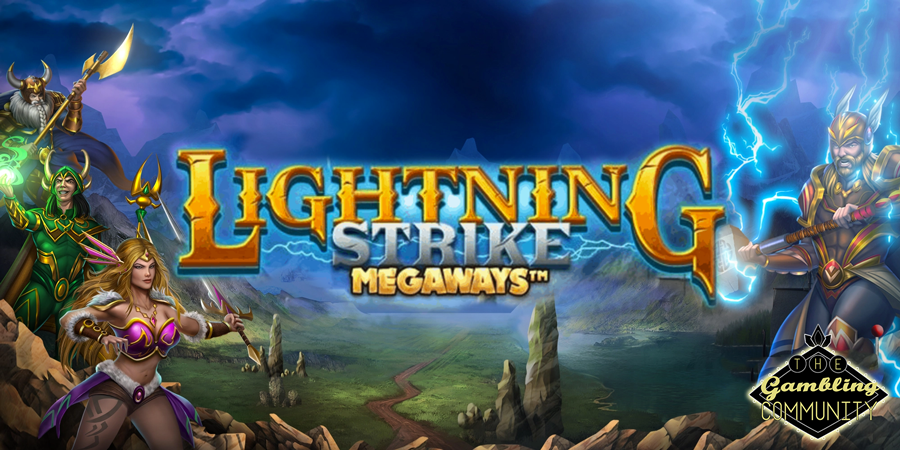 Lightning Strike is another new offering from Blueprint utilising the licensed Megaways engine from BTG. Blueprint have been seriously raising the bar whilst simultaneously releasing more new slots than any other provider I can think of this year and that’s quite a feat, they’ve realised us slotter’s love the Megaways games and so there churning out some really nice themes and nice tweaks to the maths models to make each slot individual and this Norse mythology game has a pie gamble and a unique way to get into the bonus so thats enough to get my interest, lets take a look!

Lightning Megaways is a an all ways pay slot and has a 6 reel by up to 5 row setup giving you up to 15,625 ways to win, basically exactly the same as Bonanza or Extra Chilli but less ways. During the base game there are a couple of random feature’s, first off we have the mystery gold tree symbols which can land on any reel and all in view vanish to reveal the same symbol, think of the TNT symbols in Diamond Mine, it’s exactly the same.

The second base game feature is the wild multiplier hammers which can land on the middle 4 reel’s, each time one lands you get paid for that spin with the multiplier and get a re-spin, this can lead you to have all 4 wild hammers and each one has a multiplier of between 2x and 5x, you get a few 5x multipliers and you have some serious potential as you can imagine! If you look at the image below you’ll see it still has a win of 3500x my stake showing, this was from a 4 hammer feature I forced using the dev tools, not bad I think you’ll agree! 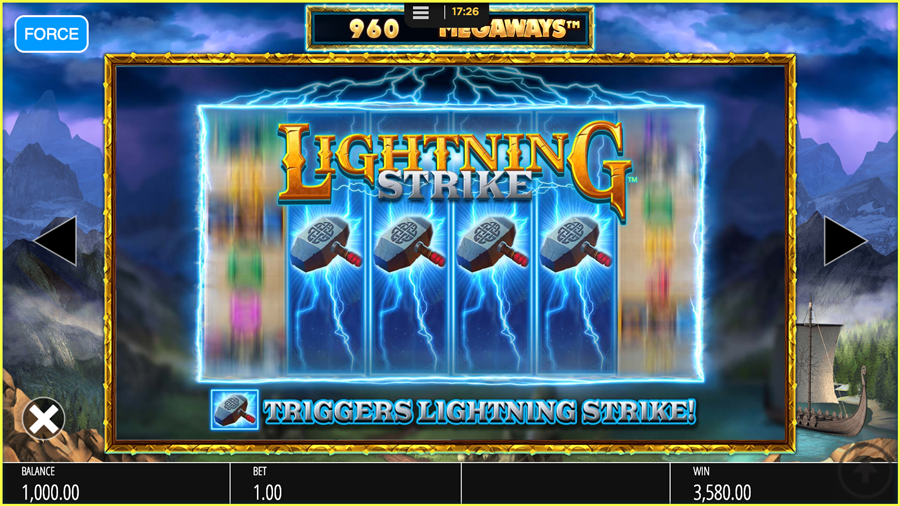 Now we have an understanding of the base game, let’s look at the feature, this is very unique as you don’t need scatters to unlock the free spins, you need a win of 5x your stake or more, this then takes you to the pie gamble screen where you can gamble your way up to 25 Mega Spins or 125x your stake, you can collect at any time after your first successful gamble. 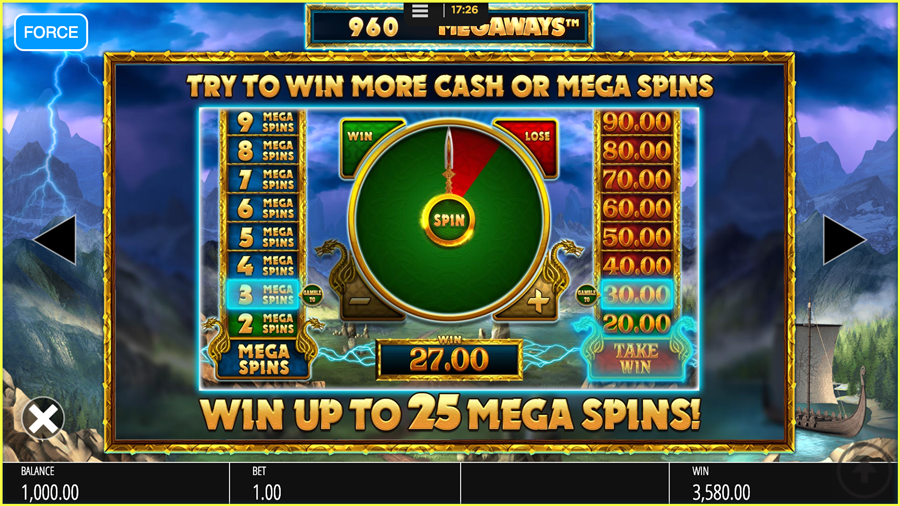 Below you can see where I gambled all the way to the top and decided to take the Mega Spins where you’re promised more wild hammers and more mystery symbols, the end result was 240x my stake which is nearly double the top cash prize, I also had some occasions where the 25 spins gave me less than 125x, this is all part of the super high variance Lightning Strike has, let’s move onto the paytable. 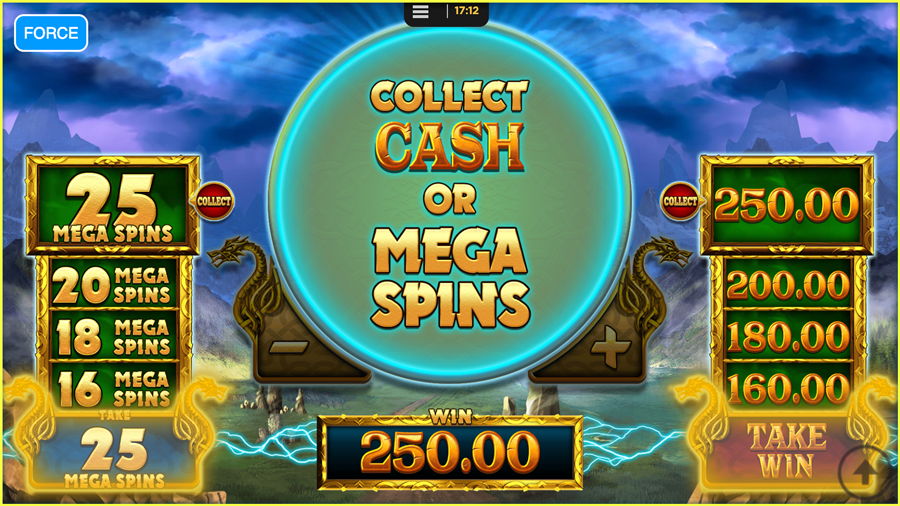 The paytable in Lightning Strike is straight forward and to the point, the amounts are simply put as multiples of your stake which I’m a fan of. The 9’s, 10’s, J’s and Q’s all pay 1x your stake for 6 of a kind, the K’s and A’s pay slightly more at 1.5x.

Moving on to the premium symbols we have Valkyrie in the pink and Loki in green paying 2x, Thor in the red pays 10x and the top symbol of the game The Mighty Asgard pays a whopping 50x your stake per way, get him either end of a few hammers and you’re going to have a huge win on your hands! 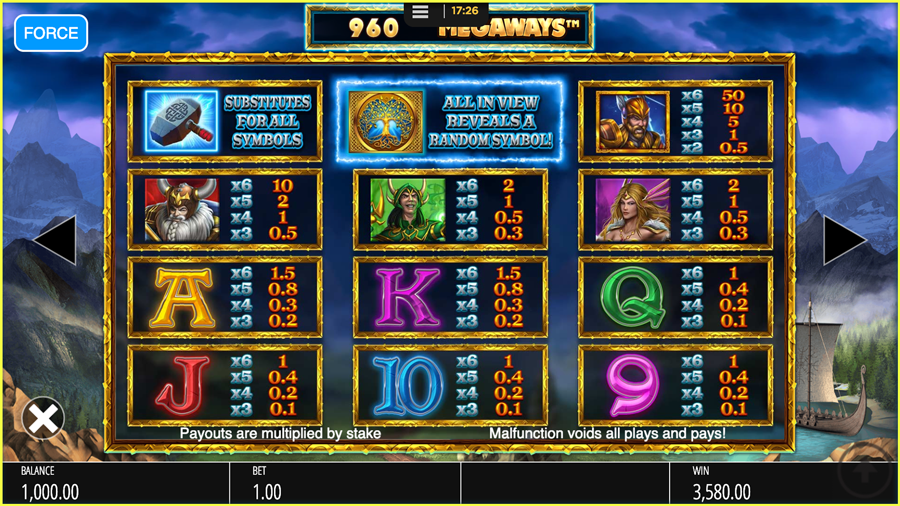 The image below shows the outcome from a hammer re-spin where i got 486 ways of Jacks which paid 513x and this was in the base game! 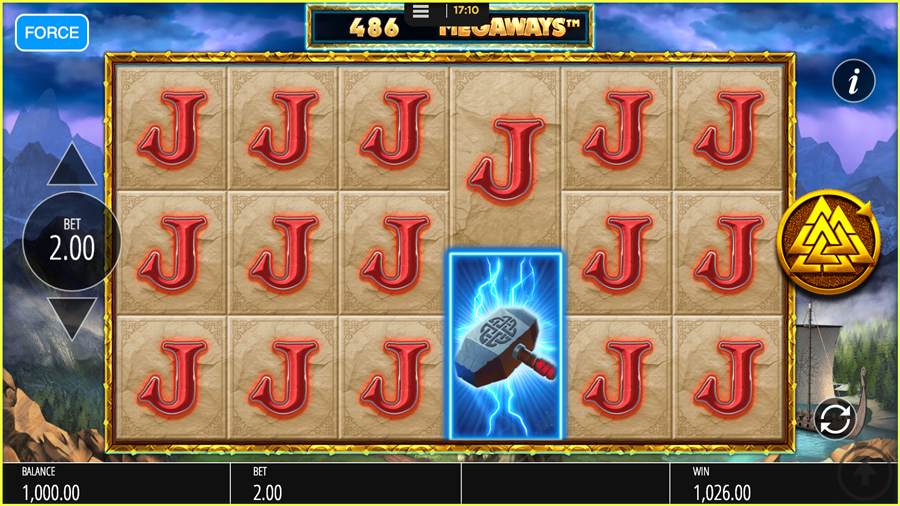 Lightning Strike has an RTP of 96.50% and the maximum win is capped at 50,000x your stake or £250’000, whichever you reach first which confirms this slot is an ultra high variance game and you should bear that in mind if you have a bad session on it! It’s definitely going to go into my list of games I play as i like the pie gamble entry to the feature, I must also say the sound effects and graphic effects with the shaking screen and big bangs and crashes as the hammers land was very exciting and enjoyable to play.

If you fancy giving it a go theres a link below to a TGC approved casino and as always thanks for reading.