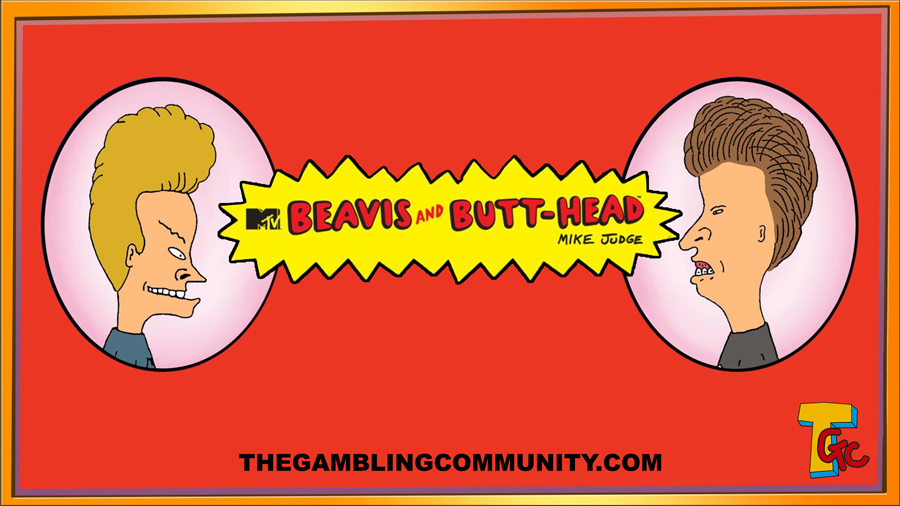 Overview Of Beavis And Butt-Head

Blueprint’s latest offering is based on the classic 1990’s MTV show Beavis And Butt-Head, now I wasn’t lucky enough to have MTV as a teen so I didn’t actually get to watch this show but I gather that its based on a pair of couch potato teen delinquents that giggle and criticise the world around them mixed with a generous dose of adult humour from the writer Mike Judge, I’ve seen this slot requested for years and now it finally exists so lets see if its any good!

First of all we have the Die Fly, Die! Feature where Beavis And Butt-Head start swatting flys on the reels, these then turn to wilds and any win is awarded. Nice and simple. 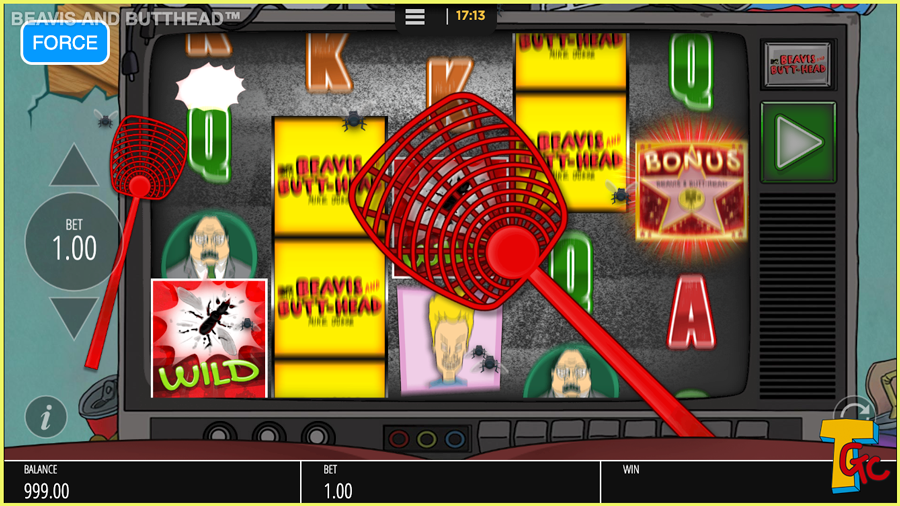 The second mini feature is called Cornholio Wilds – during this feature Beavis can turn any amount of reels into a full wild reel, this is like the Mikey feature in The Goonies. 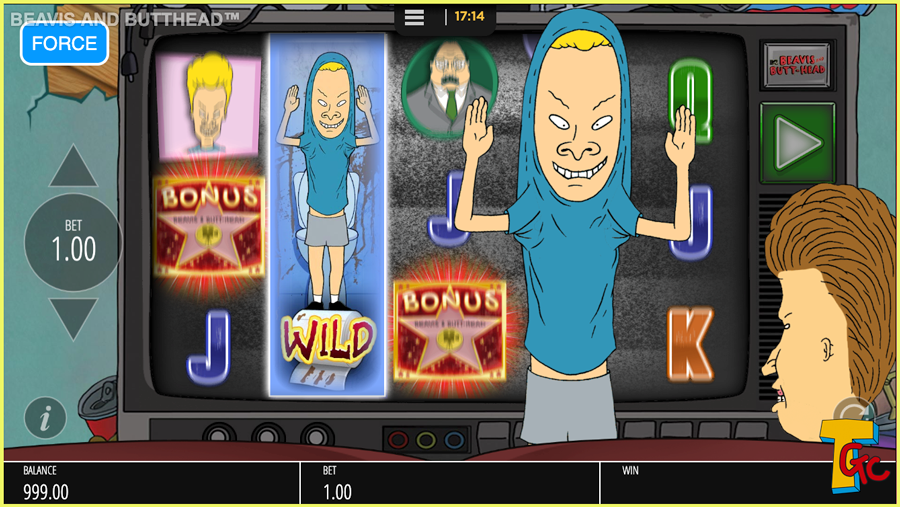 The next feature is called Colossal Couch Fishing – As the reels continue to spin, 3 adjacent reels can be turned into a Colossal Reel exactly the same as in Ted or The Goonies, you can also get a colossal bonus symbol to enter the main feature. 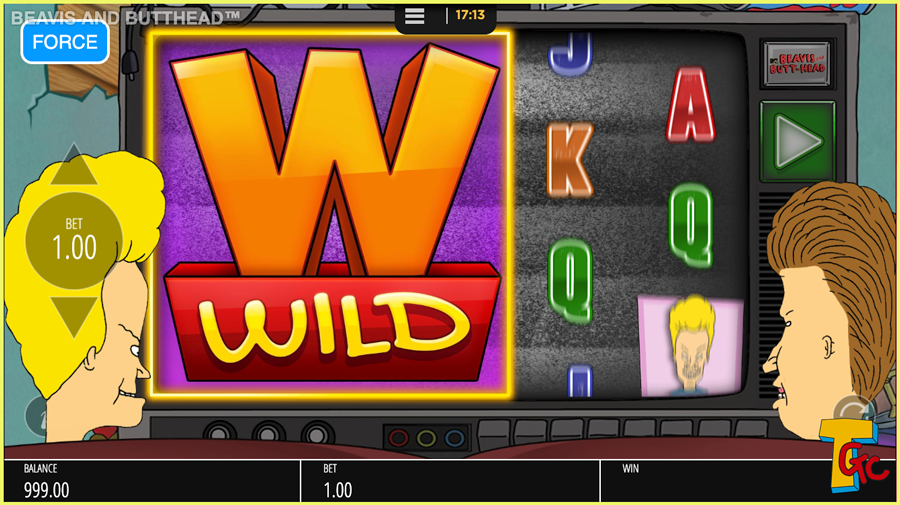 The next feature is called So Nacho and during any spin Butt-Head opens a bag of Nachos and they fly everywhere, some stick to the reels and once the feature is finished they all reveal the same symbol and the win is awarded. 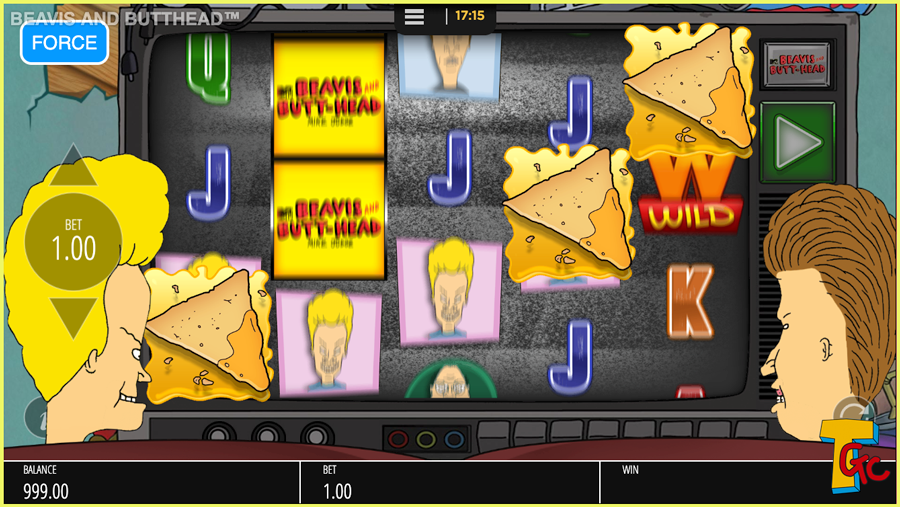 The Butt Flambé feature can be combined within another feature and when it activates Beavis will drink some hot sauce and fart at the reels adding extra bonus scatters, every time this feature triggered I did end up with at least 3 scatters but of course thats not guaranteed. 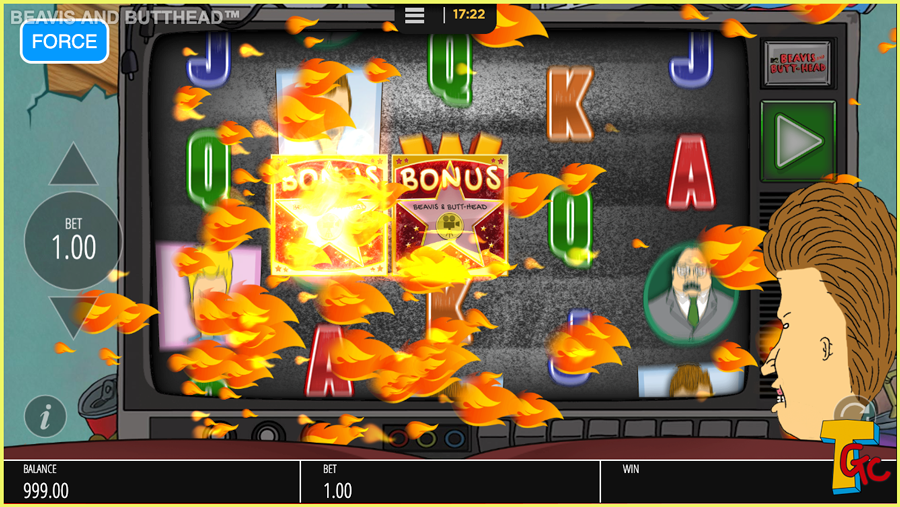 The final in game feature is called Some Like It Hot and during this feature Beavis And Butt-Head both drink a bottle of hot sauce and spit fire at the screen to guarantee you a big win, in the example below you see the best outcome from this feature being a full screen of the top symbol for 500x stake! 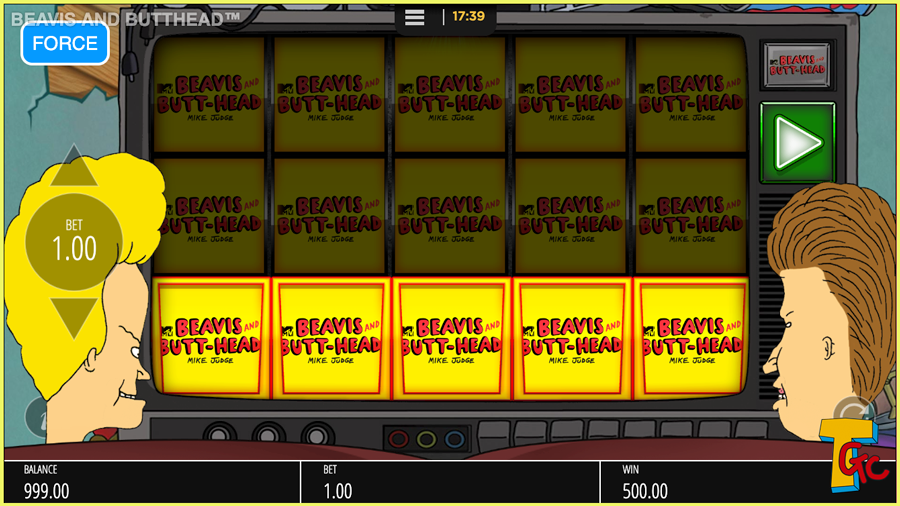 There are also two additional modifiers which can trigger after any spin where symbols are knocked out from the reels and new ones fall down to create a win or Butt-Head can change the channel to reveal a win on the reels. Now we have the base game features out the way we can take a look at the main feature available for landing 3 or more scatter symbols.

Once you have 3 or more scatters you are taken to a selection screen where you pick a card, this card tells you what feature you’ve won, you can accept the feature offered or gamble for a better one, we will start with the lowest feature first which is Don’t Be A Buzzkill.

You trigger this feature by revealing Don’t Be A Buzzkill during the Bonus selection and all you have to do is simply pick Beavis or Butt-Head to reveal one of the following outcomes: CASH ADD (adds a cash amount based on the player’s total bet); BUZZKILL (increments the Kill-O-Meter. Filling the meter ends the feature).

If the loud speaker animates to make an announcement then the player can trigger any one of the 5 additional Bonuses! 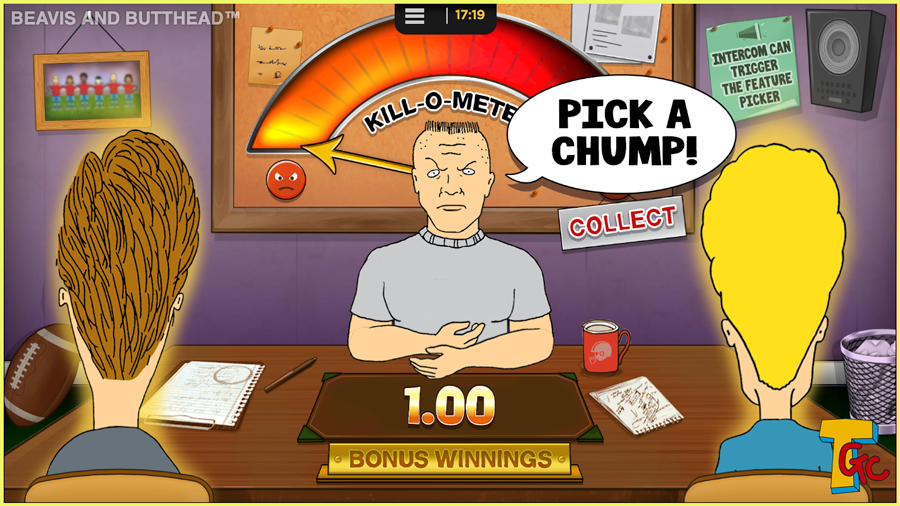 The next feature is called Customers Suck! The player selects a food box to reveal an icon. Each type of food will match up to a total bet multiplier. Additionally, revealing the UPGRADE icon will upgrade the total bet multipliers or the possible feature that can be won during the bonus. Collecting Gold Super Burgers unlocks an additional feature bonus where you can enter a better feature. Watch out for the not so special Beavis and Butthead Worm burgers, reveal 3 of these and it ends the feature! 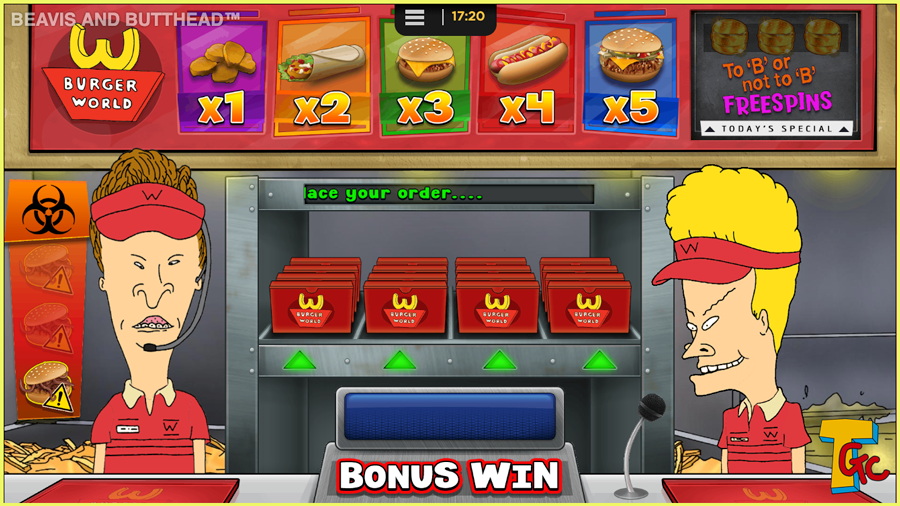 The next feature is called To ‘B’ Or Not to ‘B’ Free Spins and on every spin either the Beavis or Butt-Head symbol will be turned into a wild. Additionally, there will also be overlays which can appear on any reel and the player has to accumulate a number of overlays to win one of the following:

Super Spins – All Beavis & Butthead Are Wild On Every Spin. 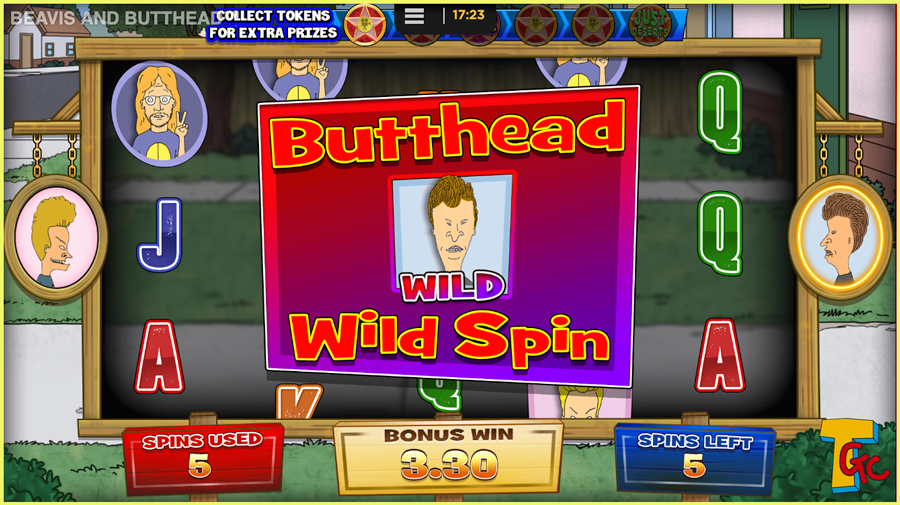 Additionally, there will also be overlays which can appear on any reel and the player has to accumulate a number of overlays to win one of the following: 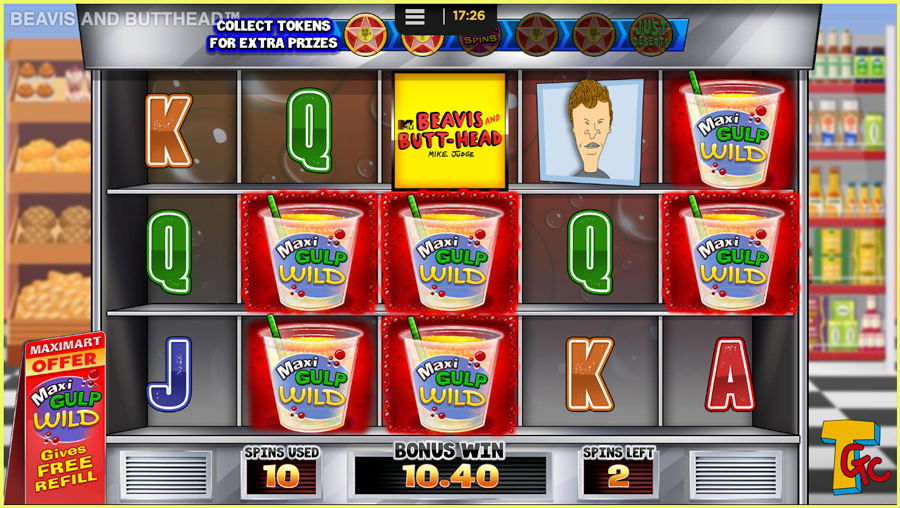 The final feature before the Big Money one is called Super Cornholio Free Spins and during each spin Cornholio can appear from any toilet cubicle, turning reels into full wilds. Additionally, there will also be overlays which can appear on any reel and the player has to accumulate a number of overlays to win one of the following:

Extra Spins – this re-triggers the free spins as a one time only event. 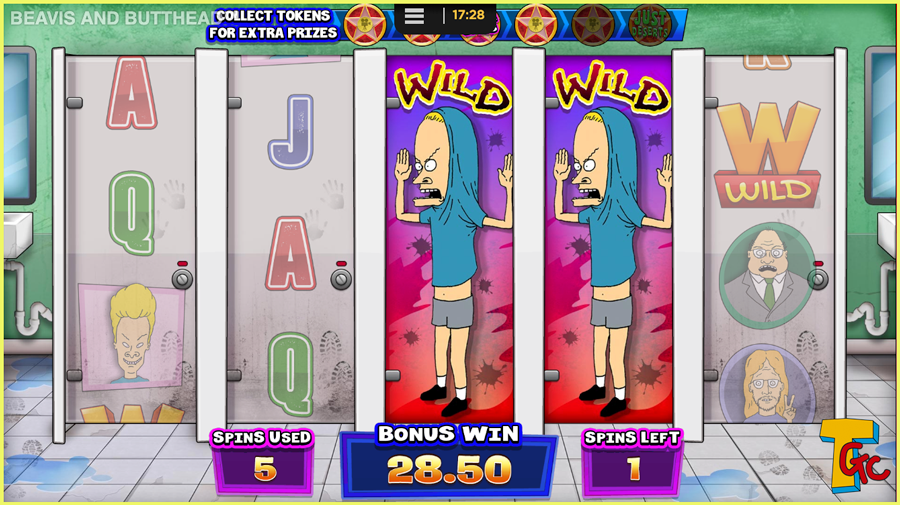 During the bonus you pick an icon to advance the pair along the desert trail and accumulate cash wins. Landing on an Oasis position will award a mystery outcome. Make it to Super Big Money at the end of the trail to pick a Super Big Money Multiplier which is added to your feature total. 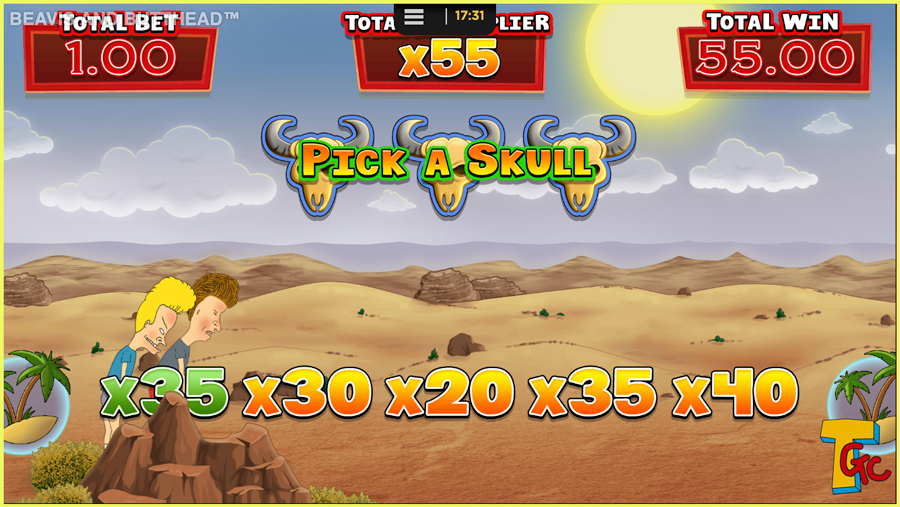 During the Just Desert’s Bonus you can also reveal a campfire under any of the mystery oasis symbols and this takes you to the Super Big Money round where you have to select one character from the campfire, I was already at 160x my stake and selected the top right chap who was hiding 290x, this gave me a total of 450x my stake which is very respectable for such a feature heavy game. 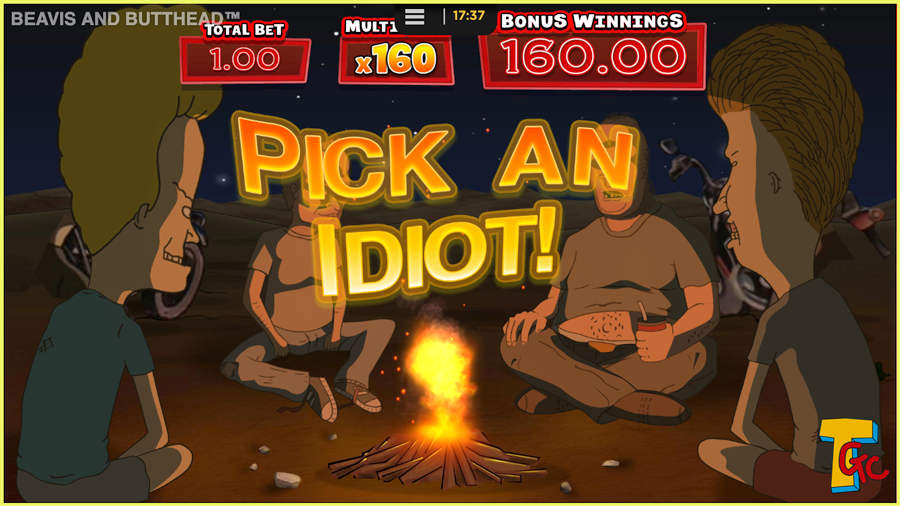 The paytable in Beavis And Butt-Head is based on coin value per line which is indicated at the bottom of the screen. Starting with the lowest symbols we have the J’s and Q’s paying 2.5x for 5 of a kind, the K’s and A’s pay 5x, the 2 guys at the bottom left pay double this at 10x for a full line, Beavis or Butt-Head pay 15x and the yellow logo pays the most at 25x per full line which is the same as the Wild, this symbol is also stacked so you can get a full screen as shown earlier for 500x your stake! 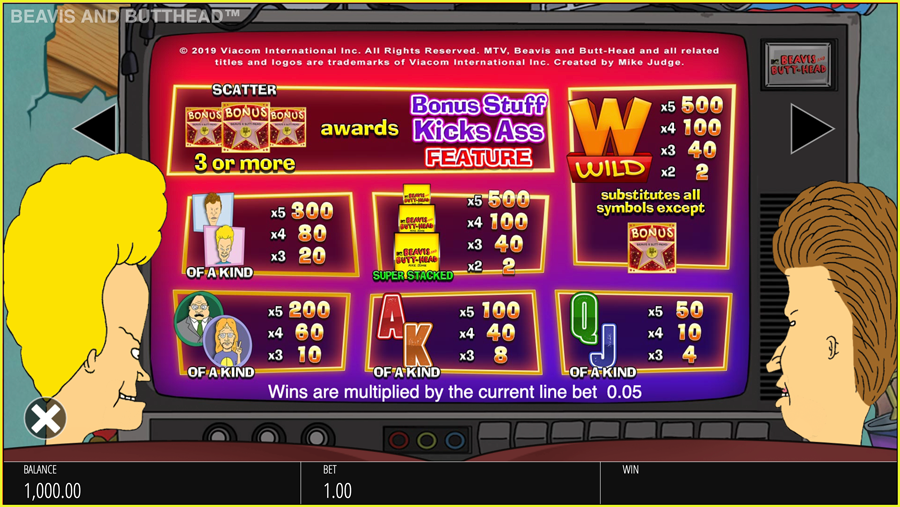 Final Thoughts On Beavis And Butt-Head

Beavis And Butt-Head has an RTP of 95.49% and I’d class it as the higher end of medium variance with it’s feature packed base game it plays very similar to other titles from Blueprint like Ted and The Goonies. The graphics and soundtrack are really good and although I’ve not watched this show before it was great fun to play even though we’re no strangers to this format of slot Blueprint have managed to do it again and this will be added to my list of games I will play, possibly for wagering a bonus. As always thanks for reading and if you fancy trying it out for yourself theres a link below to a TGC trusted casino, good luck!