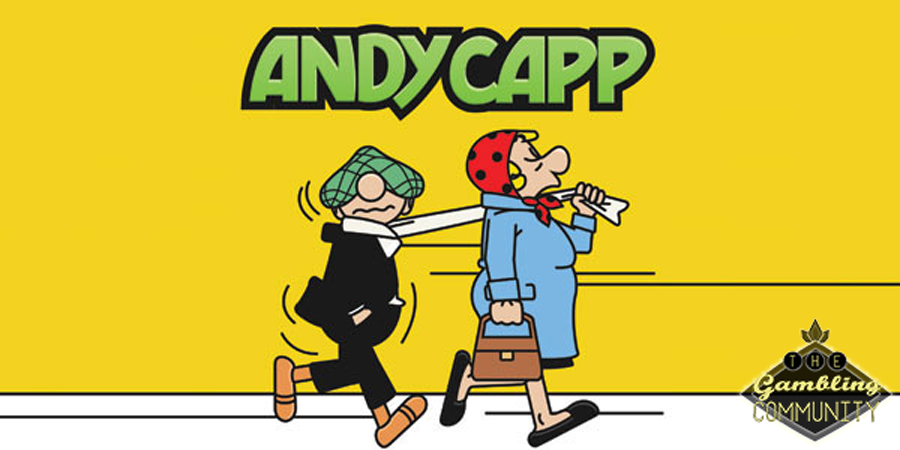 Were off to Hartlepool for this next slot review, so get your rocknrolla flat cap on, grab your darts and snooker cue and don’t let Flo catch you cause were off to the Jolly Riveter pub for a few tongue wetter’s and a game with the lads! Andy Capp is the latest addition to Blueprints slot portfolio and I was keen to try it as I was a big fan of the Andy Capp fruit machine when I was a teen.

For anybody not familiar with Andy, he is a hapless chap who likes to drink, gamble and fight 7 days a week while trying to avoid the rath of his dearly beloved wife Flo who is often depicted chasing him with a rolling pin!

Andy Capp uses the same mechanics as some of the other well known slots like TED, Jungle Jackpots and Genie Jackpots without being a complete re skinned clone. It has 20 paylines with an RTP of 92.7% and 0.13% going towards the progressive jackpot giving it an overall RTP of 92.83%, which is on the low side compared to the usual 96-97% that us players are accustomed to.

It has 3 in game features as shown below and also a random scratch card feature that appears where you match 3 symbols for a bonus entry, cash amount or entry to the jackpot feature! Theres also an enhanced reels feature with only the top symbol and blanks with flo on that can happen randomly on any spin. 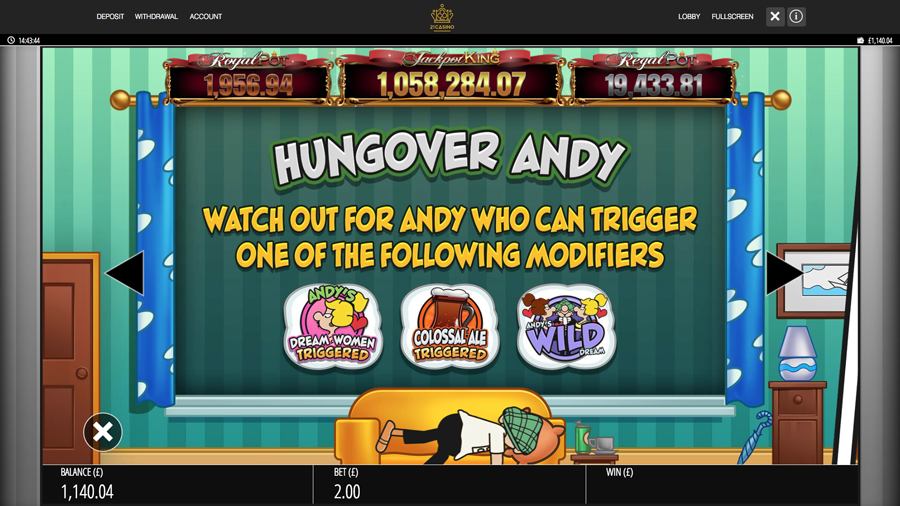 3 scatters gets you into the bonus where you are randomly awarded one of the features below, the lowest feature being the darts where you get 3 random throws and can win up to 180x your stake. The back to the bookies feature is a pick bonus where you choose rosettes and try to avoid the collect symbol that will end the feature, you can choose 3 options before you pick to have more collect symbols but higher multipliers, basically a low, medium and high variance of the same feature.

On me head son is a sticky wild freespin round where each spin a football is headed by Andy and if it hits any of the 15 spaces on the reels a wild sticks to the end, the referee randomly awards Andy fouls and after 3 the feature ends, until you get 3 fouls the spins are unlimited.

The boozer feature is a 10 freespin round where you collect wilds over each spin then at the end all the wilds that have been collected are put back on the reels for 1 super spin, you then get to pick a beer tap where you get another re spin or collect your winnings.

Last but not least is the equivalent of the big money bonus we all want called the jolly riveter super bonus, you play through a super spin collecting the top paying Andy Capp symbols. Each time you collect one it increases your big money multiplier, you also pick beer taps to see if you get another respin or the dreaded collect! 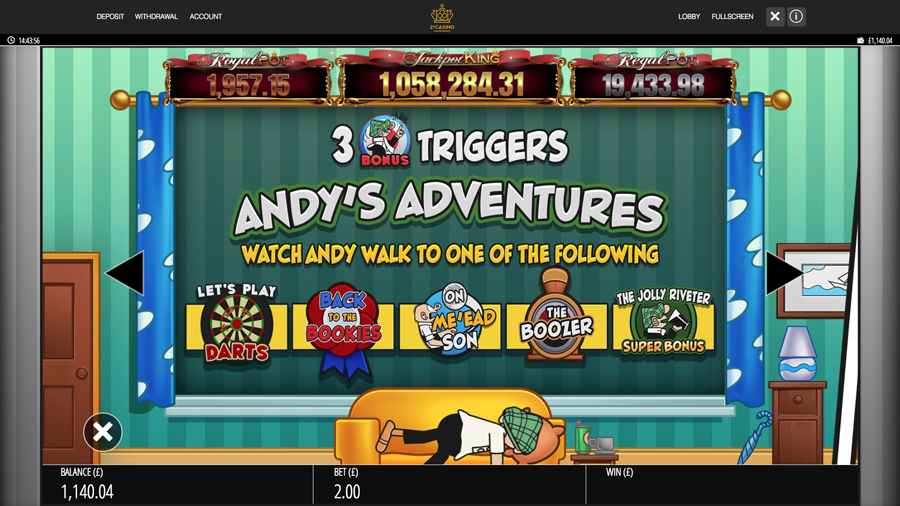 The lowest symbol in this game pays just 2x your stake for 5 of a kind, the top Andy Capp symbol pays 25x and as they are stacked you have the potential to land a full screen which would pay 500x. It’s worth noting that while I tested this slot I actually won 500x my stake on the middle bonus with the sticky wilds so it can pay even though its never going to deliver more than a 1000x unless you win one of the progressive jackpots. 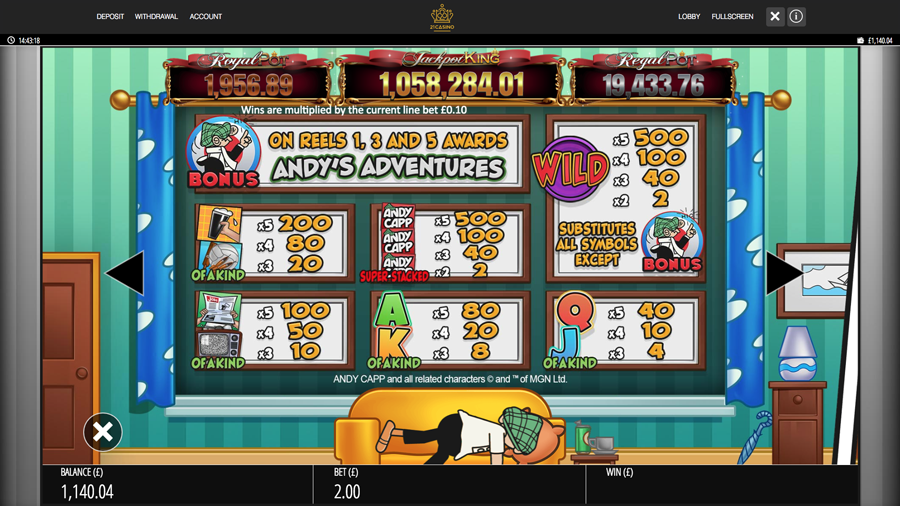 I enjoyed playing this about as much as I enjoy playing TED, its a bit of fun and the theme is funny and even with a fairly low RTP it seemed to keep me going for a good while without destroying my balance. I would say if you are a fan of the other blueprint slots you will enjoy this just as much. I’ll stick a picture of my win below for anyone who’s not witnessed a 500x blueprint win! Thanks for reading and good luck as always with your bets! 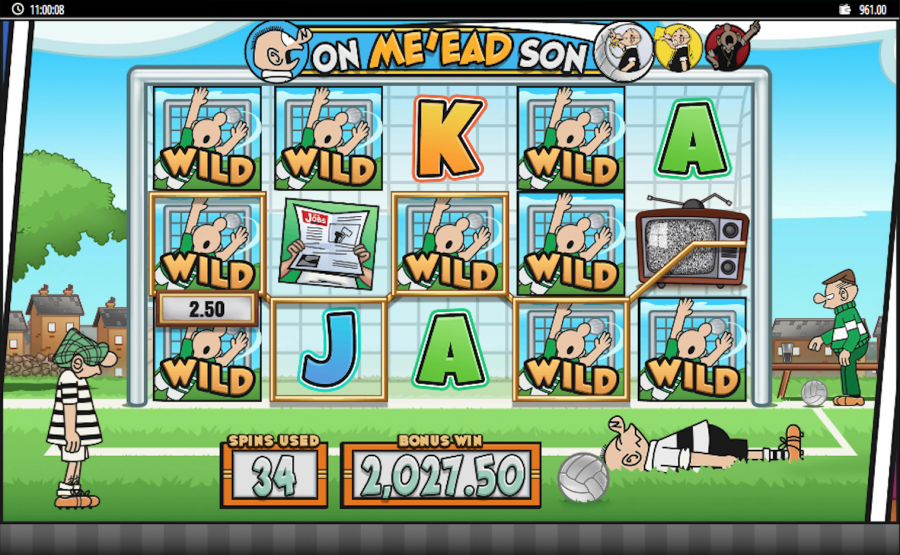 I’ve played for real quite a bit, and the nearest I seemed to get to a feature was Andy dreaming of flo – then nothing happened! Really poor returns, it just spins off your cash with tiny line wins and that’s it

nice review, recently hit the top bonus only paid 90 x a bit disappointing and the on me ead son one has paid horrendous for me when I hit so great to see a bit win as above!