Money Train is the latest release from Relax Gaming, the theme is Western, the mechanics are simple and the providers boast it can pay 20’000x your stake, will that be enough to interest us players? Let’s saddle up and take her for a ride and see, yee-haw! 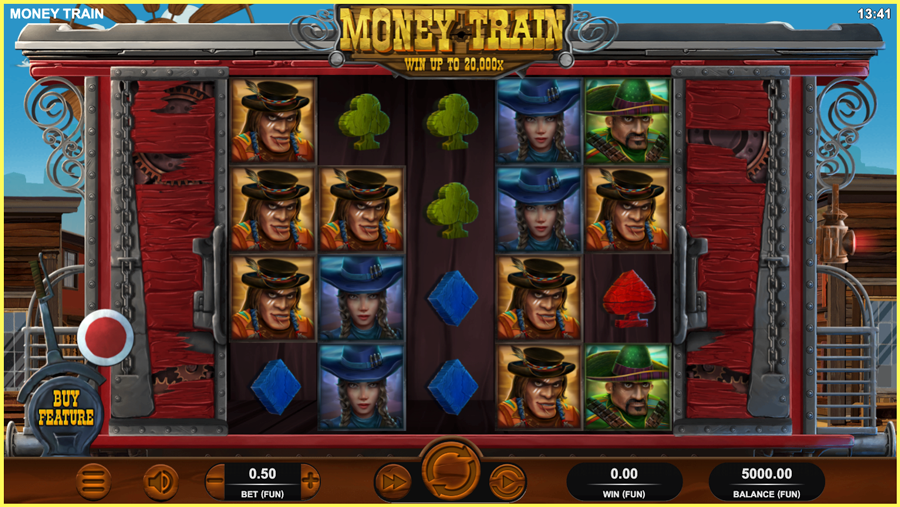 Money Train has a 5 reel by 4 row layout and you play on 40 fixed pay lines, the game has 1 bonus round and you trigger this by landing a scatter on reels 1, 3 and 5 or you can purchase the bonus for 80x your stake. Once the bonus round starts the three scatters that trigger the feature will reveal a value which is displayed as a multiplication of your bet and awards 3 spins. 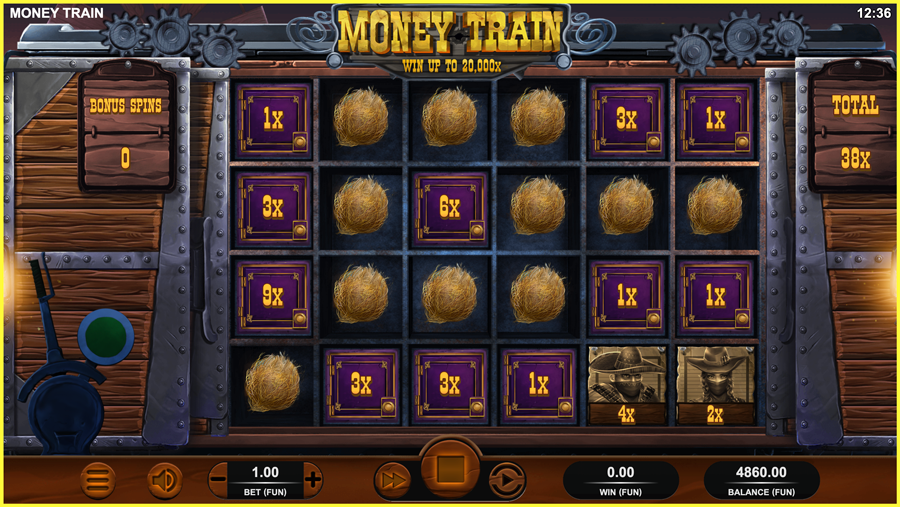 During the bonus round it’s possible to land additional symbols so lets take a look at these and what they do.

First of all we have the PAYER, this female cowgirl reveals a value as a multiplication of your bet and adds it to all other visible symbols on the reels

Next we have the WIDENER, this Mexican cowboy reveals a value as a multiplication of your bet and opens an additional reel

Then we have the COLLECTOR, this Apache Indian reveals a value as multiplication of bet and then collects all visible values on the reels and add them to its own value, this can be super valuable if you get it several times in one bonus. Next we will take a look at the GOLD symbols, these are super rare but add every spin, lets take a look at them. 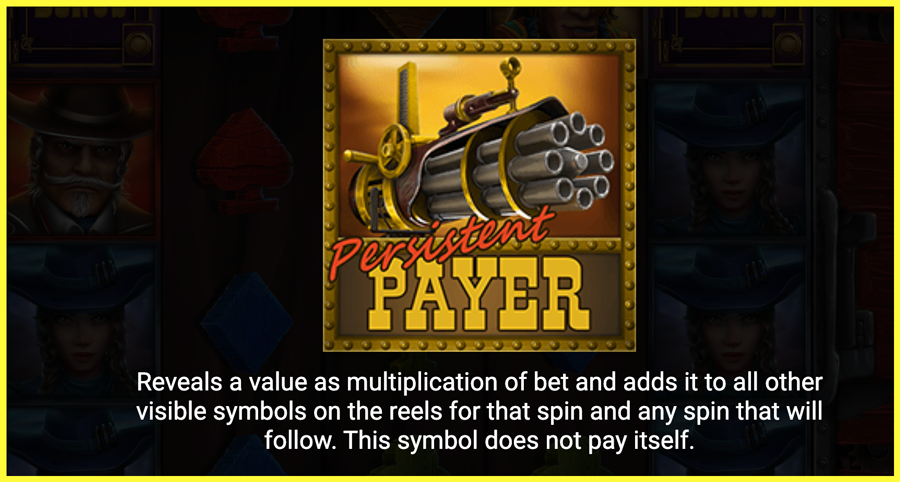 The Persistent Payer reveals a value as a multiplication of your bet and adds it to all other visible symbols on the reels for that spin and any spin that will follow. This symbol does not pay itself but then it doesn’t need too! 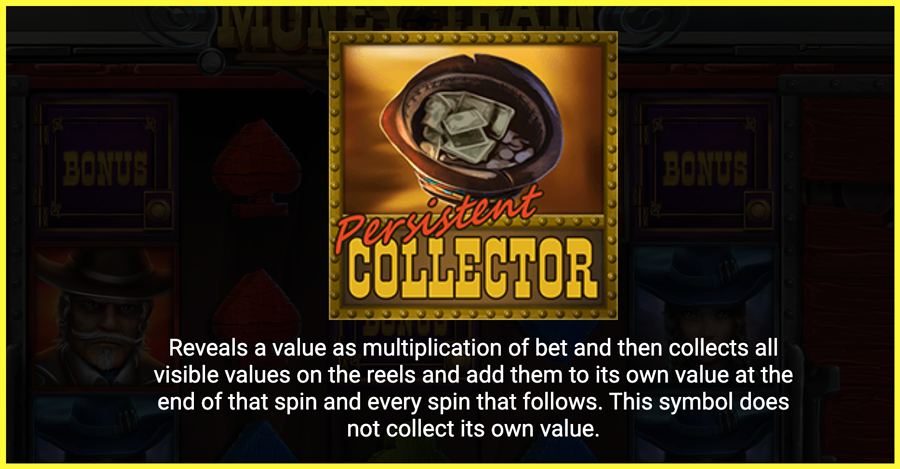 The Persistent Collector reveals a value as a multiplication of your bet and then collects all visible values on the reels and add them to its own value at the end of that spin and every spin that follows. This symbol does not collect its own value.

The paytable in Money Train is dynamic and changes with your bet size, the examples below are based on a £1 spin.

Starting with the low paying symbols we have the blue diamond paying 3x for a 5 of a kind, the green club pays 3.5x, the wooden heart pays 4x and the red spade pays 5x your total bet for a full line. 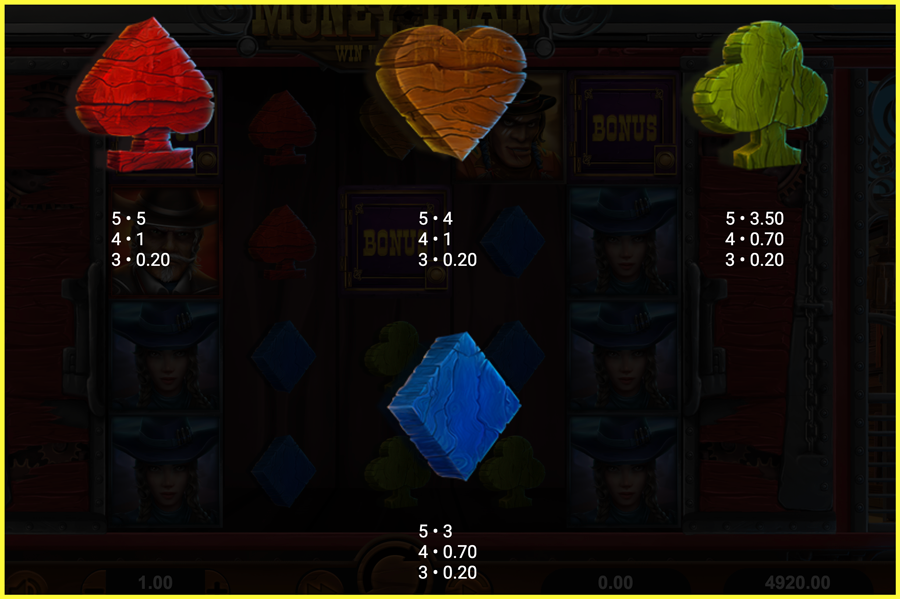 Moving onto the premium symbols we have the blue cowgirl who pays 8x for a full line, the green cowboy pays 9x, the Indian pays 10x and the top symbol pays 20x for a full line, all symbols are stacked and so are the wilds which means you could potentially win 800x your stake on 1 spin in the base game, its not 20,000x admittedly but its better than nothing, literally! 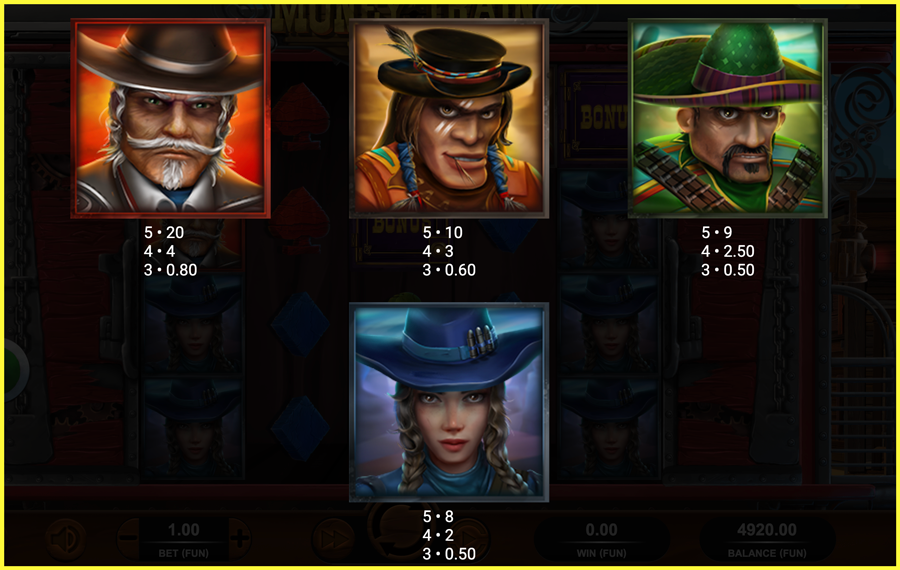 Money Train has an RTP of 96.2% and its safely in the high variance category. I’ve played this now around 4 or 5 times and I would say I’ve seen the best part of 50 bonuses on various stakes and I’ve not won more than 300x my stake, I have however seen countless bonus rounds where I don’t get anywhere near the 80x buy in so it appears to be very hit and miss, as much so as Bonanza for example just without the potential. Now most games I would try to land the bonus naturally with scatters but the base game can be so quiet on Money Train that it just doesn’t feel like its the best bang for your buck.

I would still say it’s a very addictive bonus round as once you understand how the different symbols work and what they do it raises the suspense when you get a nice start, but its certainly a game to treat with respect and not chase or tilt on or you will have a balance of zero in no time! I’ve put a promo video below where you can see it pay, you’ll also notice the max win is capped to 20,000x when the win was over double that. Money Train, yes, Money Drain, potentially, ride carefully cowboys and cowgirls!