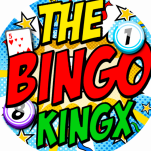 By TheBingoKingx, March 13 in Off Topic