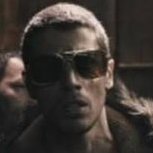 By Rocknrolla, September 23 in Boxing/MMA