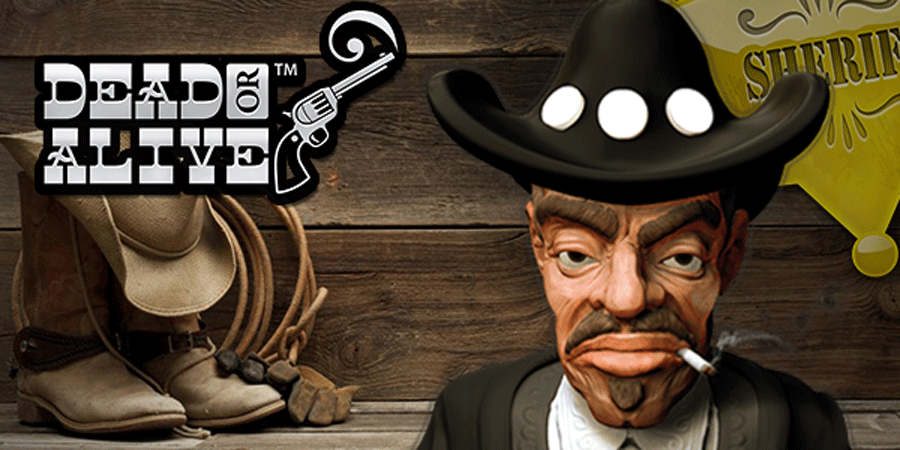 Overview of Dead or Alive Slot

The slot machine Dead or Alive by Netent has long been one of the most highly played slots and is considered a classic as it has the ability to churn out huge wins if you hit the 5 scatter trigger or elusive wild line in the feature. It can happily pay hundreds of pounds on a minimum bet which is why it has such appeal amongst new players and old players alike. It is often banned from welcome and/or deposit bonuses at many casinos purely because of it’s potential.

Dead or Alive is a wild west themed 5 reel 3 symbol per reel game and has 9 paylines, it features famous real life gunslingers on each of the reels wild cards, it is a basic slot but none the less well presented slot. In the flash version of the game it can be played with as little as 1 line and anywhere in between but in the newer revamped HTML5 version it can only be played at the full 9 lines. There are 4 play levels and coin value starts at 1p and go up to 50p with 2p, 5p, 10p and 20p in between. In layman terms this means you can bet as little as 9p per spin or up to a max of £18 per spin.

There are 10 different symbols in the game, 5 premium and 5 low paying.

The payable shows coins won for 3,4 and 5 of a kind of each symbol this is translated to the sheriffs badge paying the most at 111x stake, pistols paying 83x, hats paying 44x, boots paying 33x and the whiskey glasses pay 22x of course you could also get 5 wilds in the base game which would pay 1500 coins which translates to 166x your stake.

The lower paying symbols pay from 11x to 2.7x for a 5 of a kind and are not really worth talking about, it’s the premium symbols that we want and of course the wilds!

Now’s where it gets exciting, the free spins on this game are triggered by getting 3,4 or 5 scatter symbols across the 5 reels and if you’re lucky enough to land the 5 scatters you will be rewarded with 2500x your stake before the free spins begin! If you land 3 scatters you get 4x stake, 4 scatters you get 25x stake and for 2 scatters you get 2x stake. The feature awards 12 free spins at a 2x bet multiplier and the wilds are all sticky for the duration of the feature, the scatters are removed from the reels during the bonus but if you land at least 1 wild on each reel you also get 5 extra spins once the 12 initial spins have finished. The wilds you have stuck stay for the extra 5 spins which if you have them on a payline is where the big money is won! 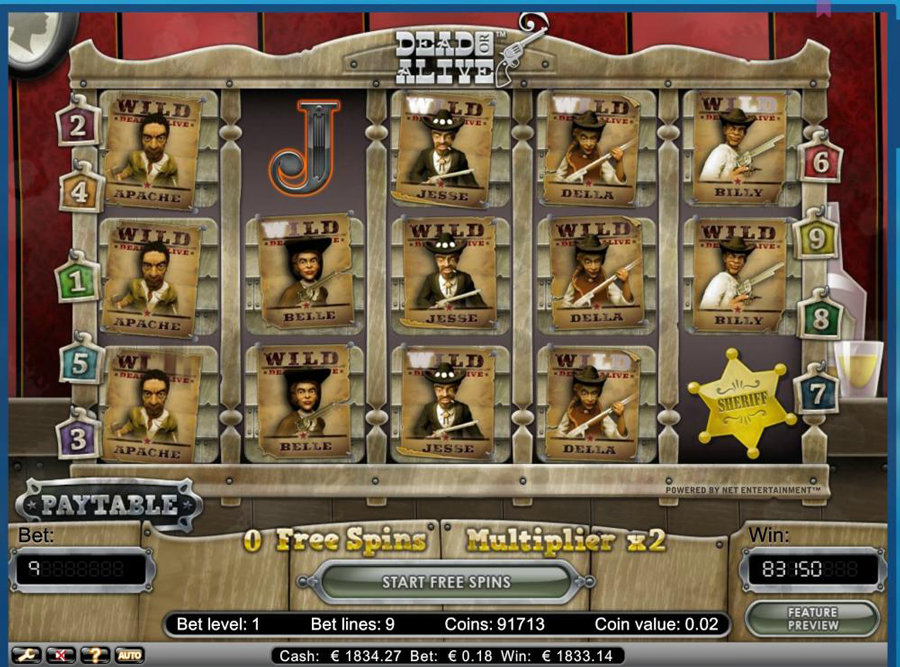 The above image is from a lucky player that won over 10’000 stake on an 18c bet so you can see how valuable the wilds are in the free spins!

Final Thoughts On Dead Or Alive

The slot has a very respectable RTP of 96.8%, it is of course a high variance machine but in my experience it tends to play more like a medium variance machine in the base game and recycle’s your balance with many small wins and the occasional 5 of a kind for larger wins to keep you spinning, of course any slot can have its cold and hot streaks and dead or alive is no exception!

It is a slot I personally will play from time to time for as long as I can, it would be sorely missed by the community if it ever were to be pulled and even has it’s own cult of players that grind through millions of spins in search of a bigger win than the last and play no other game! I would give the game a solid 9/10 even though it has destroyed my bankroll many times!

My advice would be to treat the game with respect when playing as the feature can be hard to land but it’s always worth a few spins if you feel lucky and don’t forget, if your playing with a bonus make sure you check the terms as this game is often not allowed with bonus funds, good luck!

Are there any other type of similar games with the same skin?