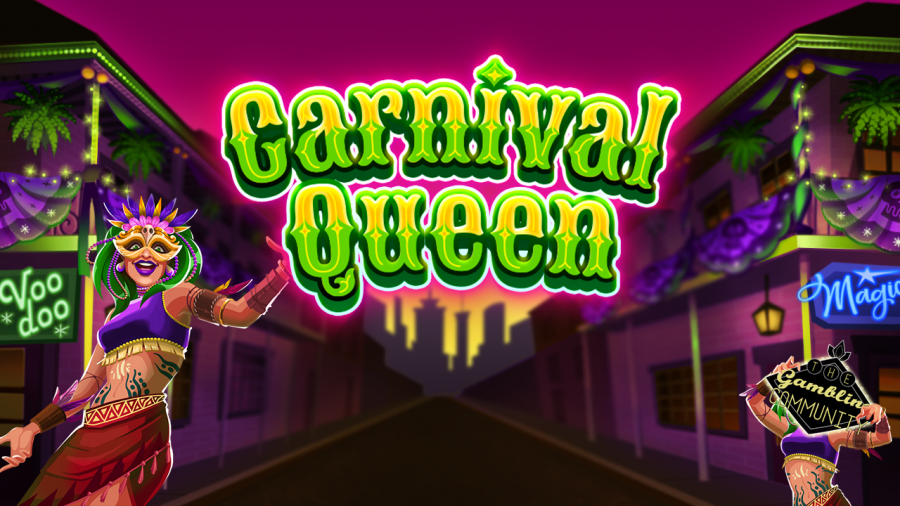 Carnival Queen is the latest addition from the Thunderkick team, the developers were keen to tell me all about it at the ICE show this year and so Iv decided to review it and give it a proper workout, apparently it has a hint of Bonanza mixed with the great graphics and maths models that Thunderkick design in house, with that in mind lets jump straight in and see how it plays.

Carnival Queen has a 6 reel by 4 row setup and it pays all ways up to 4096 ways, basically the same as a 243 way slot but with an extra reel just like Raging Rhino. The mechanics of the base game are based on avalanches, each time you get a win the multiplier increases by 1 and more symbols drop down, this continues until there are no more wins, the multiplier then resets for a new spin, so its basically the same mechanic as a Bonanza or Extra Chilli bonus round but without a sticky multiplier.

The main feature in Carnival Queen is the free spin round which you win for landing 3 or more scatters, the entry feature is 12 spins and you get 4 extra spins for each additional scatter giving you the opportunity to start with 24 spins, the multiplier also sticks in the feature between spins like Bonanza and on top of this there is another little extra! 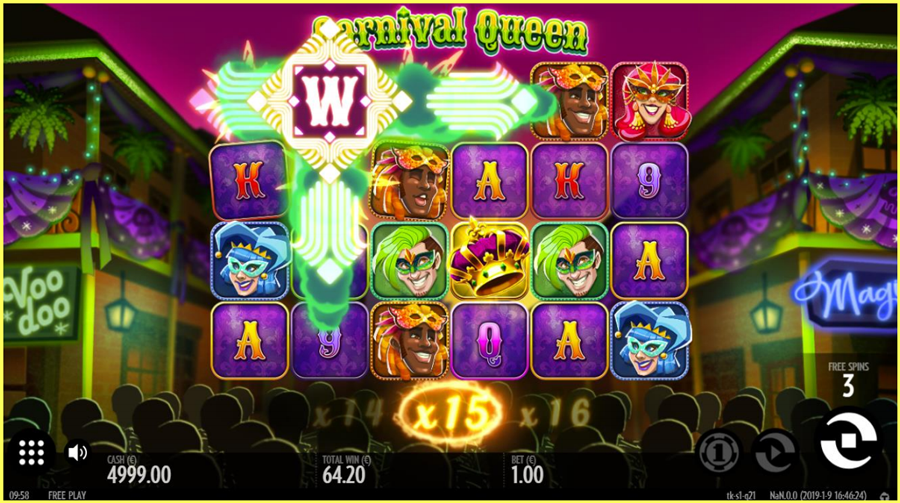 The wild symbol explodes if its not used in a winning combination and it will destroy all symbols parallel to it horizontally and vertically as shown in the picture above. This then causes more cascades and the multiplier increases, you can also re-trigger an unlimited amount of times and you only need 2 scatters to get an extra 3 spins, it obviously has huge potential as you can imagine and the maximum win had to be capped at 22,700 times your stake due to the insane potential of the bonus round.

The Paytable in Carnival Queen is dynamic and adjusts with your bet size, the below is based on a £1 spin and starting with the lowest symbol we have the 9’s paying 1x for a full way, 10’s pay 1.1x, J’s pay 1.2x, the Q’s pay 1.3x, the K’s pay 1.5x and the A’s pay 1.7x, bear in mind all symbols are stacked and then add a huge multiplier on and you can see why the amounts for the base wins are so small. 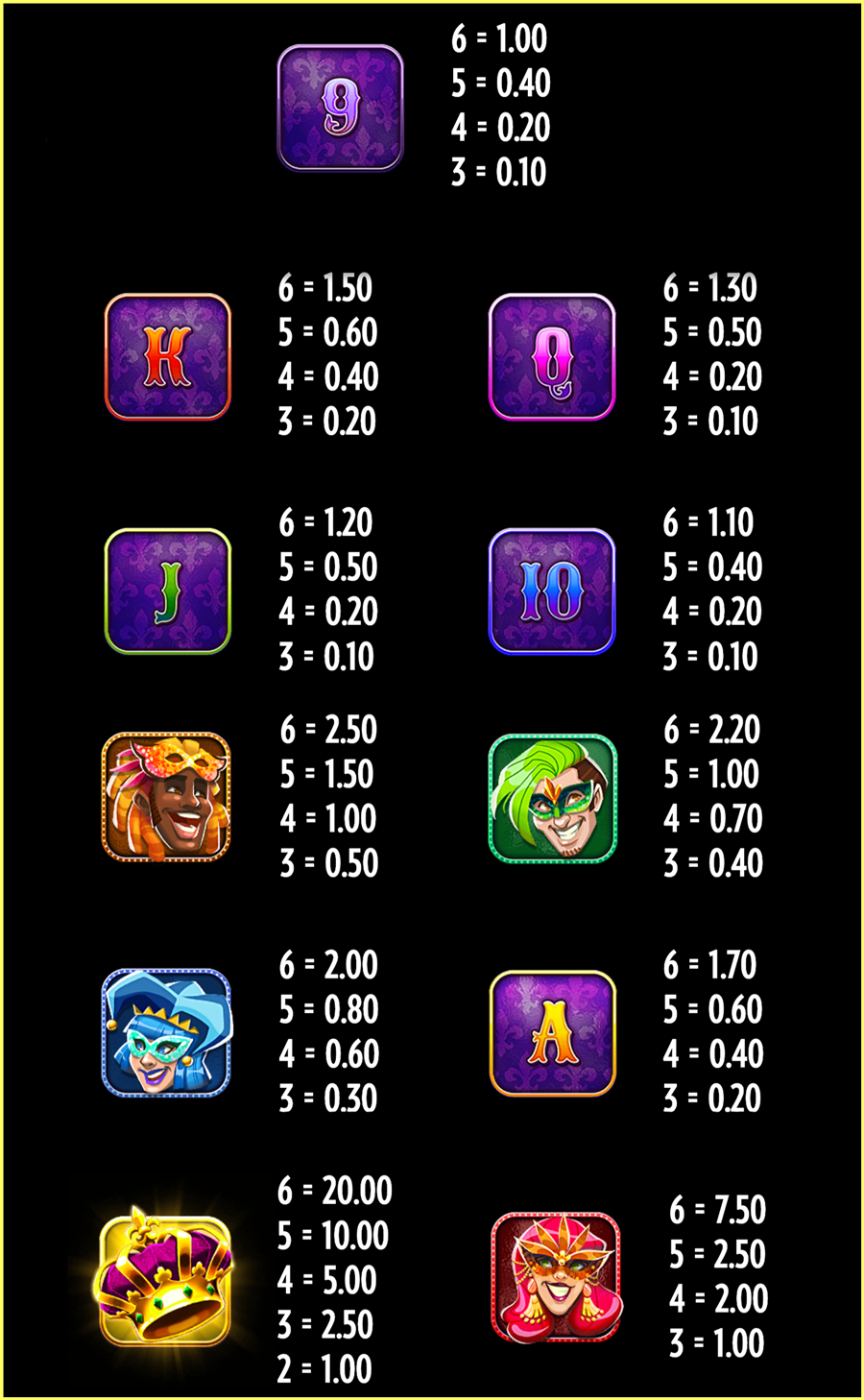 Moving onto the premium symbols we have the blue symbol paying 2x, the green pays 2.2x and the orange pays 2.5x, the red pays a big premium of 7.5x and the top symbol of the crown pays an even bigger premium of 20x for a full way, these are the symbols were looking for in the bonus with a big multiplier.

Carnival Queen has an RTP of 96.1% and in the data sheet for the game the variance is listed at 47, what does 47 mean? The honest answer is I don’t know but Pink Elephants has a variance of 101 so I would imagine they are listing this game as medium variance. In my 1000 or so spins testing the game, both with real and demo money I would of said the game is super high variance, in fact it felt as hard as Bonanza to get the bonus round on, the strange thing is it doesn’t feel that hard to get on Pink Elephants yet its rated twice as volatile, go figure!

Overall the game was enjoyable and it’s definitely one of those games you want to have a 100 spins on and then maybe move on if it seems dead, if it doesn’t and you hit a bonus round you could be in for a nice treat! Thanks for reading and if you fancy a go theres a link below to a TGC trusted casino, good luck.

After publishing this review I played Carnival Queen for real money that evening, the bonus landed within 50 spins and it paid over 330x stake, I had a 10x multiplier and hit some 10’s all the way across, the game definitely has the potential for some ultra big wins! 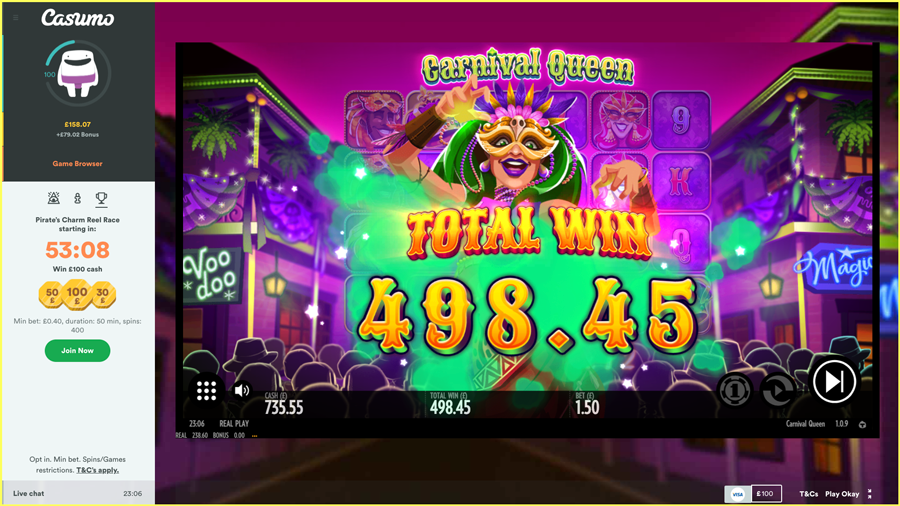